NVIDIA today announced that a handful of VR titles would soon add support for DLSS, providing a significant performance boost for anyone with a compatible GeForce GPU. No Mans Sky, Wrench, and Into The Radius will offer DLSS support in upcoming updates.

NVIDIA's DLSS, or Deep Learning Super Sampling, is a process to increase performance at high resolutions by rendering at a lower resolution and upscaling the image with a machine learning algorithm. DLSS gives impressive performance advantages when gaming at 4K and higher. In September, NVIDIA offered DLSS to VR developers to help them improve the performance and visual fidelity of their games. We're about to begin seeing the fruits of those efforts finally.

Hello Games, creators of No Mans Sky, is one of the first developers to implement DLSS in a VR-supported game. DLSS is coming to No Man's Sky in the next update, which can nearly double the framerate on a 4K monitor. The title also supports VR headsets, and the DLSS feature will extend to the fully immersive version of the game. NVIDIA said the DLSS doubles the game's performance in VR. 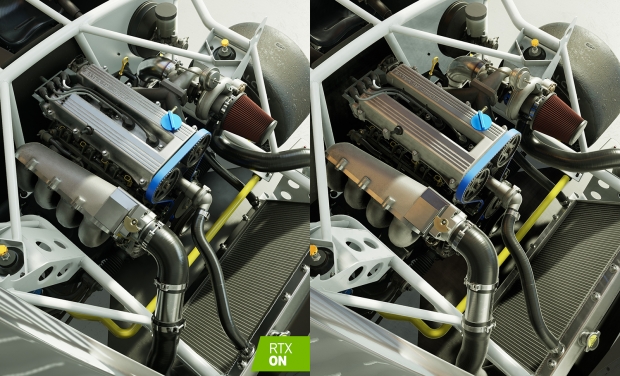 Into The Radius by CM Games, is a first-person single-player survival shooter, which according to the developer, was created "exclusively for premium virtual reality headsets." CM Games will implement DLSS in an upcoming update, which should dramatically improve the experience for many gamers. NVIDIA said that DLSS in Into The Radius provides a "noticeable improvement to anti-aliasing, which greatly reduces shimmering and stair-stepping on objects and foliage, further enhancing image quality and immersion."

Missing Digit, the developer behind Wrench, has also added DLSS support to its game in both the desktop and VR implementations. DLSS enables better image quality in the headset, giving you the ability to see the details of car parts with better clarity. In 4K, DLSS more than doubles the framerate in Wrench. In VR, DLSS gives the game an 80% performance boost, which NVIDIA said is enough to enable RTX ray tracing features in VR.

Currently, DLSS is only supported by Unreal Engine but Unity is working to add DLSS support by the end of the year.