Well, I don't know how much clearer we can get before we have city-sized ships hovering above our cities and Will Smith walks outside for his daily newspaper... but here we are, right on CNN

CNN's Chris Cuomo hosted two retired US Navy officers (Sean Cahil, retired US Navy Chief Master-at-Arms and Christopher Mellon, the former Deputy Assistant Secretary of Defense for Intelligence during the Clinton and George W. Bush presidencies) who talked about UFOs (or UAPs as the military refers to them) that have technology that is 100 to 1000 years ahead of the very best that the human race has to offer. This isn't Alex Jones or something, they are respected men in some of the very highest positions of their industry.

Retired US Navy Chief Master-at-Arms, Sean Cahil, said: "First of all the aircraft had zero control surfaces, it had no means of propulsion that we could detect, it moved at hyper-sonic velocities and it preceded the pilots to their cap point, so it seemed to have some knowledge of where the pilots were headed ahead of time. We don't possess those abilities to do that in our arsenals at the moment".

The UAP that Cahil is referring to is the "Tic-Tac" and that we (the human race and our collective military strength) cannot fight against. Cahil said: "The technology that we witnessed with the Tic-Tac was something we would not have been able to defend our forces against at the time".

So an ex-US Navy officer talks about UAPs and the ability of "it seemed to have some knowledge of where the pilots were headed ahead of time" is like placing a stick of dynamite to the lid of Pandora's Box and putting your fingers in your ears. Ka-boom. 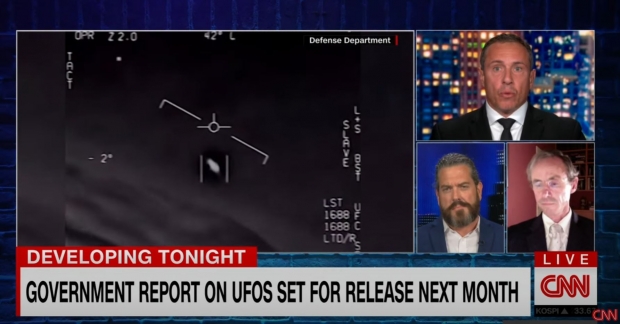 Cahil continued: "They're very capable - in some cases more capable of anything in our own inventory. This has been going on for years. The truth is just emerging".

At the end of the video Cuomo asked Mellon "why don't they talk to us" and then Mellon kinda just casually says "if they're that smart, what would they have to learn from us. When you go to the zoo, do you talk to the animals?"

Thanks for the reassurance, guys.