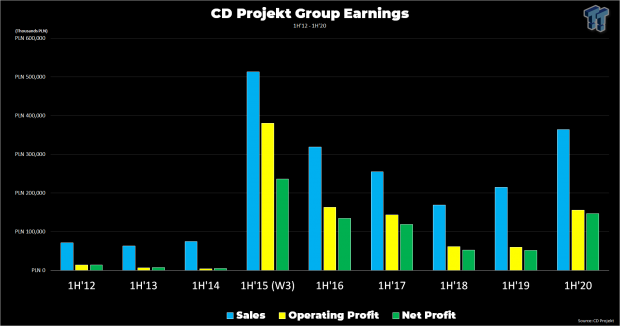 The Witcher 3, which has been re-released three times now (once in 2015, again in 2016 as the complete edition, and once more on Switch), was the biggest contributor to earnings.

"In the first half of 2020 the CD PROJEKT Group's results were primarily affected by sales of The Witcher 3: Wild Hunt and its expansions (Hearts of Stone and Blood and Wine), sold separately as well as in the Game of the Year Edition bundle for the PC, Xbox One, PS4 and Nintendo Switch,"reads the report.

In H1'20, CDPR spent 114.27 million PLN on dev projects, most of which was for Cyberpunk 2077. CDPR is also spending big on new projects and development of new tech. CDPR has spent 448.51 million PLN (roughly $121 million) on in-development projects to date. 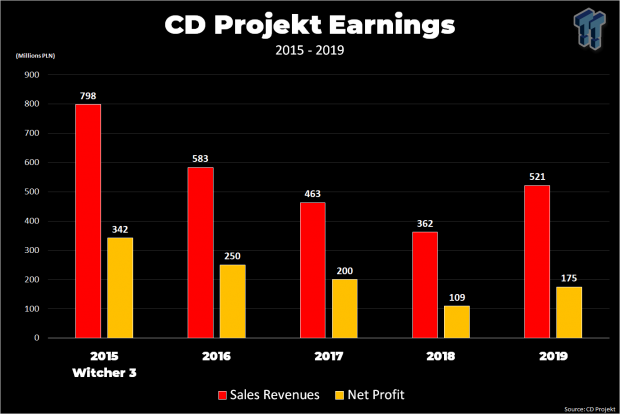 2020 will be likely be CD Projekt RED's biggest year yet.

The company will release Cyberpunk 2077 in November, the first new release in five years. Up until now CDPR has relied on The Witcher 3 to buffer sales by strategically re-releasing the game across multiple platforms in various formats. History says that every time CDPR releases a new game, sales and profits skyrocket.

Case in point: CDPR's earnings hit historic highs when The Witcher 3 released in May 2015.

This year stands to beat The Witcher 3's historic launch for two big reasons: Cyberpunk 2077's launch, and another re-release of The Witcher 3.

The company hasn't outlined total-year guidance, but expect 2020 to be astronomical for CD Projekt RED.