Jedi: Fallen Order could restore balance to the galaxy of Star Wars games. Typically dominated by grindy service games like Battlefront, Respawn's new game is a singleplayer-only adventure that combines Uncharted's exploration and environmental interactivity with Sekiro's suave and stylish swordplay, and a hint of Dark Souls rolling and dodging thrown in for good measure. It's described as a "Jedi power fantasy" by Respawn and takes place in a unique timeline between Episodes III and IV when the Jedi were being ruthlessly hunted down and slaughtered.

Now Respawn says the game has gone gold, meaning it's mastered and ready to ship to gamers across the globe. We'll probably see a few updates released here and there, but the core experience is intact. 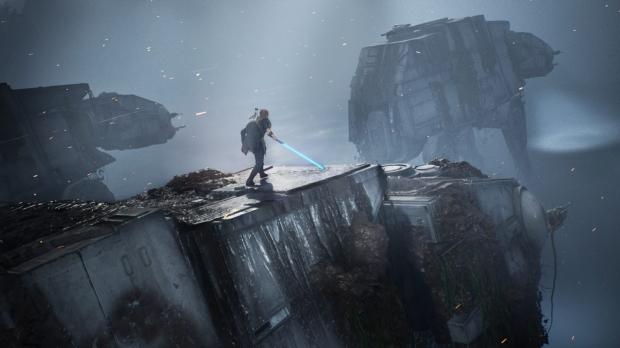 Everything we've seen and heard so far of Jedi: Fallen Order paints it as something unique. It has cinematic action sequences that blend with careful, strategic combat, and lots of exploration akin to Metroidvania. Players will accrue Force powers and build up Padawan Cal Kestis' abilities over time, all while unraveling secrets to the Jedi Order and keeping the Rebellion's flame alive in the process.

Respawn has been developing the game since 2014, and we've been writing about it since it was announced way back in 2016. God of War III director Stig Asmussen joined Respawn to work on the project, and Fallout: New Vegas writer Chris Avellone jumped in to help write the story.

Combined with Respawn's penchant for chaotic and memorable over-the-top action, Jedi: Fallen Order could be pretty explosive when it releases next month on November 15, 2019 on PS4, Xbox One, and PC.

A galaxy-spanning adventure awaits in Star Wars Jedi: Fallen Order, a new third-person action-adventure title from Respawn Entertainment. This narratively driven, single-player game puts you in the role of a Jedi Padawan who narrowly escaped the purge of Order 66 following the events of Episode 3: Revenge of the Sith. On a quest to rebuild the Jedi Order, you must pick up the pieces of your shattered past to complete your training, develop new powerful Force abilities and master the art of the iconic lightsaber - all while staying one step ahead of the Empire and its deadly Inquisitors.