As exposed in today's new gameplay reveal, Jedi: Fallen Order has all the major ingredients for a delicious Star Wars dish. There's sprawling worlds complete with unique flora and fauna that bring new life to the Star Wars universe, massive Imperial setpieces like hulking AT-ATs and nefarious refineries sucking the natural resources from planets, a new "thoughtful combat" system with tactical Force power action, and a story-driven adventure through the heart of rebuilding the Jedi Order. But the game also borrows from other familiar franchises too, namely the adventure-fueled exploration of Uncharted.

Players will do lots of exploring across the game's various planets, wall-running across cliffs and Imperial fortresses, swinging on vines, and using force powers to unlock secret paths and shortcuts. Many of the environment setpieces can be interacted with Force powers or via BD-1's hacking skills. There's a strong emphasis on Uncharted-like traversal and mystery throughout the gameplay, as if secrets lay in wait behind a corner--perhaps an old dusty Jedi tome full of knowledge or a skill power up. Like Nathan Drake, Cal will jump from ledge to ledge in death-defying feats of agility, climb steep areas, and wall-hop to access areas. 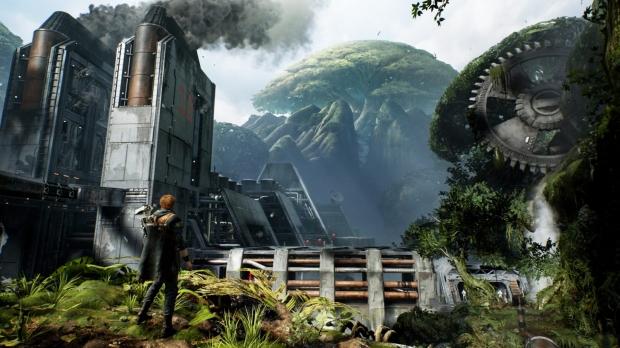 Jedi: Fallen Order will take players to many exotic planets like the Wookie homeworld of Kashyyk.

This all reminds us of a particular cancelled Star Wars game that was in development for years. Visceral's cancelled Project Ragtag game was described as Uncharted meets Star Wars by Amy Hennig, who directed the game, and Rogue One writer Gary Whitta. We're curious how much of Ragtag was recycled into Respawn's Jedi: Fallen Order.

When it comes to combat, Fallen Order reminds me of a mixture of many games. Jedi Knight's third-person lightsaber combat is the first that comes to mind, and there's also a mixture of Dark Souls and a little bit of Sekiro thrown in there too. Cal can roll-dodge and jump out of attacks but the animations aren't that smooth, bringing a very lumbered Dark Souls-y feel.

Respawn says combat will be "easy to pick up but hard to master," and admittedly lightsaber battles look a bit clunky if not interesting.

The best part of Jedi: Fallen Order is how players can thrown Force powers into the mix for maximum carnage.

In the gameplay demo we routinely see the player force pull enemies and strike them down with a brutal lightsaber blow. The new time-freezing Force slow power affords some awesome opportunities for chaos; you can freeze an enemy in place, force grab another Stormtrooper, and toss him into his friend like a human bowling ball. Or even freeze a nearby hazard area, pick up an enemy with force pull, and then throw him into harm's way.

Combat looks fluid as much as it does clunky and should force players to think carefully about their actions. No info on skill-ups was confirmed, but we do know the major Force powers will include push, pull, a double-jump ability, and the new time-slowing power.

Of course agility and grace are part of combat too, albeit more-so in environment traversal. Gamers can still double-jump and run on nearby walls to evade enemies, jump and then fly down in a killing blow strike, parry attacks, and even throw their lightsaber at foes.

No Star Wars game would be complete without a good story, and Jedi: Fallen Order paints an interesting picture.

Centered around Force padawan Cal Kestis, the game takes place during the dark period when the Jedi were hunted down and massacred after Order 66. It's kind of like The Empire Strikes back, only much more daunting. Faced with impossible odds, Cal must scrounge up a resistance force and unlock the mysteries of the Jedi to ensure the Galactic Empire remains in check.

Sadly Respawn confirmed Jedi: Fallen Order is exclusively a good guy story. Gamers won't be able to switch over to the Dark Side at any point.