Respawn's big new Star Wars game gets a helping hand from one of the best writers in the business. 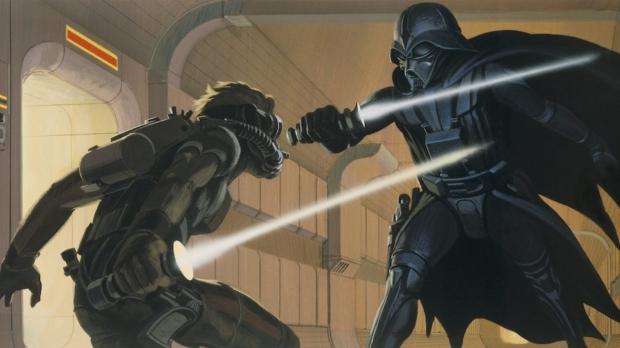 Fallout: New Vegas designer Chris Avellone is lending his storyboard prowess to Respawn's upcoming Star Wars Jedi: Fallen Order game, the dev today revealed. Given the setting, subject matter, and talent involved, Jedi: Fallen Order sounds absolutely fantastic. The game, a third-person adventure experience with what Respawn calls "larger-than-life action," takes place between Episodes III and IV when the Jedi were being hunted and executed across the galaxy. Reports indicate Jedi: Fallen Order will be similar to The Force Unleashed while staying true to canon.

Anonymous sources say Jedi: Fallen Order follows the story of Cal, a padawan who escaped the massacre of Order 66, and takes place five years after The Revenge of the Sith.

With Avellone at the helm, we should see Respawn make good on its promise to focus strongly on engaging stories and narrative-driven character development.

"It doesn't matter if it's in first person. The Star Wars game is a third-person action game. It's going to be more about the character and their experiences. You can see them and identify with them a little differently than you can in a first-person game where it's all about seeing it through your own eyes. But it still has to be about feel and fun," Respawn's Vince Zampella said in 2016.

There's lots of pressure on Respawn for Jedi: Fallen Order to be good. The upcoming Jedi adventure is one of the few Star Wars games that hasn't been cancelled in development stages. In a very real sense the game has to restore the balance to the Force of Star Wars games.

In 2017, EA cancelled Visceral's ambitious Project Ragtag adventure game (which was described as "Star Wars Uncharted") so it could pivot more towards live service titles.

Amy Hennig, who led development of Ragtag, said the project was very far in development before it was killed and a lot of headway was made in the Frostbite engine. Ragtag aimed to capture the magic of the films by recreating classic sci-fi themes--the goal was to make people feel like they were "playing a Star Wars movie."

Then in 2019 EA cancelled Project Orca, a Star Wars game built on the bones of Project Ragtag. Orca was an expansive open-world game aimed at tapping EA's live service model, but the publisher scrapped it so EA Vancouver could focus on a smaller project that would release earlier.

Jedi: Fallen Order could release sometime in November, reports say, and EA will formally reveal the game next month during the Star Wars celebration between April 11-15, 2019. We'll have all the latest info from the show right here.