Editor's Note: These impressions are based on a PlayStation 4 copy of the game which we received from the publisher. Our upcoming review will also be based on this same platform.

Watch Dogs 2 is a breath of fresh air. It's rebellious, vivacious, colorful, and overall, it feels alive. Ubisoft has gone great lengths to make the experience actually fun to play, and genuinely makes players feel like they're a kid on a playground.

We get the tools to play how we want and hack the entire world around us, from traffic signals to taking control of self-driving cars and even making NPC's phones explode like Samsung's ill-fated Note 7.

You get nifty gadgets like the RC Jumper and a flyable drone, which can zoom around and hack the interconnected world with ease.

For some reason, some of the PS4 screenshots look really bad. Maybe it's because I was in motion while taking them, or perhaps it has something to do with the game and how it captures certain scenes.

For whatever reason, the screens don't actually reflect the in-game performance. This is pretty bizarre, and I have to say that some of these screenshots are pretty bad in terms of quality. I can say that the game doesn't look this bad on while you're playing on an HDTV.

This graphical disparity may be caused by the in-game camera system, which can be used to take pictures while in-game. Sadly, these images apparently can't be downloaded or shared, so I used the PS4's screenshot feature to take these images.

The worst of the images seem to be caused by the drone's flight: I took the below image while flying around with the drone, but used the PS4 screenshot feature instead of the game's built-in camera to snap the pic.

This isn't me making excuses or trying to defend Ubisoft (trust me, I was just as annoyed by the Watch Dogs bullshots as you guys were) but me trying to tell it how it is. 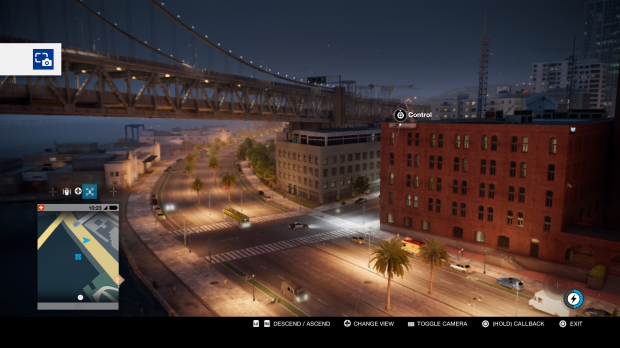 The graphics on PS4 aren't bad, but they're not great. That isn't really an issue, though, because the game is jam-packed with such rich and vibrant visuals that you're constantly immersed.

That's not to say Ubisoft is trying to distract you from the performance or graphics with flashy visuals; the world is inherently dynamic and brilliant in its complexity, making the not-so-stellar graphics a non-important issue. 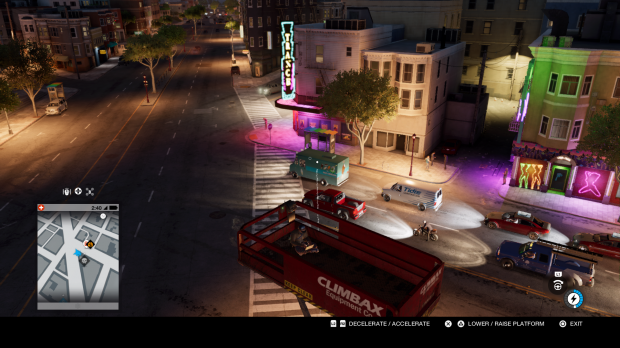 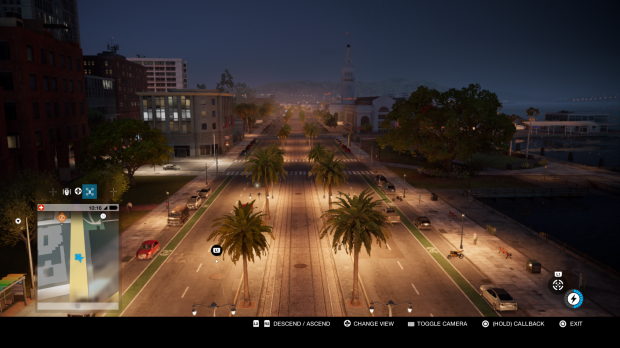 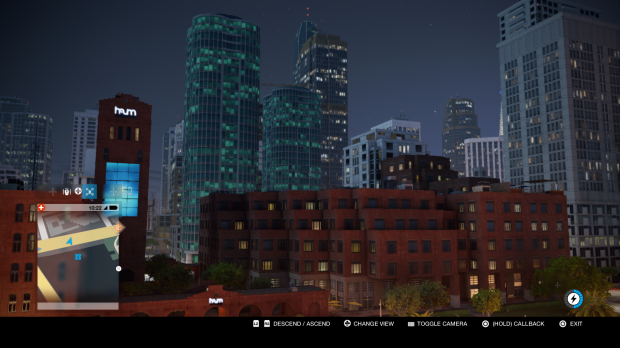 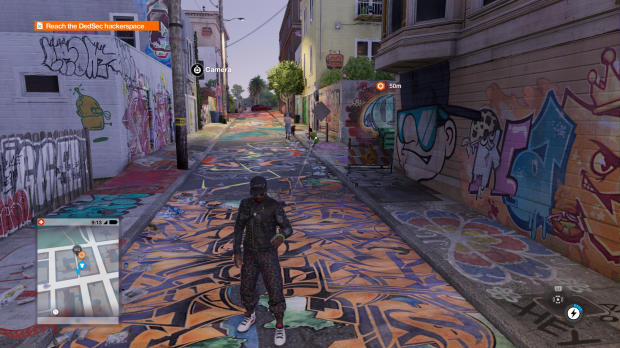 I haven't had any problems with frame rates on PS4, despite the reports that Watch Dogs 2 runs at sub-30FPS at times on the console. Ubisoft has gone to great lengths to streamline the game as much as possible on outdated hardware, and it's overall quite solid in terms of performance.

Gameplay is overall fluid and responsive, but you will have to get used to the controls. The same snap-based cover system is in play, allowing players to keep around corners and cover to fire at baddies. You can use hacking strategies to take out foes like a ghost, or run in guns a blazing--or even toss some shock grenades to knock out whole groups of enemies. 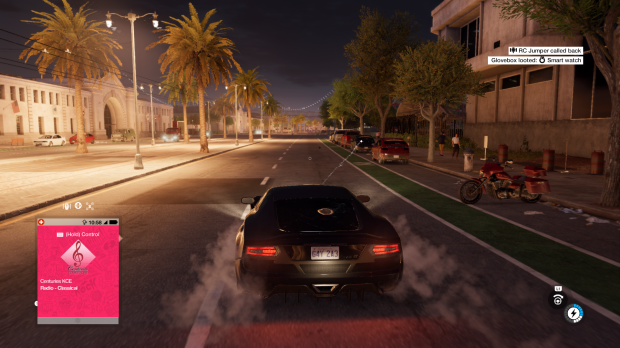 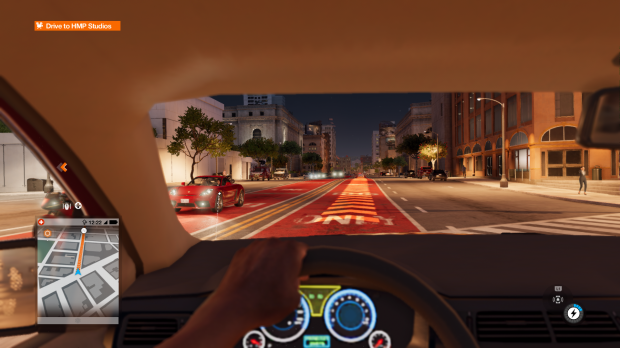 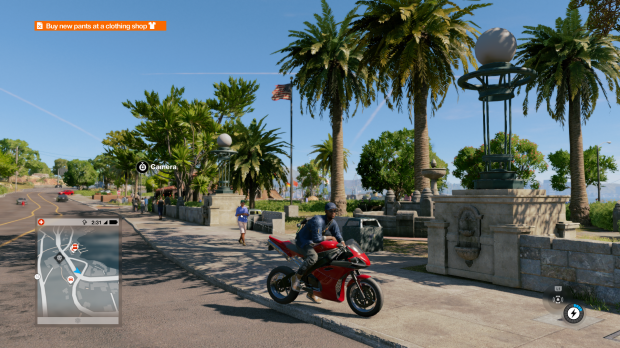 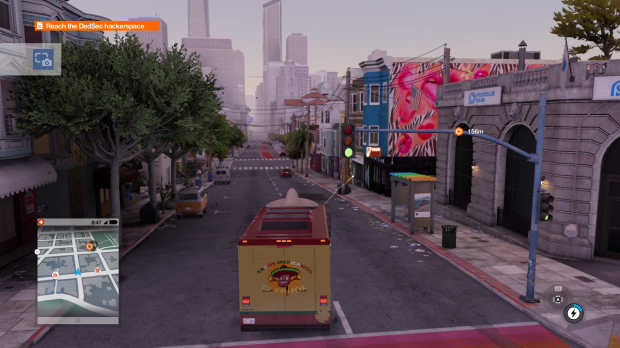 Driving is better than the original, but not by much. Some cars feel clunky and awkward. This goes double for the Cyber Driver smartcar, which is supposed to be like the game's Knight Rider. There's a mission where you steal the car and have to evade police in a high-speed chase...and holy hell, the thing was really tough to control. 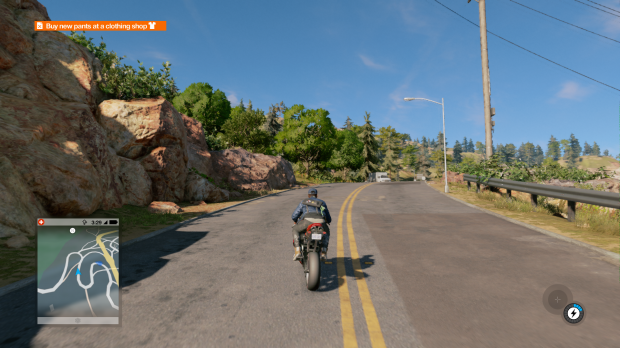 The main reason driving is so hard is because of the camera. You can control the camera with the right analog stick, and move it around to see where you're going--this is extremely useful when you're turning corners at high speeds. But the camera constantly auto-centers itself back into position, so you often have to wrestle and fight for control.

There's no option to turn off the driving camera's auto center, and it makes driving a huge pain. If you want to get around fast and easily, jump on a bike. The boats are also clunky to control, too.

The NPCs feel and look alive and real. They meander throughout the world doing basic things, from smoking to talking on their phones, high-fiving one another, and even doing their jobs like cleaning windows.

They'll even do crimes out of nowhere: I saw a lady steal a car, crash it, run out and steal another car and drive away. The cops were called, and they came in and blasted the lady in a hail of gunfire.

I also saw a woman smash her supposed boyfriend's car with a bat until it caught fire. Then it promptly blew up, killing her and my character.

Hacking these Climbax scissor lifts are basically my favorite part of the game. These things are absolutely amazing, and you can drive them around! Use them to access almost every roof in the game to find secrets, or just roam around the city and hack things from your safe mobile hideout.

Hacking in itself is basically the same: you can look through the eyes of cameras and hop to different terminals to unlock doors, hack computers for intel, hack enemies phones to make them blow up, and sabotage HVAC units and gas traps to kill off foes. 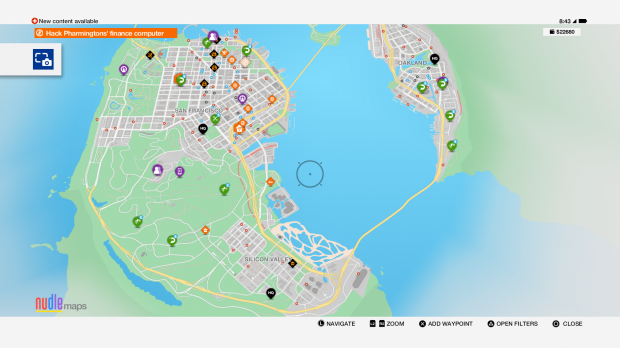 The game also has a ton of stuff to do, and the world is so dynamic that you actually want to explore it. It feels fresh and new, and you'll constantly see things that impress you and make you laugh. It's quirky, ambitious, and generally polished and streamlined enough that it mirrors a traditional Grand Theft Auto style experience...only with more anarchy and chaos thrown in.

So far I'm having a blast in Watch Dogs 2, and keep a look out for our full review that should be coming later this week. 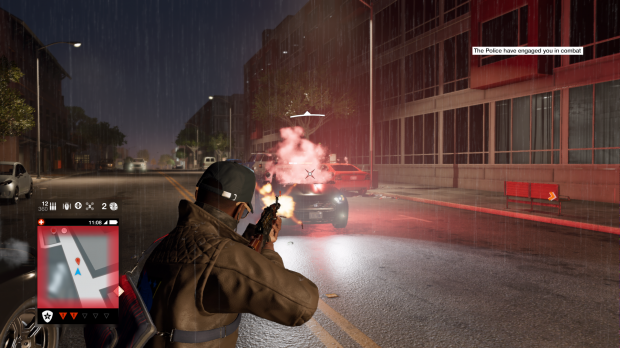 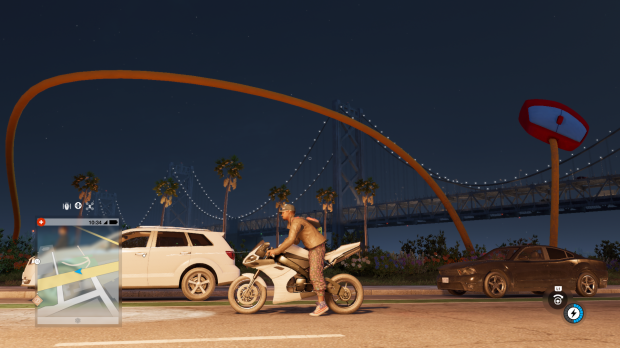 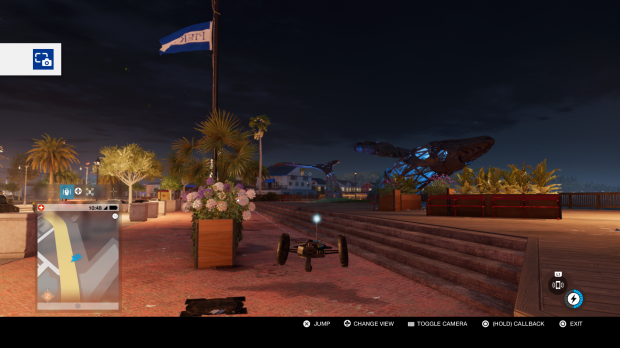 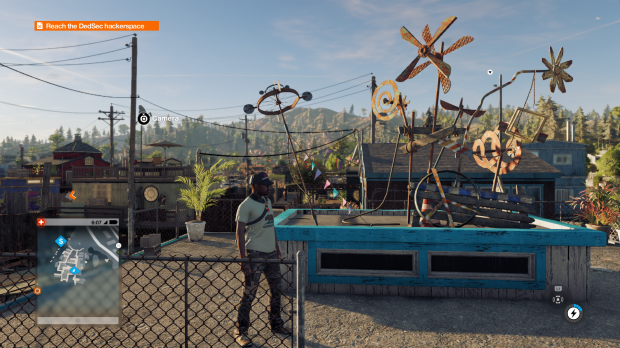 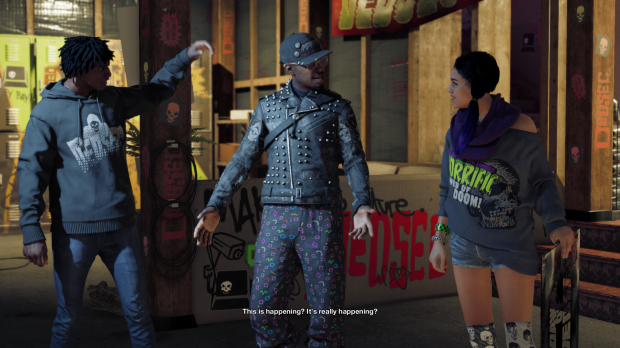 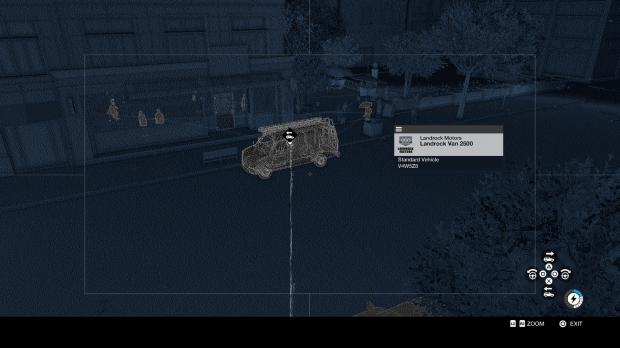 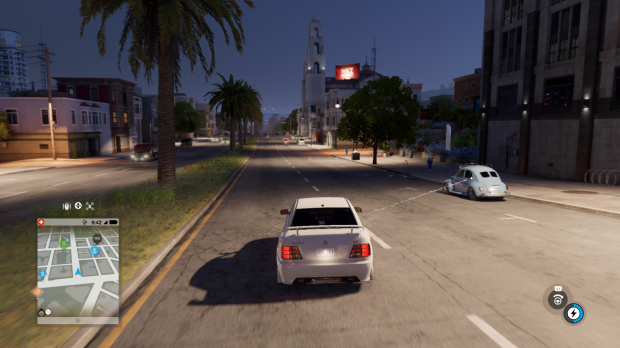 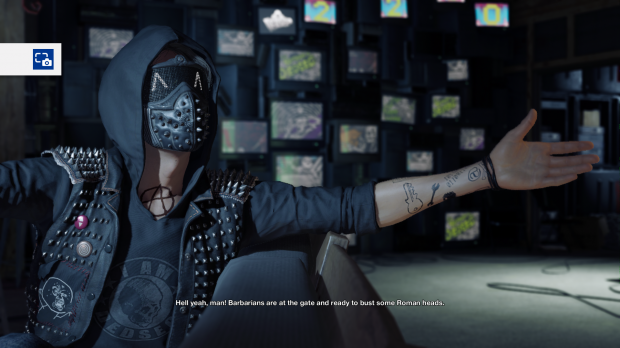 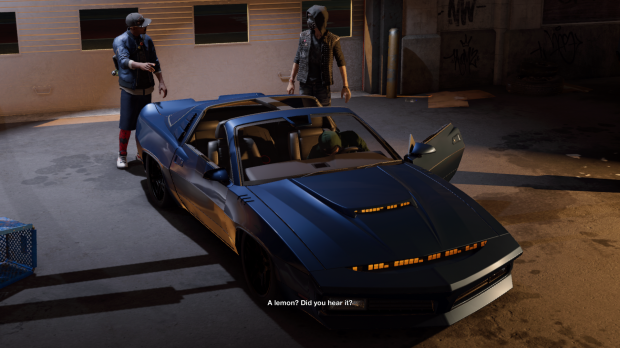 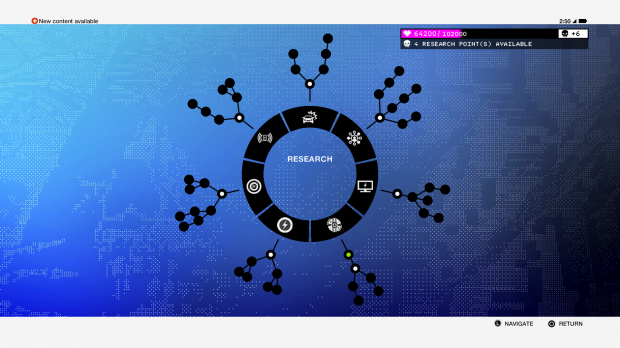 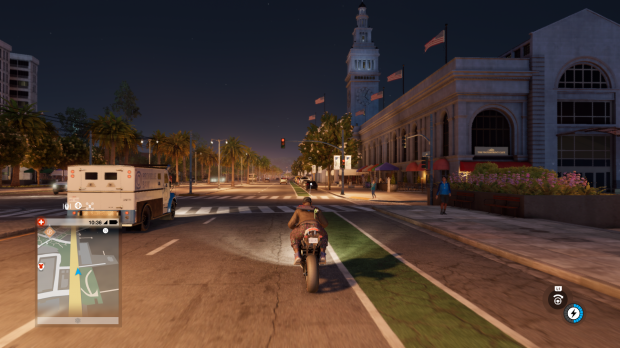 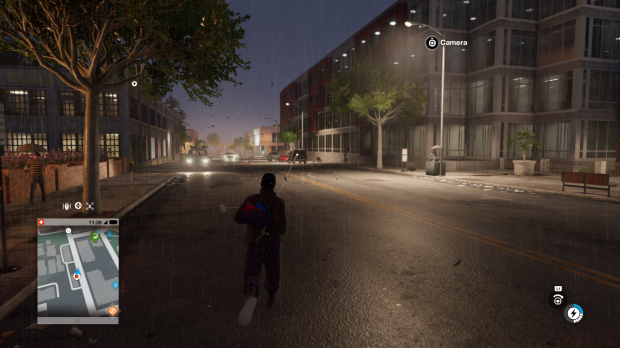 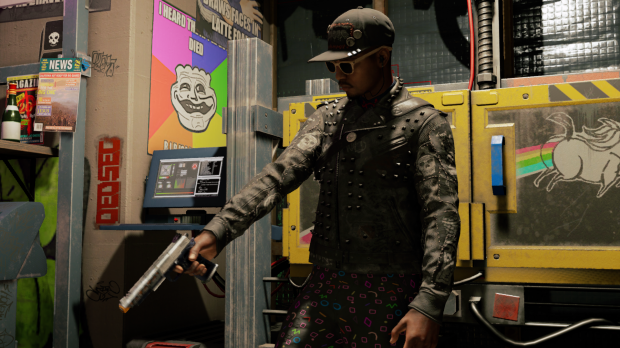 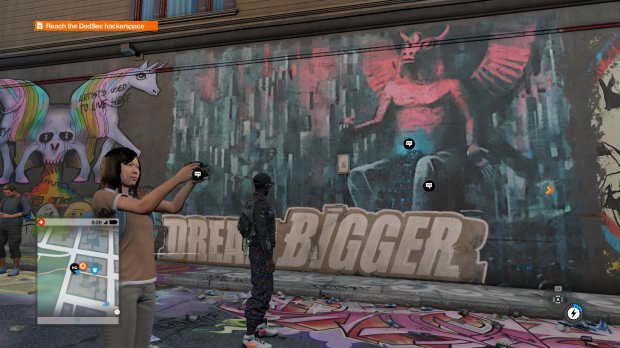 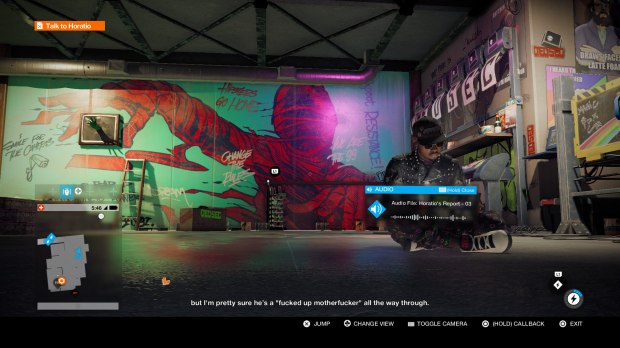