Fnatic is one of the largest professional CS:GO teams in the world, and have just had a major announcement that has seemingly come out of nowhere. The team has taken to its website, announcing that it has had four of its players leave for GODSENT, and in return has two GODSENT players join the Fnatic line up. 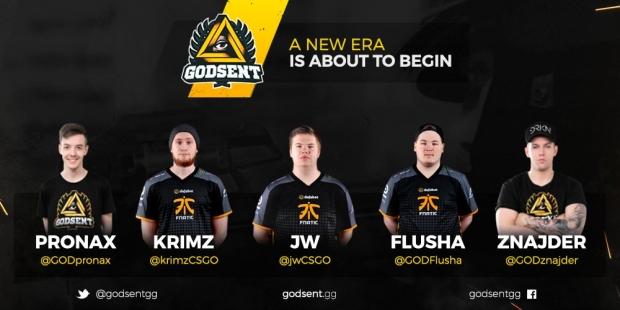 Jesper "JW" Wecksell, Freddy "KRIMZ" Johansson, and Robin "flusha" Rönnquist have left Fnatic to join GODSENT, a new Swedish clan that has some massive players on its roster. GODSENT is already home to a former Fnatic player, with Markus "pronax" Wallsten, which means GODSENT now has four of the fix Fnatic players that won back-to-back majors in the spring and summer of 2015.

Fnatic's press release says that there were issues within the team, and that these issues can "then weed their way into fundamental team dynamics, affecting the chemistry needed for success". The clan even talked about similar issues that happened before, saying: "For those that may remember a similar thing has happened before in another era of Fnatic Counterstrike. Back in 2010, the epic era of cArn dsn f0rest and getright came to an end over similar concerns, and led to the eventual reformation of NiP".

"Over the last months something similar has been brewing inside of our team, and regardless of the efforts all parties have tried to make to resolve the internal issues, it reached a point where there was a clear division within the team. Both parties felt that it was necessary to split the team up in order for future growth, and the rebuilding of the chemistry needed for success," the PR continued. The team added: "When we realised that a solution wasn't possible within Fnatic, we started looking at other possibilities that would give all players the best option for success moving forward".

The team added: "Both parties expressed the desire to stay within Fnatic and as things progressed the most viable outcome presented itself in the form of former Fnatic player Pronax, and his team, GODSENT. After a week of intense negotiations, it was agreed that JW, flusha and KRIMZ will be joining GODSENT while Fnatic welcomes Twist and Lekro in return. Our line-up will be completed by Wenton, who was already a sub for Fnatic earlier this year. Vuggo will remain a part of the team as the Head Coach".

What do you think of the change? Are you sad? Happy? Angry?