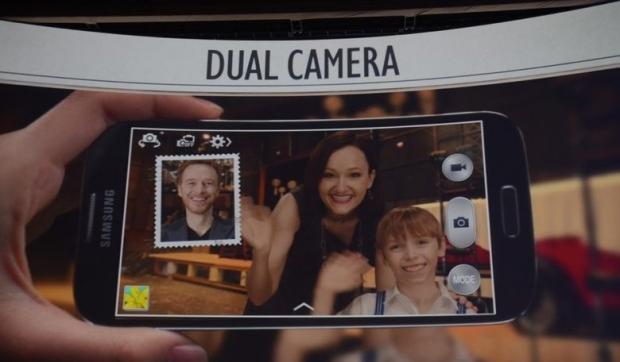 First off, the Dual Camera technology. The Galaxy S IV has software features that allow you to simultaneously record video and take pictures from the front and back cameras. The software then puts the two pictures together into a single image so that the person stuck taking the picture doesn't have to be left out.

Other cool features of the camera is the ability to turn the front-facing camera on and off while the camera is recording. Samsung has also introduced a feature that allows sound to be recorded before or after a picture is taken. Additionally, the camera is capable of taking 100 frames in four seconds. The software then picks some good pictures from those frames and combines it into a single picture. They call this feature Drama Shot.

Another cool feature is the ability to remove people from the background. The camera can take multiple pictures and use the clear parts of the background from each to remove unwanted objects that might have walked behind the subjects.

Now on to Smart Scroll. This innovative technology allows users to scroll around webpages, emails, and similar items simply by tilting the device while in the user's hand. There is no need to touch the screen or do anything with your other hand.