Using an upcoming motherboard known as the X58A-UD9 according to the ORB database, GIGABYTE were able to break the 3DMark Vantage performance world record by around 500 points and get itself right to the top of the list. GIGABYTE claimed in a recent phone call that they now have the "fastest desktop system on the planet". You can see the results at this page, which we managed to hunt down pretty easily. 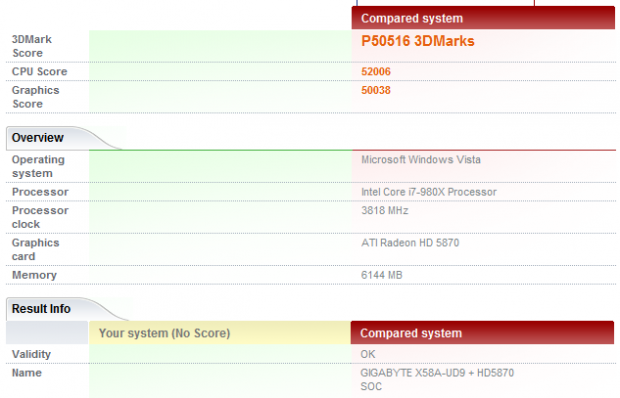 The feat was naturally achieved with Intel's latest Core i7 six-core processor, the 980X. According to the ORB database, the processor was only clocked at 3818MHz, but that was no doubt a reporting error as I'm sure plenty of high octane LN2 and overclocking was involved. The video card used was a GIGABYTE HD5870 SOC, no doubt also running at insane clock speeds. More reporting issues were noticed with the video card with no clock speeds being reported and the card supposedly only having 1MB of memory - obviously another error there, too.

So, congratulations to GIGABYTE for breaking the world record. We want to know what this new surprise UD9 motherboard is all about. Is it some special new board focused just for overclockers? One would guess that would be the case with it being used to break the Vantage world record. We'll push GIGABYTE to invite us to their HQ to take a closer look.