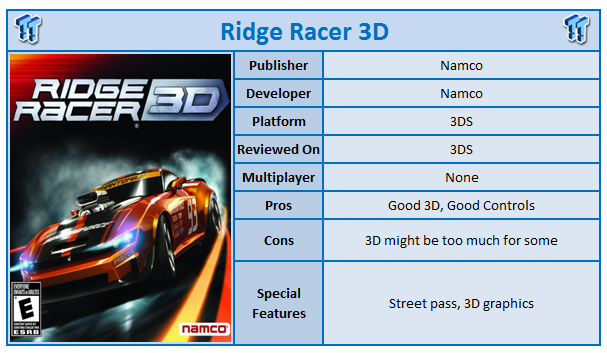 It seems that every time a new console has launched since the PlayStation that a Ridge Racer has launched with it. With the recent release of the 3DS, Ridge Racer once again made its now common appearance. However, things were different this time. Ridge Racer on a Nintendo handheld? On 3D? At launch? - We hadn't seen this before, and so there were concerns. Thankfully, for Namco, these concerns were unfounded and Ridge Racer is one of the better launch games around.

Ridge Racer is the true form of arcade racer that we have all come to know and love. You take control of a car, drive it as fast as you can and race to the finish, all the time overtaking cars. The Ridge Racer formula is in full effect in this game with powerslides being the order of the day and boost also helping you overtake the other AI cars. If you have played a Ridge Racer game before, you know what this game is all about.

Ridge Racer 3D is all about taking the series most loved tracks, putting them on the 3DS and of course putting them in 3D. The result is one of the most impressive pickup and play games on the 3DS and it suits the requirements of portability fine. You can easily load up Ridge Racer, play a track on the train or bus before closing the unit and getting on with life. It doesn't need significant time to get into and this makes it so suitable for the portable system. 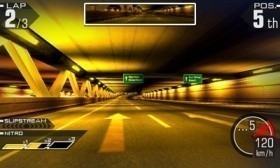 
As you would expect, there are two main modes for Ridge Racer; a career mode where you can take on progressively difficult tracks and cars and an exhibition style mode where you choose your car and track for a one off race. One of the criticisms we have of the game is that for a significant period of time when first playing, the game is child's play. It is one of the easiest Ridge Racer games around and the challenge doesn't kick in until a few hours in. This means due to the portable nature, you could be playing for a week or so and still be winning by a long way, making it hard to find motivation to continue or feel a challenge.

However, aside from that, Ridge Racer is one of the best games on the 3DS. The game at the full 3D setting is nothing short of stunning and shows the power and unique abilities of the system very well. However, we must say that we found it difficult to concentrate on the game at full 3D for long periods of time and you will probably find yourself having to turn the 3D slider down to play it for lengthy periods.

The game does not have official tracks or cars, but instead relies on previous Ridge Racer favourites. With that said, you able to buy new cars and more powerful models of each car. You can also upgrade those cars. As well as this, you gain money from each race finish and that money can be used to give you an edge such as a boost during the start of the race which adds a different strategy to the racing present in the game.

The game also has street pass functionality, but this is where the online section of the game ends which is the biggest disappointment. There is no online play to speak of and in a system which seems to finally be getting online and friend codes right, it's a real shame.


And this fact is reiterated even more so when you see how stupid the AI in the game are. They drive on tracks, will drive into you and generally just race around a track without any idea where other cars are. This is not a big issue as all Ridge Racers have been like this, but most other Ridge Racers had the ability to play with other gamers.

Visually, as mentioned before the 3D is amazing, however, in some ways taking the 3D away and the game looks a bit disappointing. There is no doubt that this game relies on the 3D for its wow factor and being on the 3DS there is nothing wrong with that, but in 2D mode its quite boring to look at. Given that some people won't be able to look at the 3D of the game for long periods, this could be considered a problem. The music is fantastic and is a greatest hits of the Ridge Racer series and there is no doubt that Ridge Racer 3DS is a love letter to those who love the series.

Being a launch title means that developers generally need to take shortcuts to make a release date. With this in mind, we can't help but wonder if the few extra months or weeks to add online play and a few other features could have taken this game from rent through to a must play. Ridge Racer 3DS is one of the best launch games on the 3DS system, however, this is not necessarily a reflection of the game being good; more so that the launch titles for the 3DS were so poor.