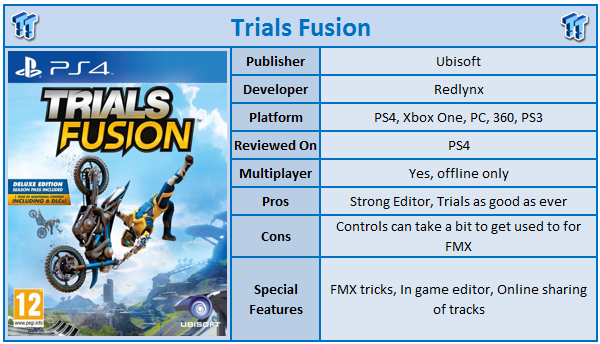 When Redlynx first launched Trials to the world many years ago, it was probably beyond its wildest dreams how popular the series would become. When you look at it on paper, it seems like the kind of title that would appear to a niche audience, but a few years later we have the game launching on next-generation consoles in the form of Trials Fusion.

Fusion really is the first game to try and mix up the core gameplay of trials with a few different things. Thankfully though, the insane difficulty level and addictive nature of the core game remains. This is a game that will have you up all night trying to complete a tough level. 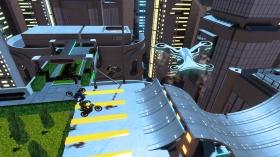 For those who are not familiar with the Trials series, it basically is a series of progressively more difficult motorcycle stunt tracks to complete. The main aim of the game is to get from point A to point B as fast as you can, but Trials also throws in a few more challenges - such as limiting the amount of times your rider falls off and for the first time in Trials Fusion, completing tricks whilst finishing the tracks. The latter is one of the biggest changes to the Trials formula since its inception and against all odds, it suits the series perfectly.

The reason why we were concerned about tricks being added to the series was that the core of Trials has always been to have a significant level of control for the bike available to the user. It's always been a game where if you were more than a centimetre or more off the landing, chances are the rider was going to fall off - it was a series that demanded the utmost level of concentration. You were too busy looking after the physics of the bike to even contemplate having the rider perform tricks. 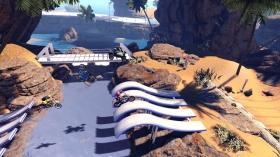 However, it is clear Redlynx knows its audience and game, because they have structured it in such a way that the tricks flow into the game universe perfectly. This is because only certain tracks are designated as 'trick' tracks. That's not to say you cannot perform tricks on every track, but it is specific tracks which task the player to perform tricks to gain the medals required for progression. It is possible to unlock all of the sections available in this version of the game without taking these tracks on so if the tricks do not appeal to you, they can be ignored.

But for those of you keen on the tricks, we are happy to report that they fit seamlessly into the game world, and it also adds a level of variety to the game not seen before. Instead of just finishing tracks to progress, there are levels which change the gameplay up significantly. Instead of the main game where you just race from A to B, in one level you need to perform the trick being displayed on the screen before hitting the ground. It's actually enjoyable to perform these tricks, but there is one slight problem - the controls.

The controls for the tricks are not bad once you get used to them, but they demand a high level of accuracy, probably too much for the PS4 controller. The game is also not the best at explaining the controls. Many times we felt we were performing the tricks being asked of us, only to have to tweak the controls a little bit from what was being displayed to get it to trigger. Once you become accustomed to the controls this is not a problem, but the tricks can be incredibly frustrating at first.

When you move past this you find what makes trials the fantastic series it is, remains. You begin with the easy tutorial style levels and finish off with some of the hardest trials levels that you will ever play. If you are a seasoned trials player, you may blow through this game a lot quicker than you would expect, with the majority of the game able to be experienced in about five or so hours of play. Of course, there is the ever elusive gold medals to go after and gear to unlock as well and with a season pass available, Ubisoft is promising more content for a price.

Along with this, there is a track editor available within the game, and you can access more content on PSN from other players including the ability to 'follow' various types of tracks that you may want to download. 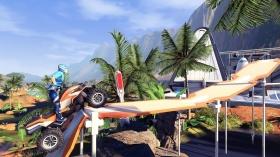 The track editor is one of those situations where it's so powerful that it can seem daunting to use. Redlynx has posted numerous tutorial videos, but this is an editor that to get decent results out of, you will need to put in a serious amount of effort. That said, the engine powering the editor is impressive and basically just builds the game world entirely in front of you as it is constructed. As you build each track, a complexity meter indicates to you how challenging the level is.

This is something where those with skill will produce some amazing tracks, but there most certainly is likely to be a very good bunch of builders with many, many more who just download. You can jump in at any time whilst editing to play the track - no load times required - which makes it an attractive game addition despite the complexity. 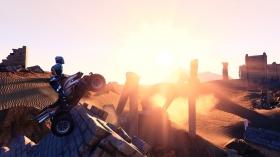 There is also a few quirks that have been added this time around as well. This game really feels like a celebration of the Trials universe and Redlynx has tried to be as crazy as it can. For example, there is a bike available that is invisible to the user, which makes the rider appear floating in mid-air.

Considering most players use the look and feel of the bike to determine each landing, this ups the difficulty level tenfold, and it's also a fantastic example of just how well the developers get why this game series is so popular. There is also some non-typical motorbike vehicles available as well with an ATV unlocked early on in the game that offers a completely different challenge to the other bikes on offer.

In terms of PS4 specific impressions, the game has made the jump to the next-generation console well. Stunning graphics displayed at 1080p (unlike on the Xbox One) really are an improvement on the previous generation and despite our gripes with the controls when it comes to tricks, on the physics side, it is near perfect. Trials has always been a game where if you failed a level, you could blame no one but yourself, and this remains the same with Fusion.

Trials Fusion is a good evolution of what is already a fantastic game series. The additions to the game and the boost to the next-generation consoles has helped the game even further, and assuming some people start to produce some quality tracks, then the editor will have this game playable for many months to come, even without Ubisoft's own upcoming DLC.

PRICING: You can find the Trials Fusion for PlayStation 4 for sale below. The prices listed are valid at the time of writing but can change at any time. Click the link to see the very latest pricing for the best deal.

United States: The Trials Fusion PlayStation 4 retails for $39.96 at Amazon.