Yesterday during IDF Taiwan here in Taipei we learnt some interesting information about the not so distant future of wireless technology from the chip giant. Besides that, Intel also spoke about a great number of different technologies, such as their Quad Core processor, but most have already been covered by many other websites who attended IDF in the USA late last month, so we won't go over it again. 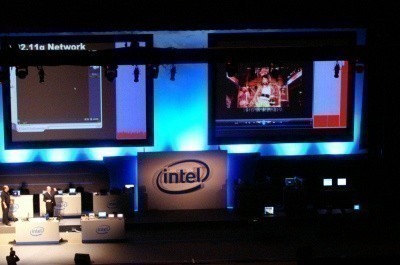 The bi-annual Intel event held in Spring and Fall all over the world aims to give members of the industry such as system builders, motherboard manufacturers, software developers and press an insight into what Intel and their partners are working on for the years ahead. One of the subjects which interested us at IDF Fall Taiwan the most was developments in the wireless technology area.

During one of the keynotes, the audience was given a demonstration of an upcoming wireless standard called Ultrawideband by WiMedia (or UWB for short). A simple comparison was made between regular Wireless LAN (WLAN) and UWB - streaming a large sized high-bandwidth video from a server using WLAN and UWB, the latter launched instantly and playback was as smooth as silk while WLAN was slow to load and playback was very sluggish.

UWB will make its way into the WPAN (Wireless Personal Area Network) standard which is due to arrive later in the year in the form of a number of different devices such as those powered by Certified Wireless USB but in mass quantities in many forms of products from computers to consumer electronics in 2007. WPAN is like Wireless LAN in that two or more computers can connect together and access each other but WPAN extends to many more devices other than just PCs or notebooks and also works a little differently.

WPAN uses point-to-point or peer-to-peer technology much like a traditional Ad-Hoc WLAN network but also without the need of a wireless router, reducing infrastructure costs. Each WPAN device connects to each other through a bridging or meshing method which allows for extended range. Ease of use is improved with better methods of only allowing certain clients or devices to access your personal network, as WPAN is more for your personal needs and hooking up devices such as mobile phones, rather than WLAN, which is more suited to an office environment.

It is essentially the same type of technology as Bluetooth but on extreme steroids. Imagine you and your friend are sitting at a pub and you want to transfer a song from his phone to yours. Just access the Bluetooth settings part of your phone and detect his phone and allow it access - this is one type of WPAN in action and this type of technology has been around for sometime now. 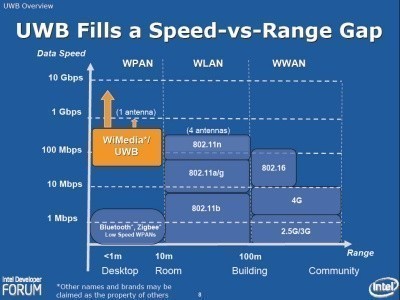 Although step forward several months, the UWB part of WPAN allows for amazing maximum throughput rates of up to 480Mbps (60 megabytes / second) at a range of 10 meters or less (same as Bluetooth), which matches that of USB 2.0 - hence Intel are promoting WPAN as USB without wires. At a range longer than 10 meters, Intel are recommending the upcoming 802.11n standard which has greater range than 802.11g by about 20 meters AND improves on throughput massively by offering up to 540Mbit/s compared to just 54Mbit/s offered by 802.11g. 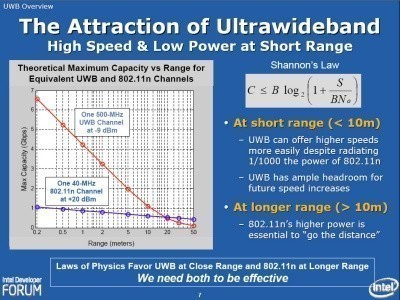 Without actually using it, it seems like a typical WPAN environment will be much like Bluetooth (like the mobile phone scenario which we talked about before) with a heck of a lot more bandwidth to play with. Imagine transferring that MP3 from your friend's phone or to your phone from your PC in just seconds rather than Bluetooth which uses its maximum transfer rate of 3Mbps (well, well under 375kb/s in real-world) and takes minutes to copy. This type of bandwidth, while it might seem a little extreme now, will become very usable in a short amount of time. With Ultra Mobile PCs coming out soon, the need for higher bandwidth transfers will become increasingly necessary - take this for example, consider you want to exchange a full length movie with your friend on your way to work on the train - that is simply not possible with Bluetooth and there's not always a WLAN network accessible and even if there is, that doesn't mean you and your friend will be able to transfer data between each computer.

When it comes to bandwidth, initially we can expect bandwidth of around 400Mbps or 50MB/s or a little under half the speed of Gigabit (theoretical maximum) but later this is expected to increase to 960Mpbs or 120MB/s and beyond by using multiple simultaneous frequency bands. It is enough bandwidth to allow you to stream high-bandwidth video content from your PC to TV and provides plenty of bandwidth throughout for a range of different device and appliances, which is sure to spark the launch of many cool and new unwired products. Belkin for one have already announced their intentions to bring out a USB 2.0 adapter product based around Intel's Wireless UWB Link 1480 MAC silicon chip (pictured below) in their upcoming UWB USB adapter, which will become available in Q1 2007. 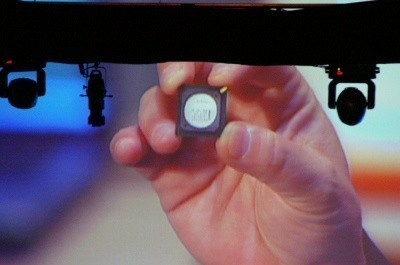 Intel also touched on WiMax and 802.11n but clearly the main focus at this IDF was UWB in WPAN devices. UWB will come in the form of many products from computers to CE accessed by WiNet (internet access) and Wireless USB, WiMedia which allows UWB connectivity by printers and speakers and hooked up by various host interfaces such as PCI, PCI-E and USB.

Wireless technologies are set to improve vastly in both speed and range very soon. Gigabit clearly offers the best bandwidth but life is more interesting and easy when you can do it without cables


Please DIGG this story if you liked it!