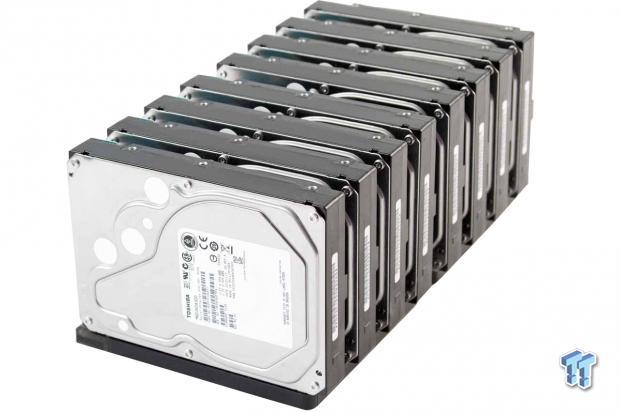 The Toshiba MG03SCA is a 3TB 6Gb/s SAS Enterprise HDD that has been the lynchpin of general storage for entry-level server workloads and capacity-intensive Tier 2 networked storage systems. The MG03 series, in both SATA and SAS flavors, has made its way into cloud, file, and object-based storage and disk-to-disk data protection applications.

We initially took a close look at the 4TB SATA variant, the MG03ACA400, in August of last year. This model features a 6Gb/s SATA connection, unlike the SAS model we are testing today, but shares many of the same performance characteristics.

The MG03SCA300 features an MTTF of 1.2 million hours and a load/unload cycle rating of 600,000. This should provide plenty of durability to last through the five-year warranty period, even under the most demanding 24/7 workloads.

One of the hardest aspects of recommending storage products to our readers is that we cannot accurately test reliability specifications. Warranty periods are a good reliability indicator; manufacturers have to place plenty of faith into their product to guarantee it with replacement. However, the nature of product evaluations does not allow us to use every product for an extended period of time. The MG03SCA300 series is actually an exception.

Toshiba allowed us the use of an array of eight of these drives for the last several months. During this time, these drives have been constantly subjected to heavy workloads as we build out our upcoming application testing. These drives have also served as one of our base arrays for several caching articles we have in progress.

The MG03SCA300 spins at 7,200 RPM and features an average latency of 4.17ms. Four 750GB platters hold user data, and a 64MiB FIFO ring buffer provides optimized caching to smooth out performance in heavy random workloads. A sustained transfer rate of 155 MB/s for the 1, 2, and 3TB versions, and 165 MB/s for the 4TB model, keeps it within the same performance envelope of the SATA variants.

Power consumption is always a big concern, especially when storing large amounts of bulk data. The MG03 series consumes 11.3 watts during read/write operations and features a low power idle of 6 watts. The low power idle keeps the drive in a ready state, so it can respond to data requests at any time.

The MG03SCA family of HDDs also features models with a MG03SCP product number. These models feature enhanced encryption capabilities. TT10 Sanitize crypto-erase and TCG-Enterprise SSC protect data and offer the option of wiping the drive in seconds. This can also help during drive retirement or repurposing by providing a fast means of data destruction that does not require the additional, and costly, step of physical destruction.

Today, we will examine the performance of the MG03SCA series utilized in a RAID environment. First, let's take a quick glance at the internals and the specification sheet. 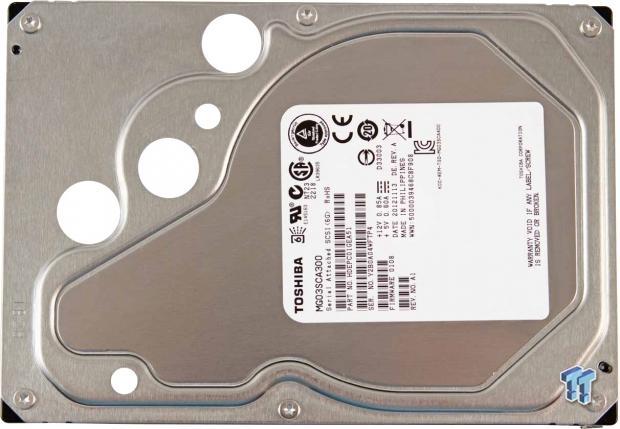 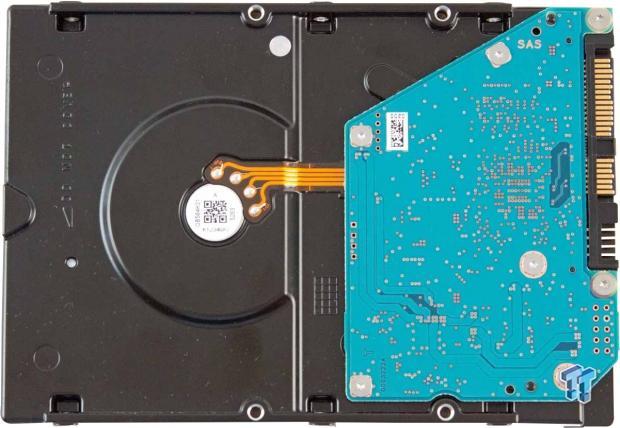 The MG03SCA300 comes in a standard 2.5-inch form factor, with the relevant branding and logo on top of the drive. 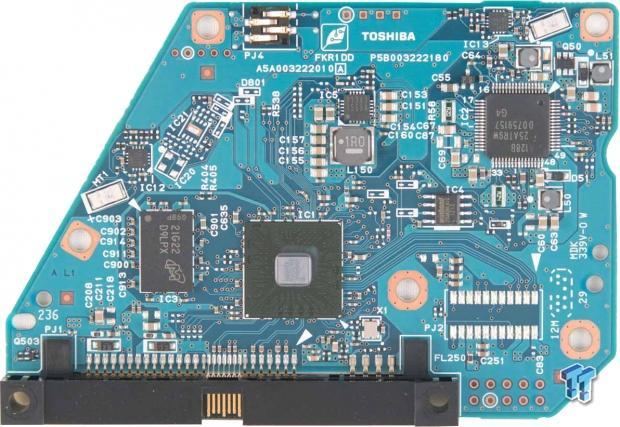 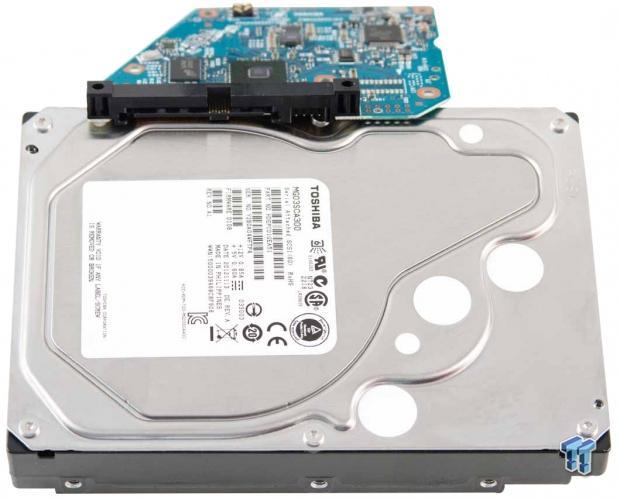 The MG03SCA300 benefits from the use of a 6Gb/s SAS connection, which provides failover and multipath capabilities. 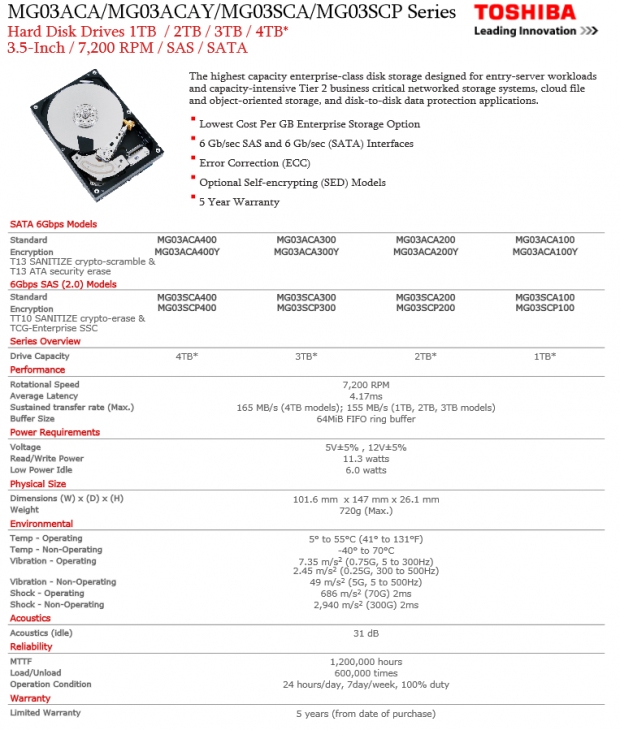 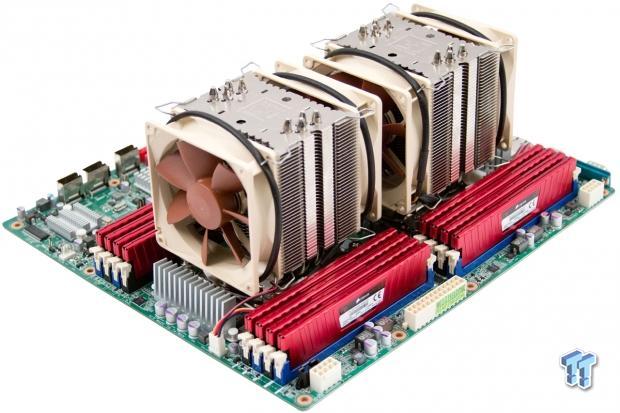 We utilize a new approach to RAID storage testing with our Enterprise Test Bench that is designed specifically to target long-term performance with a high level of granularity. Many testing methods record peak and average measurements during the test period. These average values give a basic understanding of performance, but fall short in providing the clearest possible view of I/O Quality of Service (QoS).

The first page of results will provide the 'key' to understanding and interpreting our new test methodology. In replicated environments, RAID 0 can be a compelling choice for bleeding edge performance. RAID 5 provides a layer of data security that protects from the loss of a drive.

We are testing both RAID 0 and RAID 5 in this evaluation. This evaluation consists of tests with default settings conducted on an LSI 9271-8i with a direct connection. We conduct our tests over the full LBA range to allow the HDD to highlight its average performance. Short stroking can increase performance at the loss of capacity. 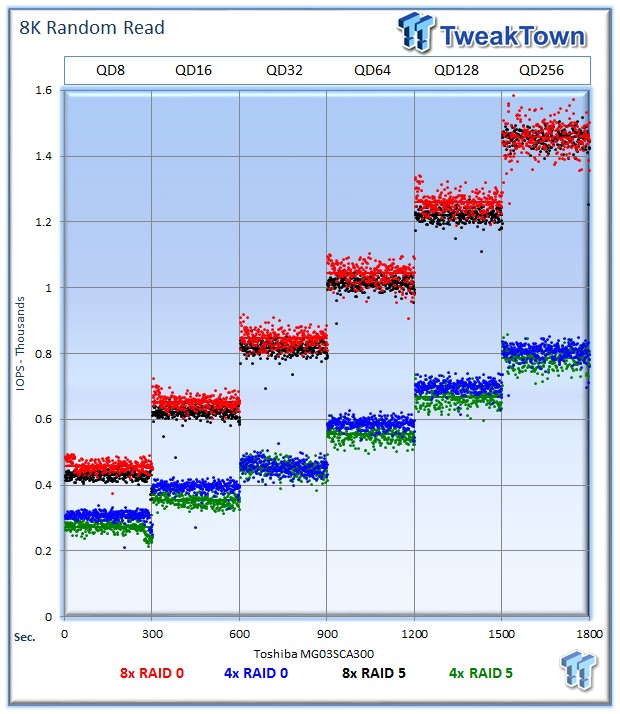 8K random read and write speed is not tested for consumer use, but this is an important aspect of performance for enterprise environments. With several different workloads relying heavily upon 8K performance, we include this as standard with each evaluation. Many of our Server Emulations below will also test 8K performance with various mixed read/write workloads. 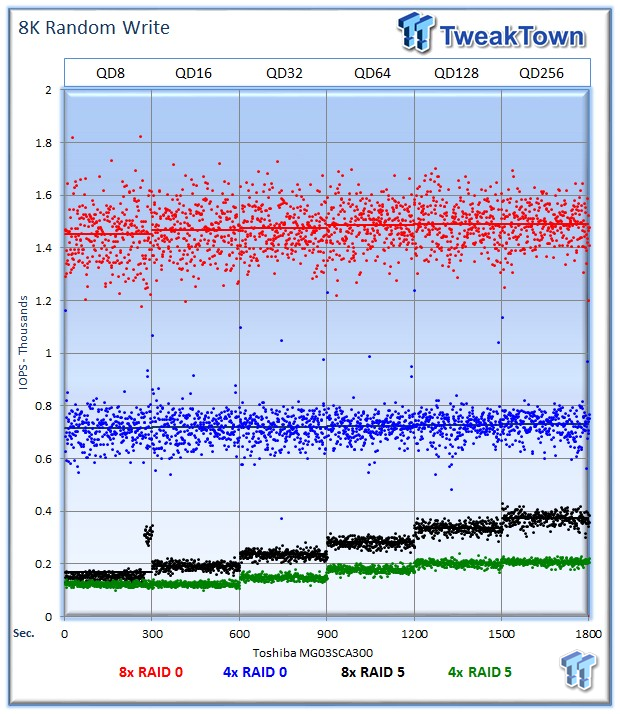 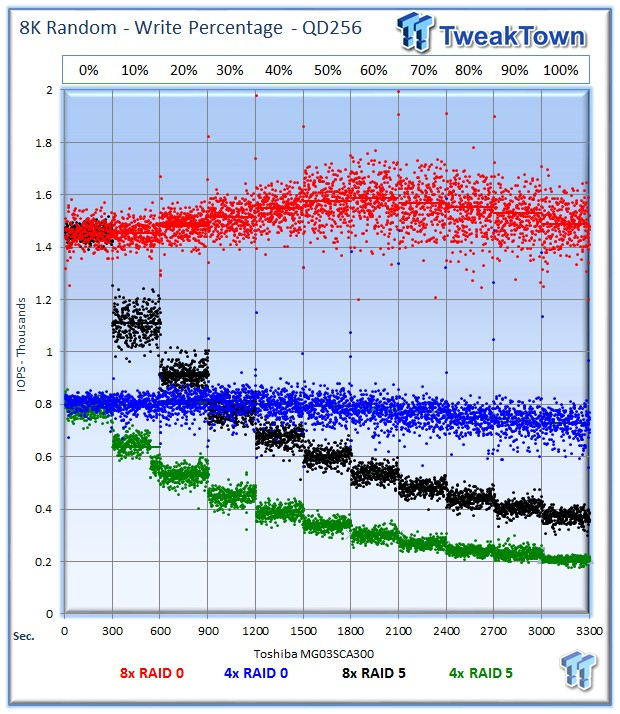 The 128K sequential speeds reflect the maximum sequential throughput of the HDD using a file size encountered in normal usage. 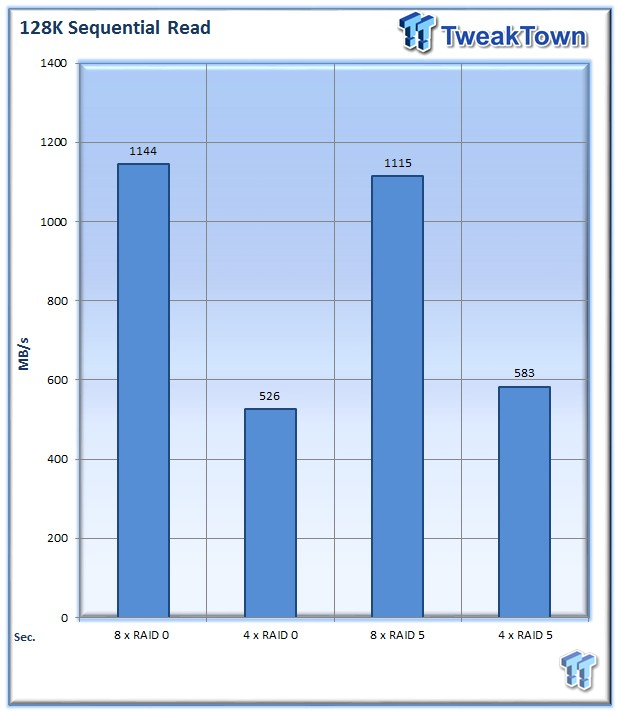 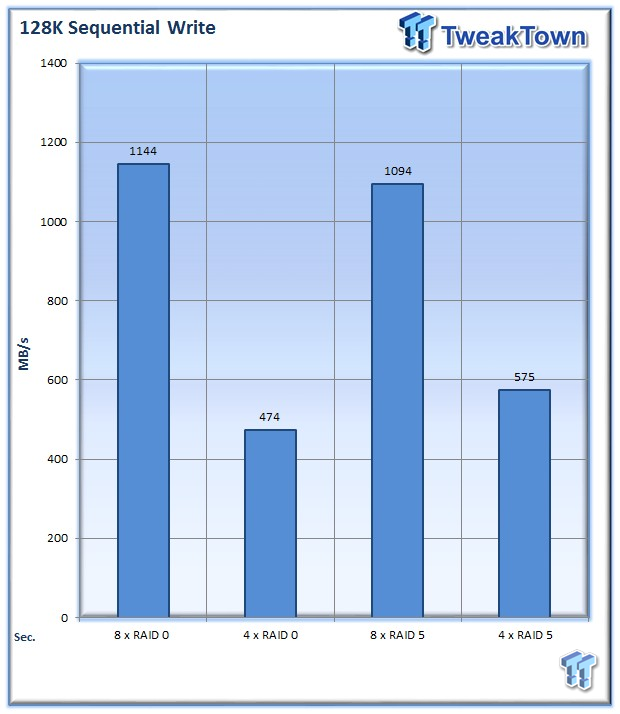 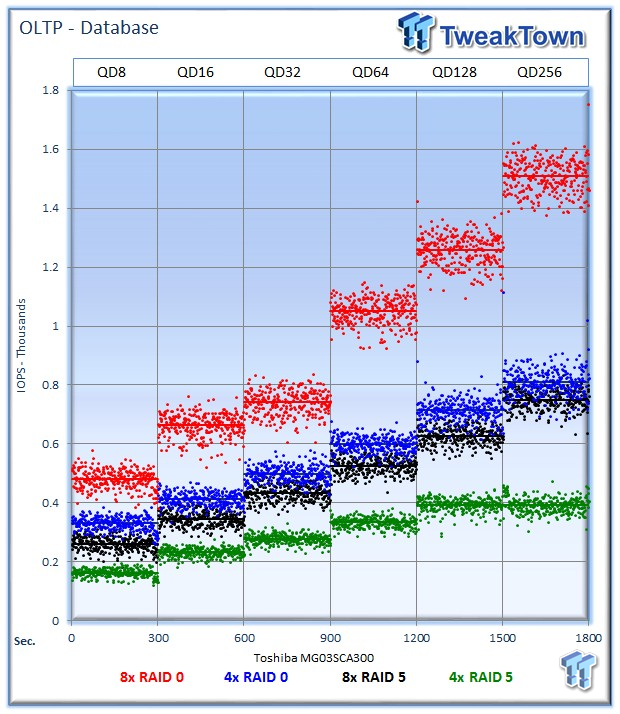 This test emulates Database and On-Line Transaction Processing (OLTP) workloads. OLTP is in essence the processing of transactions such as credit cards and high frequency trading in the financial sector. Databases are the bread and butter of many deployments. These are demanding 8K random workloads with a 66% read and 33% write distribution that can bring even the highest performing solutions down to earth. 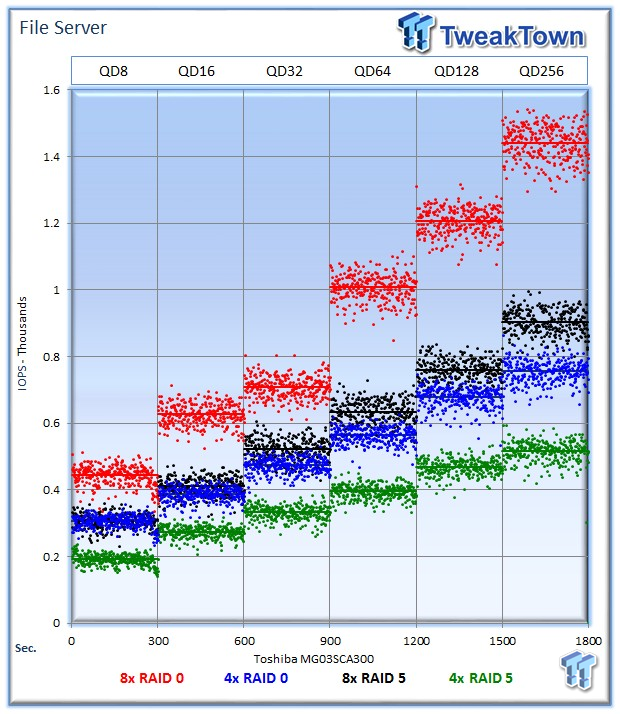 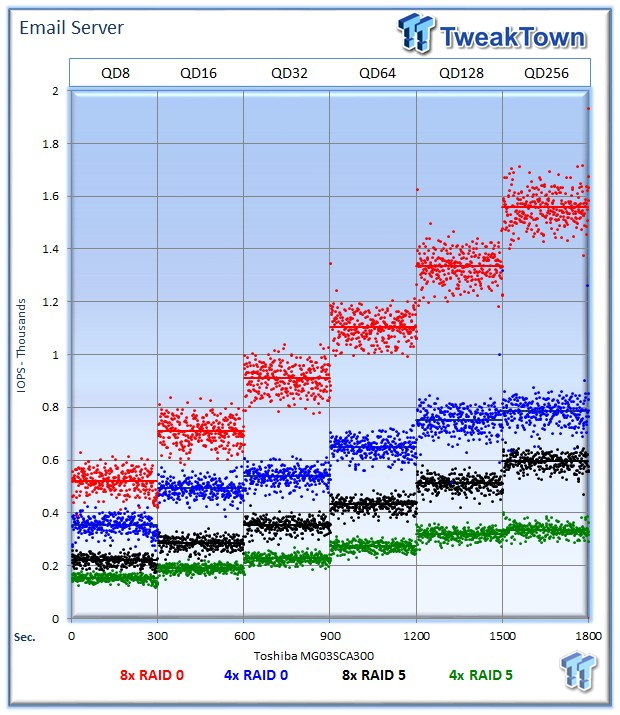 The Email Server profile is a very demanding 8K test with a 50% read and 50% write distribution. This application is indicative of the performance of the solution in heavy write workloads. 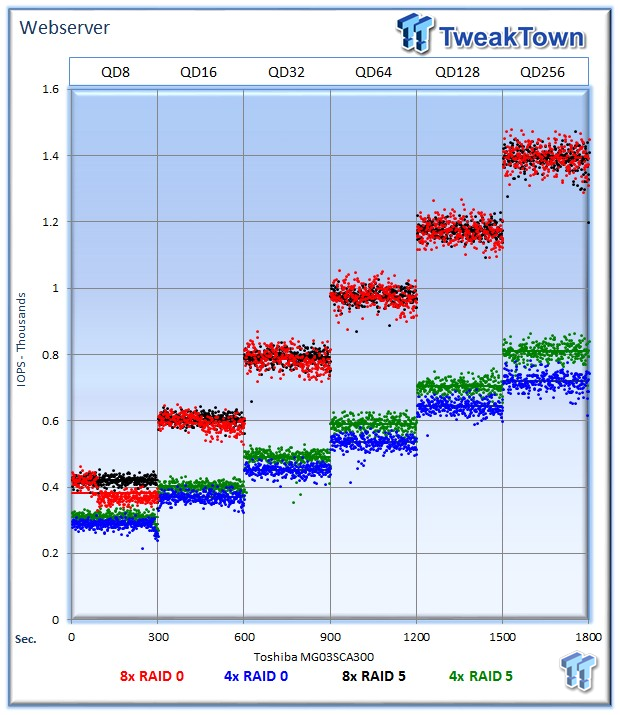 The Web Server profile is a read-only test with a wide range of file sizes. Web servers are responsible for generating content for users to view over the Internet, much like the very page you are reading. The speed of the underlying storage system has a massive impact on the speed and responsiveness of the NAS and thus the end-user experience. 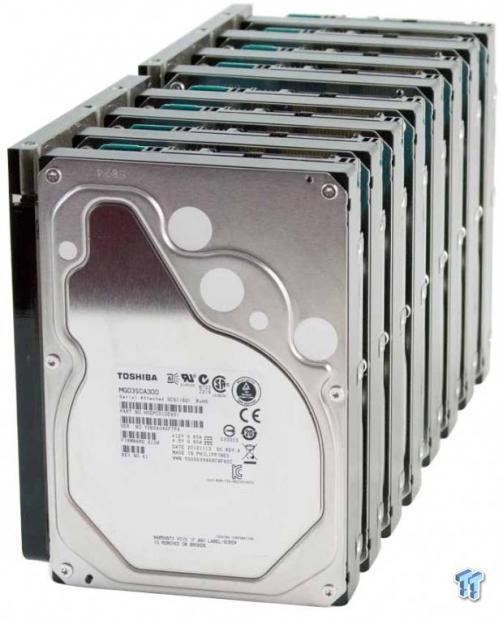 The role of the HDD is evolving to mirror the changing needs of the datacenter. We tested the performance of the Toshiba MG03SCA300 drives in RAID configurations, but there is a movement to a multitude of different usage models in the datacenter.

Some are forgoing RAID entirely. The capacity of the HDD continues to increase, and array capacity continues to increase along with it. This increase in size results in a higher probability of data loss. Bit rot, uncorrectable errors, or entire drive failures are always a possibility even with the best of drives. These types of errors and failures result in a high likelihood of drive rebuilds in parity environments. During rebuild periods, the enhanced capacity also increases the risk of an additional failure, and these catastrophic failures can result in the loss of the entire array. Larger capacities also hinder RAID-rebuild times, which adversely affects host performance, sometimes for weeks at a time.

There are several new approaches to data storage gaining steam. Scale-out object storage and rateless erasure coding are coming to the forefront. Surprisingly, some of the largest players in the datacenter no longer utilize RAID in their infrastructure. Heavyweights such as Amazon and Google rely upon heavily replicated data hierarchies to protect the bulk of their data.

RAID is not going to disappear overnight, but the evolution of data storage requires solutions that can fulfill a wide variety of roles. No matter the end application, consistent performance is the hallmark of an effective storage solution.

We utilize scatter testing to observe performance variability, and RAID testing is also uniquely well suited to test performance consistency. RAID arrays can only perform as fast as the slowest drive, and a weak link will affect the entire array. Drives that deliver inconsistent performance suffer poor RAID scaling when placed into arrays. These issues are magnified when utilizing large arrays.

Our tests of the MG03SCA300 drives revealed solid RAID scaling. We regularly observed near-linear scaling during the tests. Mixed workloads can be a significant weakness of lesser-quality drives, but we observed solid performance in our 8K percentage testing as we mixed in heavier workloads. The server emulations also feature varied percentages of mixed random data, and the drives performed within expectations.

One area we usually cannot cover as well as we would like is durability. In this case, we have had an array of eight MG03SCA300 HDDs in the lab for several months. These drives have performed well with constant heavy workloads. We also swap out hardware constantly into different chassis, JBODs, and expanders and have not had issues. Of course, our sample size is not large enough to hypothesize on drive reliability metrics, but we can honestly say our samples have performed admirably.

Along with our array of eight Toshiba MK01GRRB/R, which we have used since the inception of our current testing regimen, the Toshiba drives have performed very well in numerous scenarios, and we look forward to their continued use in our enterprise lab.

PRICING: You can find the Toshiba MG03SCA300 6Gb/s SAS 3TB HDD for sale below. The prices listed are valid at the time of writing, but can change at any time. Click the link to see the very latest pricing for the best deal.