Silicon Power manages a rather large portfolio of solutions ranging from internal SSDs to external hard drives and memory cards. In mid-2011, SD 4.0 was introduced, offering speeds up to 312 MB/s using a four-lane differential bus. Up till this point, we have reviewed only a few solutions from SanDisk and Lexar that included this technology, luckily SP has just added the Superior Pro to their lineup and sent one over for review.

UHS-II doesn't command any changes to the form factor. A UHS-II microSD is still the same old microSD card we use in cameras, tablets, or smartphones. That said, flipping one over will reveal two sets of connections for that expanded bus we talked about above.

The Superior Pro takes over as Silicon Power's top option or flagship when it comes to microSD solutions. They offer it in 64GB and 128GB capacities with marketing performance offering 290 MB/s read and 160 MB/s write. This makes the card good enough for a Class 10, UHS-II U3, and V90 speed rating - perfect for shooting extremely high-resolution photos or 8K video.

The MSRP of the 128GB Silicon Power Superior Pro comes in at $64.99 with a five-year warranty.

Capacity is listed top the right with the speed class down below.

Removing the card and adapter from the packaging, they are captured in a plastic clamshell, both sharing the same colorway.

Flipping them both over, you see the two sets of connections for each card. The adapter still has the SD lock on it.

A closer look at the card shows the colorway and branding. Capacity is listed on the card to the right.

I added in a quick ATTO bench to double-check the results and came away with a peak of 249 MB/s read and 141 MB/s write. Read performance was consistent from 512K through 64M.

As far as memory cards go, the Superior Pro tested really well and has been in the field being used since. At this point, I've had no issues about a month in with the card, and overall build quality seems to be on point.

As mentioned, the card tested really well and was able to hit 260 MB/s read and 160 MB/s write a bit shy of the 290 MB/s read that was prescribed, but we did meet the write performance goal with ease. File Size testing in ATTO showed this card really excels with larger file sizes 512K and up, offering a solid 249 MB/s read.

Pricing has come down considerably for UHS-II solutions since we first tested them in 2014. Back then, 32GB was going for $129.99, and today you can pick up this Silicon Power Superior Pro in the 128GB capacity for $64.99. 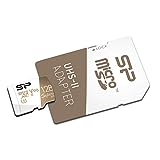 As of this writing, the Superior Pro is the lowest cost 128GB UHS-II microSD available and offers top tier performance.