Roughly three years ago, we took a look at what we thought may have been the pinnacle for Corsair when it comes to mechanical keyboards, but with what we have in hand now, we were wrong. Just when you thought you could not pack in any more RGB illumination, when you believe functionality has hit its peak, a company comes up to bat that shows us there are even more options possible. Much of what we will see will appear very familiar to other K95 keyboards we have seen in the past, and the K95 RGB Platinum was where we thought the plateau was, but an entirely new angle of features has become mainstream now!

There are devices out in the wild with similar features, but it typically takes a few models put together to deliver what has happened in Corsair's latest mechanical keyboards. We have seen RGB light bars on the back of keyboards, we have seen the use of PBT keycaps, single or double-shot, we see mechanical switches of various kinds, but none have offered the lifespan Corsair is bragging about with this model! We have seen things like additional USB ports, we have witnessed programmable buttons, and while most can cover desktop activities, extra keyboard features, or even the ability to use mouse commands from a keyboard, we have never seen outreach go beyond a mouse either. There are plenty more things to get excited about with this newest keyboard to find its way into the Corsair Lineup for the body of the review.

As the title suggests, we indeed have the Corsair K95 RGB Platinum XT in our hands, and while at first, you may assume it is just another fancy mechanical keyboard, take the time to look further, there is more than initially meets the eye! Keeping all things that have made their keyboards such a success up to this point was mandatory. Still, the additions we find will apply to many users, and even has a unique nod built-in for the streamers, more specifically those who opted for an Elgato stream deck. With what you are about to see in this review, there is no doubt that this is the most functional mechanical keyboard, packed with the most features we have seen to date. The real questions are, does it all pan out to deliver a better product, and is it worth the MSRP Corsair has set ahead of its release? With the chart we found in the reviewer's guide, we can see that Corsair attempts to cover anything that may be of interest. At the top, we start with the brushed black aluminum that tops the black plastic frame of this 110-key extended layout form factor. Next are the switch options, and this is where it gets interesting. While we have the Cherry MX Blue option, we see that had we opted to wait for an MX Speed Silver or MX Brown version, we could have seen 100-million stroke keys as an enormous advantage to those keyboards. Each key is individually lit, and are per-key programmable, built taking it a step further, there is also a LightEdge strip at the back edge nineteen LEDs, which can be programmed as well as all of the rest within a range of modes or 16.8 million colors. As to the keycaps themselves, rather than ABS plastic, Corsair upped the game and opted for PBT this time. Not only that, they are double-shot with centers that allow lighting, while the black is solid through and through, reducing wear physically and visually.

The K95 RGB Platinum XT also comes with things like full NKRO, 100% anti-ghosting, and the polling rate is set to 1000Hz. One significant change we see is that this is the first keyboard we have tested that requires USB 3.0 Type-A for connectivity and enough power to allow the XT to function at its full potential. The pass-through port uses the standard USB 2.0 for connectivity. Following the chart, we see there are dedicated multimedia keys, there is a volume roller, and you can control brightness via a button on the keyboard, and can also use the Windows Lock and profile buttons that flank it. There are status indicators, the cable is braided and is six-foot-long, and of course, you will want iCUE to take advantage of the feature set.

Dimensionally the keyboard is 465mm from left to right, it is 171mm from front to back, and without the feet extended, it stands 36mm tall. The weight of the keyboard is shown to be roughly three pounds, without the wrist rest, which is new for this keyboard as well! Along with the wrist rest, in the box, you will also find FPS and MOBA keycaps; there is an S-key set to replace the G-key keycaps, a Corsair keycap to put wherever you want, and a generic keycap puller comes with them as well. The last bits we see cover the two-year warranty of the K95 RGB Platinum XT, and the price.

The price we sort of glossed over is going to be the sticking point for a lot of potential customers, as you have to do some homework to see if that $199.99 MSRP is justified. As it sits, we see things like the longer lifespan switches, which, if the LEDs hold out, means you get nearly five times the lifespan of a conventional mechanical keyboard. On top of that, we see other additions here and there that have changed since the currently $140 K95 RGB Platinum was the new hotness. Things like a new wrist rest, a new logo plate, more keycaps, and more aesthetic appeal. We will have to give everything a fair shake before we deliver an opinion on the cost, but we will say that for those that can take advantage of the new features the K95 RGB Platinum XT offers, the outlook is pretty good! 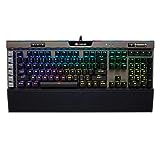