For those looking to keep things simple when it comes to RGB fans, the Scythe Kaze Flex 120 RGB fans are an affordable option. With good value and RGB illumination only limited by motherboard support, we have no reason not to recommend you try them out!
Buy at Amazon

Looking back through many of the RGB solutions in fan kits we have seen recently, there is one overwhelming feature that drives through many of them, and that is control. What we have seen mainly are groupings of fans, which also come with a hub to control the RGB LEDs, and either software or a remote control to customize the lighting in various modes or cycles of solid colors. The thing is though, there are many who still like the old idea of solid colors without all the fancy profiles and controls that come along with the others. To those types of people, they want a simpler solution to adding a bit of color flair to the inside of their case.

Scythe has stepped up to fill this void with various solutions. All kept in the Kaze Flex series, there are six models to choose from. All models start with the SU1225FD12, but the following four or five letters of the part number are the differentiating factor. The LR-RD, MR-RH, and the HR-RN are three pin powered, and run at speeds of 800, 1200, or 1800 RPM respectively. The LR-RDP, MR-RHP, and HR-RNP are all PWM and scale from 300 RPM to speeds matching the earlier three options.

What ties all of these fans together is the implementation of RGB LEDs. With these fans, all you need is an RGB 4-pin header open on a motherboard, and with either BIOS options or the various motherboard RGB LED suites out there, you can run the chassis fans to display what the motherboard does, and that's it. Nothing fancy when it comes to patterns and modes, just simply an illumination inside of the chassis where everything matches in sync.

Of the fans mentioned above, Scythe sent us three retail packaged SU1225FD12MR-RHP Kaze Flex RGB fans, which are PWM and top out at 1200 RPM. Using a fluid dynamic bearing to support the fan hub as well as the PCB containing the eight RGB LEDs found under it. With the fan turning at its fastest, you should expect slightly more than 50 CFM, which matches most other kits we have seen, but the 1.05 mmH2O of static pressure is a tad concerning with certain uses, especially those where the flow is cut off by chassis design. If anything should go wrong with the fans you are about to see in this review, Scythe offers a two-year warranty, which is double what many other fans are covered for. 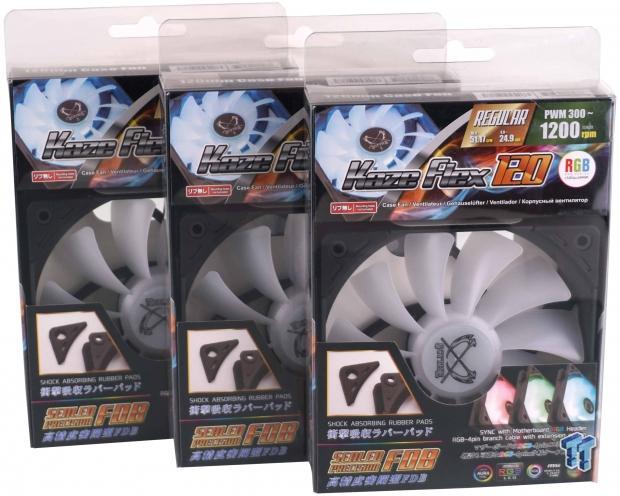 With a view of the fans through the clear outer packaging, the rest of what we see is quite busy and confusing to the eye. What we can see is that we have three Scythe Kaze Flex 120 RGB fans and they are all the "regular" ones with a max of 1200 RPM. At the bottom we see an image of the rubber shock absorbing corners, a mention of the fluid dynamic bearing, and that these fans sync with all the major players in RGB motherboards. 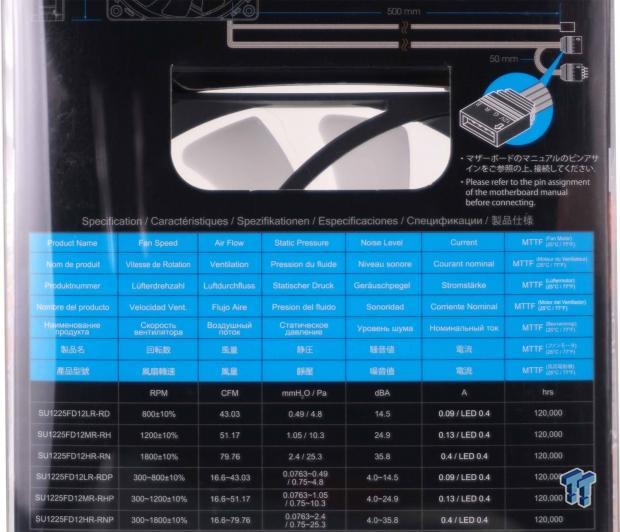 We snapped a picture of the back of the box for two reasons. The first of them was to show the 500mm length of both the 4-pin fan power lead, as well as the RGB 4-pin lead. The second was to show the specifications of the fans, which all models can be seen, and the titles to each section are offered in seven languages.

Out of the box, we find that the Scythe Kaze Flex 120 RGB fans are made with black frames and opaque white blades and hubs. The reason for the change of color of the blades is to allow the eight RGB LEDs spread light through the hub, into the blades, and even flood the area around them as well. 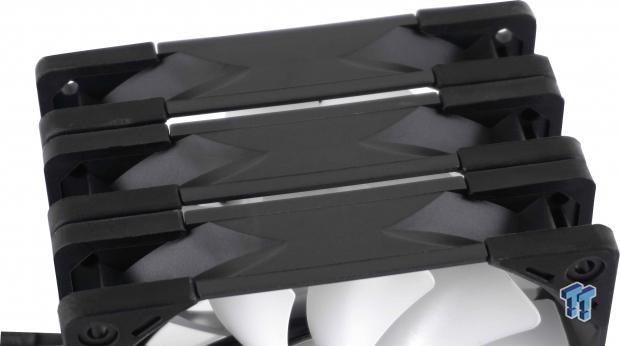 While light will come out of the front and the back of the fan frames, we can see that no light can be seen from the sides like most of the previous submissions we have looked at. However, with the lack of many of the fancy modes with this kit, the solid color glow from the fans is enough in our opinion, and with the fans in the hub, it is tough to illuminate a ring around the outside as well. 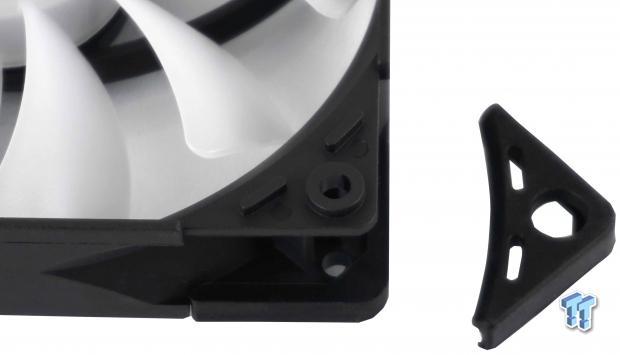 The rubber sound absorbing covers can be removed if for some reason you feel the need. Most of what we have seen used stickers applied to the plastic, but this works too. We also like that the mounting moles are not tunneled, which leaves options for instances where you may not have the right screw or need to use a zip-tie to mount it the way you need it, where you need it.

The rest of the parts that come in the box are seen here, along with the braided 4-pin fan power and pigtailed RGB 4-pin leads. Each fan will come with a set of four short fan screws as well as a daisy chain-able 12V power adapter for the fans, which will eliminate any PWM functionality if used.

While the Scythe Kaze Flex 120 RGB fans are not on the same level as a lot of the kits we have tested, we still feel that Scythe is delivering to a different segment of the market. There are many who like RGB functionality, but do prefer a cycle of solid colors, maybe a basic pulse feature, or one of the few options that motherboards offer in their software, and that is enough for them. It doesn't matter if you want to use them on a CPU cooler, a radiator, as intake or exhaust of the chassis, or even if you want to strap on into an open set of 5.25" bays, using the Kaze Flex 120 RGB simplifies life, removes many of the flashy things that make other options creep towards that $100 mark.

Sound levels are audible when running at full speed, in the realm of 35dB, and of course, the slower it turns, the less you hear them, and at idle are indistinguishable from other things spinning in the chassis. Airflow is not bad if unrestricted, as it does keep up on spec with what we are seeing, but again, with little static pressure, these may not be the best option if flow is restricted, either coming into the chassis, or even attempting to push air through a high FPI radiator. 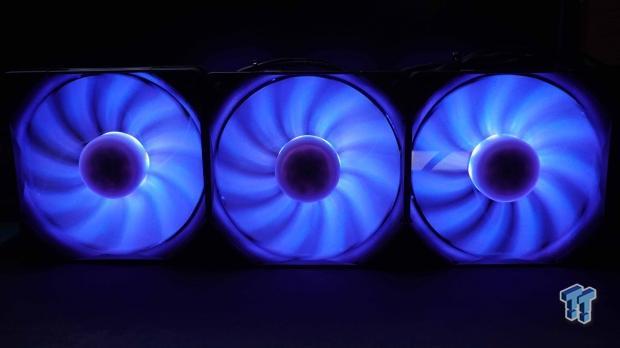 While our image of the fans in action is a bit blah and does not show much of its capabilities, that is the fault of us and the hardware we have on hand to use. With limited RGB functionality of all of our system, being they are not of the current generation of boards being offered, or look at the RGB aspects is limited, as we saw only a slow revolution of colors as the motherboard cycles the RGB colors. The intensity of the LEDs is good though, especially considering the lights are in the hub.

Use of the opaque white blades allows the light to be intense in the center, and across the blades and onto anything surrounding it, the light does not dim until you are three to four inches away from it. With newer motherboards, better options for control are out there, and from what we have seen of the software options, it may not be 100 modes, but you can still be satisfied with the results.

If there was one thing we feel that might cause problems, it is the RGB 4-pin leads. While each fan can connect to another with the in and out design of the wiring, it may be tough to get them to the motherboard RGB 4-pin header. In those instances, you will likely need an extension cable, or it is possible that an LED strip already connected to the motherboard ends closer to where the fans are. Something to be aware of, if you are thinking of going to Scythe for your new fans.

The hardest thing to do with these fans is locating them on this side of the pond. Newegg lists the SU1225FD12HR-RNP, the 1800 RPM PWM version for $16.59 a fan, which is reasonable. Amazon lists the fans we reviewed, but does not hold stock of the fans, so there is no price associated with the listing. The only place we can buy from that we found the SU1225FDMR-RHP fans that we tested were at Aquatuning, where they ask just $14.47 a fan. To opt for this trio of fans, you are in the range of $45 a set to $50, which to us is more than fair.

We have paid much more for fans with similar specifications and no RGB capability for our own needs. In the end, we feel that those who still want options, yet think the RGB craze is childish or too commercial for them, you now have a simple option to keep the system in sync without breaking the bank or needing to remember where you last left the remote when it comes time to make a color or pattern change; the motherboard is always right there.

For those looking to keep things simple when it comes to RGB fans, the Scythe Kaze Flex 120 RGB fans are an affordable option. With good value and RGB illumination only limited by motherboard support, we have no reason not to recommend you try them out!