The RGB intensity may not be the best, but the Jupiter AJ120 triple-pack of fans is a steal! Plenty of airflow, plenty of pressure, along with everything you need to get underway for just over $30! InWin stepped into ARGB fans for the chassis, and came out smelling like roses!
Buy at Amazon

As we completed our latest build for the misses, as she wanted it to be pretty, our first dive into a chassis build with RGB everything was planned. While we love the ability and brightness of the latest Corsair options. After filling the chassis with three of the iCUE QL120 fans, and a pair of the iCUE QL140mm fans, we were let down slightly with the amount of airflow, or lack of it! In most of the fans we have been sent for review, RGB comes first, where static pressure and airflow are left out as if they do not matter.

The reality is that most of these RGB or ARGB fan kits deliver less than 50 CFM! What about those who can take a bit of noise, but are looking for something with a bit more airflow and static pressure? InWin steps up with a solution to ponder! 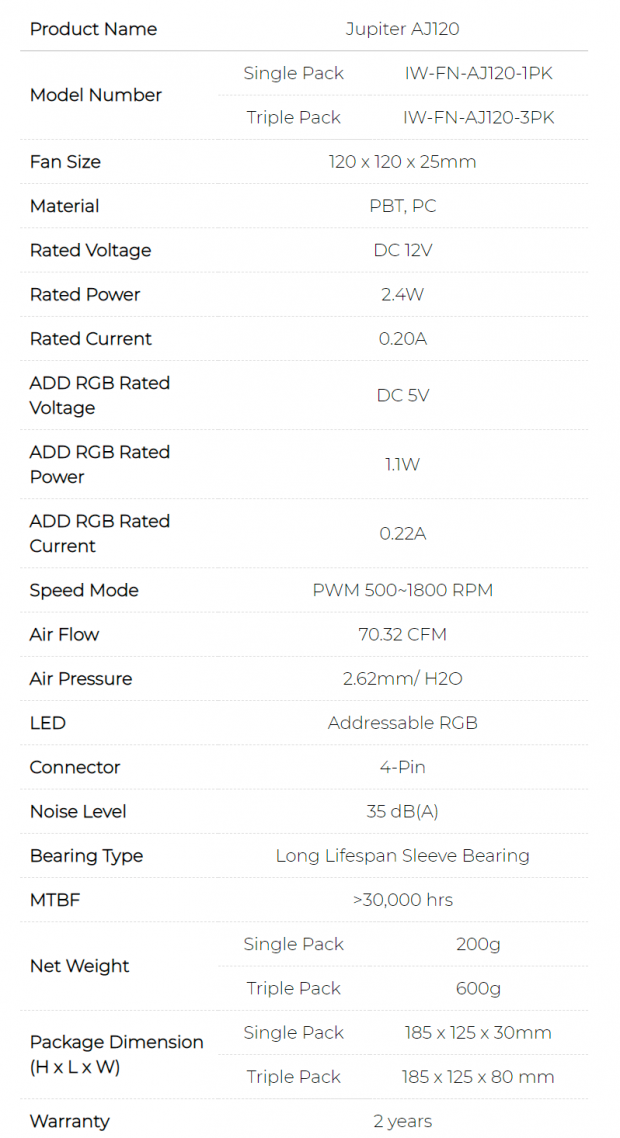 InWin sent us the Jupiter AJ120 High Airflow ARGB fans in a triple pack, but they are sold individually as well. These are 120mm fans that are 25mm thick, and the frames are made of PBT, and the seven transparent blades are made of poly-carbonate plastic. These 2.4W fans sip power with a current rating of just 0.20 Amps to spin the blades, while the 5V ARGB draws 1.1W pulling 0.22 Amps. Rotational speed ranges from 500 RPM on the low-end, with the maximum being 1800 RPM. At top speed, the Jupiter AJ120s deliver 70.32 CFM. There is plenty of flow, but with a 2.62 mmH2O pressure rating, they are suitable for things like AIOs and Cases with tighter filters!

Each fan offers six ARGB LEDs in the hub, which uses three out of four pins in their connectors. The fans are PWM controlled via 4-pin fan connections and allowed to run full speed, measures 35 dB(A). The last few things to note are the use of a sleeve bearing, roughly 30,000 hours of operation, and that they are backed with a two-year warranty.

We know that when it comes to these RGB and ARGB fan sets, manufacturers ask customers to shell out to the tune of $80 to $100 or more, all in the name of lighting! However, InWin takes a different approach to the idea. InWin lessened the illumination a bit in favor of two things, performance, and a fantastic price!

Where other fans such as this will nearly break the bank, the InWin Jupiter AJ120 X3 Triple Pack sells right now for the tiny investment of just $31! With that, not only do you get the three ARGB fans, but there is also a controller for those with older motherboards, and on top of that, InWin attempts to simplify the wiring and connectivity as well! 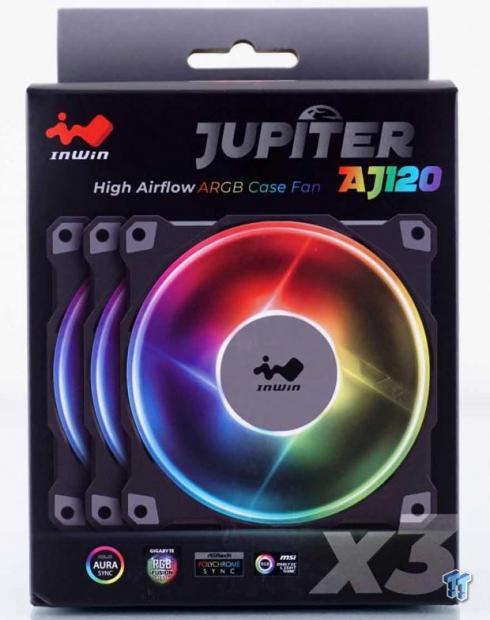 In a black box, we find the InWin Jupiter AJ120 High Airflow ARGB Case Fans, and they are shown in full glory in the middle of the panel. Across the bottom, we see notations to compatibility with ASUS, GIGABYTE, ASRock, and MSI sync methods, with a ghosted X3 in the right corner to cover how many fans are inside. 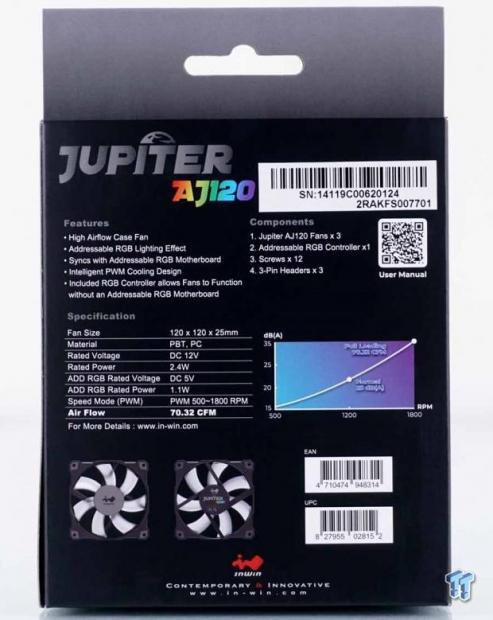 The back of the packaging is where all of the information is found. Just under the name of the fans and the serial number to this kit, we see the High Airflow, ARGB, ARGB Sync, PWM control, and included RGB controller as features, with a list to the right of it as to what comes in the box. Next comes the condensed specifications with a sound and RPM chart, which then concludes with a fan's front and back images. 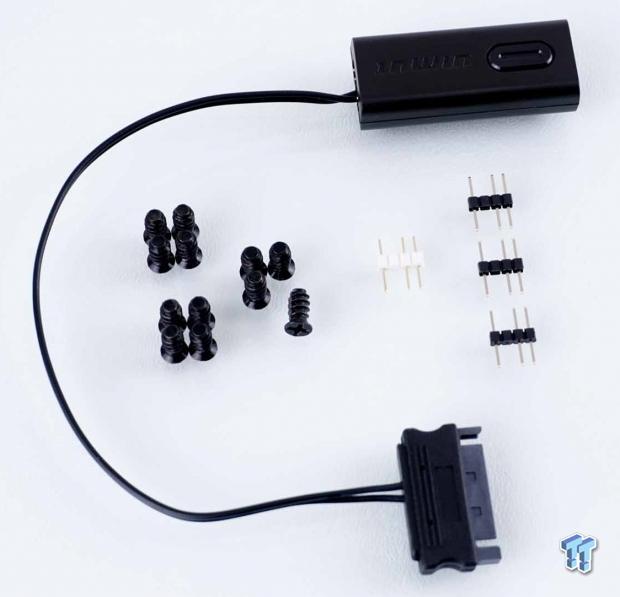 When the packaging is opened, there is a section above the fans used to store the accessories, all of which are in this image. There is the 272mm long SATA powered RGB controller wrapping around the rest of the hardware, with twelve fan screws to mount them to any chassis that takes 120mm fans, and while we have four of them, the 3-pin "jumpers" work with the ARGB cables to allow them to daisy-chain together for connectivity. 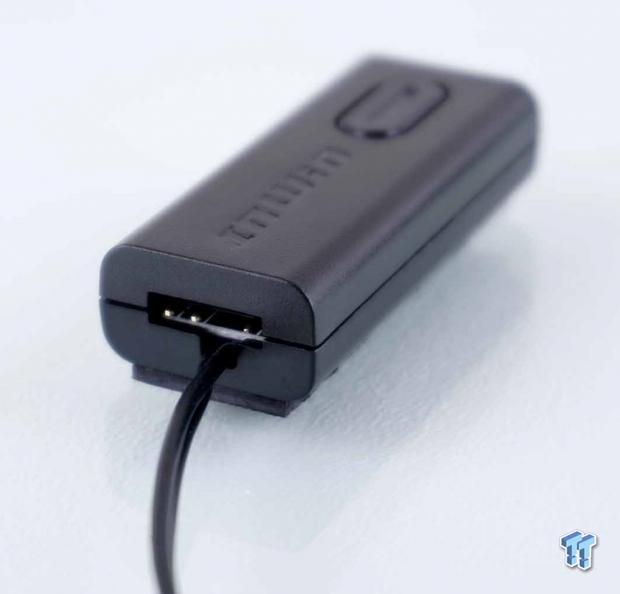 With a large-ish push button on the top of the controller to select the mode of the fan RGB lighting when no motherboard control is available, we wanted to get this second image showing where the ARGB cables from the fans connect to the controller. 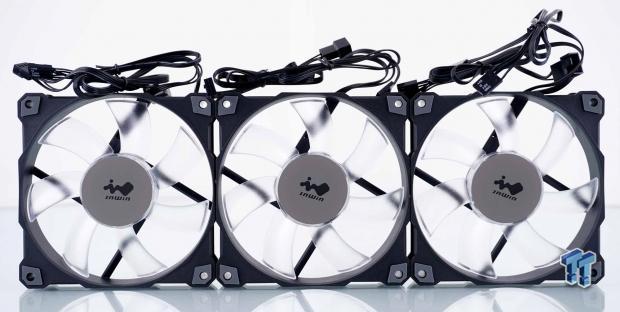 Fresh out of the box, and a white plastic bag, we can get our first look at the Jupiter AJ120 fans. The black frames are made of PBT, and each corner, front, and back, comes with a gray rubber pad for isolation purposes. The seven blades and hub are transparent, to allow the six LEDs to broadcast their light outward. Covering the front of the hubs are gray stickers with the InWin name in black. 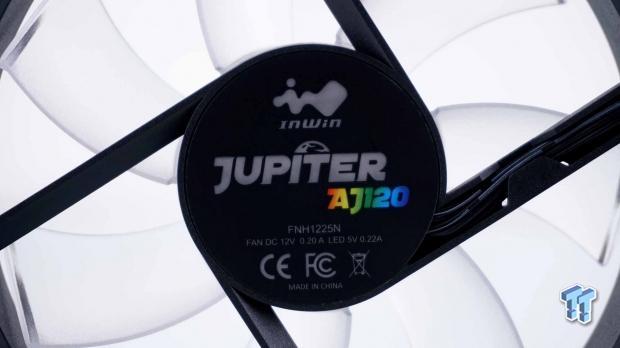 The back of the hubs is also covered, where the frame comes together in the middle. The sticker here has the InWin name and logo, Jupiter AJ120, with a bit of the planet peeking out over the name, and along with the voltages we saw in the specifications, we also get the FNH1225N model number of the fans. 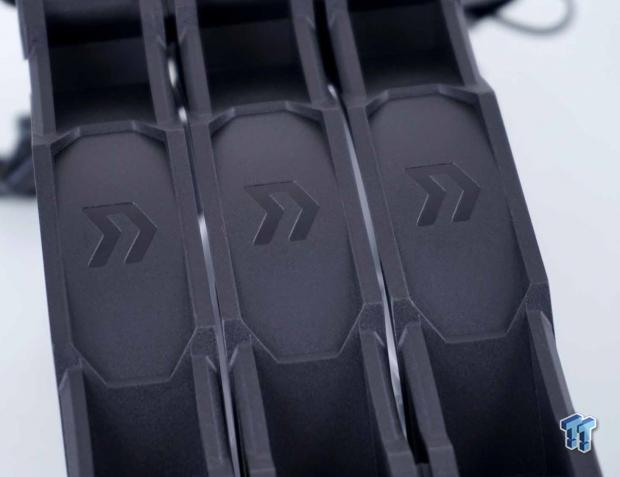 On two sides of the frame, which is not highly designed like some others, still sports the stretched octagonal shape in the middle of the frames, this time with a double-arrow icon denoting the direction of flow from the fans. 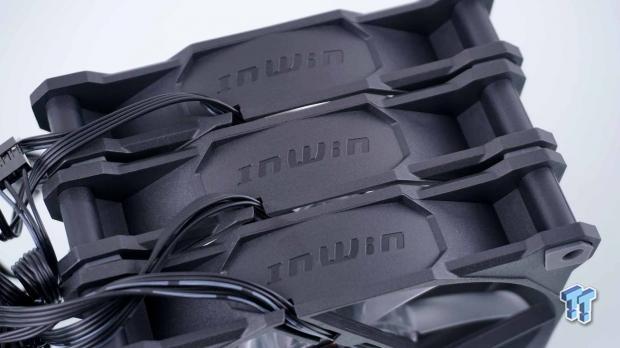 On the other two sides, we find the InWin name present. Considering many times the wires are placed nearest the motherboard tray when the fans are installed, the exposed side to the case door will have the InWin name showing! 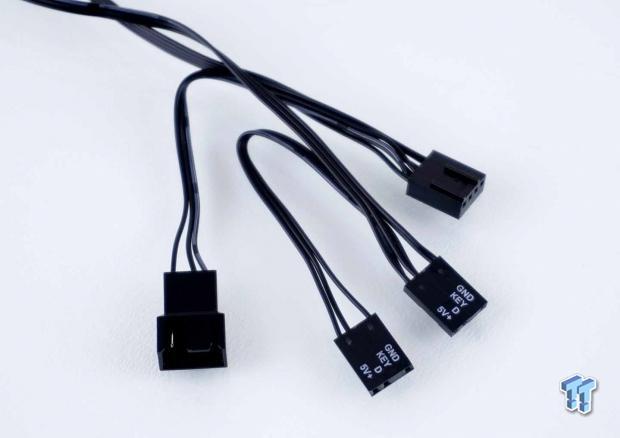 InWin is attempting to alleviate the need for splitters and adapters when it comes time to wire these fans into a chassis. The 4-pin PWM female connection goes to the power source, and the next fan connects to the male end, and from there, you keep daisy-chaining fans. Keep in mind that you may not want more than three of these on a single motherboard fan header. The fan power cables are 550mm long, where the ARGB cables are 580mm, but they also allow for daisy-chain connectivity, using what InWin refers to as the 3-pin "headers."

After ensuring the connections were all set and ready to go, we fired up the Jupiter AJ120 fans to see what we have going on. First off, the amount of light coming from these fans is about half of something like the Corsair QL-Series. With just six LEDs, there is a fair amount of illumination, but keep in mind, patterns and modes will not be articulated as well with these fans as we have seen from many others. However, airflow is quite good, even behind a dust filter, but while at full speed during this assessment, they produce 56 dB of noise!

There are many things to appreciate with the Jupiter AJ120 fans, whether you buy them one at a time, or in triple-packs. Many will gravitate to these fans based on three, maybe four things. There is no "hub" to have to deal with, nor is there any additional software to need to control anything. There is a controller, but that is intended for those without ARGB control. Otherwise, you can use what the motherboard sync has to offer.

Performance is a huge factor, as this kit from InWin is a third of the cost of many other three-fan sets we have reviewed. Static pressure, airflow, they have it, and they can even stand up to cases covered in air filters! PBT frames are a cool thing to brag about, and the daisy-chain idea works very well to ease connectivity but does make more of a headache for wire management.

Along with all that we mentioned, we still have to take a step back and ponder all aspects. While ARGB is included, it is not why you will buy these fans. We have seen much better displays of light, and we even feel that the Aurora and Polaris RGB from InWin were brighter. However, with just six LEDs in the hub, we should not expect these to compete with Capellix RGB LEDs, but that is the reality of options on the market.

What InWin can do with the limits they imposed on themselves is decent, and some may even like the more subdued delivery of RGB illumination, but if you are looking to flood the chassis with lights from a few chassis fans, these are not those fans!

No matter how we feel about the lighting, many factors are swaying our decision. At this price, of just $31, getting what we do is impressive. At $10 a fan, you might get decent airflow with crap pressure, or adequate pressure with little flow, and you might be able to get them sporting LEDs.

However, we feel that with the accessories and all that goes into the Jupiter AJ120 High Airflow ARGB Fan Kit, it is hard to find fault when it all concludes. As long as you can handle a bit of noise and intensity of the LEDs is not a deal killer for you, you will be hard-pressed to find something more affordable!

The RGB intensity may not be the best, but the Jupiter AJ120 triple-pack of fans is a steal! Plenty of airflow, plenty of pressure, along with everything you need to get underway for just over $30! InWin stepped into ARGB fans for the chassis, and came out smelling like roses!