Along with their turnkey Linkstation 200 and 500 series, Buffalo offers a modest range of business storage platforms. These offerings carry the Terastation branding and include the 3010 and 5010 series of which we have reviewed in the past. The latest solution from Buffalo however, strays away from the typical Linux in favor of Windows Storage Server 2016.

It has been quite some time since we last reviewed a Windows Storage Server platform and even then, it was the last iteration from Buffalo. The current model takes on the enclosure design from the Linux models 3010 and 5010 with a slight hardware change from Annapurna labs to Intel Atom. The full lineup keeps with the turnkey design offering several SKUs including two and four bay models with varying capacity options. The unit sent over for review is the two-bay 2x2TB solution or WS5222. 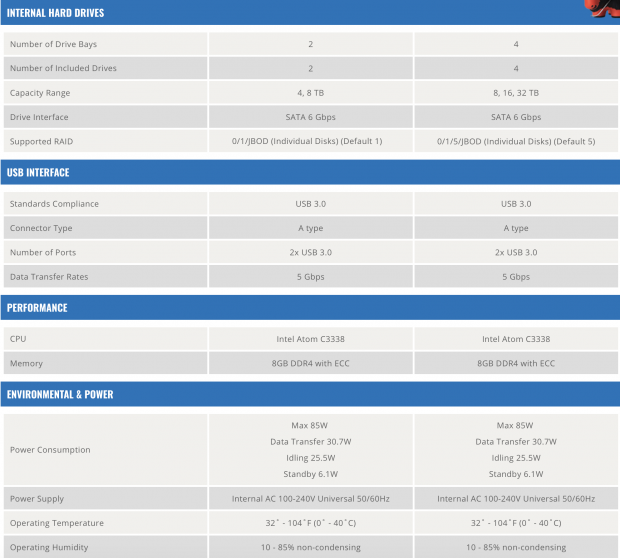 For hardware we have an Intel Atom C3338 processor operating at 1.5GHz boost to 2.2GHz, it is a two core two thread model with 4M of cache, Buffalo has paired it with 8GB of DDR4. Connectivity includes two SATA ports, two USB 3.0 and two-gigabit ethernet ports. In addition, this model offers a single 10Gbe port, from which we did all of today's testing.

Client compatibility includes Windows Server 08 through 16, Windows 7 through 10 and macOS 10.11 and later. Software options include NAS Navigator2 for setup and NovaBackup. 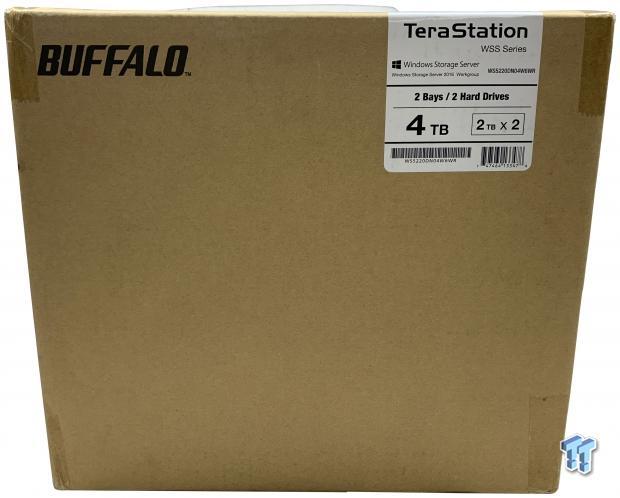 Packaging changes only slightly moving to business NAS solutions. We have the model and capacity listed along with WSS. 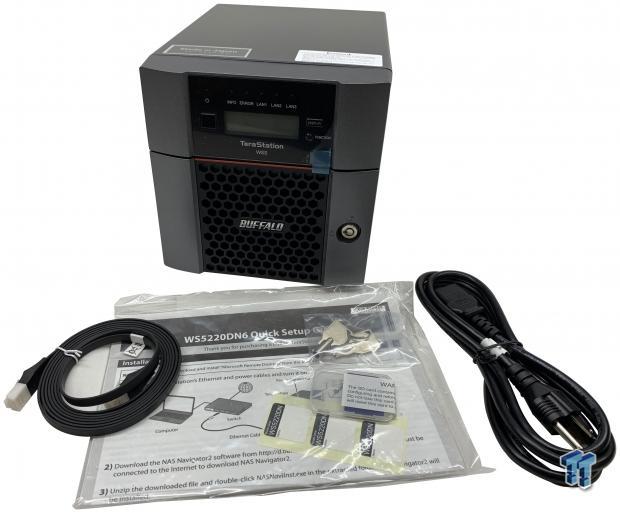 The scope of delivery includes the power cord, ethernet cable, and appliance. We also have drive bay keys and a recovery SD card. 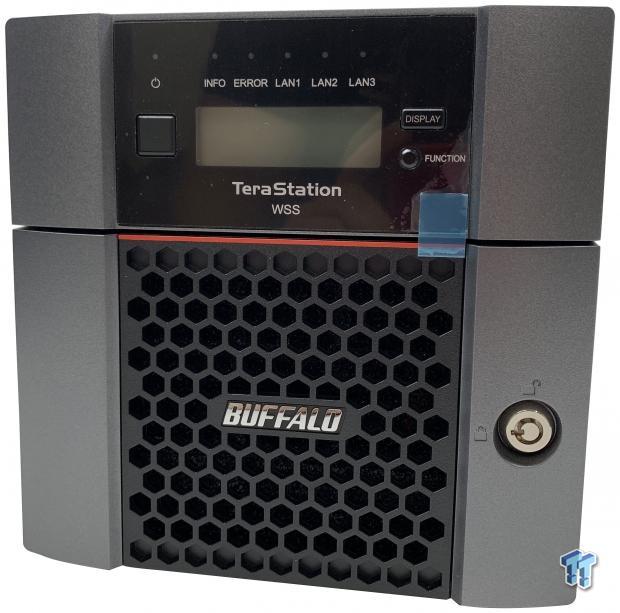 The front of the unit is identical to the 3010 and 5010 platforms. Here we have the LCD above, backlit blue with power to the left and functional controls to the right. 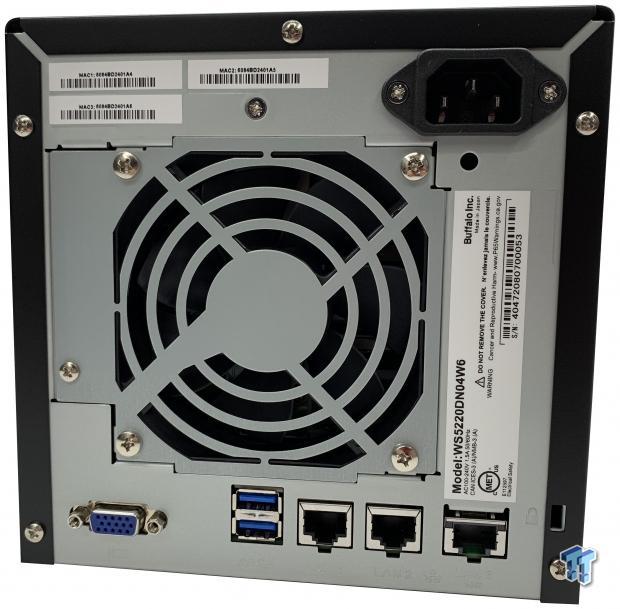 The backside offers access to dual gigabit ethernet along with a single 10Gbe furthest right. To the left, we have USB 3.0 and VGA output. 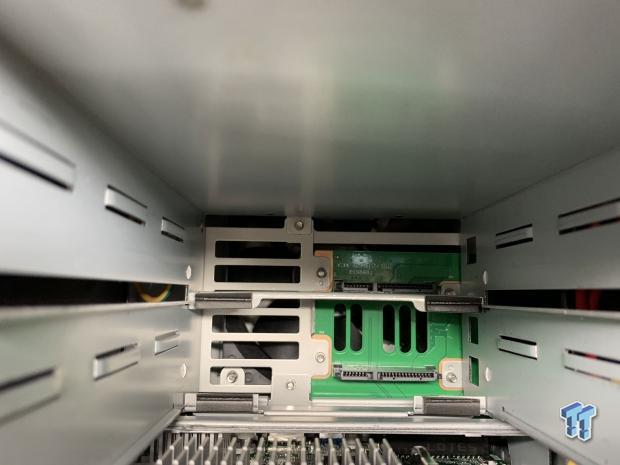 The bays offer up SATA connectivity on the backplane. 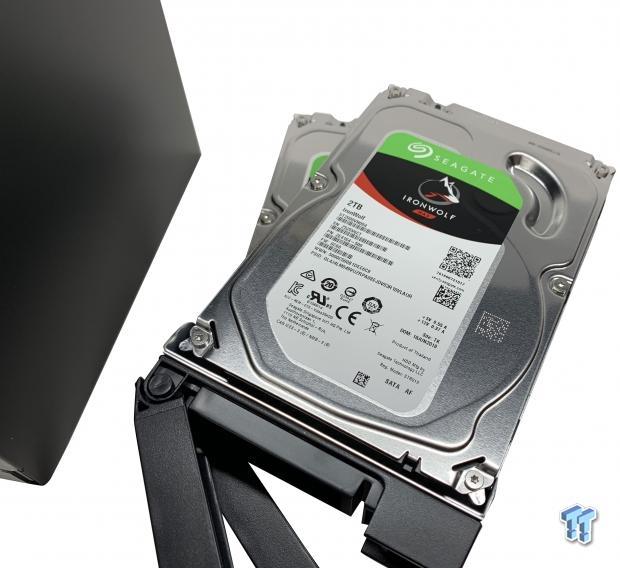 Drives used in the WS5220 are Seagate Ironwolf. 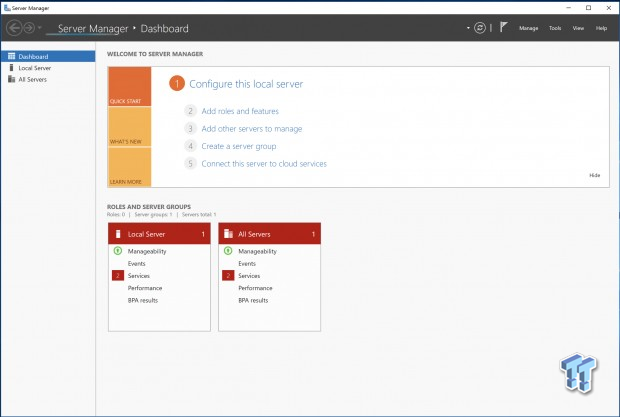 Windows Storage Server 2016 offers the same controls as 2012, built on the newer Windows 10 Kernel. That said once you launch into the admin account either through remote desktop or natively through VGA you will be greeted by the Server Manager dashboard seen above. From here you can configure services, storage, and functionality. 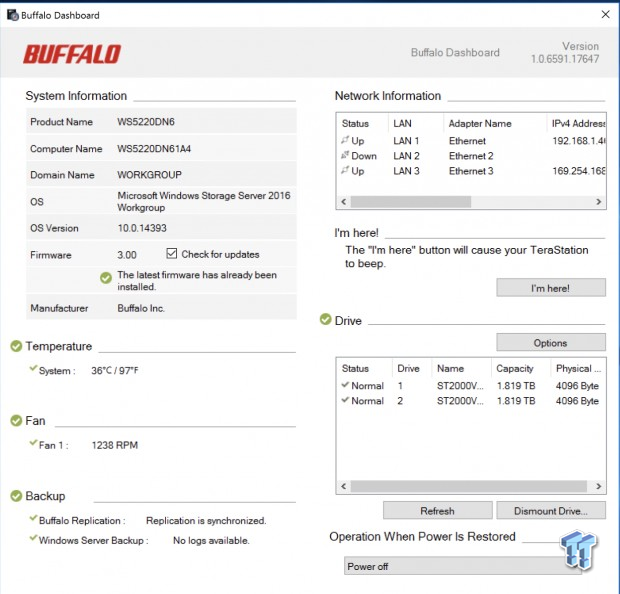 In a similar fashion to the last Buffalo WSS platform, they offer a dashboard app to aid in setting up and monitoring the appliance. To the left, we have system info including temperatures, fan speed and backup through buffalo replication. To the right, we have Network information and drive status. 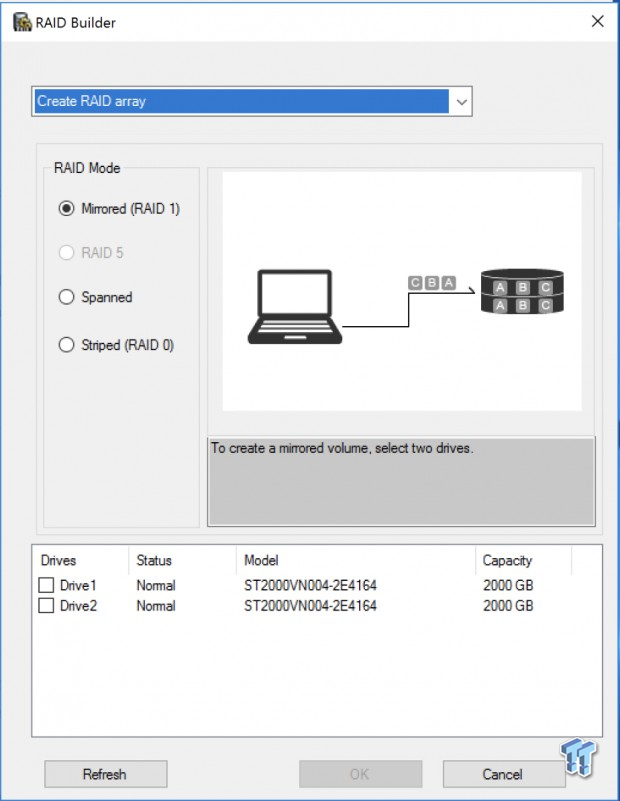 The options tab from within buffalo Dashboard offers the ability to setup arrays. These options include the default RAID 1 setup along with Spanned and RAID 0 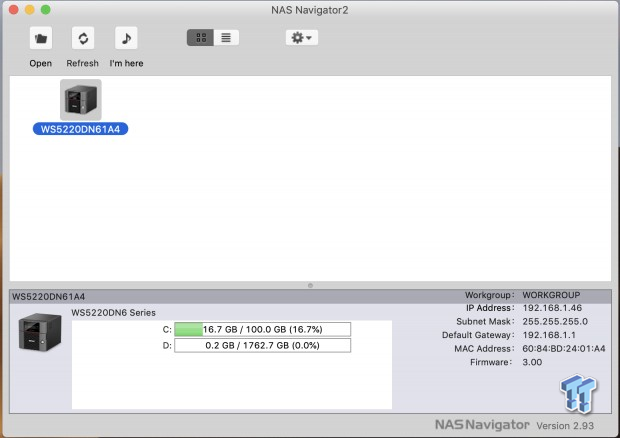 NAS Navigator 2 can aide in starting setup and checking in on drive status.

In testing the WS5220, I used the 10Gbe port with a direct connection to the test system. The NAS was tested in its default configuration from the factory. 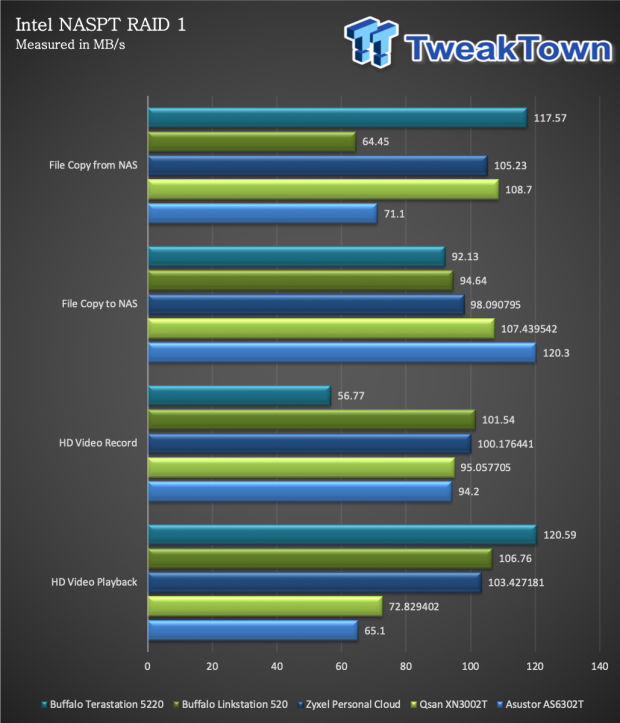 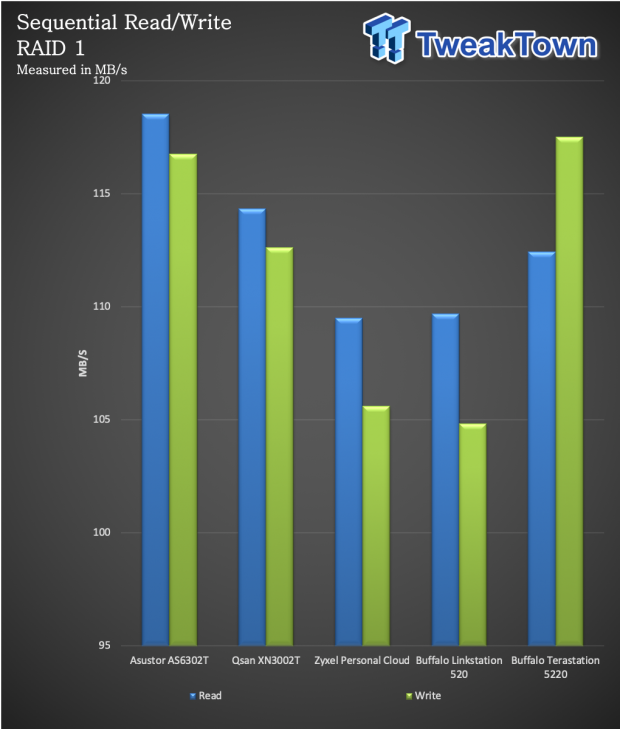 Sequential performance was on par with the best two bay platforms tested. Read topped out at 112 MB/s and write 118 MB/s. 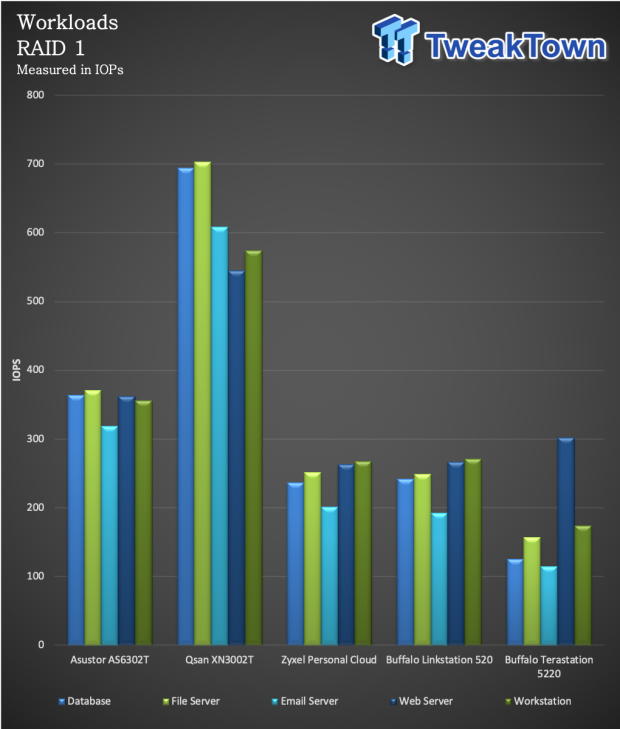 Workloads were at the bottom end for the WS5220; it actually performed worse than many Linux two bay platforms. That said we reached a peak of 300 IOPs in Web Server. 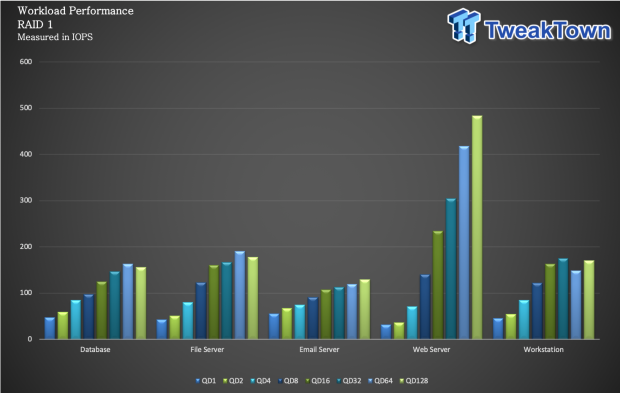 Looking at workloads with QD scaling, Web Server is a clear strong point for the Buffalo reaching 500 IOPs at QD128. On the other hand, the rest of the workloads seemed to almost be constrained by the drives with a near identical scaling pattern.

I'm decently happy with the Buffalo as a platform, build quality is on par with the rest of their lineup, and really, it's one of the last platforms to keep with a metal enclosure. Drive bays are secured behind a locked door, and even though plastic is used here, it's tremendously difficult to break into. The LCD is perfect for keeping tabs on the status of the NAS more than completing any tasks, and the blue backlight is easy on the eyes at night.

Performance is two part for me, as a NAS this platform performs just as good as many Linux based platforms we have tested. Being turnkey, I do tend to like it more just for ease of use and warranty. That said things get a bit chunky when you remote into it for setup or connect via VGA, I think the processor is underpowered for those activities and huge amount of resources Windows uses, I'd much rather seen Buffalo include a C35 series CPU or better in this case.

As far as software is concerned, Windows Storage Server certainly delivers with functionality; you can run any Windows application on this platform which lends an entire ecosystem to Buffalo without them doing all the legwork. With that though, Buffalo has created their very own Dashboard app which I do find useful for monitoring the Terastation along with the ability to make it sing when you have a rack of these units deployed.

In closing, the two-bay platform is suitable as an entry-level file server for SMB that need to stick with Windows platforms, for those that can swing outside the box for a Linux platform from Synology, Qnap or Asustor you can certainly save yourself a few hundred dollars.

The Bottom Line: If youd rather a Windows system, the Terastation WS5220 lineup offers a great entry-level turnkey platform.