They aren't bothered much by dust filters, they are simple and clean to install, they are innovative, they deliver the same RGB options as any supporting motherboard, and they don't cost a small fortune! All great reasons why the In Win Silent RGB Case Fans will be right for your next build.

In Win, like many other companies is making the push to impress with new RGB fans to add to any chassis or even a CPU air cooler, but are doing it in a way in which we have never before seen employed. One of their new offerings, which we will be discussing in this review is the Polaris Series of fans. From what we can gather, there are three variations in the Polaris fans; the Polaris LED, Polaris RGB and Polaris RGB Aluminum fans. The Polaris LED fans are offered with white, red, green, and blue LED options, not all at the same time, of course, each color is offered in its own set of fans. The Polaris RGB fans work with motherboard control from ASUS, MSI, GIGABYTE, and ASRock, and so do the Polaris RGB Aluminum fans, but they do have an aluminum frame surrounding the blades rather than the clear plastic of the Polaris RGB.

Specifically speaking of the Polaris RGB silent case fans, we find that they can be purchased in 2-pack or 1-pack packaging. However, it is important to note, that the single fan packages will not work without the twin pack, but fans can all be daisy-chained together. These fans are currently offered in 120mm size only but are built of PBT plastic and polycarbonate, and each fan will only draw 1.2W at 0.10A. These fans which are geared for silence will spin in a range of 500-1280 RPM, delivering just 43.31 CFM of airflow, with 1.26 mmH2O static pressure. These sleeve bearing fans are wire free out of the box, as the Polaris fans also come with an assortment of cables which source power and RGB signal, and also have much shorter cables which link each fan to the next one in line. Along with 35,000 hours of runtime, the Polaris RGB fans are backed with a two-year warranty.

Shockingly, In Win is not trying to empty your wallet with the Polaris RGB fans either. As we looked around, we were able to locate the Polaris RGB twin-pack at just $39. We also see a listing for the single packs to add on to the twin-packs, but at this time there is not a price listed, as they are marked unavailable. On the In Win eStore, we were able to find out that the single-pack fans are to be sold at just $20 per fan. Compared to many other RGB 120mm fans on the market, we are honestly a bit surprised to see that the pricing is on point with them, yet In Win took an innovative approach to connectivity, which should have increased cost, but is not being passed on to the consumer. 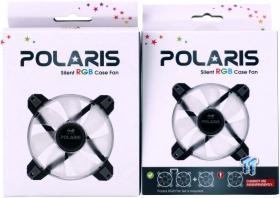 On the left is the packaging for the Polaris Silent RGB Case fans twin-pack, and on the right is the packaging for the single-pack fans. Both are similar to what is offered, but the primary point to address is in the blue bar at the bottom of the box at the right. It shows that the single –pack fans are to be added to the twin-pack, and with red to highlight it, it explains that the single-pack fan cannot be used independently. 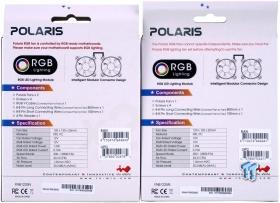 On the back of the packaging, we can see what can be found inside of the box, as well as the specifications for the fans inside. We did pass right by the name at the top, as well as the red text explaining that to get the RGB illumination, you must have a compatible motherboard with 4-pin RGB headers. Without the 4-pin RGB connection made, the fans will still spin, but there is no illumination in any form.

The Polaris RGB fans are attractive with the thin round frames and the corners with rubber isolation pads. The frame is clear, much like the seven blades that spin on a sleeve bearing. The LED lighting is contained in the hub, where six RGB LEDs will not only make the hub and blades glow, but the clear frame also absorbs some of the light and glow as well. 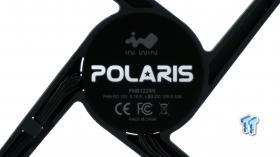 Delivering a high-end look and feel, even the back of the fans are dressed up. Rather than paper or plastic stickers, the cover on the back of these Polaris RGB fans is made of metal. This allows In Win to offer the name in a stylized bare metal design, as well as to offer the FNB1225N model number and the power requirements. 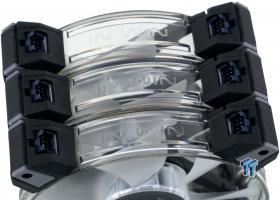 In this image, we would like to address two things. The first is that on all four sides of the fan frame, the In Win name is etched into it, so when the LEDs glow, the name stands out. Secondly, and most importantly, we can now see how the Polaris RGB fans are connected. In this model, there is not an addressed in-side or out-side, but the blue 8-pin connections are how we get the fans spinning and illuminated. The main cable goes into any of the three fans, and then you merely daisy-chain short or long cables fan to fan. 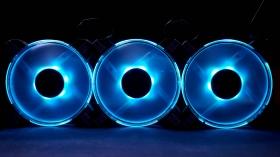 While the In Win Polaris RGB fans will deliver any color, your motherboard is set to run, whether that be solid colors, various modes, or a cyclical display of all the colors available through the motherboard BIOS options. We chose only one of the colors to display in this image, but believes us, the fan cycled through all of the same colors the chipset cooler on our ASRock X299 OCF motherboard did.

Connectivity is fairly simple to accomplish as well. What takes the most time is locating a spare fan header and RGB 4-pin header on the motherboard, and connecting the appropriate cable to it. There is a Y-splitter in the main cable, which allows the delivery of RGB LED signals for RGB LED light strips too. At the other end of that cable is an 8-pin connection which needs to be made to any of the fans you have installed. After that, you can choose if you need the 100mm or 800mm 8-pin to 8-pin cables, and in series, make the connection to the other fans. We would advise that if going beyond three or four fans, you may want to source power from a fan controller or Molex adapter.

Airflow from the fans is sufficient to provide cooling inside of a chassis, and when placed behind a restrictive dust filter, the pressure produced allows the fans not to be reduced as much as others we have used in the past. We were unable to verify fan speeds in Windows because the RPM sense wire connected to the motherboard does not deliver that information to software, but the BIOS does read the maximum speed at 1278 RPM. At full speed, we are pleased to report, that there is only 32 dB of noise delivered in an open-air environment. While the fans do produce in airflow and cooling, the amount of illumination is what will sell these fans. You will need to have a compatible motherboard with RGB support for external products, but for those that do, In Win has some of the easiest fans to install and operate than most we have seen.

While most companies will use the RGB feature to take a stab at your wallet, that is not the case with the Polaris RGB fans which we have just seen. In Win eliminates all of the extra wires, did not need to add a hub and software to make the fans match the motherboard or deliver fancy colors and modes, and passes the savings on to us. Considering we can get the twin-pack kit for $39 and adding more fans costs only $20 per fan, this is an affordable way to dress up and customize any chassis on the market which supports 120mm fans. TO us, you can find fans with more spectacular features and lighting capabilities, but they come at more than twice the price. The In Win Polaris Silent RGB Case Fans are the perfect mix of style, features, functionality, and affordability. If we were going to dress up a chassis, our money would be going to In Win.

The Bottom Line: They aren't bothered much by dust filters, they are simple and clean to install, they are innovative, they deliver the same RGB options as any supporting motherboard, and they don't cost a small fortune! All great reasons why the In Win Silent RGB Case Fans will be right for your next build.