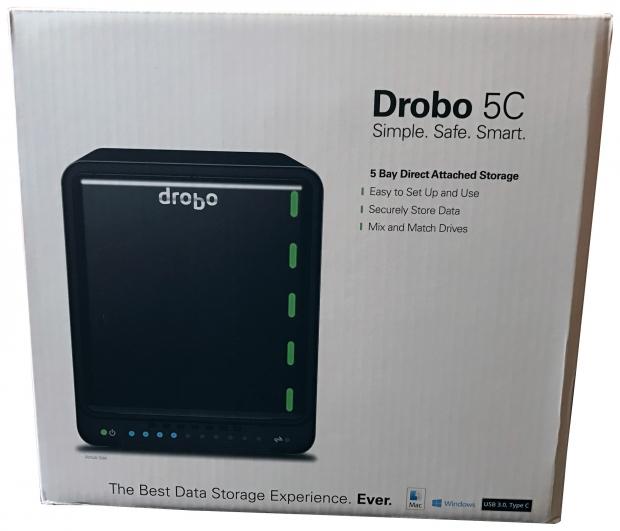 The 5C is the latest addition to the Drobo family. It joins the Mini, 5Dt, and 5D that I reviewed three years ago. This latest generation holds true to the iconic and recognizable design on the outside but inside Drobo has upgraded this solution to take advantage of USB-C.

Drobo uses a type of Hybrid RAID with all of their platforms called BeyondRAID. This type of RAID allows you to mix and match drive sizes or to upgrade on-the-fly simply by removing and adding in a larger capacity drive. Further hardware features include an onboard battery backup system for the NAND flash onboard the 5C, which takes any in-flight data from your hard drives and stores it in flash should you ever have power issues.

The Drobo Dashboard is the software platform that gives you complete control of your storage with Drobo. This too hasn't changed much over the years although it does include Time Machine support that allows you to control how much storage you want for MacOS backups.

The specifications above go over in a bit more detail the features of the 5C. This, of course, is a five-bay appliance supporting 3.5" SATA disk drives with no capacity ceiling. Operating system support includes MacOS 10.10 and above along with Windows 7 through 10. BeyondRAID features include Thin Provisioning, Instant Expansion as I explained above, and single or dual disk redundancy. File systems of choice are NTFS and HFS+.

The MSRP of the Drobo 5C comes in at $349.99 with a one-year warranty in the states and two years inside the EU.

Packaging for the 5C carries an image of the appliance on the front. To the right, we have marketing information and down below supported operating systems and connectivity. 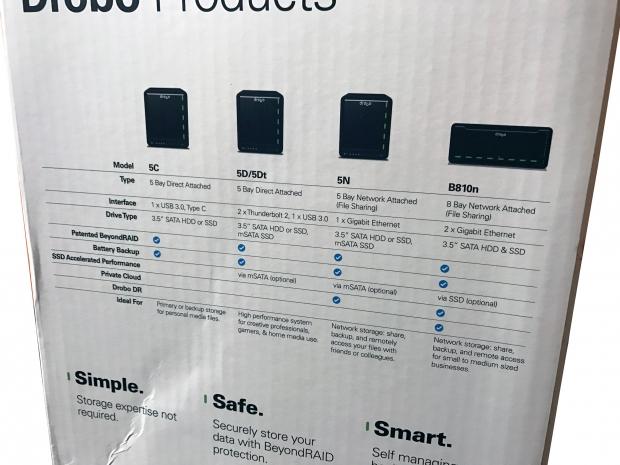 There is a full comparison of the Drobo product line on the side of the box that includes the B810n and 5N Network appliances. 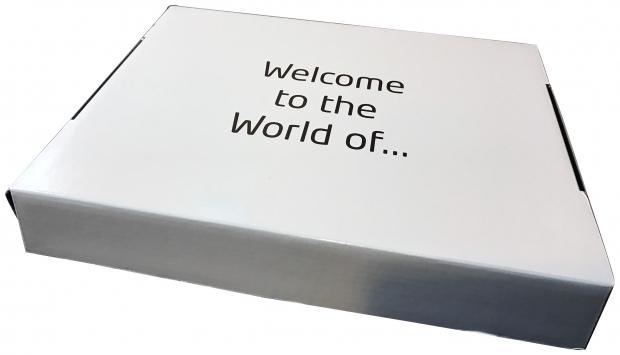 Drobo has kept with the amazing unboxing experience, the box above greets you upon opening. 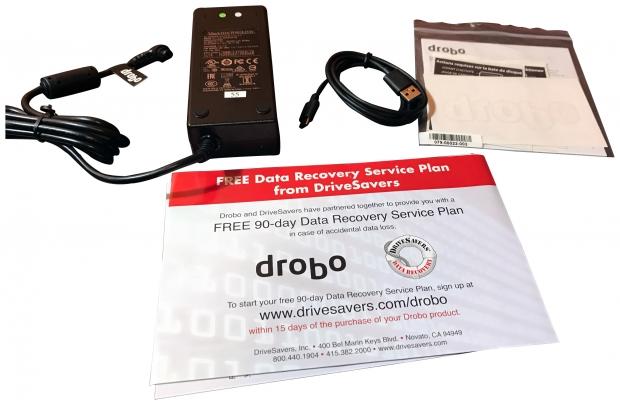 The scope of delivery includes the power adapter, Type-C to C cable, and reading materials. 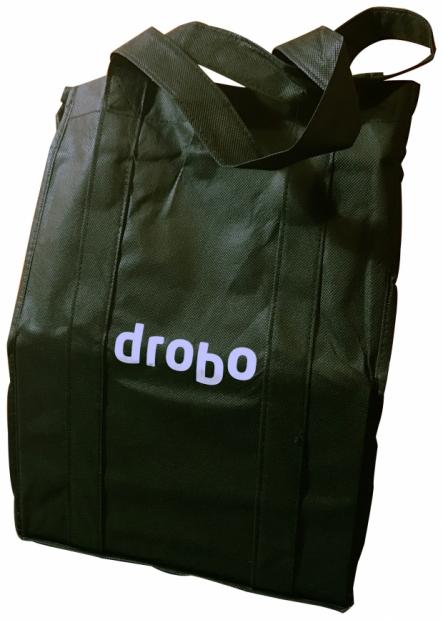 The 5C comes in a protective cloth bag.

The bottom of the Drobo houses regulatory info to the right and model information to the left. 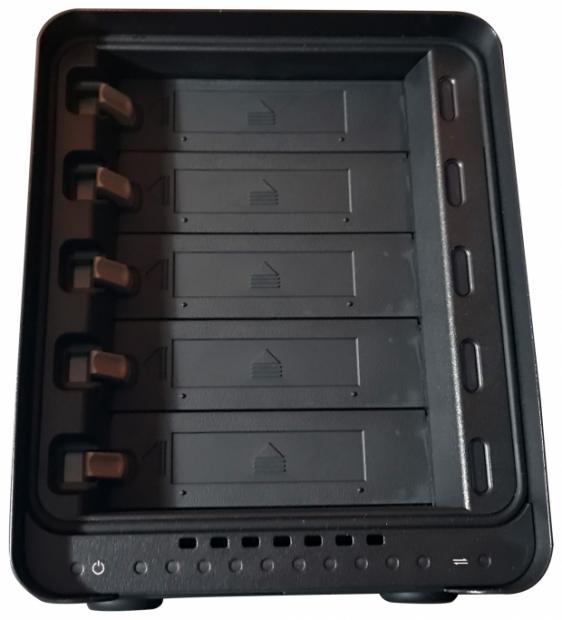 The five drive bays of this appliance are tool-less without drive trays. Each slot has its LED to the right while the entire unit has a range of LEDs at the bottom. 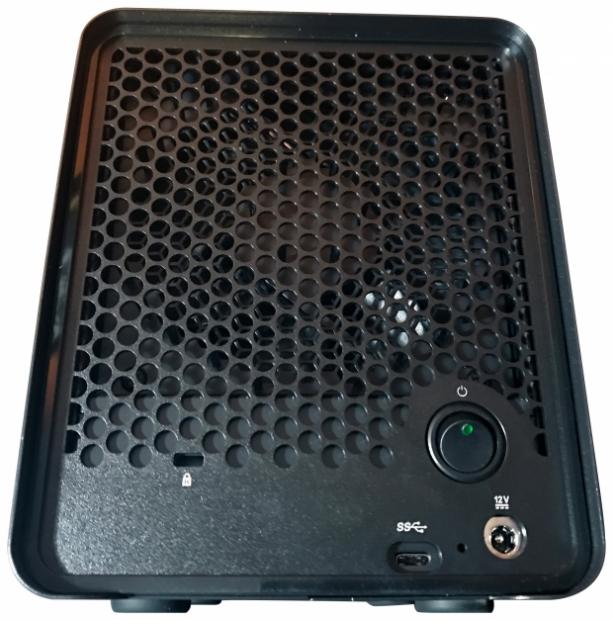 The back of the unit houses the power switch, power input, and USB-C port. 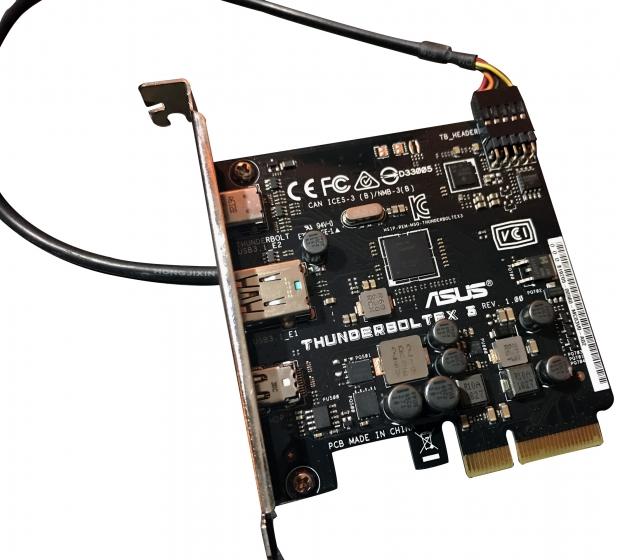 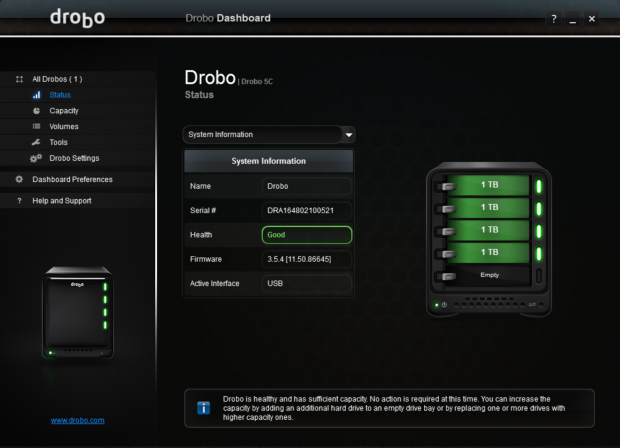 The operation of your Drobo 5C starts with the dashboard. I'm using four Toshiba 1TB drives with this unit today and starting from the top the status menu gives an overview of the 5C. To the right, we have a diagram of the bays and installed capacity while the left side shows the interface we are using and firmware revision. 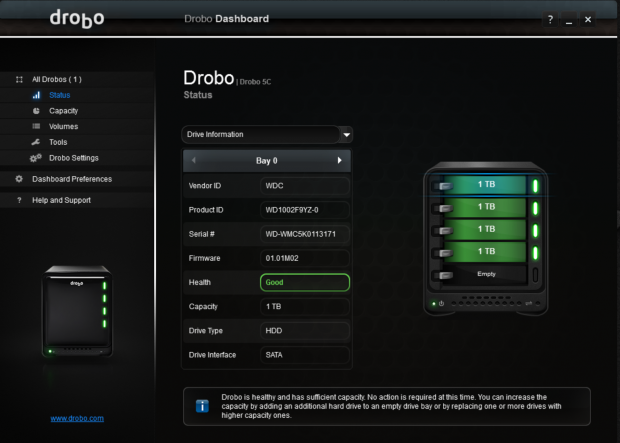 Selecting a particular bay will give us information on the installed drive to the left. 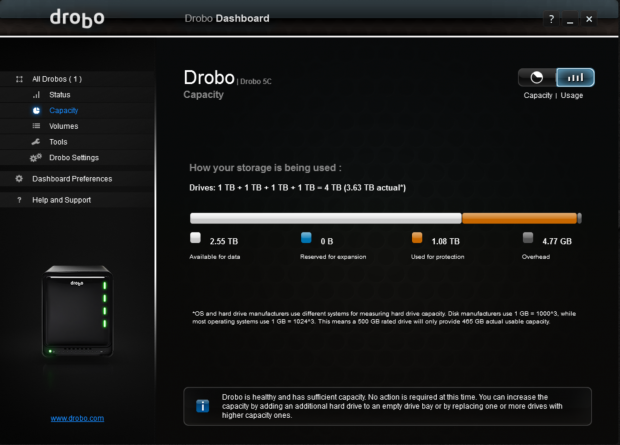 Moving down to the capacity menu, we can see our data usage and its layout. 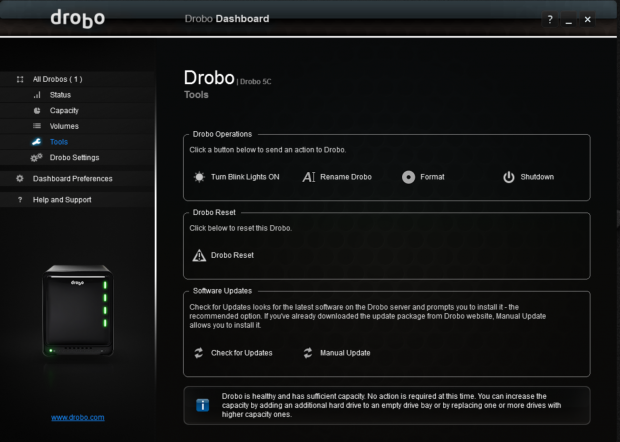 The tools menu, allows you to manage the Drobo by turning LEDs on or off, formatting a volume or updating the firmware. 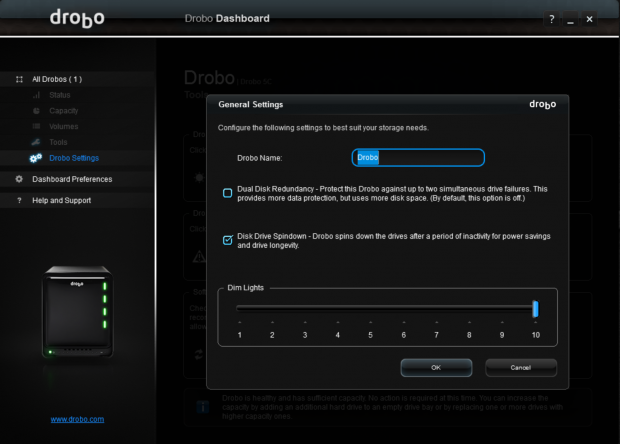 Diving into settings, you can choose single or dual drive redundancy and enable or disable drive spin down. 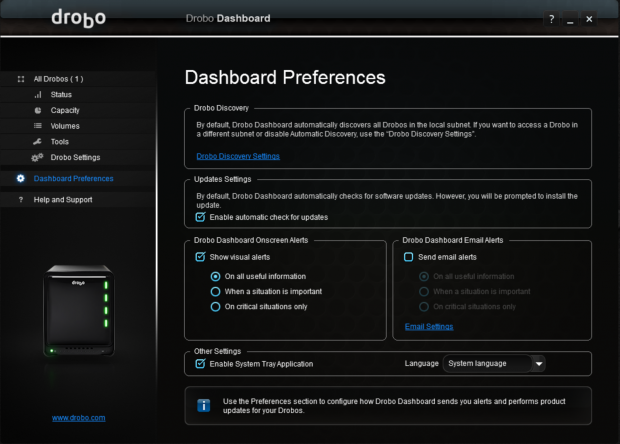 Settings for the software itself can be found in preferences. Here you can setup alerts via email and configure updates.

As you can see from our first chart below, I ran testing on both Toshiba HDDs and Phison SSDs each with a 1TB capacity in single and dual redundancy modes. 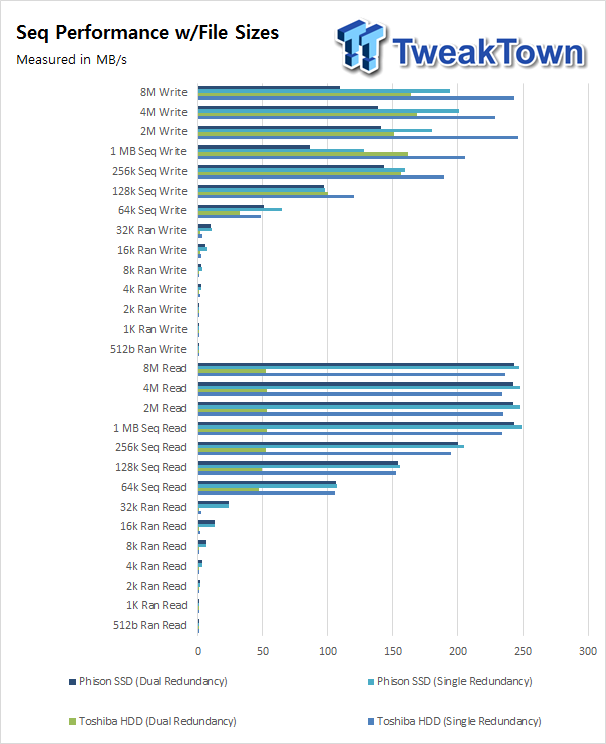 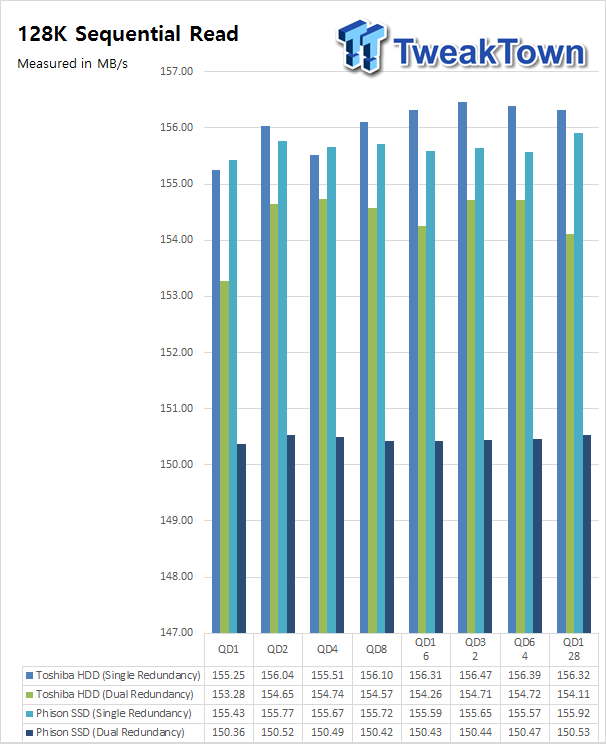 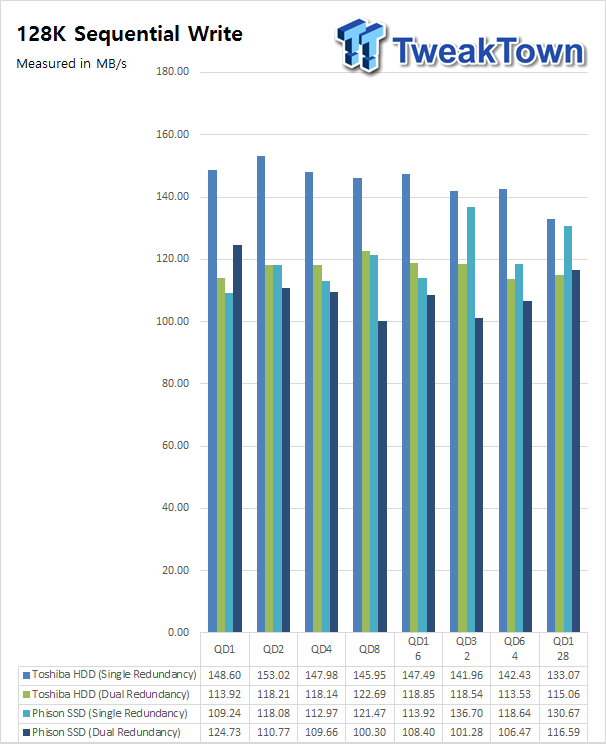 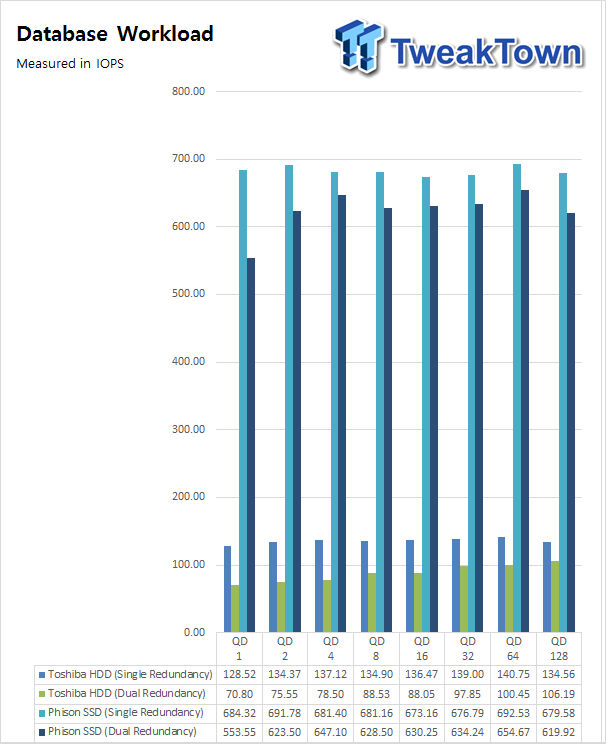 Workloads show the large performance gap between using SSDs over HDDs when not dealing with large sequential workloads. The Phison SSDs in single and dual redundancy brought in 650 IOPS and 690

IOPS respectively, while the HDDs peaked at 140 IOPS for single redundancy and 100 IOPS for dual redundancy. 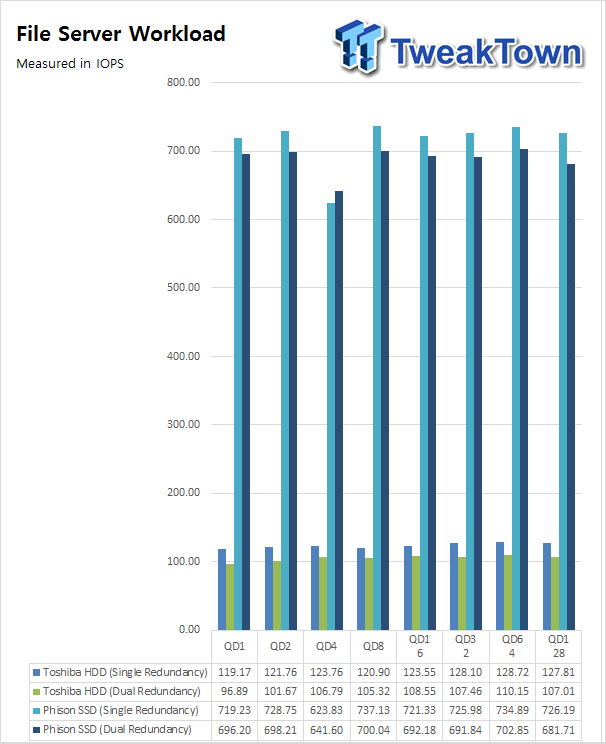 File server was similar with peak performance coming in at 734 IOPS. 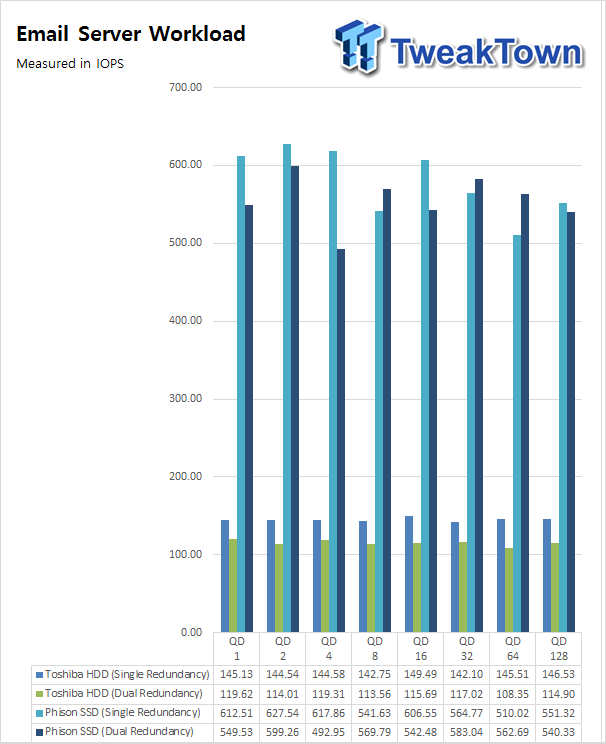 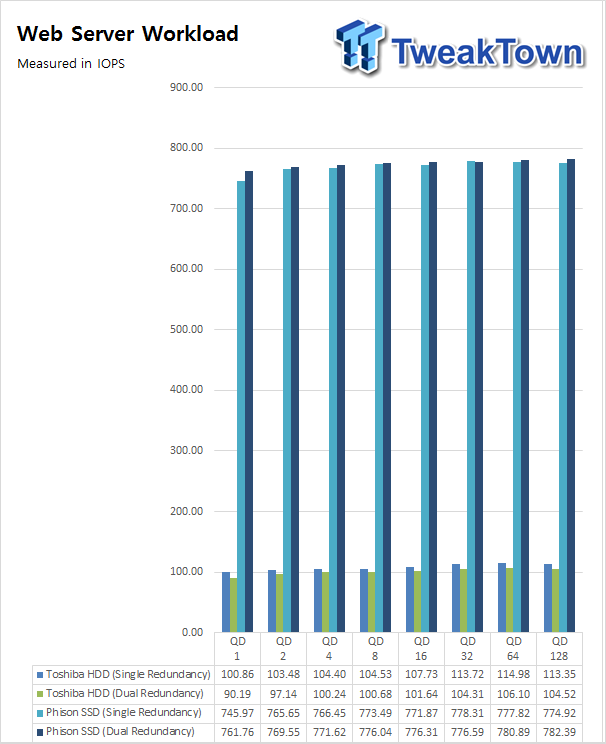 Web Server has the HDDs topping out at 115 IOPS single redundancy and the SSDs 778 IOPS. 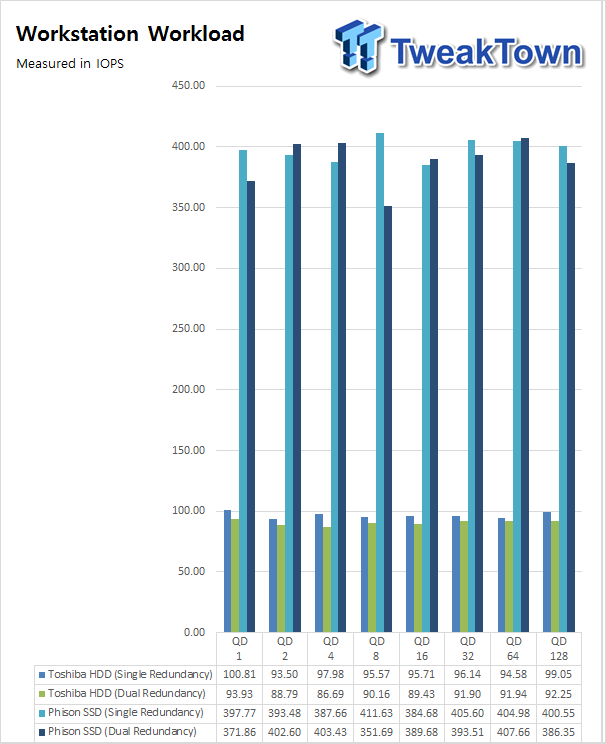 Workstation showed the HDDs still hovering around 100 IOPs for both single and dual drive redundancy while the SSDs were slightly slower at 400 IOPS. 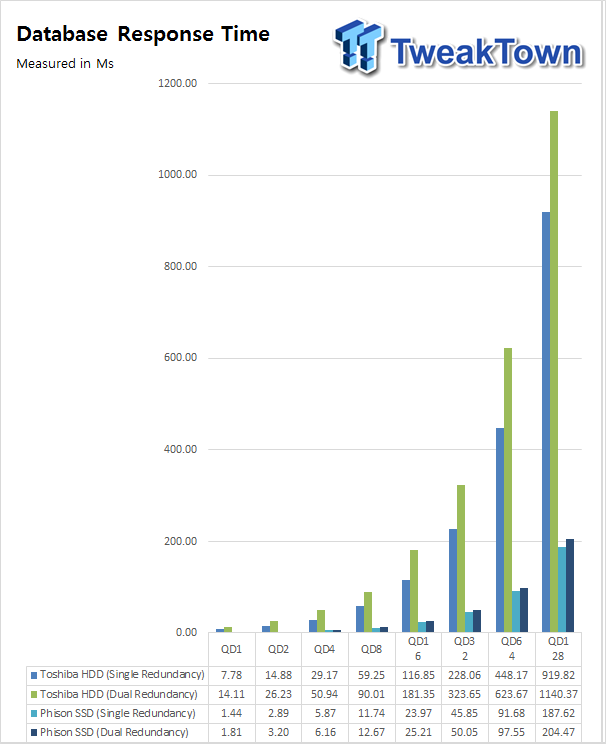 Latency is another big area you will see improvement with SSDs. In our Database workload, we have a 730ms difference at QD128 between SSD and HDD in single redundancy response, while dual redundancy increases that to 930ms. 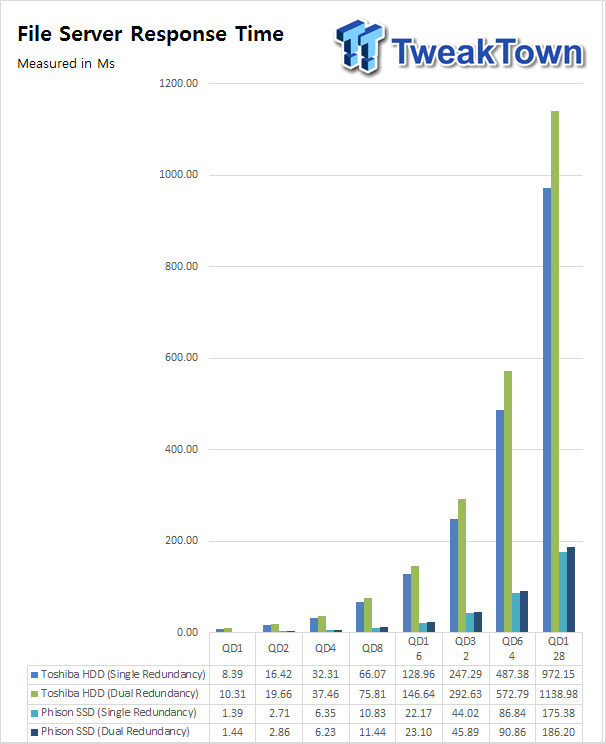 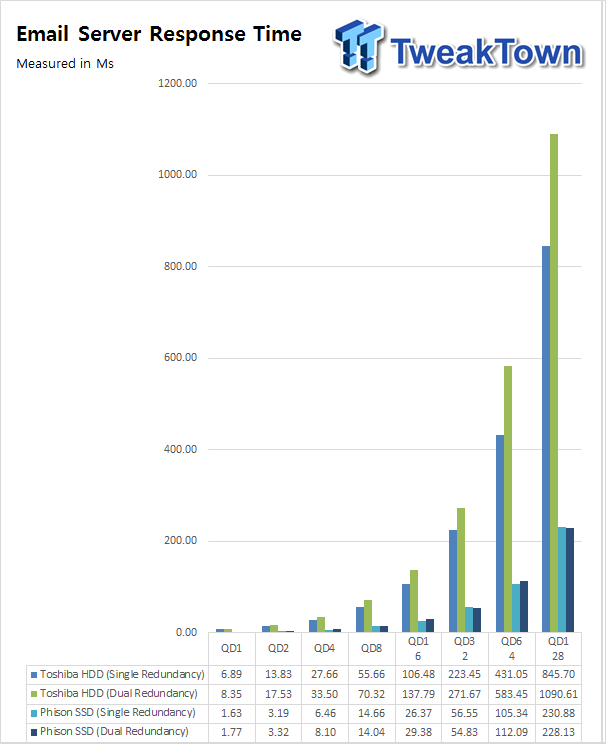 Email Server had a difference of 615ms between drives in single redundancy mode and dual came in at 862ms difference. 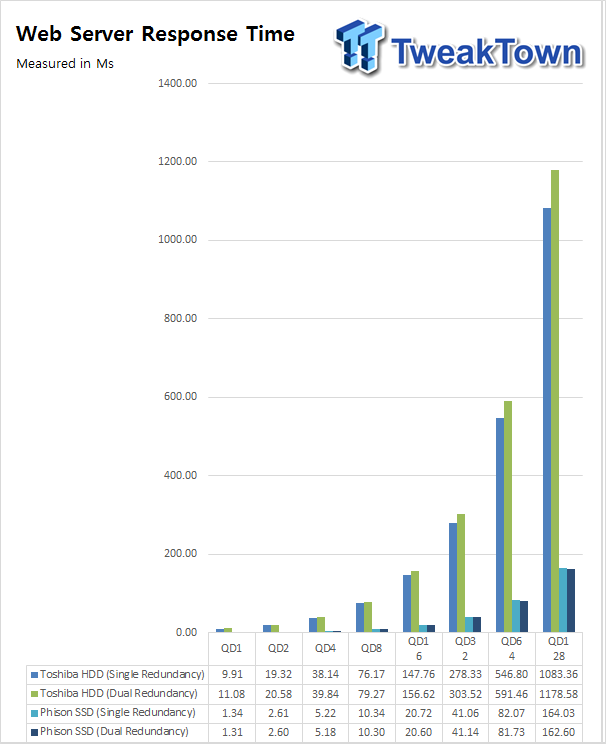 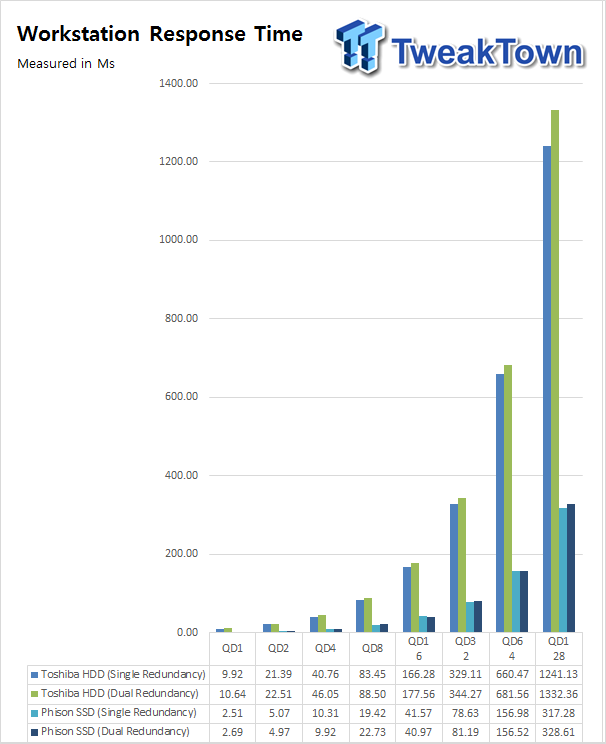 Workstation had the same 9ms starting point and topped out at 1332ms for the HDDs while SSDs started at 2.5ms and ended at 328ms.

It has been awhile since I used a Drobo appliance, a little over three years since my last review of the 5D. It's nice to see in that time Drobo has stayed true and still delivers the same quality I felt back then. The 5C is a solid unit, a desktop tank especially with drives installed. It is also very quiet for its size and with the USB-C connection, easy to setup and use.

Workload performance topped 650 IOPs with SSDs followed by 720 IOPs in File Server. That same level of performance was seen through the rest of our workloads and transitioned over to response times where we saw some solid performance from the SSDs at QD128 and the HDDs did well up to QD32.

The Drobo Dashboard hasn't changed too much over the years and thus was very comfortable and easy to navigate. Switching from single to dual drive redundancy is as easy as clicking a box and the resync process is rather quick compared to a RAID rebuild.

Overall, I like the Drobo 5C. It's not much of an upgrade if you have a 5D or 5Dt, but for those new to this market, it provides is a solid first step to securing your data.

The Bottom Line: Drobo is a lifestyle and the 5C adds to this lineup with the latest in connectivity and data security.