With their second-generation Echo Dot, Amazon has raised the bar on what a digital assistant should be. The Echo Dot 2 is simple to setup and control, and with an MSRP of $49.99, it's within reach to a large consumer audience.

I never bought into the Amazon ecosystem, and that includes all Fire, Kindle, Tap, and Echo products. For some reason, I have always generalized that all digital assistants were going to be the same. While Siri has come a long way since my iPhone 5, she still has issues understanding American English, her native language. Being a Prime member, I received an email a few months ago from Amazon noting they had created a second-generation Echo Dot, and they would be hitting shelves late October. After reading quite a few positive reviews, I decided to take a chance and now a week after receiving my Echo Dot, I'm ready to share my thoughts.

Since the launch of the first Echo in November of 2014, Amazon has been trying to push Alexa into more and more homes, but the initial cost has proved to be overwhelming for many. In fact, the standard model still goes for $179.99 and the first-generation Dot, while now EOL, launched with an MSRP of $89.99 earlier this year. With the release of the latest Echo Dot 2, Amazon is going in a little aggressive. No longer do you have to own an Echo to purchase an Echo Dot. In fact, anyone can buy direct and with an MSRP of $49.99, it should be much easier for those wanting the technology to achieve just that. 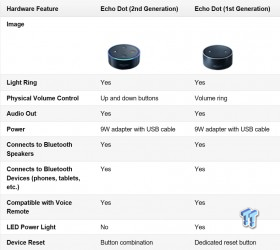 As you can see in this image, Amazon has made some very minor changes between versions. It comes down to the volume control having physical buttons over a volume ring, the removal of the LED power light, and a new button combination rather than a dedicated reset button. Overall the size is just a touch smaller on the new version. Features of this new Echo Dot include the new ESP or Echo Spatial Perception that enables homes with multiple units to have the closest respond to your requests in addition to a much-improved voice recognition. On the hardware side, we have dual-band 802.11 b/g/n, Bluetooth, an array of seven microphones, and a small speaker for voice playback. 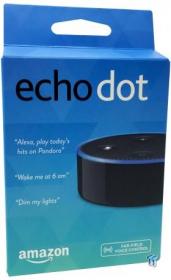 Packaging is rather simple for the Echo Dot 2 with an image to the right and some examples of what Alexa can do listed to the left.

On the spine of the box, Amazon has included a list of skills you can teach Alexa. 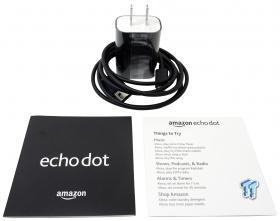 The scope of delivery includes a 9W power adapter with a good-sized USB cable next to the manual and a list of functions to try with Alexa. 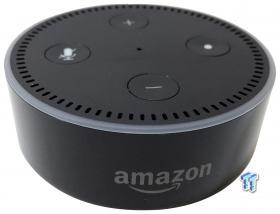 The second-generation Echo Dot carries a glossy finish with branding on the front. On top, we have the volume up and down buttons along with mic mute and the action button to the right. 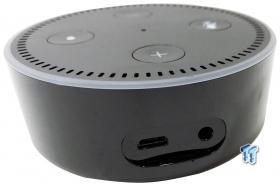 Around to the back of the unit, Amazon has placed the micro USB input for power and 3.5mm audio output. 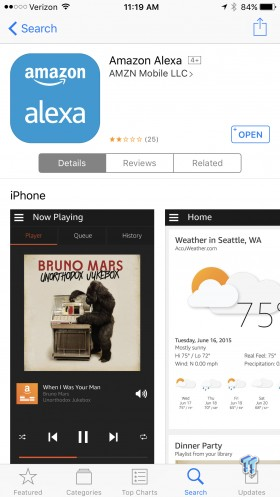 The Alexa App had some serious issues in the past with login loops and such. For me, I am running this setup process with an iPhone 7 Plus 256GB and had no issues at all with the app. 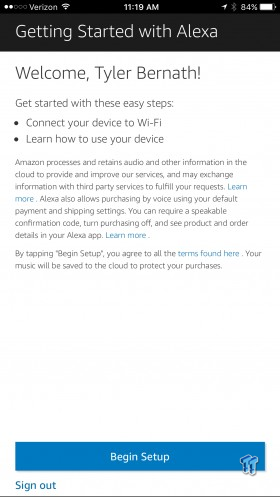 So, setup starts with a greeting from Amazon. At this point, we have logged into our Amazon account in a previous screen. 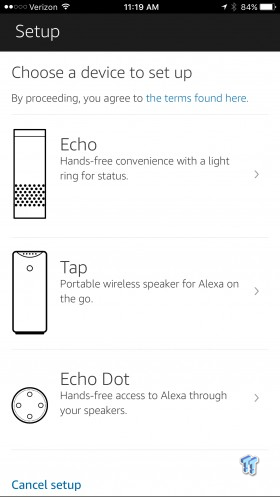 Setup will then move onto asking which device you want to setup. 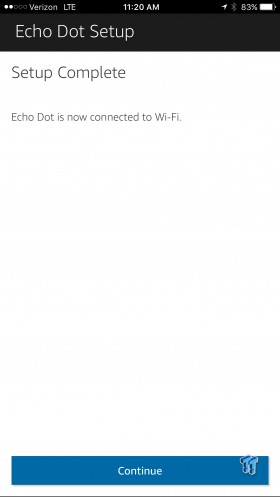 There are several steps before you get to this point, but following the instructions on screen, we were done in a matter of minutes. 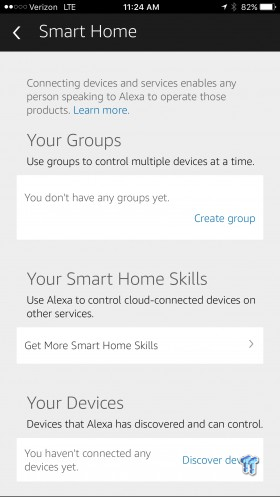 Once you have your Echo configured, you need to teach Alexa things called skills. These are small programs or scripts that allow her to talk to smart home devices from a whole host of vendors including TP-Link, Belkin, D-Link, and even Nest. For each device vendor, there is a skill that is downloadable. You can then control devices individually or use groups to control multiples.

I have had the Echo Dot since the 20th of October and seeing as I'm writing this Monday morning the 24th of October, Alexa and I are going through the honeymoon phase at this point. It's those first few days where you fall in love, and nothing can go wrong. Alexa is the best digital assistant I have used, far better than anything Apple or Microsoft has created in the last decade - and it just comes down to one thing, you don't have to yell or enunciate properly, Alexa understands and delivers.

In my home, I have setup everything from my Nest Thermostat to D-Link Smart Plugs, TP-Link Smart Bulbs and she can even control the RGB of my Philips Hue. It doesn't stop there either as the list continues to grow every day. Build quality is good for such a small device, although I'm not a fan of glossy black finishes just because of the barrage of dirt and dust they collect. Otherwise, the buttons have a good feel to them.

As far as the functionality goes including the app, I'm impressed. Setup was simple; just a few steps that included switching Wi-Fi networks and it was done. Navigation through the app is done with a sidebar that lets you configure account settings and install skills for the devices in your home.

One thing to note, Alexa knows your devices by the name you gave them when installing. For example, my thermostat is called Office in the Nest app, so I must tell Alexa to change the "Office temperature" rather saying anything like change the "thermostat to said degrees." Those little nuances are throughout Echo functionality so make sure you name your devices appropriately during setup.

The Bottom Line: With their second-generation Echo Dot, Amazon has raised the bar on what a digital assistant should be. The Echo Dot 2 is simple to setup and control, and with an MSRP of $49.99, it's within reach to a large consumer audience.