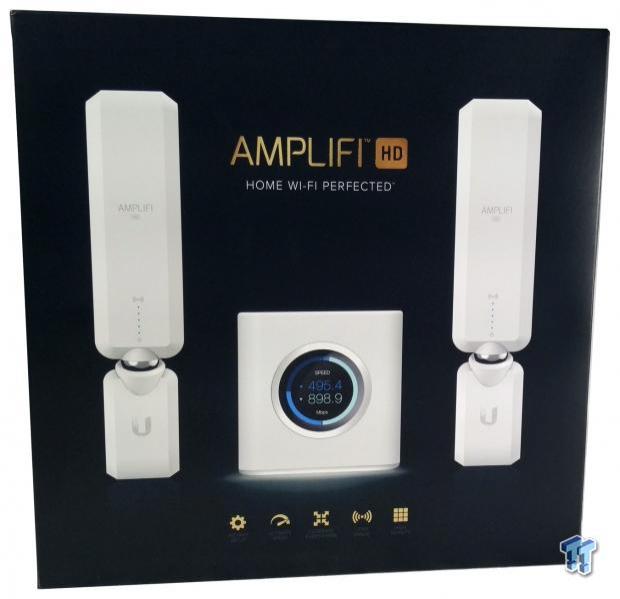 Wi-Fi for our homes and businesses is an ever changing platform. The minute we purchase a fancy new router, the next best thing is being rolled off of assembly lines, packaged up, and sent to retailers. For the longest time, the single node wireless environment has served many of us quite well but within the next year that entire way of thinking will be gone, a thing of the past, adios!

I say this as I have just setup my first Mesh network in my home, and while admittedly I have used multiple APs for years, I am impressed! The simple fact is Mesh is the wave of the future bringing enterprise technology into your home with a complete system that floods your house with waves of 802.11ac. The Amplifi HD is the flagship, leading the way into consumer homes for Ubiquiti and with this platform, you get two access points offering AC1750 technology, along with its base station that provides the same 450Mbps on the 2.4GHz band and 1300Mbps on the 5GHz band.

Also, the rear of the base houses four gigabit LAN ports next to a single WAN and USB port. The Mesh points, as mentioned above, offer the same technology and can be placed wherever you need to expand your wireless network and with an integrated signal indicator on the front of the units, positioning them for the best performance is quite simple. To top all of this off, this unit features a full-color touchscreen and can be controlled by an app available for both Android and iOS. 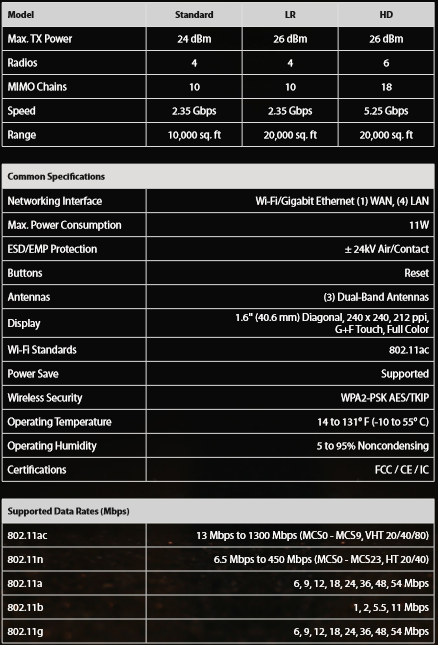 The specification sheet from Ubiquiti goes over all three models including the standard and LR. The HD, which is what I have in house, is the top model with six radios and 18 MIMO chain capability. Further down, we have the interfaces listed followed by power consumption at 11 watts. The front mounted display is listed as a 1.6" 240x240 212 pixels per inch with full color. Supported data rates are listed at the very bottom.

The MSRP of the Ubiquiti Amplifi HD comes in at $349.99 with a one-year warranty. For those on a stricter budget, you can get the standard model for $199.99 and the LR for $299.99 albeit with less performance.

Packaging for the Amplifi is quite nice. They put together an entire presentation as you unbox this unit; I always enjoy seeing the attention to detail. The front of the box has an image of all three devices. 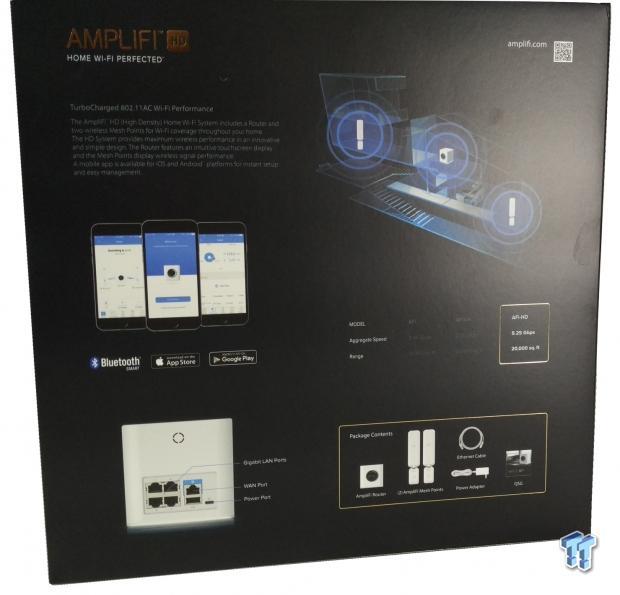 On the back side, we find model comparisons and a touch of marketing information. 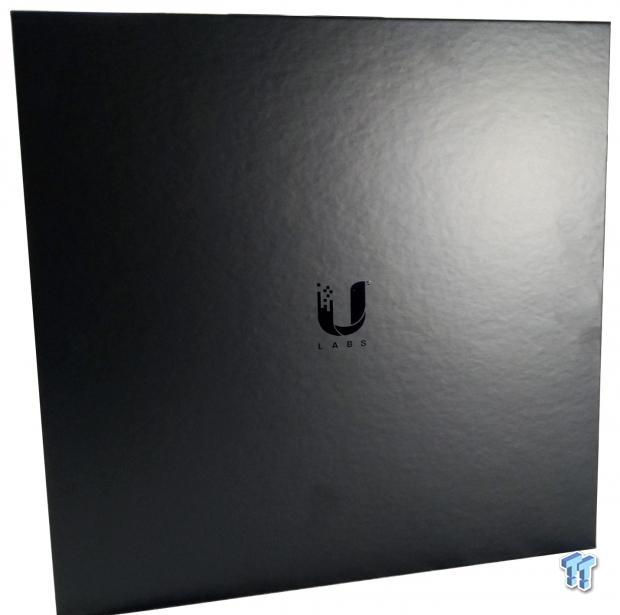 Pulling the sleeve off reveals the inner box, stamped with the Ubiquiti logo. 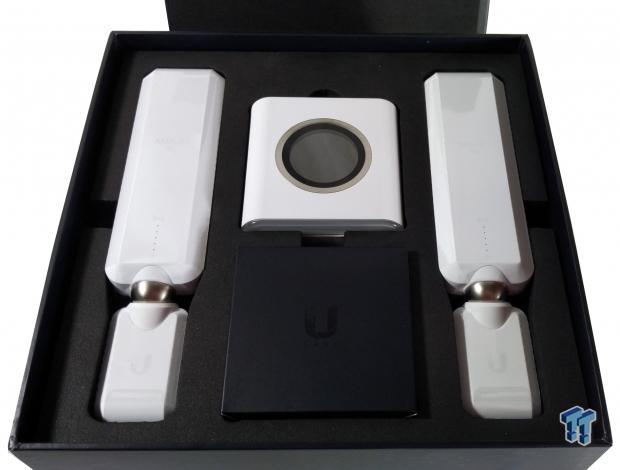 Opening the box, we have everything laid out in dense foam. To each side, we have the mesh points, the center housing the base, and below we have the cables. 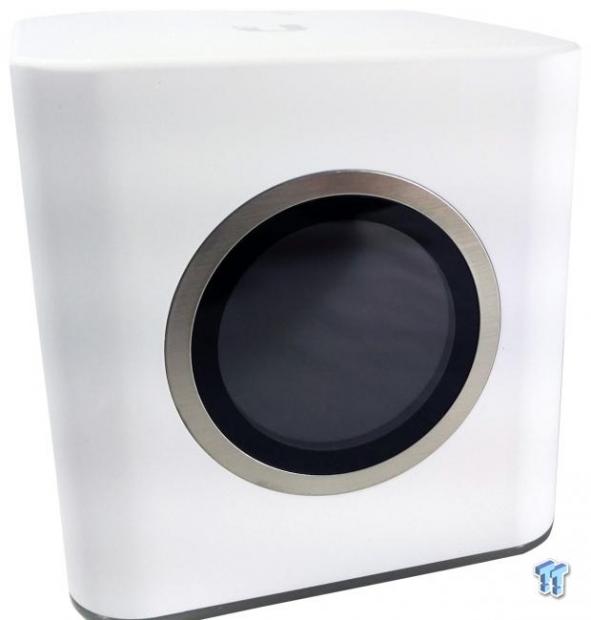 Getting right into things, we have the base station with its touchscreen. 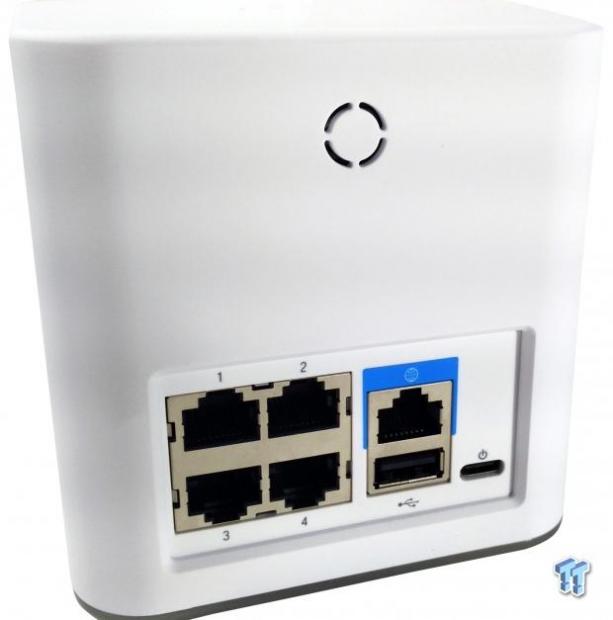 On the back the I/O connections have the four gigabit LAN ports grouped together and the WAN to the right and the power connection using what looks like USB-C. 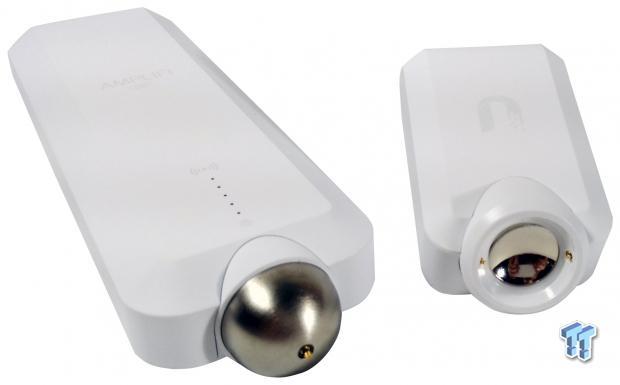 The mesh points use a lower half power inverter that magnetically attaches to the top. There are five LEDs on the front that indicate signal strength and can be rotated to adjust signal. 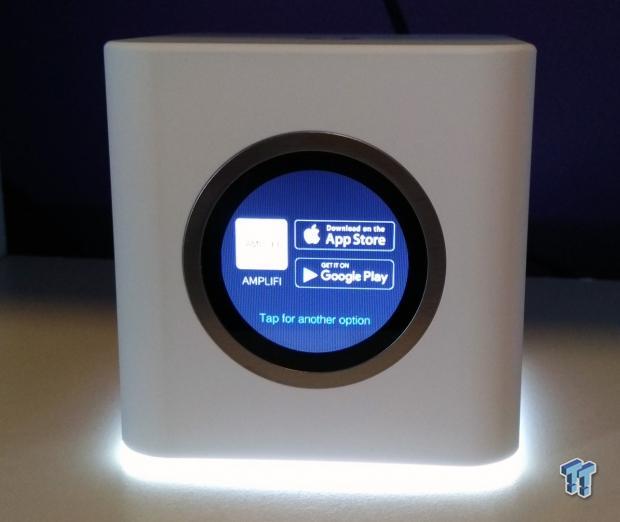 Above, I have set up the base and as you can see the screen is quite vibrant and the LED that fills the base of the unit adds to the aesthetic. 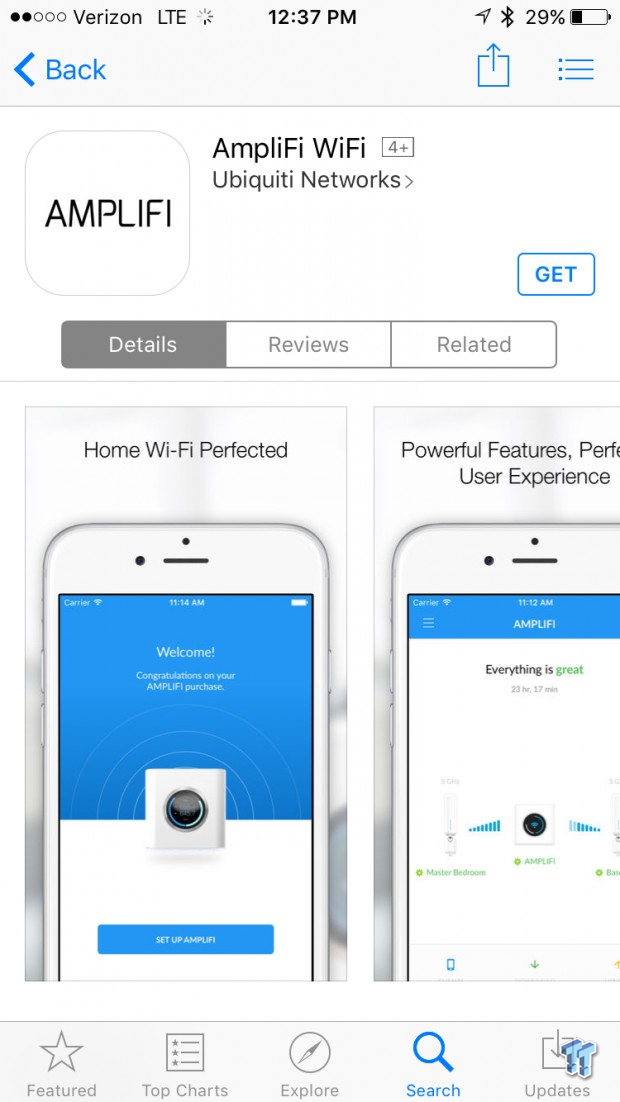 To control the functionality and to set up the Ubiquiti Amplifi HD, everything goes through this app. I grabbed it from the App Store on iOS, but it is available on Android as well. 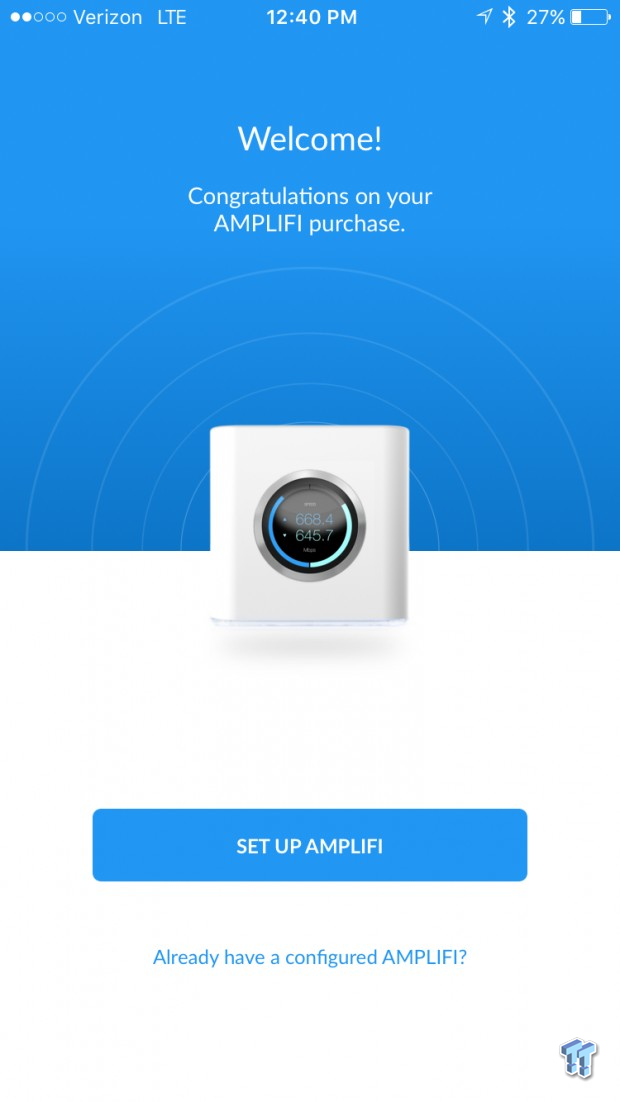 Diving right in, we begin setup of our first mesh network. 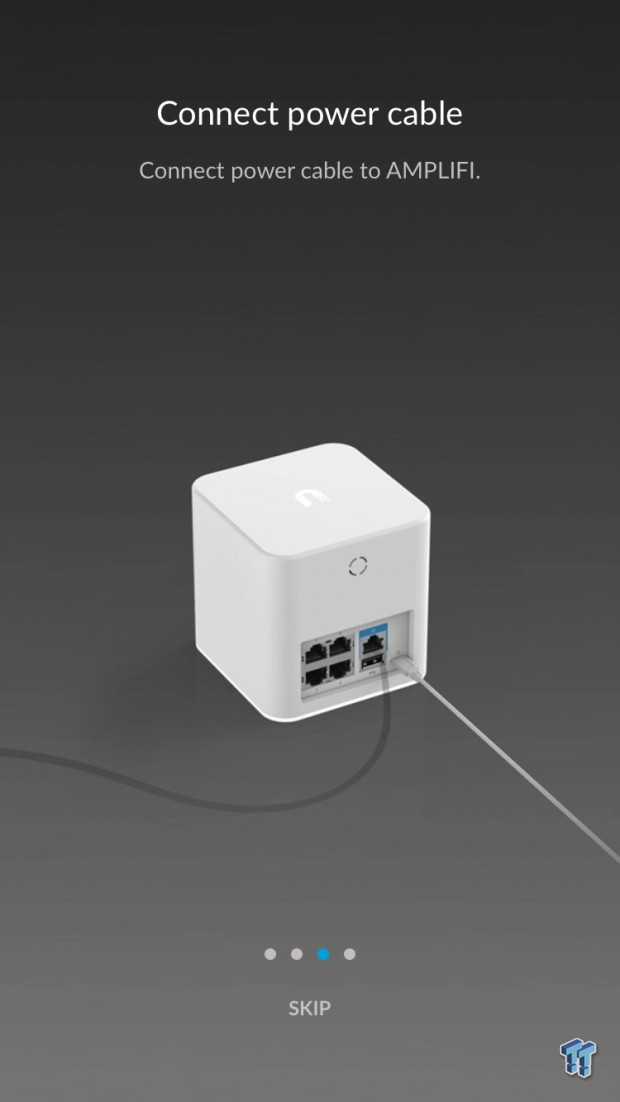 Following the steps including three previous to the one above, we have plugged in the Ethernet and WAN cables and now the power. 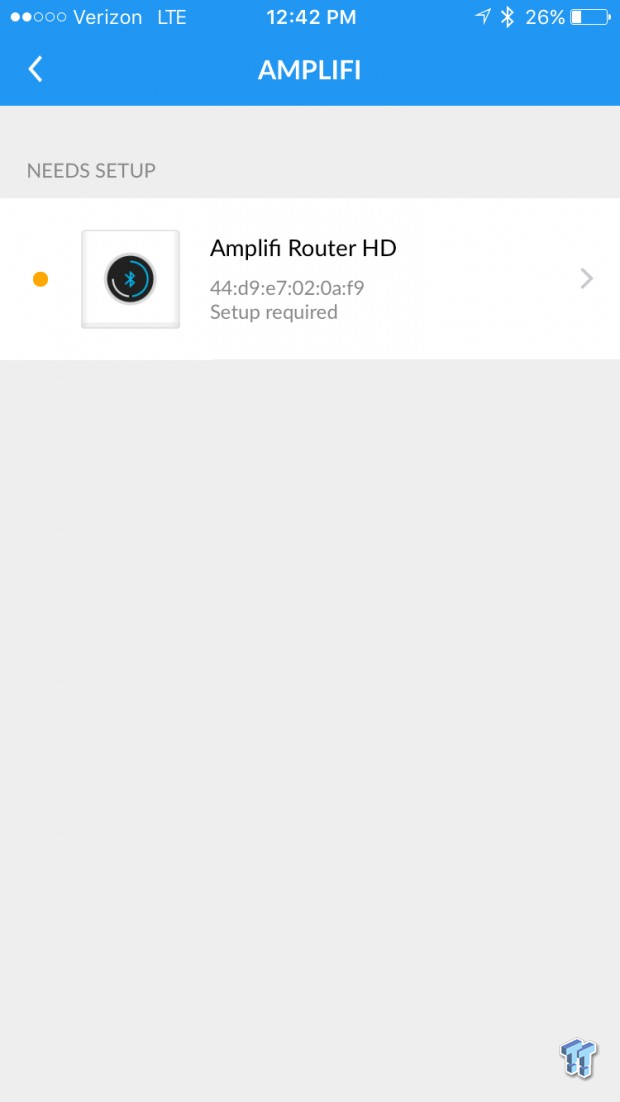 The first step is the app seeing your base so you can begin customization. 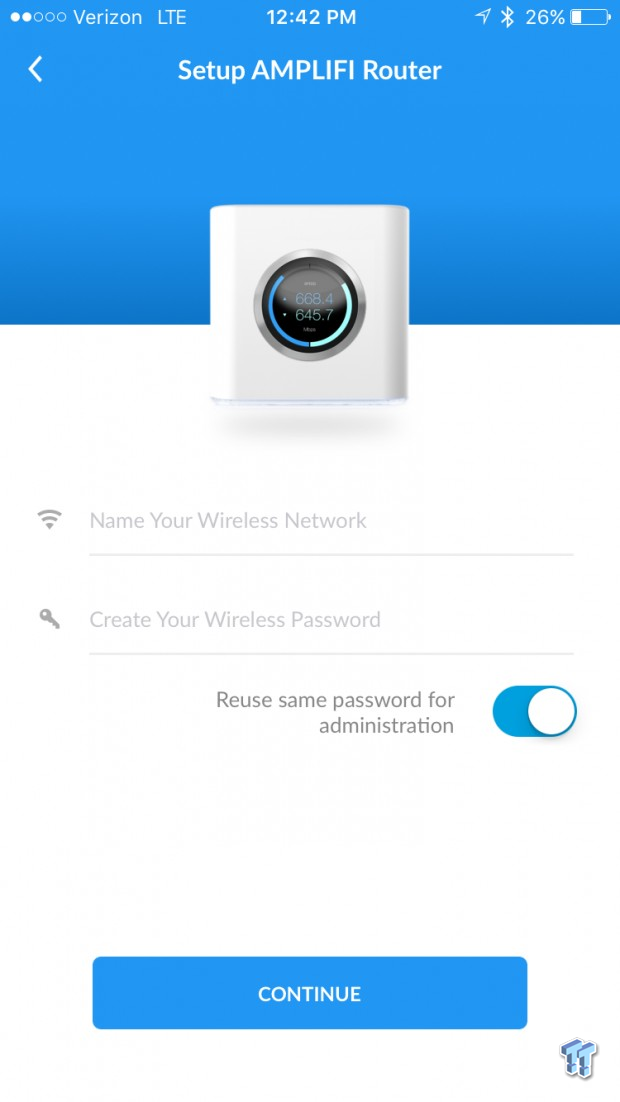 The first true step in the process is giving our network a name and password. 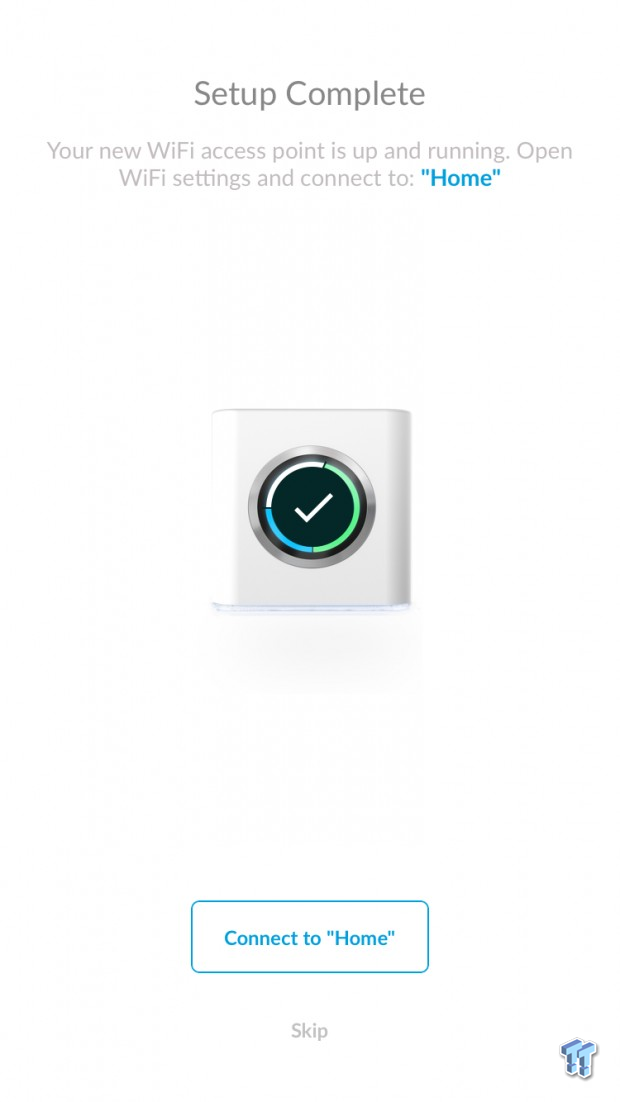 A few more steps and the setup is complete, and we can begin using our network. 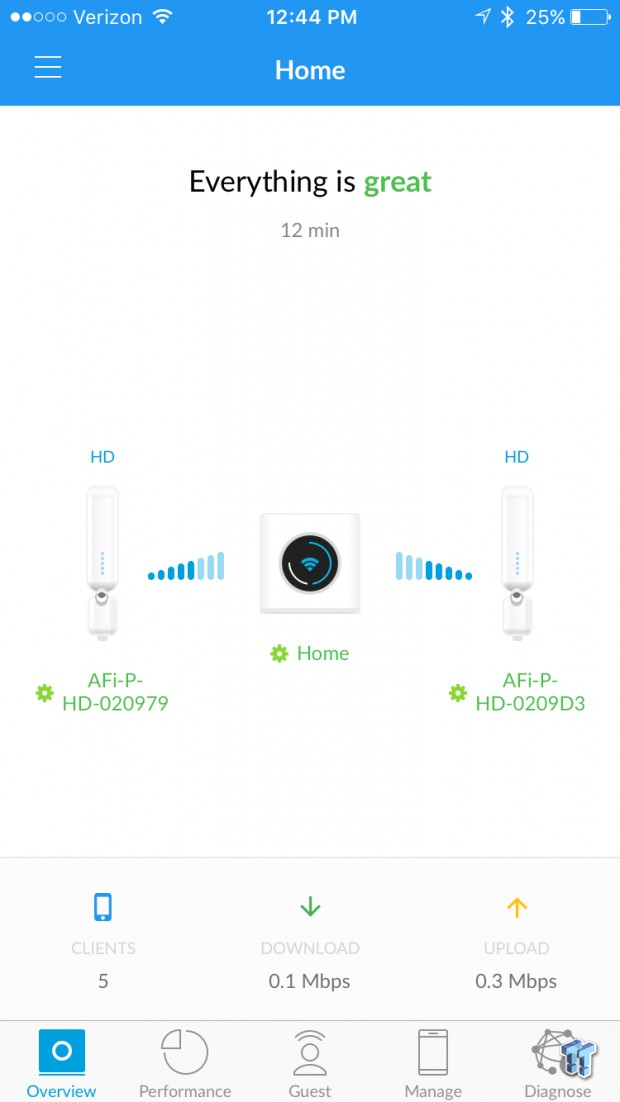 The dashboard interface has a pretty good layout. The bottom shows your connected clients and their performance, while the top gives a visual of the mesh points. 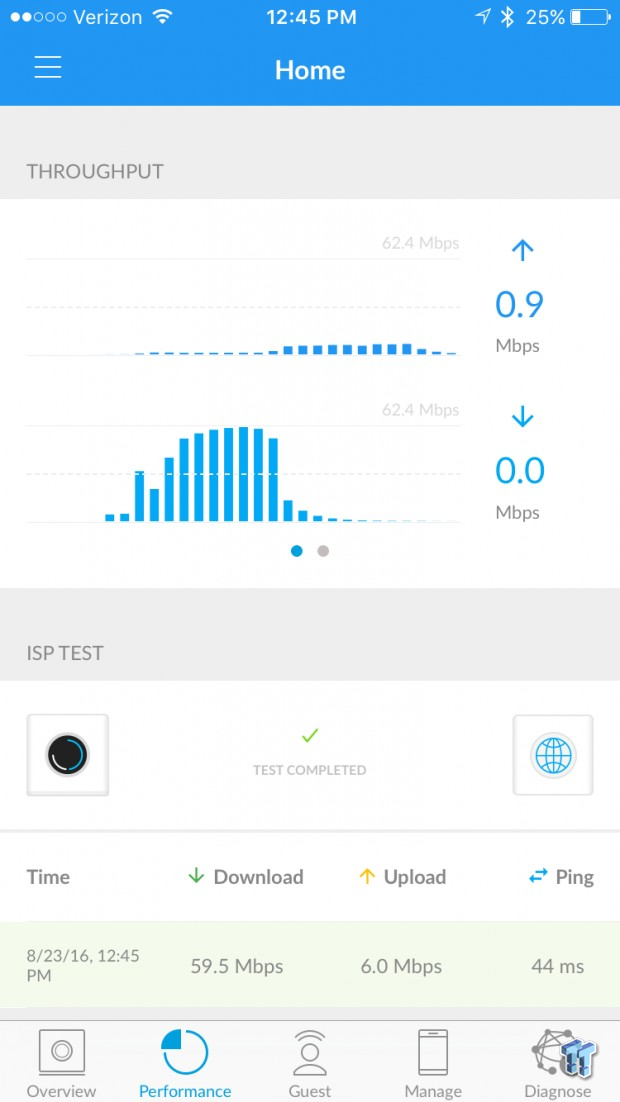 There is an ISP test if you flip over to the performance tab - I reached 60/6. 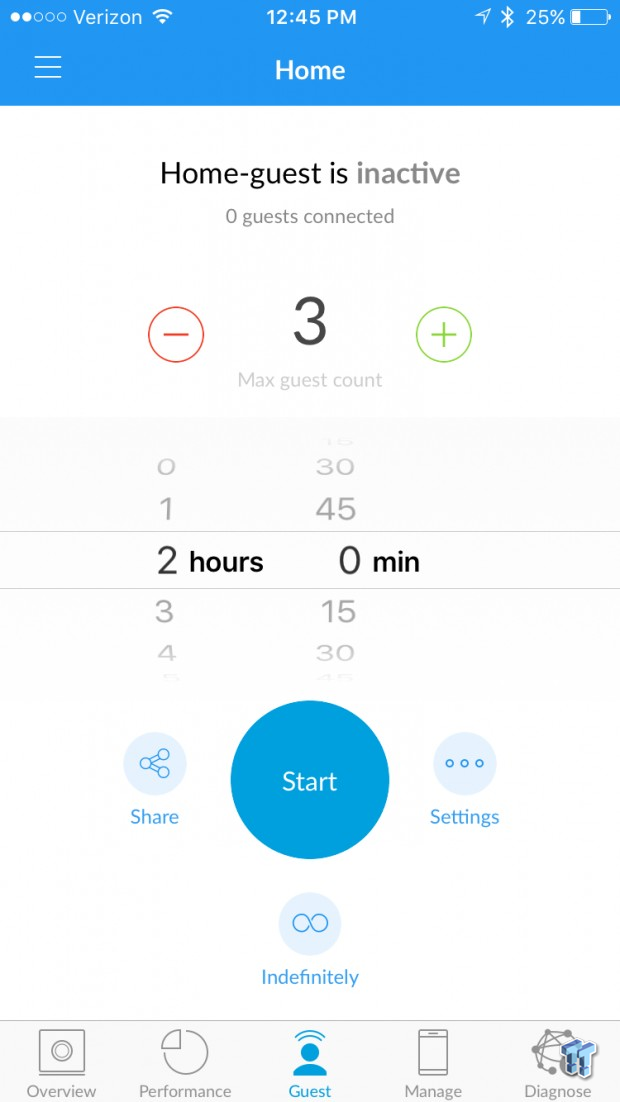 The next tab is the guest network, where you can adjust the settings to the right. 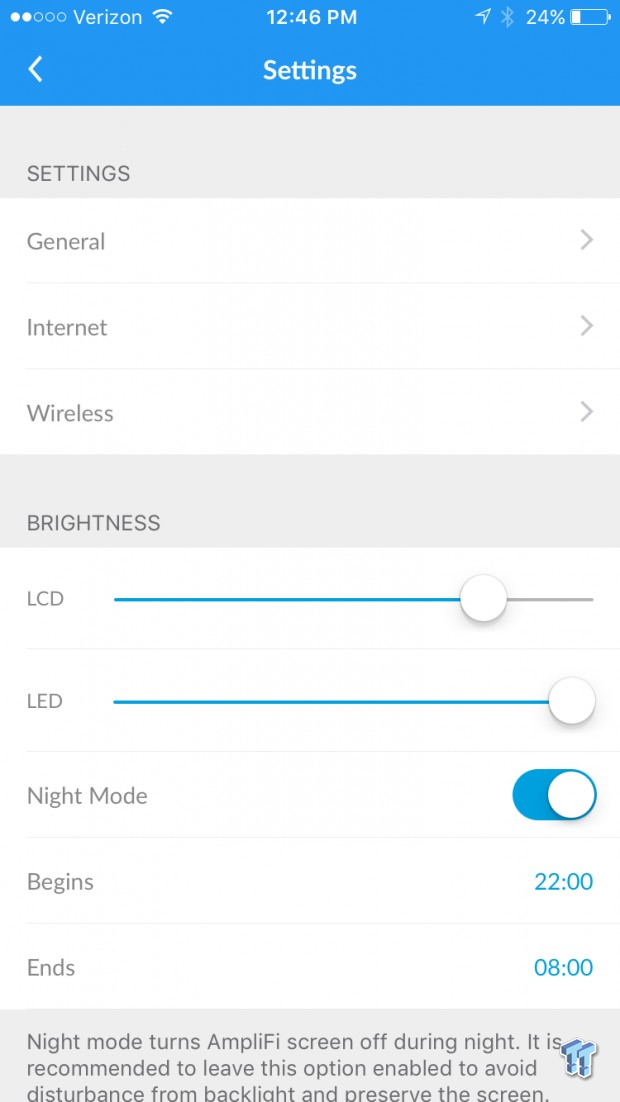 Moving to the management tab, we have settings for Internet and wireless along with the option below to adjust the LED and touchscreen brightness. 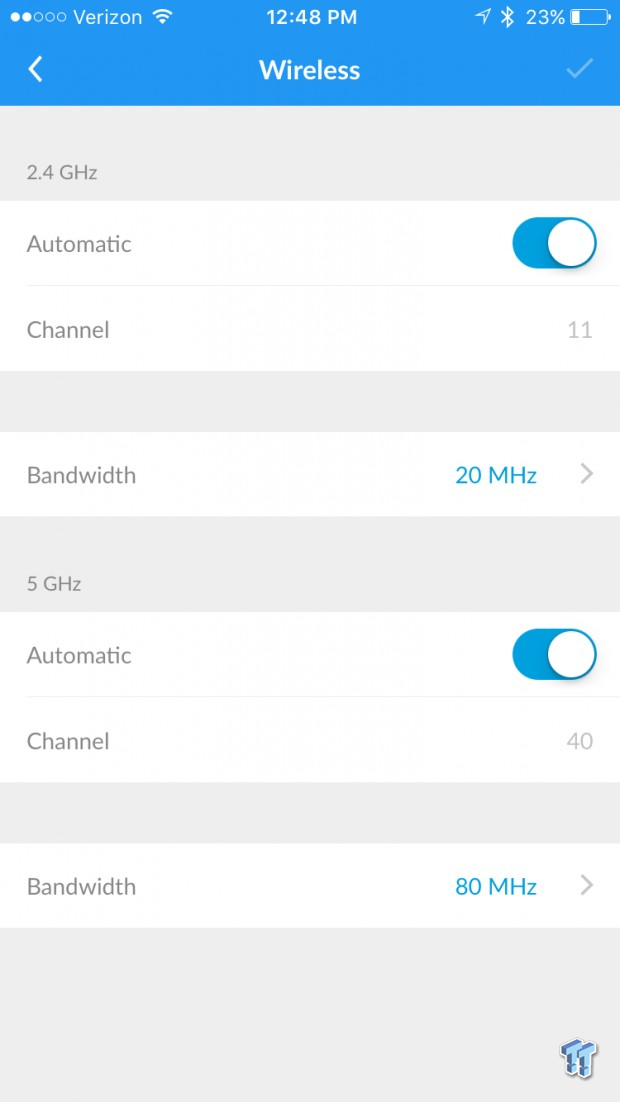 Wireless settings allow you to change the band and channel, while there is a deeper menu to dive further into settings. 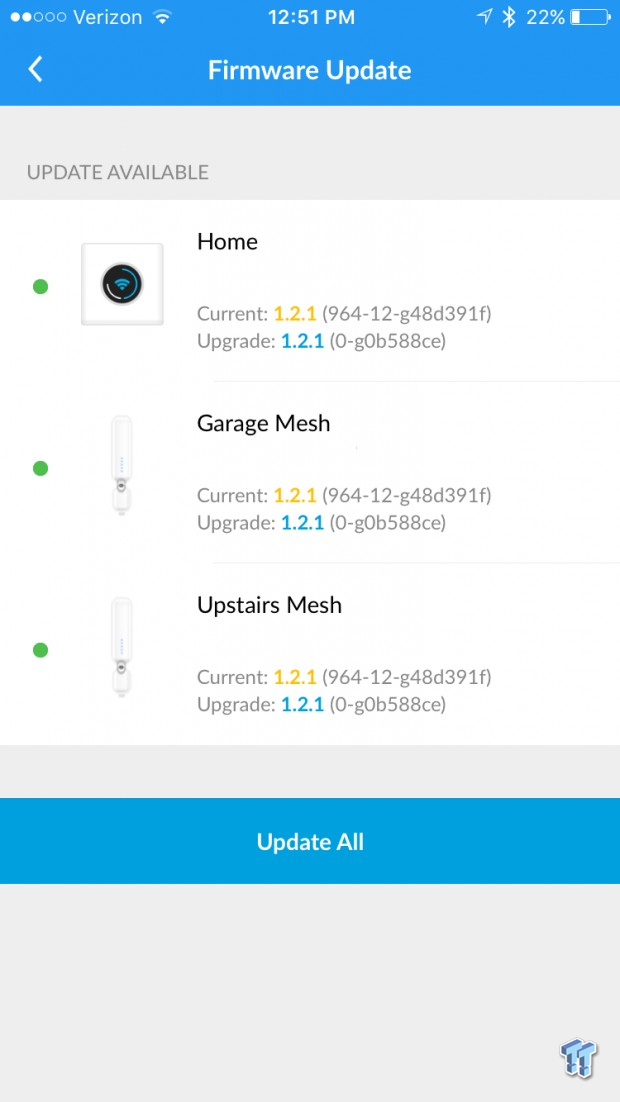 When I first set this system up, we had to do a quick firmware update. So testing was all done on the firmware seen in the blue lettering. 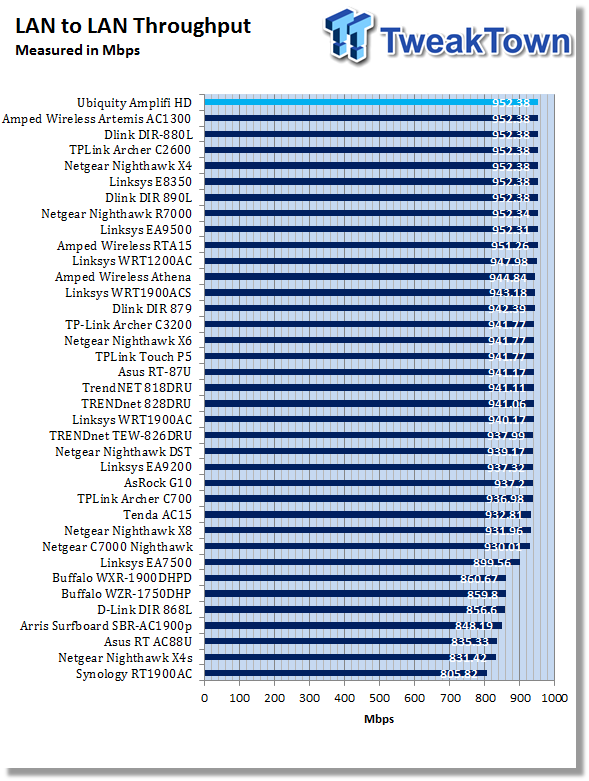 I had to reorganize the charts before this review, as they were becoming quite cluttered. They are now sorted from highest to lowest performing for each test and starting with LAN to LAN throughput; the Amplifi HD doesn't disappoint. 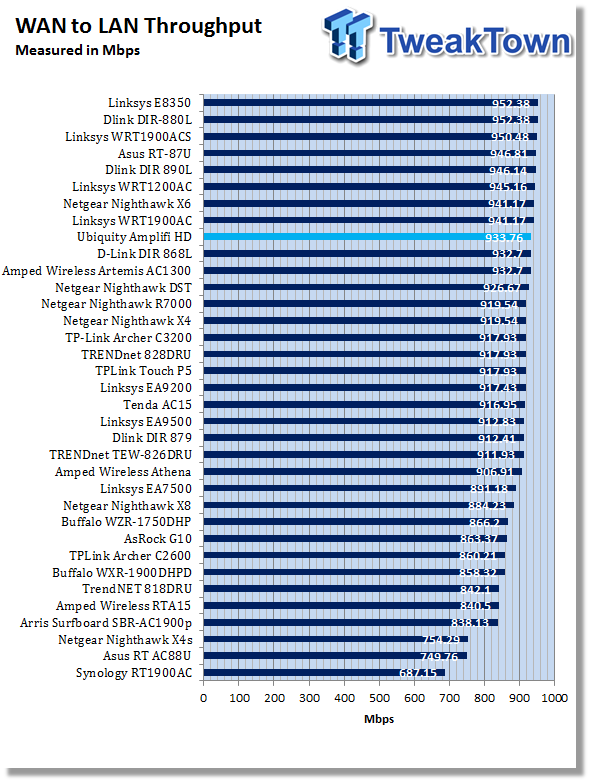 WAN throughput nudged the Amplifi down only slightly to 933 Mbps. 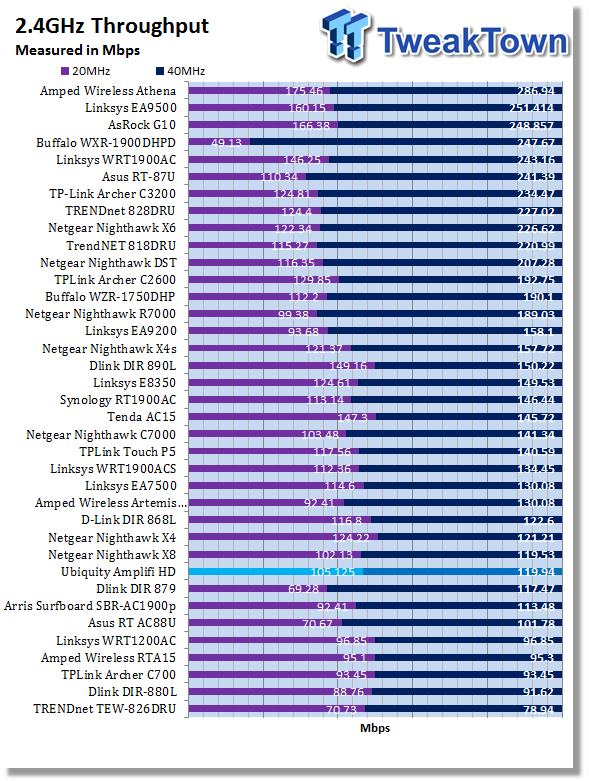 In 2.4GHz testing, the Amplifi landed towards the bottom, reaching just 119 Mbps at its peak. 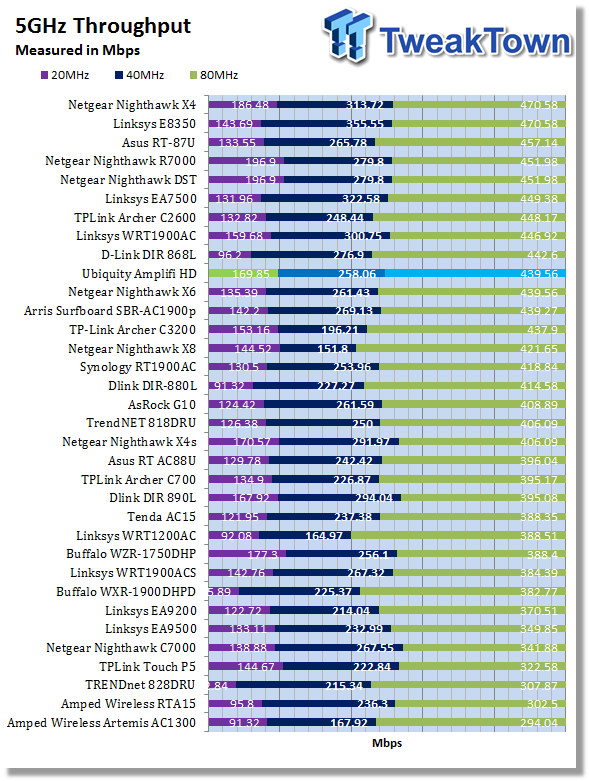 Moving on to 5GHz performance testing, the Amplifi HD was able to reach 439 Mbps, which is quite good, with 470 Mbps being the highest I have ever seen.

Over the last few months, I have been testing different solution that would give a visual on wireless router range. While this solution isn't perfect, it is one where you can compare for yourself if you have an Android device.

In this test, we are looking at the "Home" network, and I have left the Amplifi HD in its default setup. The first scan starting from the left is right in front of the base station, and we achieved 100% signal at -56dBm. Moving out to 15ft, we start to pick up one of the first mesh points as the signal stays at 100% at -48dBm, another 10ft out we are in between mesh points and the signal stays at 100% at -46dBm. The last two we are more than 50ft away from the base station and 10ft away from the nearest mesh point, still 100% at -56dBm and last in the garage, where Wi-Fi has never really been the greatest, 84% at -58dBm.

The Amplifi HD is platform number 38 that I have tested in the last three years. That's a one per month on average and as frustrating as it can be at times, I have always tested these routers in my own home network for at least a two-week period. This usually gives me an idea of the router's performance with multiple devices, how it handles streaming, and local network content.

The Amplifi HD arrived last Monday, so I have had a touch over a week to spend with it and in that time I have formulated a few opinions on the unit. First, the build quality is second to none; it started with the packaging and the presentation that goes with it making you feel special, that you really got a top tier product in your hands. They have continued that feeling into the device itself as it has that soft silicon feel to it similar to the Colossus chassis from Bit-Fenix years ago. The touchscreen is more responsive than I have ever seen on a router and it's interestingly enough one of the best features of the base station - with a touch of your finger, you can check your monthly data usage, how many devices are connected, and current throughput.

Second, the performance of this platform is simply amazing. And I'm not really talking about pure numbers here, it's more about what you feel when you use your smartphone around the house or have your laptop out on the deck or patio, you feel connected. I was able to achieve top performance via LAN at 952 Mbps, while WAN dropped slightly to 933 Mbps. Wireless performance was in the middle for 2.4GHz at 119 Mbps and near to top third for 5GHz at 439 Mbps peak. The range tests show the true performance of a mesh network as I was able to keep a 100% connection through most of my testing.

In closing, I must say mesh is the future; it's what we have been waiting for, but no company has been able to provide it on a consumer level. As you may have noticed with recent announcements, all the major vendors are jumping on this bandwagon - and, if they don't, they are irrelevant, because the traditional router setup is almost dead.

The Bottom Line: Throw away your legacy routers. Mesh is everything you have always wanted and the Amplifi HD has nailed it down perfectly.