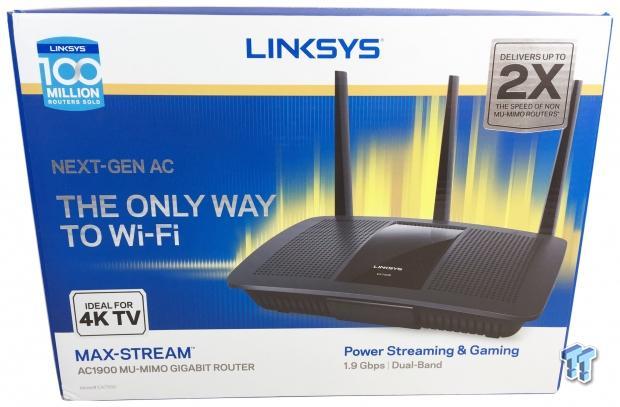 Nearly a year ago Linksys launched its first MU-MIMO solution into the market, the EA8500. I didn't have a chance to test that particular solution at the time but today we have a router in house that shares quite a few bits and pieces with that solution, especially on the hardware side.

The EA7500 is Linksys' expanding their portfolio into the MU-MIMO AC1900 market. Using the same Qualcomm EFX platform they have come up with a solution that while based on the same Smart Wi-Fi firmware platform can produce 1300 Mbps on the 5GHz band and 600 Mbps on the 2.4GHz band. Additional features include four gigabit LAN ports along with a WAN port adding to storage ports equaling USB 3.0 and USB 2.0. 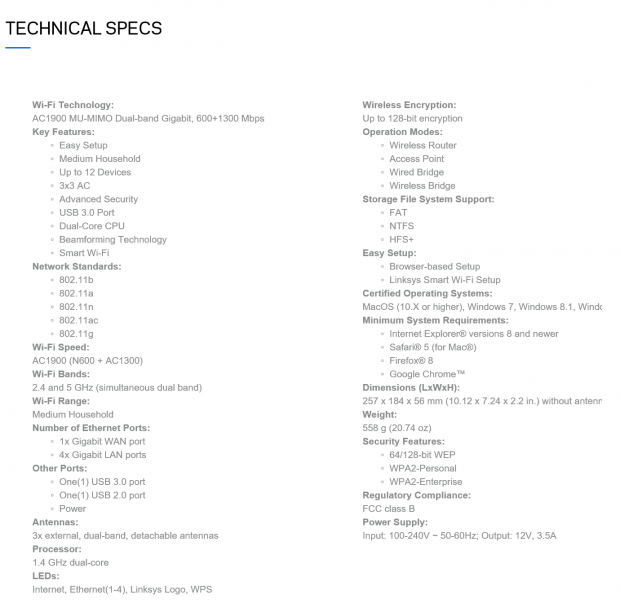 A deeper look at the specifications shows Linksys is aiming this solution at medium households with around 12 devices. Also listed is MU-MIMO and Beamforming support along with its dual-core CPU, which in this case is the Qualcomm IPQ8064. Paired with the 8064 is 128MB of DDR3 and 128MB of NAND.

The radios use a 3x3 configuration and are supplied by Qualcomm as well with model numbers QCA9982 and QCA9983, the switch used is a QCA8337. Filesystem support for the USB 3.0 storage option includes FAT, NTFS, and HFS+ and it is Wi-Fi Certified.

MSRP of the Linksys Wireless Router is set at $199.99 and features a one-year warranty.

The product packaging is quite colorful with the EA7500. The right side has an image of the router while the left side includes marketing information. 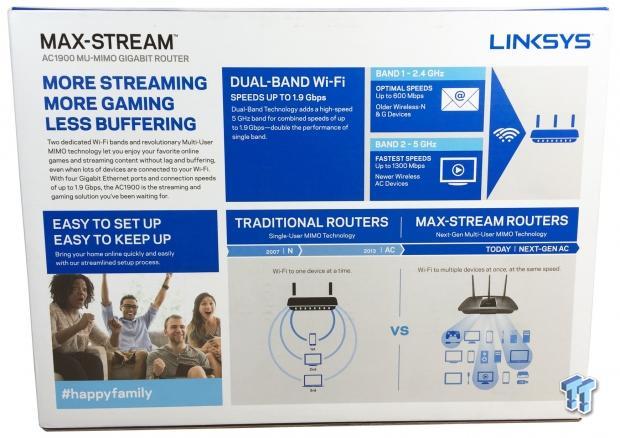 The backside of the box houses a quick comparison chart of traditional and MAX-STREAM routers along with additional marketing information at the top left. 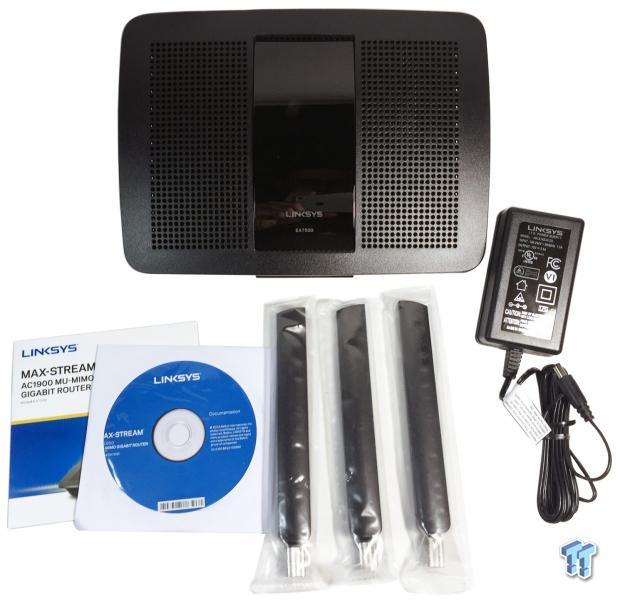 The scope of delivery includes documentation, wireless antenna, and the power adapter. 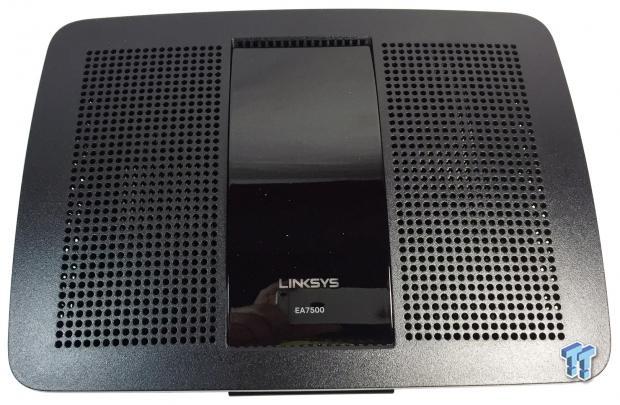 The top of the router uses a vented design with the center solid and glossy. The Linksys logo here has a white LED that blinks when there is an issue with the router.

The backside houses all of the connectivity. Left to right, we have the USB 3.0 and 2.0 ports next to the reset and WAN port. Right of the center SMA connector we have the four gigabit LAN ports and the power input and switch. 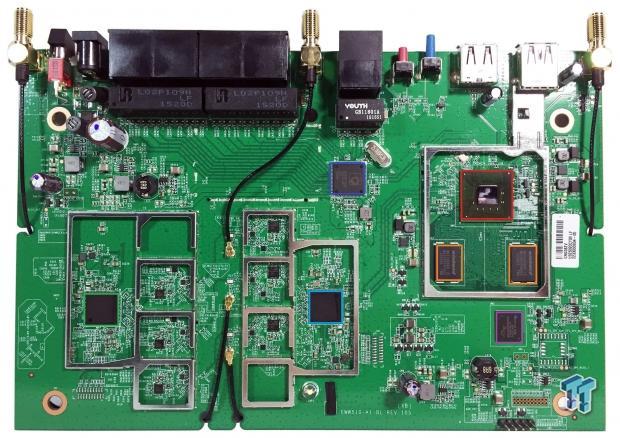 The PCB for the EA7500 is quite busy. The top right houses the main CPU and RAM while below is the 128MB of NAND from Spansion. To the left, we have both radios and the switch between the two. 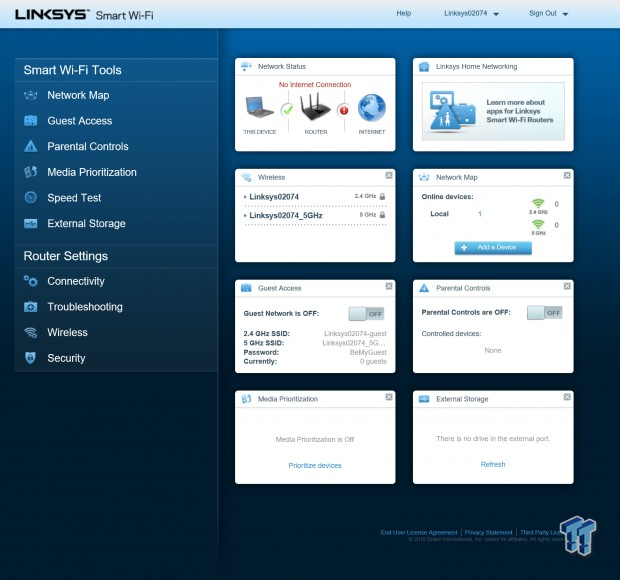 Since moving to 802.11ac, Linksys has gone with the Smart Wi-Fi platform with most of their product releases. With that, this platform has become quite solid with little to no bugs. On the main menu, you can see a quick look at the router to the right. 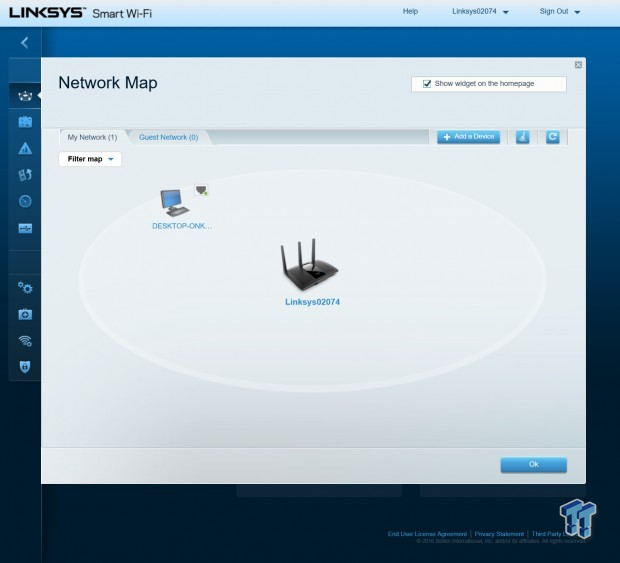 The network map will give you an idea of what PCs or devices are on your network. 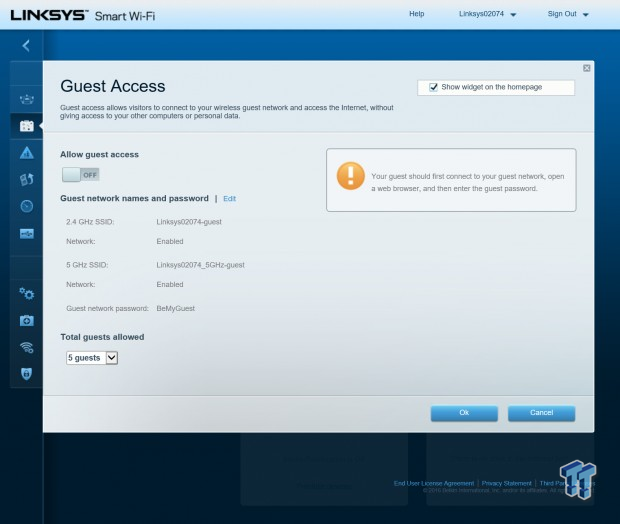 For those of you that use guest access, the EA7500 doesn't disappoint. 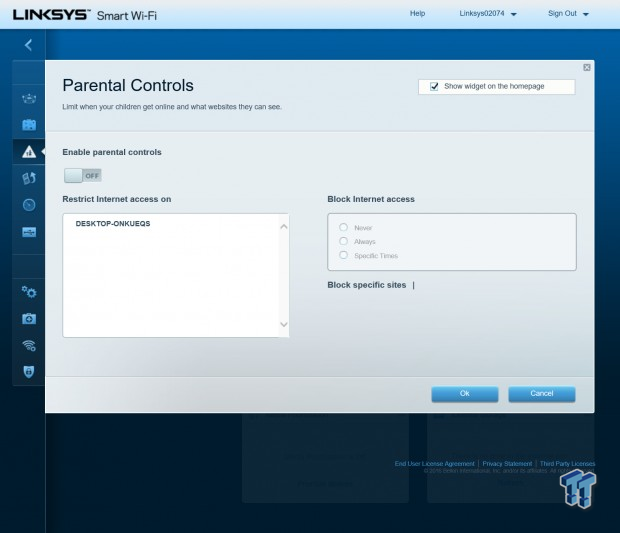 Parents, you too will be happy as the EA7500 will allow you to control when your child uses the internet. 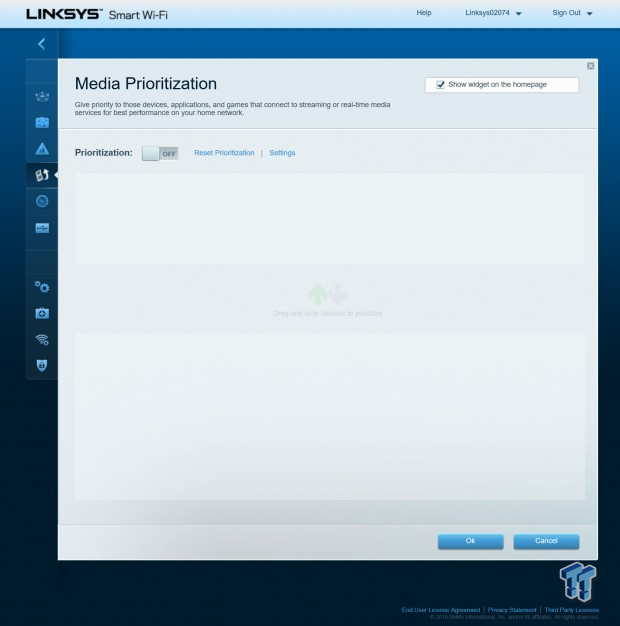 Like most solutions, the EA7500 has QoS or media prioritization as Linksys calls it. 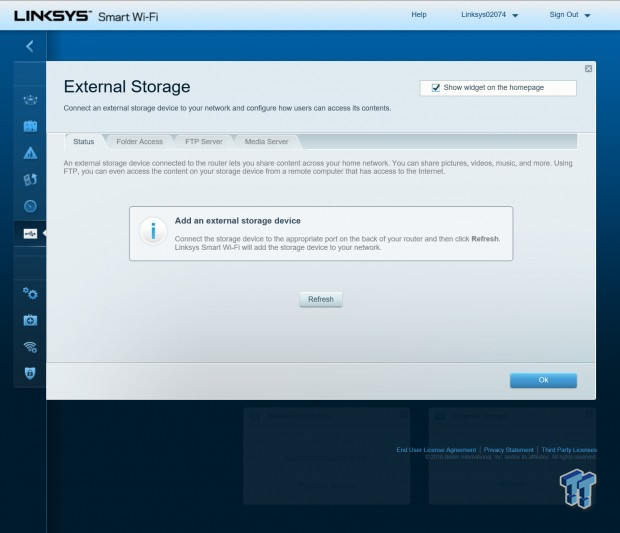 External storage is available via the USB ports and can be used to stream media or share files locally and through FTP. 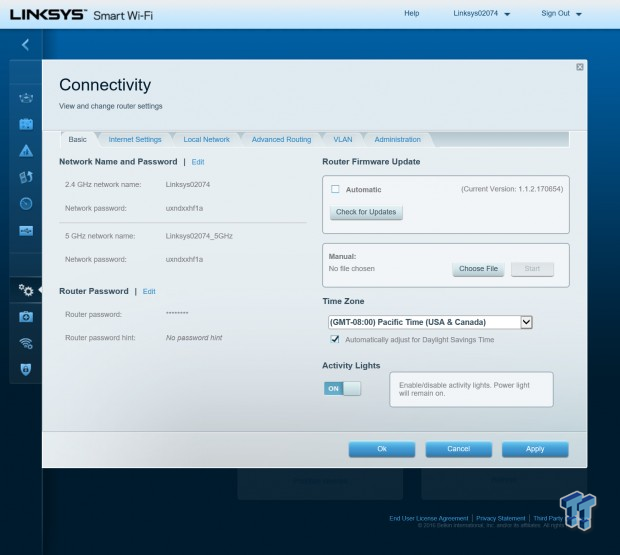 The connectivity menu shows you your current wireless setup on the left with router firmware information to the right. As you can see, I was using version 1.1.2.170654 for testing. 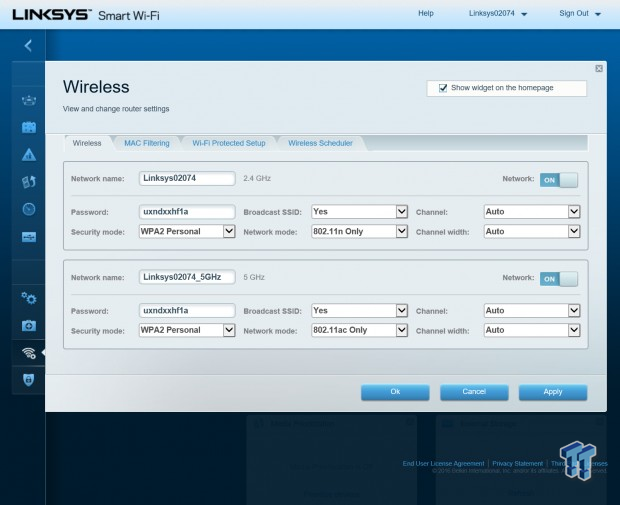 Without going too far into geek land, the EA7500 does allow you to configure the router to your liking whether you are a home user or enthusiast. 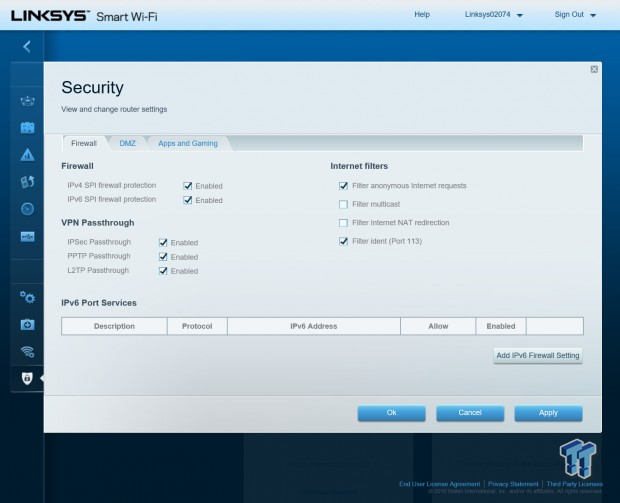 Last but not least, the security menu allows you to configure options such as firewall, VPN, and internet filters. A second and third tab enable DMZ and port forward functionality. 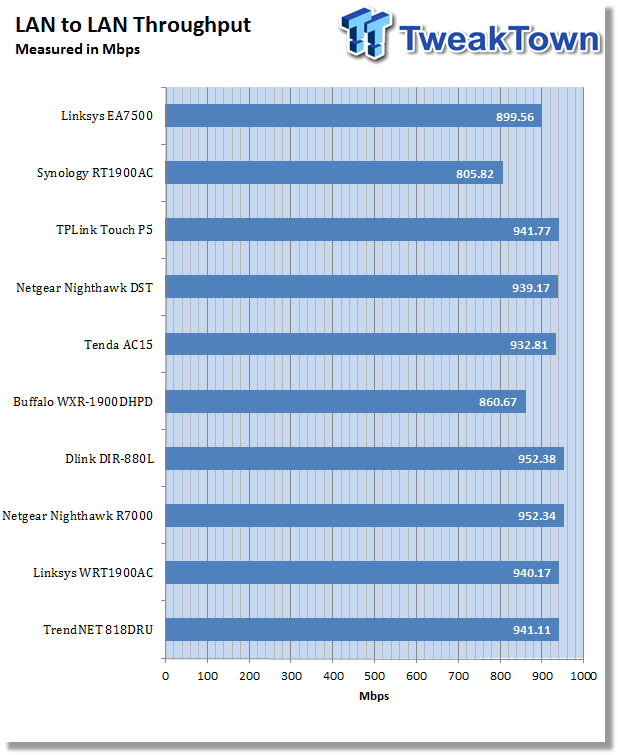 To begin testing, we set up the router for LAN throughput. The EA7500 was able to bring in an 899 Mbps average over its first and fourth ports. 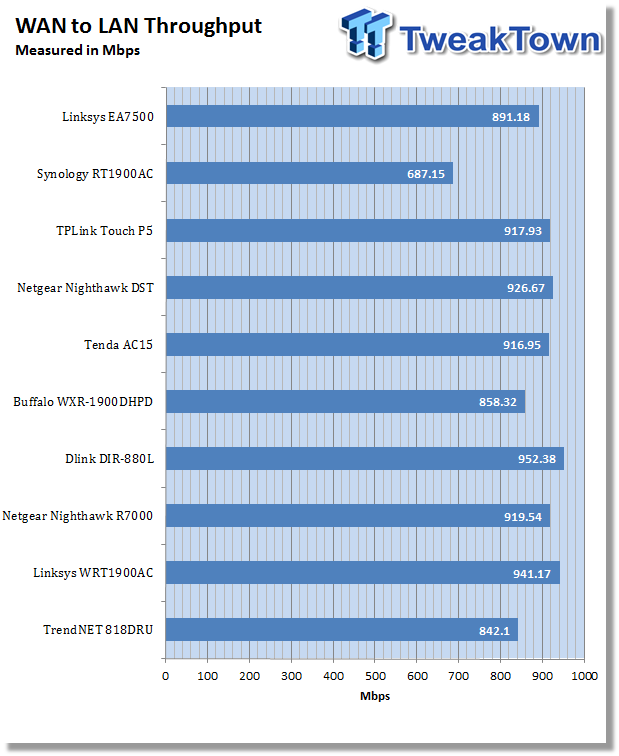 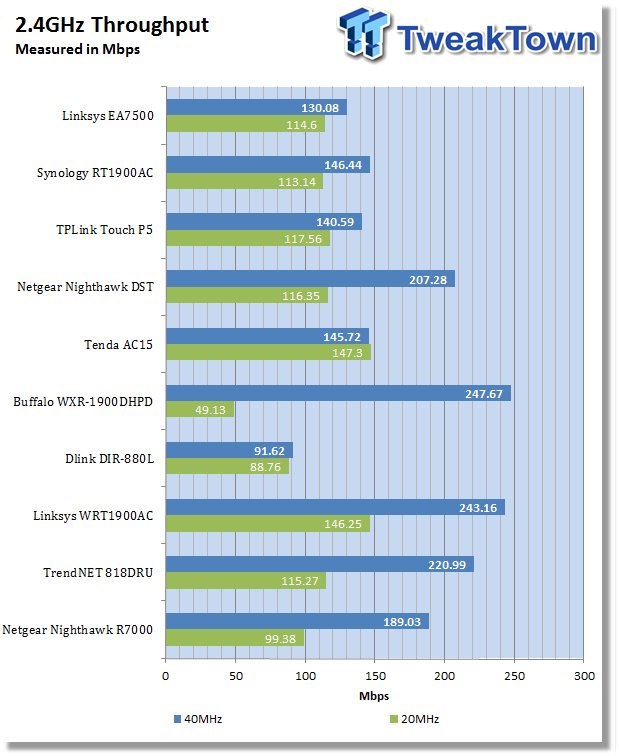 Switching to wireless throughput, I was able to get 114 Mbps out of the EA7500 on the 20MHz band and 130 Mbps leaving the device on Auto. 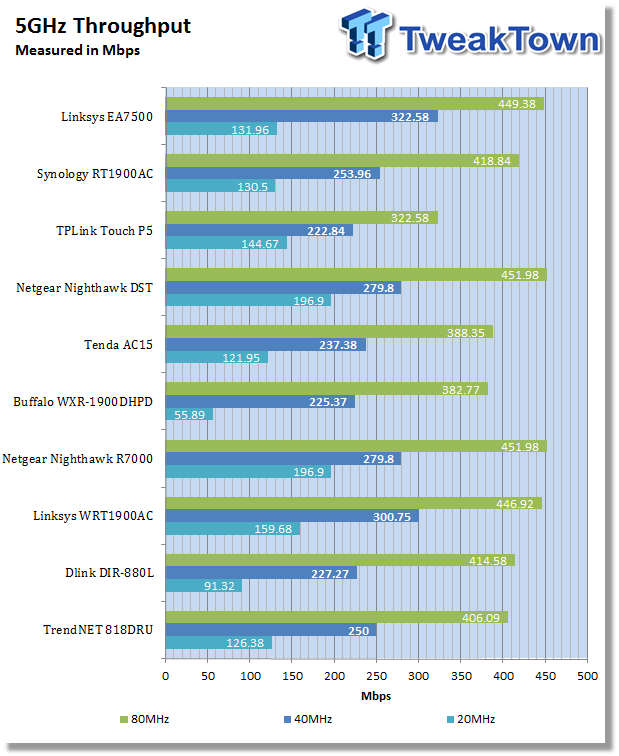 I honestly haven't seen this level of 5GHz performance since the original Nighthawk and before that the WRT1900AC. 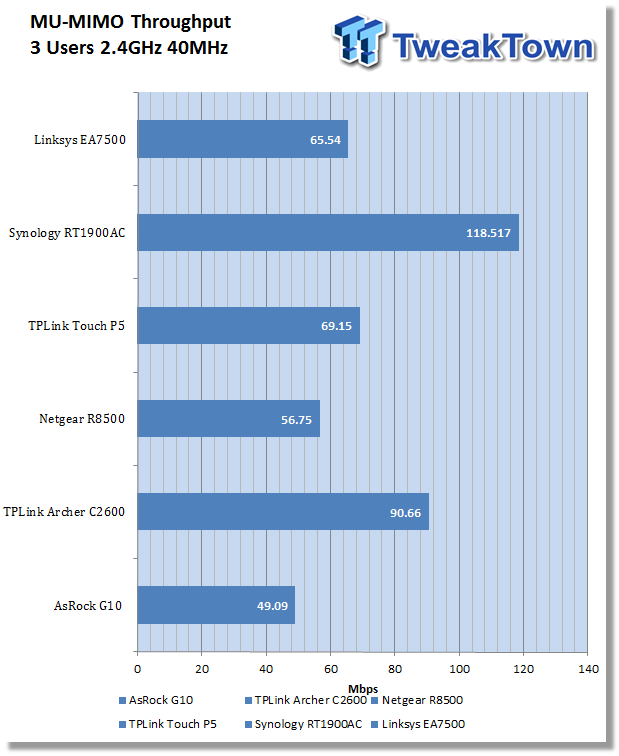 Multiple-user performance for the EA7500 on the 2.4GHz band was able to reach 65 Mbps. Not surprisingly these results may be low because this router only supports two devices on MU-MIMO and we test with three. 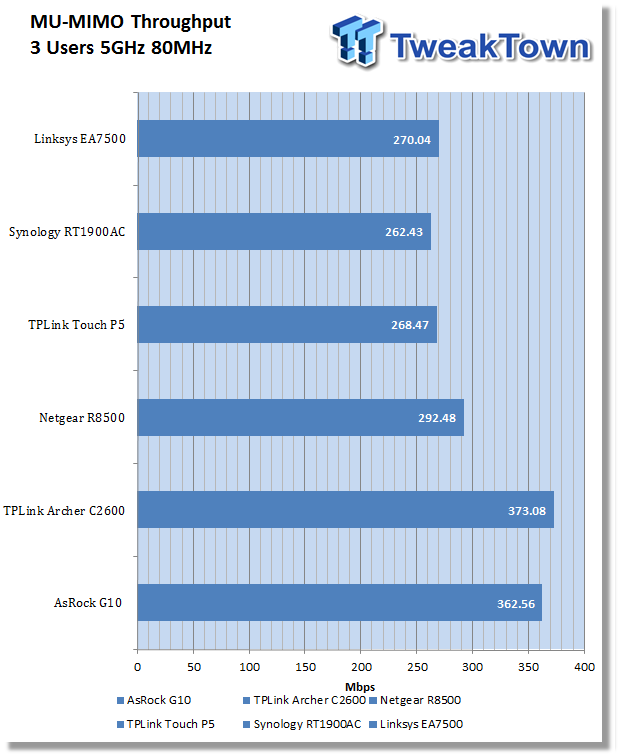 Looking at the 5GHz performance, we found the EA7500 to reach 270 Mbps on our test devices. 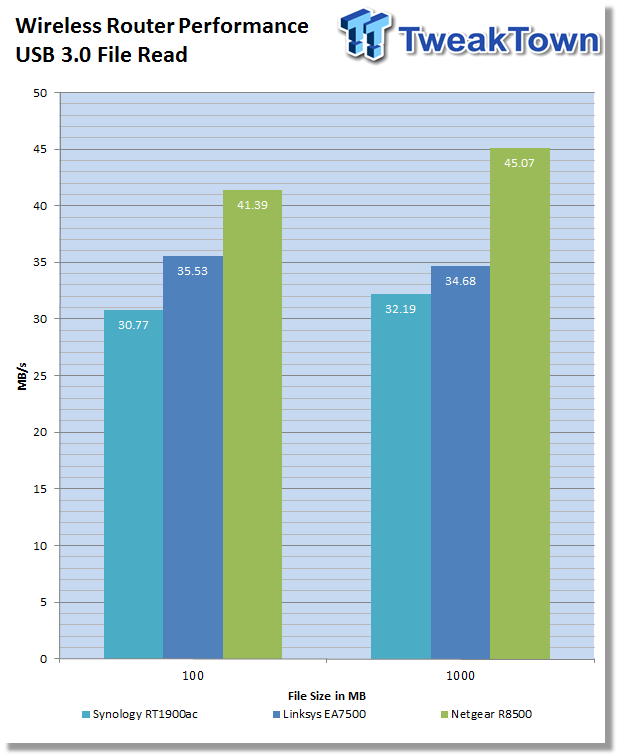 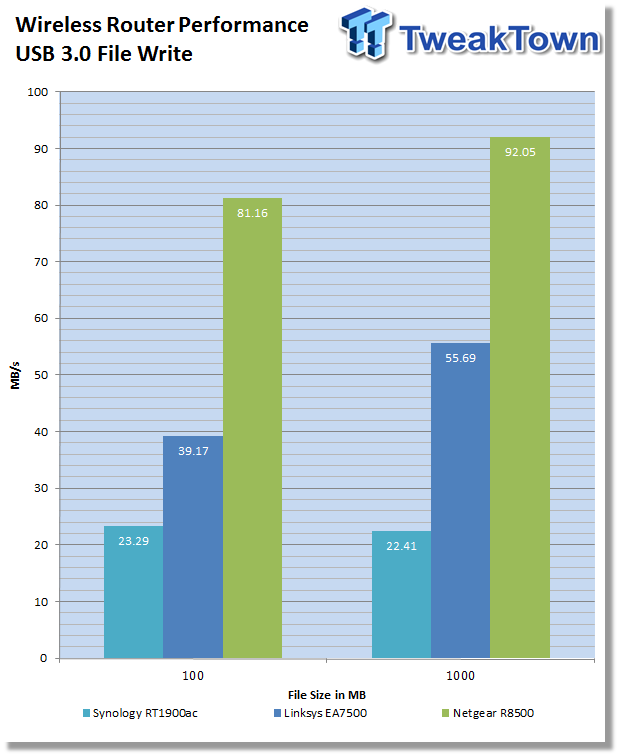 With the EA7500 not supporting the EXT4 filesystem we changed things up and went with NTFS. While not really comparable to previous solutions, the EA7500 reached 35 MB/s with the 100MB file size and 34 MB/s with the 1GB file. Write performance wasn't too much better at 39 MB/s and 55 MB/s, respectively.

There were many times in testing the EA7500 where I was surprised at the performance and others where I stopped and started over to verify my results. Before I go too far into the performance, I do want to say that I was quite happy with the build quality of the EA7500. The enclosure is suitable for its needs; it's really the same platform Linksys has used on many 802.11ac solutions in the past. When I opened the router up, I was surprised to see the main IPQ8064 had such a small heat sink, but then again, this router doesn't get very warm.

Performance for me was a bit off. I was surprised to see the router do so well when testing the 5GHz band, but then it seemed to fall short in comparison with LAN and WAN performance. As far as MU-MIMO is concerned, the router did what it was designed to do reaching in the mid 200's for performance, and as no one really has any capable MU-MIMO devices at this stage, so it's not really a big deal either way.

Storage performance of the EA7500 was low, but I have only seen one router in my three years of doing this perform anywhere near peak gigabit speeds. On the firmware front, I rather enjoy the Smart Wi-Fi menu as I have grown used to it in using my WRT1900AC for so long. Of course, other vendors have more features baked in, but I think Linksys was smart not to do overdo it with their OS.

Looking at the market analysis for the EA7500, Linksys may have a gem with the EA7500. As we look at the big three above, the EA7500 does have some solid hardware specs when compared to the other along with sharing a solid price point. On the downside, the warranty is only a year where with TRENDnet you could save some money and get a three-year warranty but sacrifice some performance.

The Bottom Line: At this price point, there really aren't many products available that offer more performance or features for your dollar than the Linksys MAX-STREAM EA7500 AC1900 MU-MIMO wireless router.