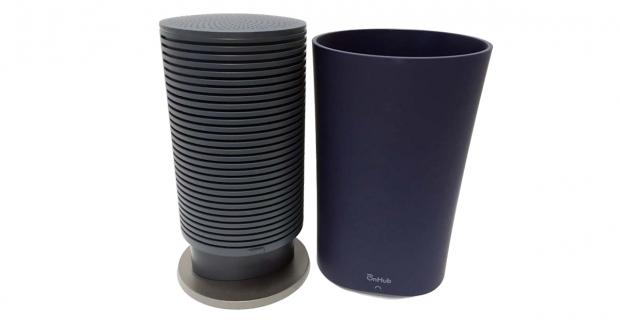 Over the past few years, we have gone through an intense amount of routers here on TweakTown. Solutions ranging from our first look at 802.11ac with the RTA15 from Amped Wireless to some memorable solutions like the Nighthawk X6 and D-Link 890L that went outside the box regarding design. Taking this a little bit further, the Google OnHub is set to simplify wireless networking on both the hardware side and aesthetics.

If you were just to take a quick glance at the OnHub, you wouldn't think this small cylinder is a wireless router, in fact, it carries a resemblance to a small office trash can. On the hardware side of things, this router is honestly no different than many solutions we have tested, apart from one critical area that we will get to later on. With that said this solution is a 3x3 platform giving dual band capabilities of 600 Mbps on the 2.4GHz band and 1300 Mbps on the 5GHz band. Additionally, the OnHub hides a few secrets inside which include a Bluetooth radio and a ZigBee SoC. 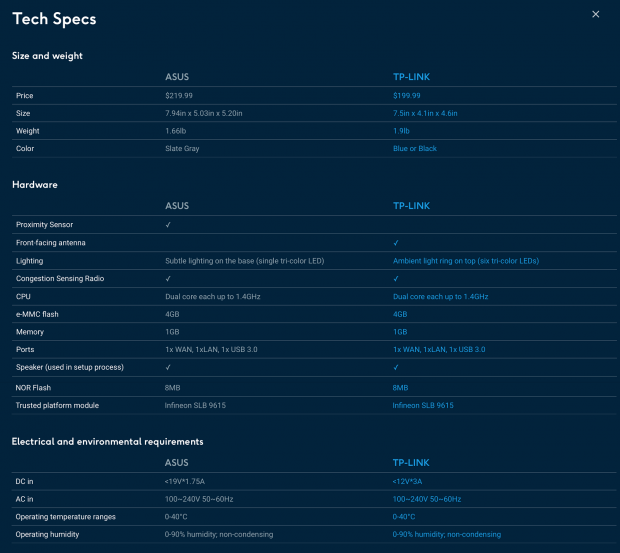 Specifications for the OnHub include from the top down a small footprint at 7.5 x 4.1 x 4.6 inches. Keeping in mind, we are looking at the TP-Link designed solution this router does not have the proximity sensor and instead opts for the front facing antenna. An ambient light ring runs around the top of this router, and when we dive right into the hardware side of this router, we have at its heart a dual-core SoC operating at 1.4GHz next to 1GB of DDR3 and 4GB of onboard eMMC flash. 8MB of NOR flash is also present on this router and while this router is clearly a unique solution it also comes in with just a single Gigabit WAN and LAN port.

The Google OnHub by TP-Link carries an MSRP of $199.99 with a two-year warranty. 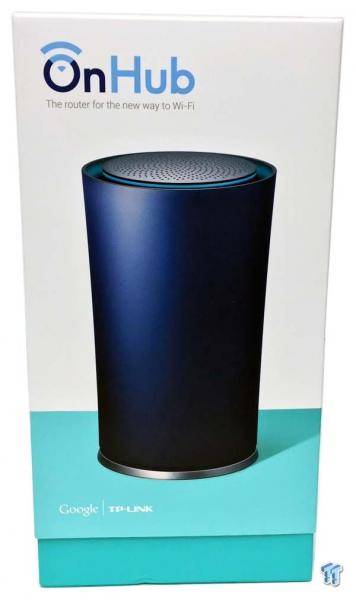 Packaging for the OnHub is rather sleek and simple. On the front of the box, we have an image of the router with very little branding apart from the OnHub logo at the top left. 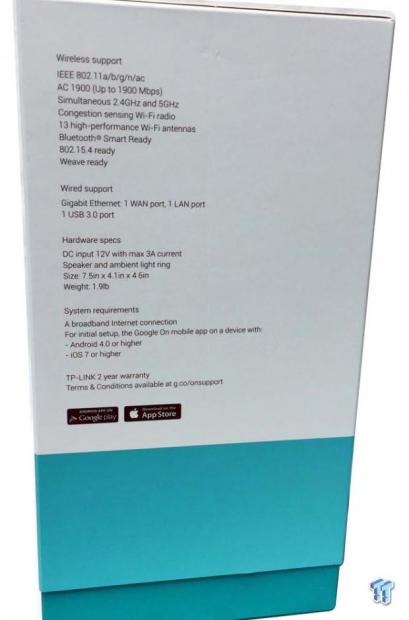 Specifications for the router are listed on the side of the box. 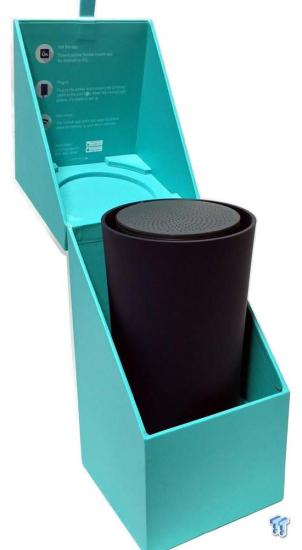 Above, we have a look at the OnHub stepping back to get a full view of the packaging too. 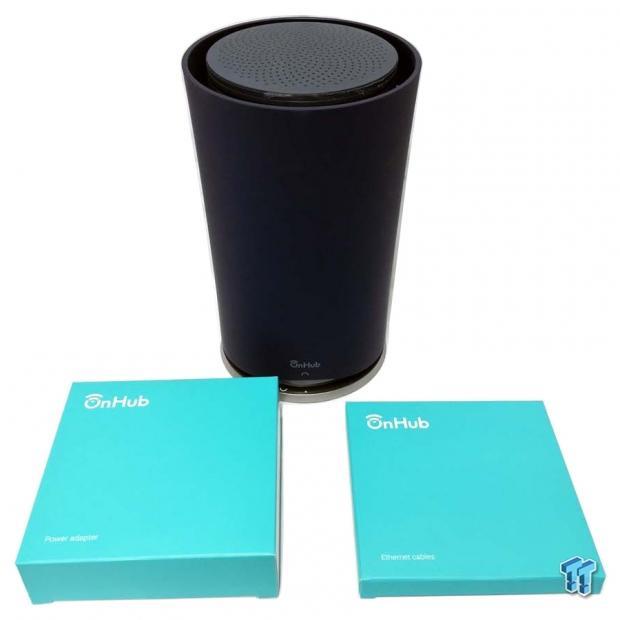 The scope of delivery is quite simple. We have the router along with two boxes one with the power adapter and the other having the Ethernet cables. 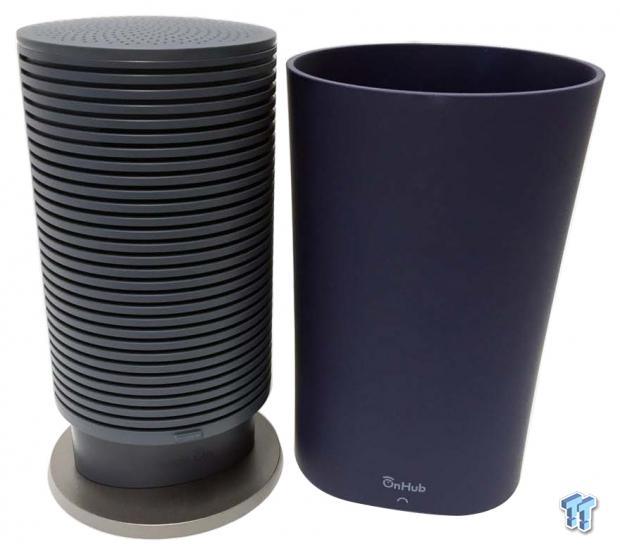 Removing the external housing from the router, we have a gray internal structure. 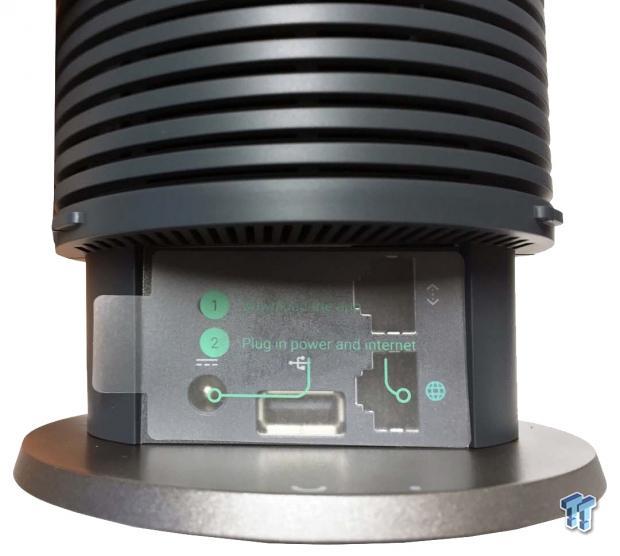 Above, we have a look the I/O of the router and as you can see its quite simple with just a USB 3.0 port and two Gigabit ports being present. 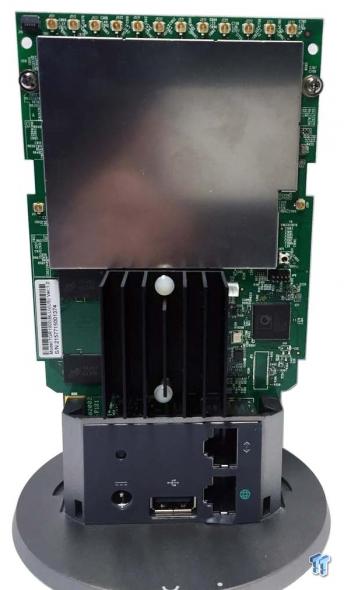 Diving in slightly deeper than we normally do, I managed to get the OnHub tore down without destroying it. As you can from the image above, we have the wireless radios here towards the top with the full array of 12 inputs across the top. In the center, we have the dual-core SoC. 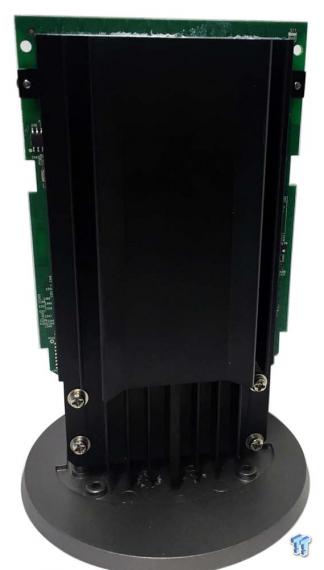 On the opposite side, we have a heat sink covering the entire side. 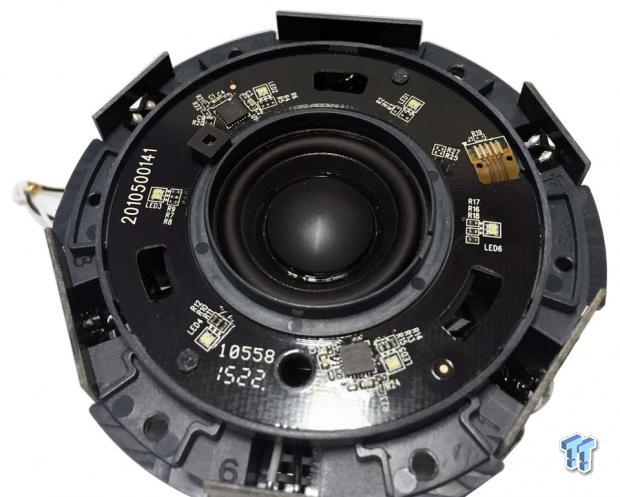 Looking at a few of the bits that we had to remove to tear this router down, here we have the speaker. 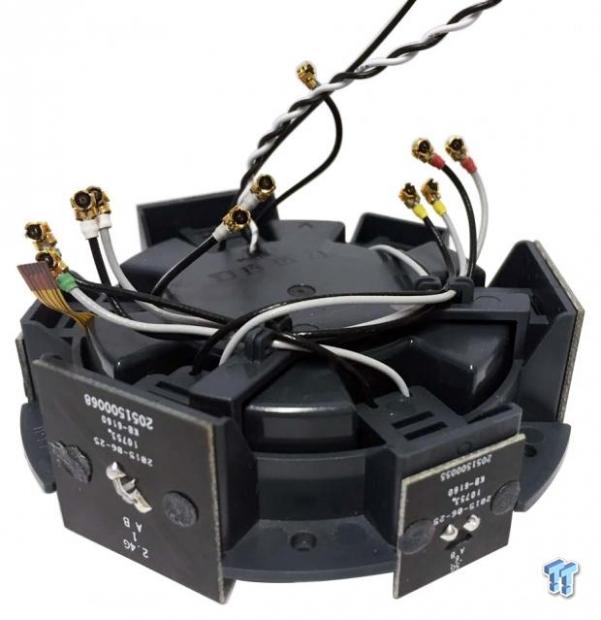 Around the edge of the speaker, we do have a full array of antennas as seen above. 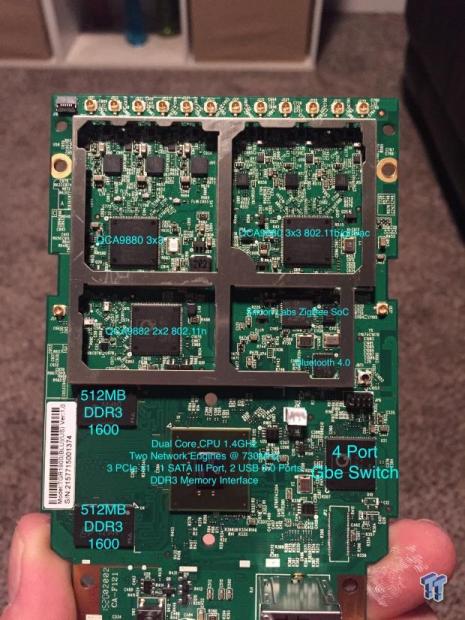 Diving a little deeper into the OnHub, I removed the heat sink and took note of what each IC is on the PCB. The top houses both of the 9880 3x3 radios while below we have the 2x2 radio and the ZigBee and Bluetooth 4.0 SoC. Further down there is 1GB of DDR3 and the main dual-core CPU with a four-port gigabit switch to the right. 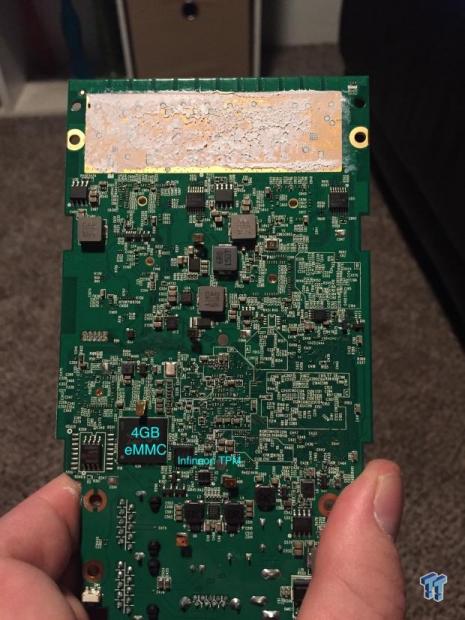 ON the back of the PCB, 4GB of eMMC is placed next to the TPM. 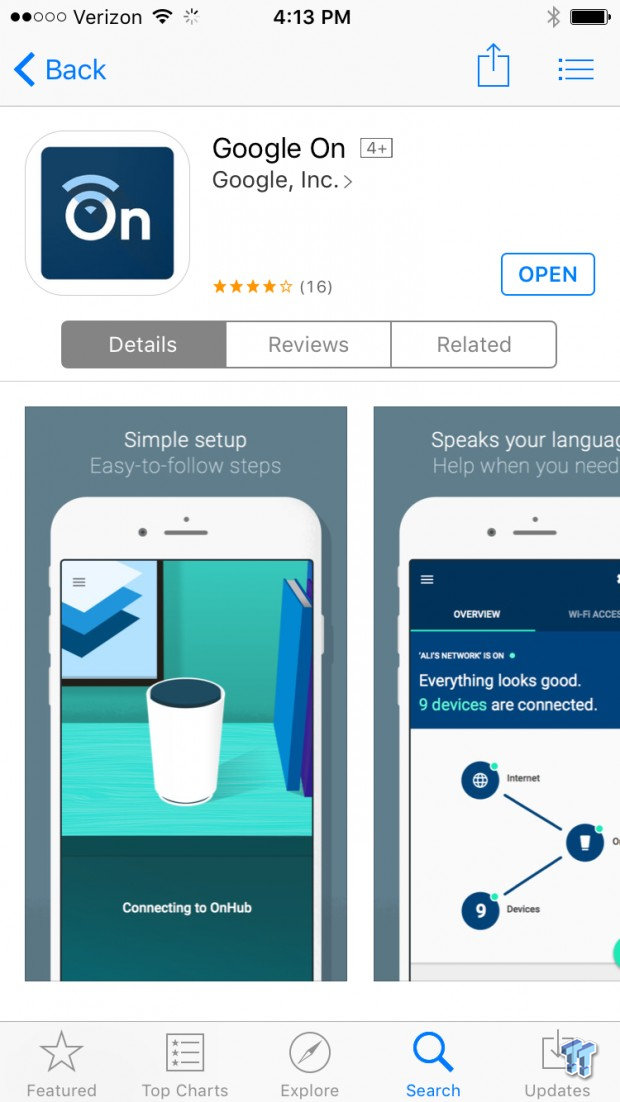 The management of the Google OnHub is controlled by the Android or iOS app alone and is freely available. 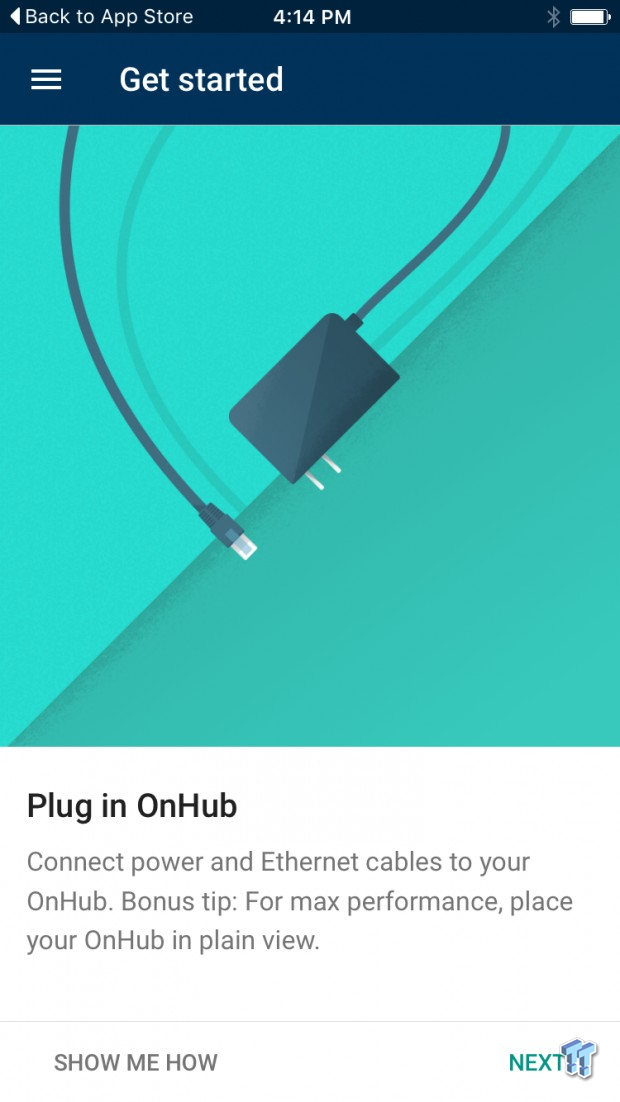 To get things started off, we launched the app and plugged in the OnHub. 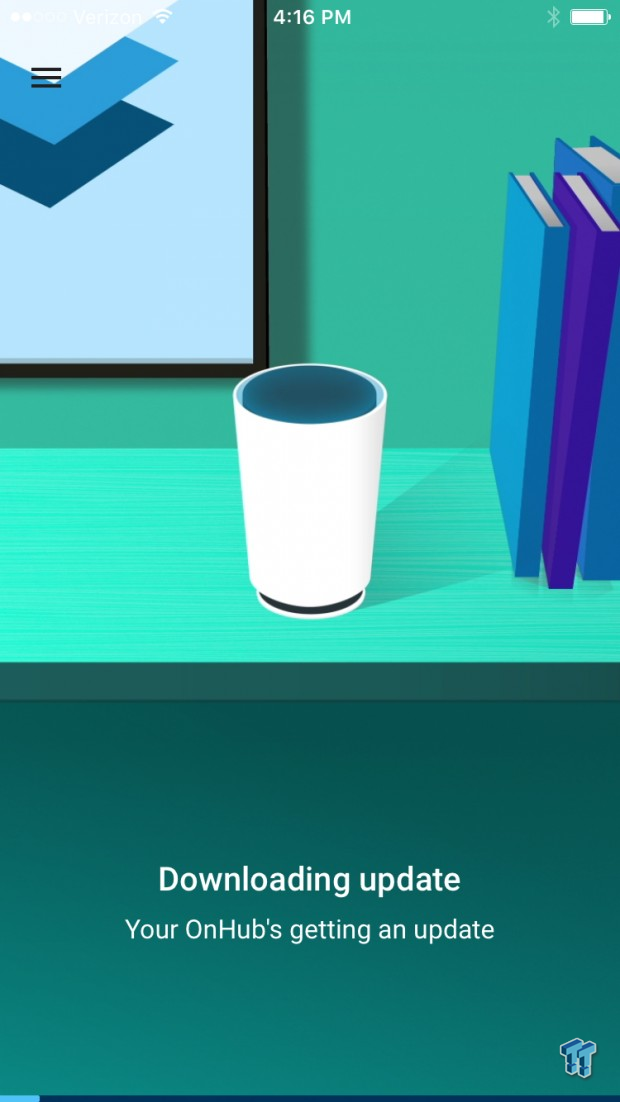 After a few second the OnHub was found and took an update. 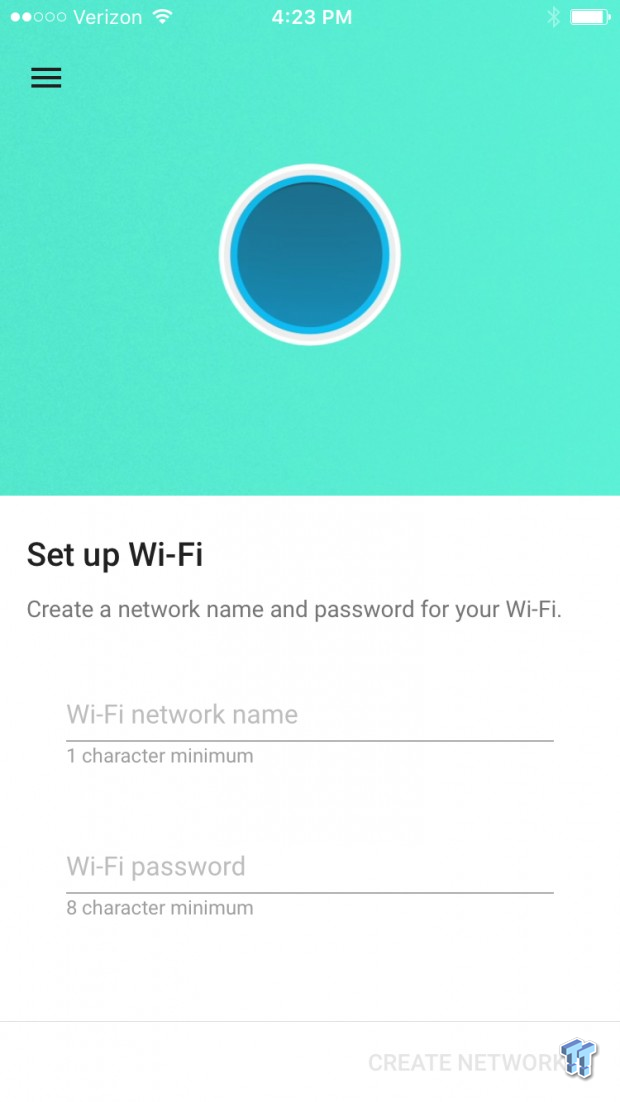 The next step was to set up our Wi-Fi network. 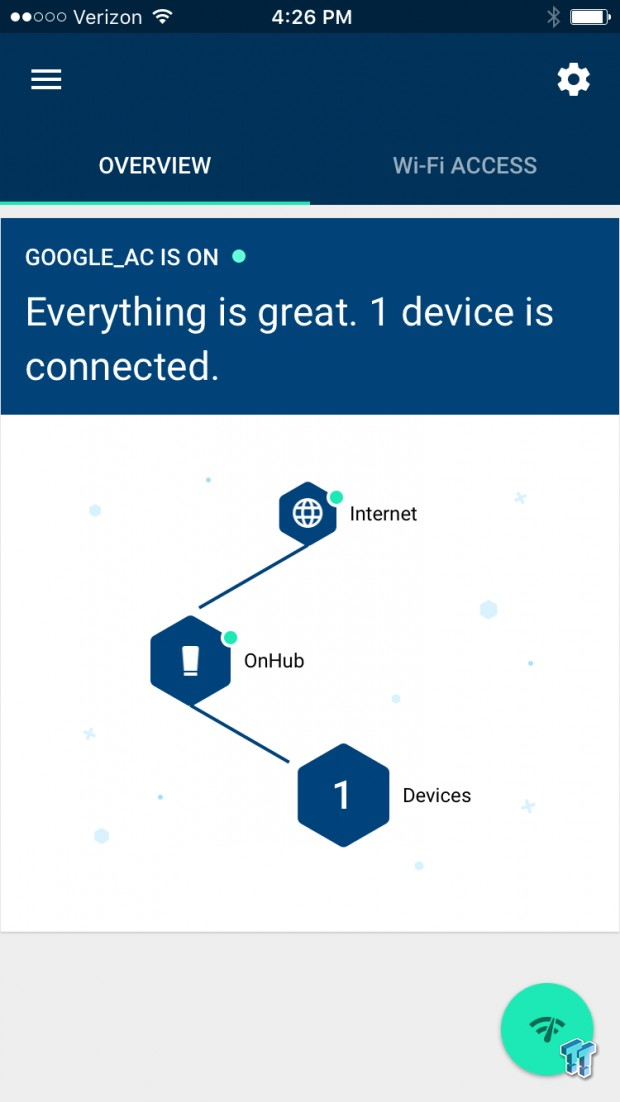 After setup was complete, we launched the app and noticed the main page has the status of the router at the top along with the devices that are connected below. 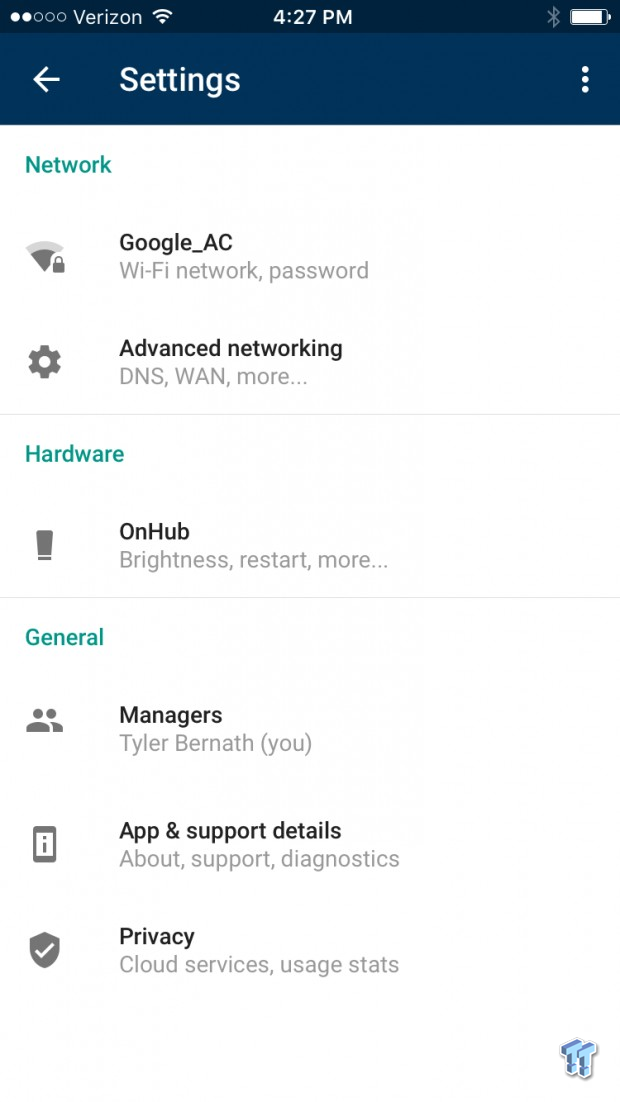 Here we have the settings menu. Within this menu, you can change everything from network settings to ambient light brightness. 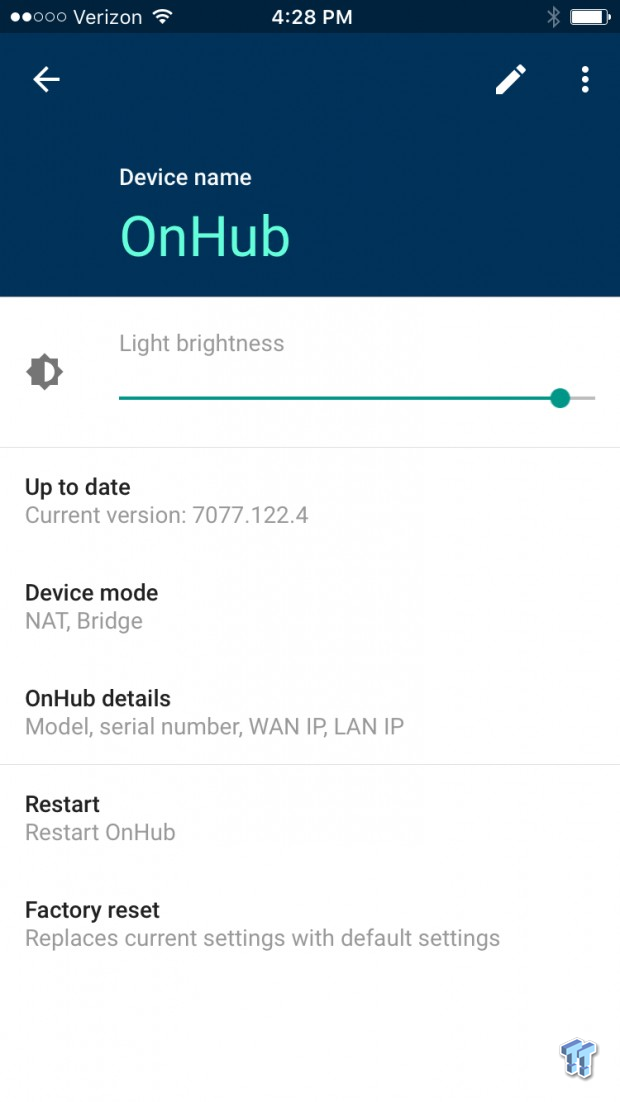 Here we have a few more settings including firmware, device mode along with options to restart or reset the router. 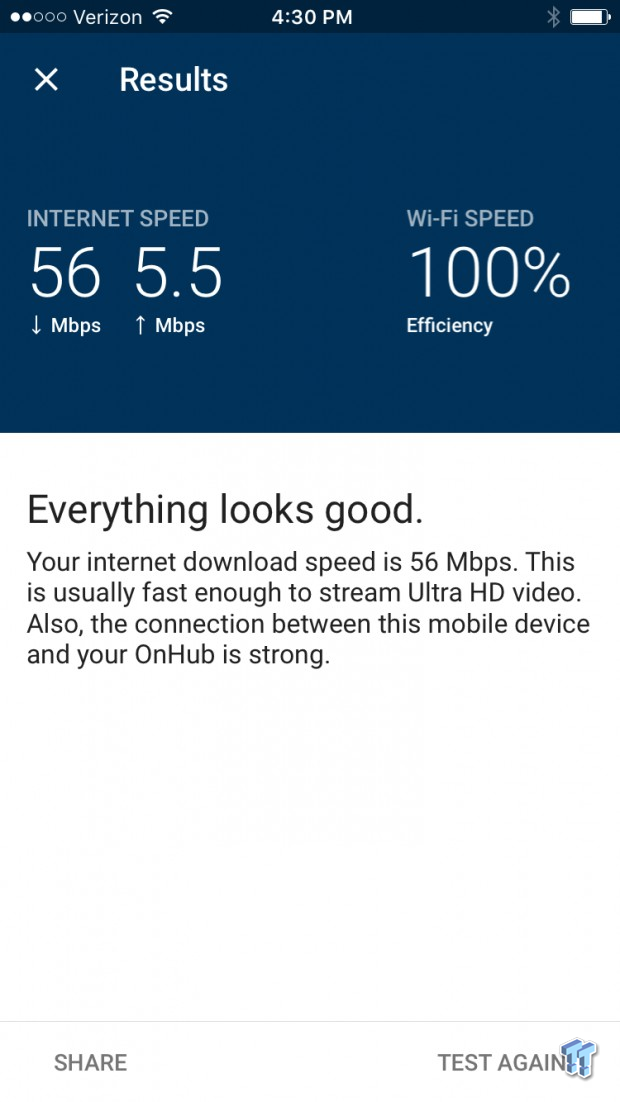 Another unique feature of the OnHub is the ability to take a speed test within the app and test your connection to the router itself. 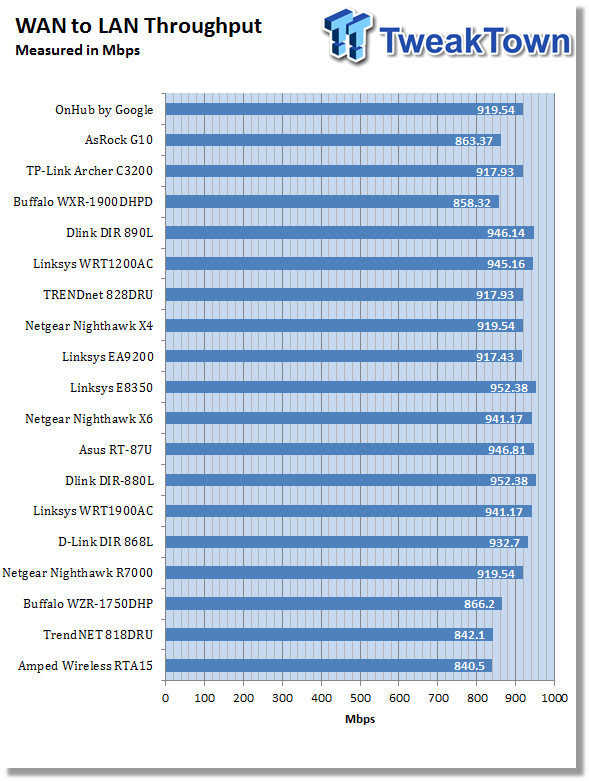 Testing the OnHub started off with the WAN to LAN throughput. As you can see, there was nothing holding this router back as it reached 919 Mbps. 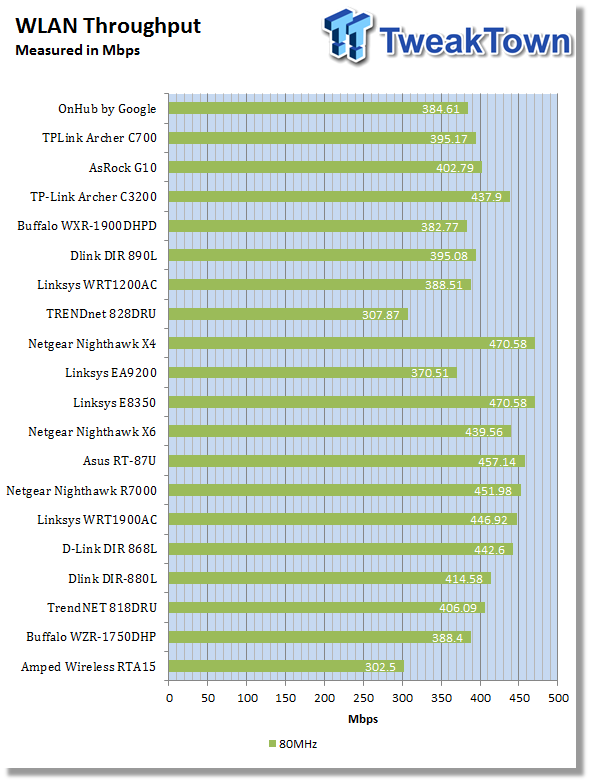 Next up we have the WLAN throughput and as this router chooses that band to put you on based on the device you are using we have one test.

In our testing, we were able to grab 384 Mbps out of the OnHub. 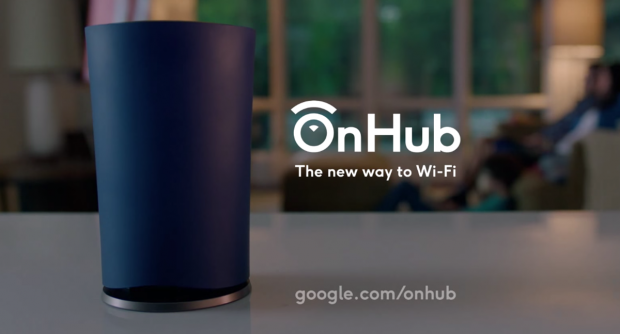 The Google OnHub by TP-Link is certainly unlike any router I have tested, and I mean that in two ways. The first is its aesthetics as it's certainly nice to look at and would compliment any desktop as a functional piece of art. The second part is its hardware configuration, and by that I mean while we have seen plenty of AC1900 solutions come through we haven't seen any come through offering 14 antennas. The build quality of this router is truly superb, as all the plastics are finished and fit together quite well and in my experience very difficult to separate. The ambient light ring on this TP-Link solution is subtle, so you don't have the blinding effect and at the same time offers a bit of class to the router.

The performance of the OnHub was quite good. We achieved top throughput for gigabit in our WAN to LAN testing, and when switching over to wireless throughput, the OnHub clearly chose to put our test system on the 802.11ac network as we reached around 390 Mbps. With that said, there is no web management for this router, as everything is done within the smartphone app. With this smartphone app, the OnHub team has made it consumer friendly. So, while you don't get the typical in-depth tuning settings most routers have, you do get options for changing SSIDs, password and the like.

Adding to this, the OnHub isn't made to be tucked away into a corner with an intense amount of wires coming from it. It is made to have just three wires coming from the unit and to sit in the open to be shown off as a piece of tech artwork. Seemingly this is why the router has just a single WAN and single LAN port so users that like to have their PCs wired will need to purchase a separate switch.

Overall, in my month of testing this solution as both my home router and in our test bed, I am sold on its ability to shoot wireless signals to places that have never been touched previously. Adding to this its ease of use and comforting looks the OnHub is a solid router fit for any consumer network.

The Bottom Line: Google's OnHub by TP-Link is more than just a router, it's a platform for vendors to build on. It is built from the ground up to be a simple high performance solution that is both user friendly and offer a plentiful amount of features and that is exactly what the TP-Link solution has done.