We've mentioned a few times that we thought the release of a new chipset at Computex followed with a release of a new high-end Intel CPU for the LGA 2011 platform would bring with it a rush of new memory. Instead we've seen very little movement in the market. We're not sure if we've hit a bit of a standstill when it comes to speed and timings or something bigger is coming later down the track.

Saying that, we do have a new kit of RAM on our hands today from Corsair. This particular one falls under the Vengeance Pro line which isn't a new one for us. Recently we saw a 16GB PC3-14900 1866MHz DDR kit from Corsair, along with the higher-end 16GB PC3-19200 2400MHz DDR kit for people who are looking at something a little faster.

Today we're looking at something a bit faster than that, but before we get into what exactly we're dealing with, let's see what's going on with the kit itself. Looking below, you can see we're not dealing with anything that we really haven't seen before. Like the higher-end PC3-19200 kit, this particular set comes with the red insert. The PC3-14900 kit carried with it the silver one. 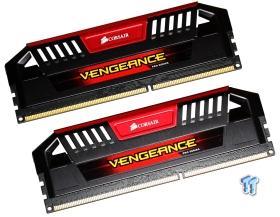 The black and red combination looks great, but one of the things we love about these Corsair kits is the fact that they also use a black PCB. As always, we know it's only aesthetics, but it doesn't change the fact that it makes the kit look very cool. 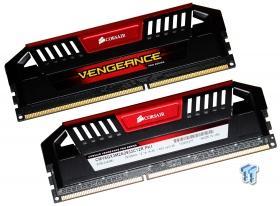 Looking at each side, you can see we've got the Vengeance Pro Series logo on one side, while the other side has a sticker that gives us a rundown of all the major information. Moving in a little closer, we can see exactly what we're dealing with here today.

Looking above, you can pretty much see exactly what we're dealing with the CMY8GX3M2A2933C12R model number giving us a fairly good idea. We've got two sticks on hand with both being 4GB each, bringing a total of 8GB. As for the stock speed, you can see it's a massive 2933MHz DDR.

The biggest trade-offs to memory kits that come off at this speed is the fact that they're usual smaller in size, in this case it's an 8GB kit, instead of 16GB, which is what we mainly see these days. Along with that, though, the timings are always a lot looser. You can see when it comes to the timings, we're dealing with a 12-14-14-36-2T @ 1.65v kit.

Throwing the kit into our system, we powered up our GIGABYTE Z87X-OC Force. This is the first time we've used the board and we're really looking forward to seeing just how it goes. With the kit installed, we fired up our system and headed into Windows with the kit just running at a low 1333MHz DDR. Before we did anything, we wanted to grab the latest BIOS for the board, which at the time was the F7 version.

With the new BIOS in hand, we headed into the BIOS and updated to the latest version. With that all done, we headed back in and set the XMP Profile to number 1. We then double checked that the speed looked corrected and proceeded to reboot the system. We didn't run into any problems at all with the stock settings. 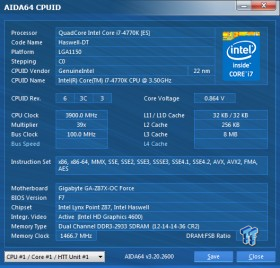 These numbers are about where you'd expect them to be considering the speed of the kit. As always, the next thing we try to do is see if we can get anything more out of the kit. To date, though, we really haven't had much luck at all when it comes to going above 2933MHz DDR. We're not sure if it's been our motherboard or our CPU or the RAM itself. We've never had any issue getting 2933MHz DDR, but trying to get higher by an increase in BCLK or memory divider has always resulted with our system no longer booting.

Saying that, though, we're dealing with a new motherboard and of course a new kit of RAM, so we headed into the BIOS and tried to adjust our BCLK higher as there was no option for a memory divider above 2933MHz DDR. We moved up to just a 101 BCLK and had no issue booting and getting into Windows. We then started moving up .2 BCLK at a time until we ran into problems. 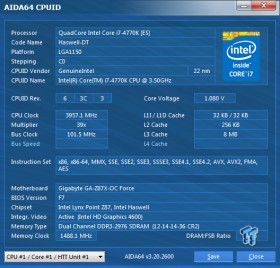 Going to 101.6 BCLK resulted in our system no longer booting. Moving back just .1, though, to 101.5, saw us get into Windows with no problem with the exact same timings. Looking above you can see our memory comes in at 2976MHz DDR with the 12-14-14-36-2T timing setup. To date this is the highest clock speed we've had on a kit of RAM. We're not sure if it's the new board we're using, a more updated BIOS since the last time we tested RAM or just the RAM itself. In the end, we're not going to complain, though.

Along with the higher memory clock this also brings with it a higher CPU speed due to the increase BCLK. As you can see in the above image, we've gone a little higher from the default 3.9GHz to 3.96GHz. With everything looking good, it's time to get into the benchmarking side of things again.

Under AIDA64, we ended up with Read / Write numbers of 29,629 MB/s / 35,508 MB/s, Copy speed of 30,437 MB/s and latency of 41.1ns. While this is an overclock from the stock speed, it's not a massive increase. For that reason, we didn't expect a massive jump in performance. Looking above you can see that compared to our original numbers, we've just got a small increase in performance across the board, along with a slight reduction in latency.

The next thing we do once we've found our maximum overclock is head back into the BIOS and increase our CPU speed, while leaving the memory at the same overclocked speed. Looking below you can see we've pushed our CPU up to 4.47GHz via a 44x multiplier and 101.5 BCLK. The memory runs just a little higher at 2978MHz DDR with the exact same timings. 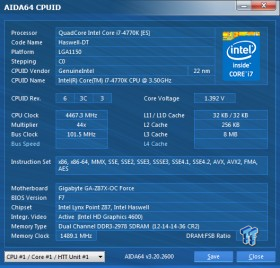 This isn't anything new, nor is it an error. The release of the Z87 platform has seen memory performance barely change when overclocking the CPU - no matter how high you go. We've tested it on a number of motherboards, CPUs and RAM kits.

The Corsair Vengeance Pro PC3-23400 8GB Dual Channel memory kit doesn't hold much in the way of surprises. The Vengeance Pro series isn't a new one so the overall design isn't new to us. When it comes to the performance side of things, it sits where we'd expect it to. The numbers are strong across the board.

I think the biggest surprise comes from the overclocking side of things. Sure, 2978MHz DDR isn't a huge increase from the 2933MHz DDR stock clock, but it's the highest clock speed we've had to date and that's never a bad thing. Whenever it comes to these kits that carry such a strong out of the box clock rate, though, we've always got to mention the importance of your CPU. If you're buying a 2933MHz DDR kit, you'd really want to know that your CPU can handle the clock speed - without actually testing the kit that can be hard to know.

Testing these high-end RAM kits are always fun and it's awesome to go into Windows with the RAM running at such high speeds. These kits are in no way for everyone, though, for a number of reasons. While we haven't got a price on the kit, we know it's going to carry a premium, like others that come in at 2933MHz DDR. The other reason that these kits aren't for everyone is that they'd prefer to have 16GB kits at lower speeds for less.

If you're looking for a kit with serious speed and you don't mind the fact that it's an 8GB one, then this Corsair kit is perfect. The quality of the kit is great, the looks are fantastic, the performance is extremely high, and if you've got a CPU that's capable, you've got more head room. This is the kind of kit that is either perfect to you or no use. It just depends what you want and need, but if you want high-end, it might well be your answer.