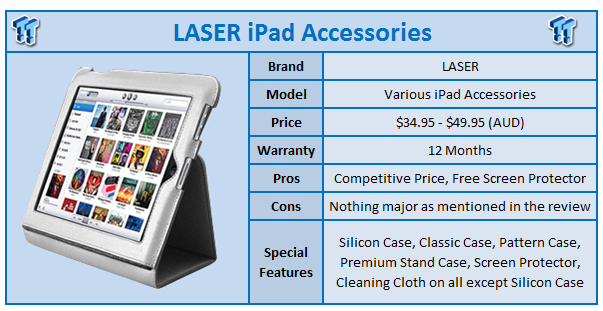 Apple is such a phenomenon these days that we see so many companies offer accessories for an iSomething. Today we'll be having a quick look at the iRange Accessories from LASER to suit the iPad. What we're dealing with is four cases for the iPad that all vary in what they're capable of doing.

Between the four cases we've got a couple of similarities; the package between all four cases is almost identical with most of the package being made see-through so we can see the case itself. We've got the model on the front and on the back we've got a small snippet of information that relates to the actual case.

Something cool about each package is the inclusion of a free screen protector. While it's of course your decision as to whether or not you want to make use of it, they're a nice little addition to the iPad as it ultimately helps protect your costly investment. We've also got included on all the cases (except for the Silicon Case) a free cleaning cloth which is again a nice little free bonus.

With the packaging out of the way, let's have a closer look at the cases themselves. First up, let's look at the Silicon Case available in both black and white. There's really not a whole lot to this case; it's essentially a silicon glove that goes around your whole iPad and covers the back. All your buttons are easy to access along with cut outs for speaker and dock connector. 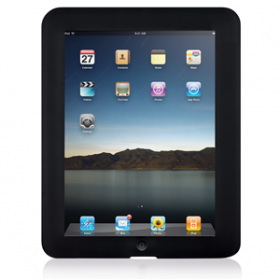 Coming in at $34.95 AUD, it's the cheapest case. It's not because it's cheaper feeling than the others we're looking at, but more so because it's simple. Only a little bit of thickness is added to the iPad and with the screen protector included it's a nice little buy. We'd just be a little worried about the Silicon stretching over time if you had to remove and install the cover regularly. We're not sure why you would, but it's something worth noting.

If you're looking for something with a bit more protection and don't mind it being a little thicker, then the Classic Case or Pattern Case could be exactly what you're after. With both coming in at $44.95 AUD, they're more expensive, but at the same time there's more to them.

The Classic case is available in red or black and is made from a soft "PU Type" leather that LASER say gives a luxurious touch. And to be honest, we have to agree with them as it does feel really nice and soft while also looking quite smart. The black one we had felt like this anyway; we're not so sure about the red one personally. When closed we use a strap that feeds through a little pocket that helps keep the device closed; it feels a little fiddly sliding the strap in, but it's not a major issue. 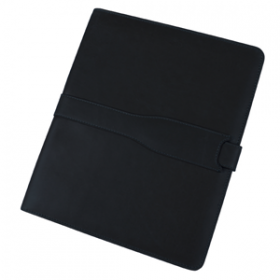 The soft touch PVC Pattern Case comes in black and is designed to give a crocodile skin look and feel. Its overall design is similar to that of the Classic Case except instead of the strap we've got a magnetic latch that helps keep the cover closed. From the outside it's a nice design and is probably a bit more female friendly as it's not so plain looking. 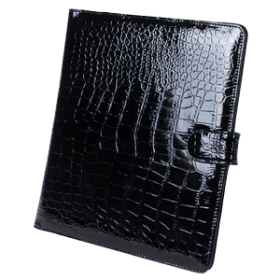 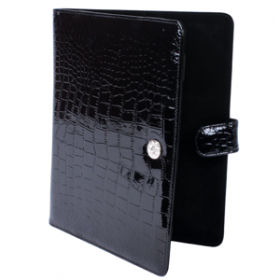 Inside both the Pattern and Classic case is identical with a felt lining throughout which keeps with that classy high quality feel that LASER are giving us on the front. We're split into two main sections once we move inside; one side offers four tabs that mount the iPad in securely. It's quick and easy and isn't intrusive to the screen which is what you want. Due to there being no moulded cover like the Silicon case, everything is easy to access without the need for cut outs. 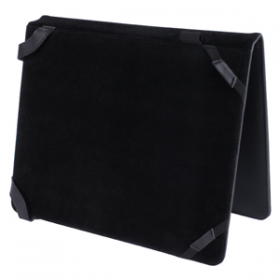 The other side gives you a few pockets which can carry cards or some cash. It's quite nice and if you just wanted to head out with your iPad in hand you could throw a credit card and some cash in and be on your way. It's nice to see that LASER chose to make use of the extra space.

The final case we're looking at is the Premium Stand Case which comes in Black and Silver and a higher $49.95 AUD price tag. I have to say, out of the four this is my favourite case as it most resembles what I currently use. This case also doubles as a stand which is a handy feature. If you wanted to watch a movie you can have it sitting like the below picture. 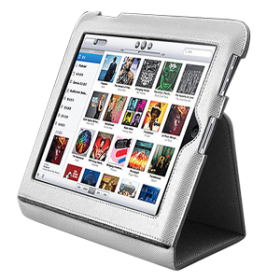 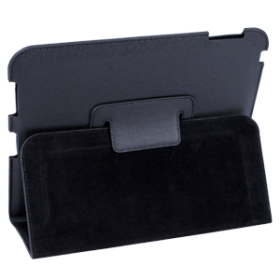 On the other hand, if you lay down you've got a nice angle on the iPad which makes typing nice and easy which is one of the biggest benefits to this case design. Like the Silicon case, we've got cut outs for the important bits like volume control and dock connector to name just a few.

What I found personally so nice about this case was the fact it was still quite thin. Currently I use a Yoobao leather case that was slightly more expensive and while I'm happy with it, the iPad on a whole becomes quite thick because of it. The Premium Stand Case on the other hand from LASER is a lot thinner and because of that it feels a little nicer to carry.

The only gripe present with the Premium Stand Case is the lack of magnetic latch. When sitting in my stand it sits open slightly. If I lay it down, though, it is fully closed. Like the other cases it's just a small gripe and we're clutching at straws because if we did have a magnetic lock it would be thicker, making it probably not stand out as much.

What LASER has got is a really nice line-up of cases that cover every segment. We've got something like the Pattern case for people who want a bit of flair, the Classic case for, well, people who want something more classic along with the Silicon case which just adds a layer of protection to your iPad and of course the Premium Stand case that offers something different to the other three.

Like everything, there's probably something that could've been done slightly different in some areas, but for the most part we've got some really nice, high quality and well priced cases. Just to add a bit more value to the whole setup as well, LASER have included a screen protector in all of them and a cloth in the three more expensive ones.

If you're looking for a nice high quality case for your iPad, make sure you have a look at the LASER line-up. The variations between them are sure to mean there's one that will suit yours and your iPads needs.