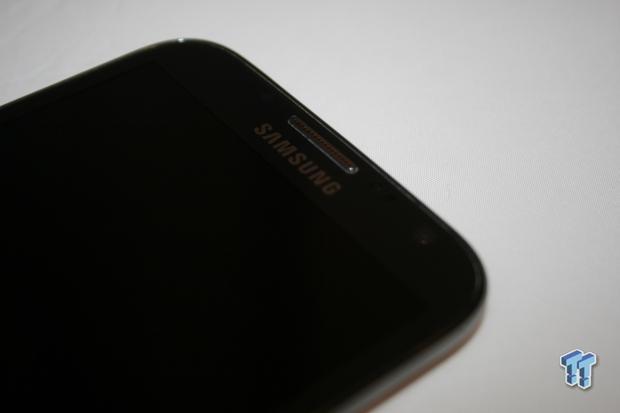 Samsung entered the market with their 5.3-inch Galaxy Note not expecting it to sell well, but they pretty much single-handedly created the 'phablet' market we all know and love today. Before the Galaxy Note was released, smartphones at the 5-inch market were laughed at, and considered tablets. Samsung changed all of that.

Most people expected Samsung to increase the size of the Note II's screen from the 5.3-inch on the Note, but they didn't change it too much. Samsung increased the screen size to 5.5-inch, which isn't too much of a change at all. It is still big enough to keep the Note's customers, and gain more at the same time.

The Galaxy Note II is an evolution of one of the best-selling smartphones on the market, but at the end of the day, there isn't much new on the Note II. Let's jump into the review. 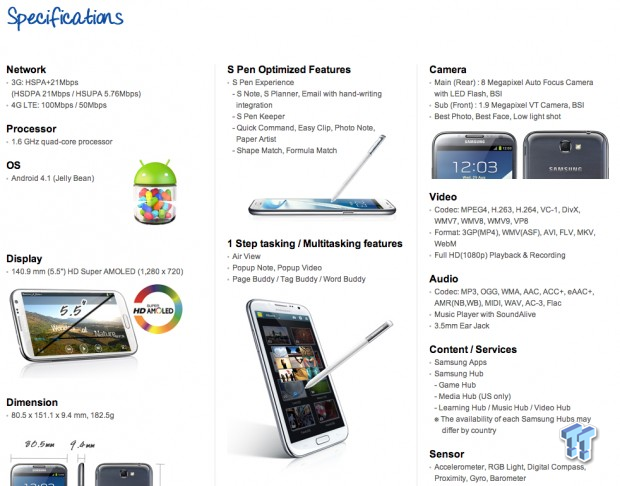 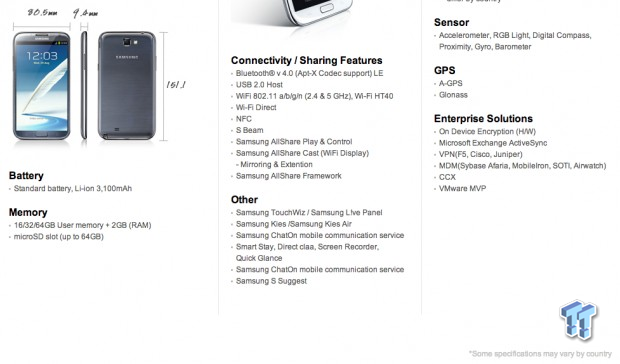 The Note II has a quad-core Cortex-A9 processor with a Mali-400MP GPU. This is close to twice the CPU that the Note packed, which had a dual-core 1.4GHz Cortex-A9 processor, and funnily enough, the same GPU. You'll see how that GPU performs later on in our review, something you'll find as surprising.

We have an 8-megapixel rear-facing camera backed up by a front-facing 1.9-megapixel camera. There's 4G LTE capabilities (depending on which country you buy the phone in), expandable storage through microSD, the usual Wi-Fi 802.11 b/g/n and dual-band support, Bluetooth 4.0 and NFC support.

We have the S Pen, Samsung's stylus, which has its own fun and games included and some upgrades that we'll talk about later.

Newegg are selling the Note II for $599 at the time of writing, and while I might sound like a broken record, it's more expensive than the Nexus 4 by a long shot. The Galaxy Note II, however, has some increased value for money - such as the bigger screen and stylus pen. This can definitely end up being something that will tip you over and buy the Note II.

This review comes off of the back of the Sony Xperia Z, which had an absolutely beautiful look and feel to it. After hearing so much about the Galaxy Note II, I wasn't looking forward to using another plastic-built device from Samsung.

The Galaxy Note II has a plastic shell, which feels cheap. Sure, the Note II has its fans, but for one of Samsung's flagship devices, I really demand more quality. In terms of size, we have (measured in inches) 5.95 x 3.17 x 0.37. 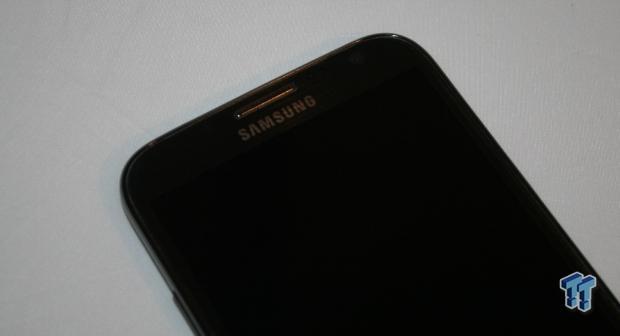 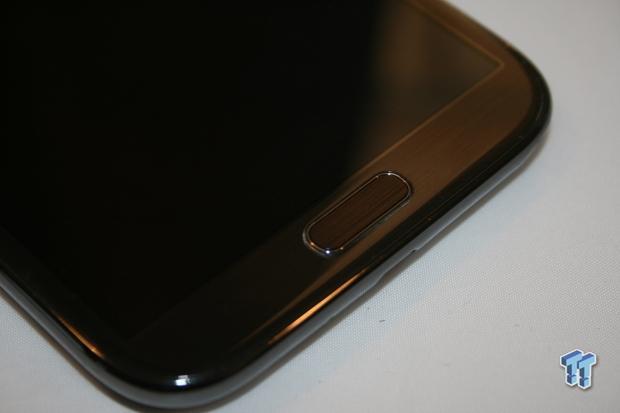 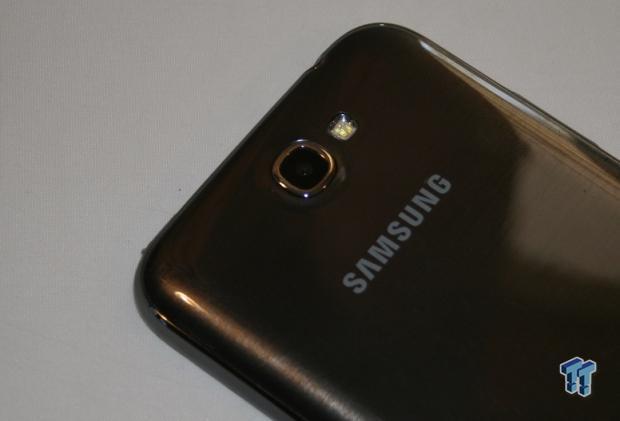 The back of the Note II doesn't feature much, with the loudspeaker on the bottom of the device, and up the top we have the rear-facing camera with LED flash and another Samsung logo.

On the right side of the phone we have the power button.

On the left of the Note II we have the volume rocker.

On the very top of the phone we have the usual 3.5mm headphone/speaker jack. 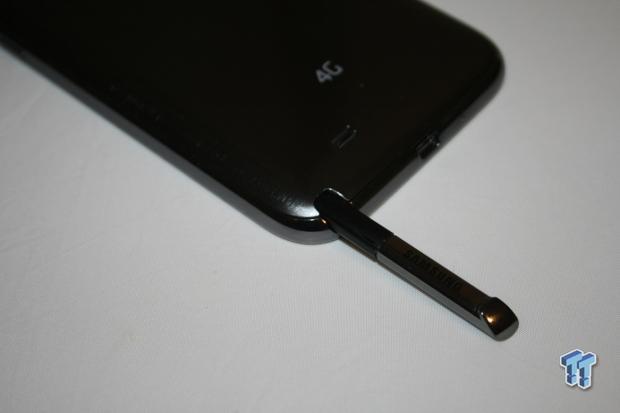 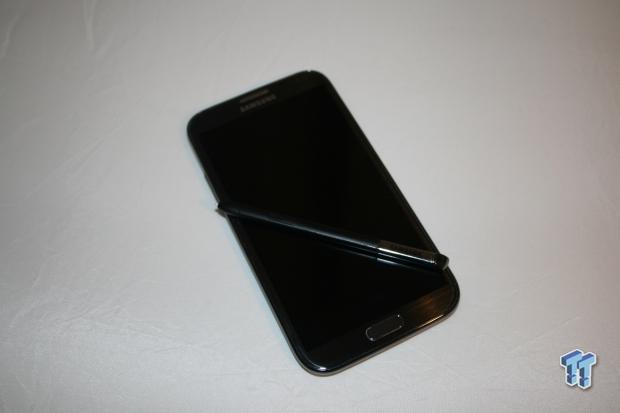 On the bottom of the Note II we have the microUSB port for charging and synching your 5.5-inch phablet, and to the right of that we have the S-Pen which can be pulled out and removed, and of course, used for various functions that we'll get into later in the review.

The 5.5-inch display on the Note II is large, but not too large that it ever feels too big to be a smartphone. This probably comes from using the Note previously, and owning multiple 4-inch (or thereabouts) smartphones. If you're coming from an iPhone (not the iPhone 5), moving from 3.5 inches to 5.5 inches is going to feel like you're holding a tablet in your hands.

While the display is big, that never automatically equals high-end or quality. Sure, 5.5 inches is great, but the 1280x720 resolution really brings it down. This comes into play when trying to multi-task with multiple windows on the Note II.

The 1080p display on the Xperia Z from Sony looked much sharper, so I suggest before you think about buying a Note II, see one in person. If I had to give the display a separate score, it would receive a 7/10 at best.

The external speaker on the Note II is great, something I expected from the not so average sized phone. I used the Note II to watch some videos, and play some music, both of which were great experiences on bigger than life smartphone.

The biggest feature that is worth mentioning on the Galaxy Note II is the S Pen stylus support. When the S Pen is removed from the Galaxy Note II, you're greeted with a message telling you that your 'S Pen has been detached' and it will provide you with a list of things you can do. 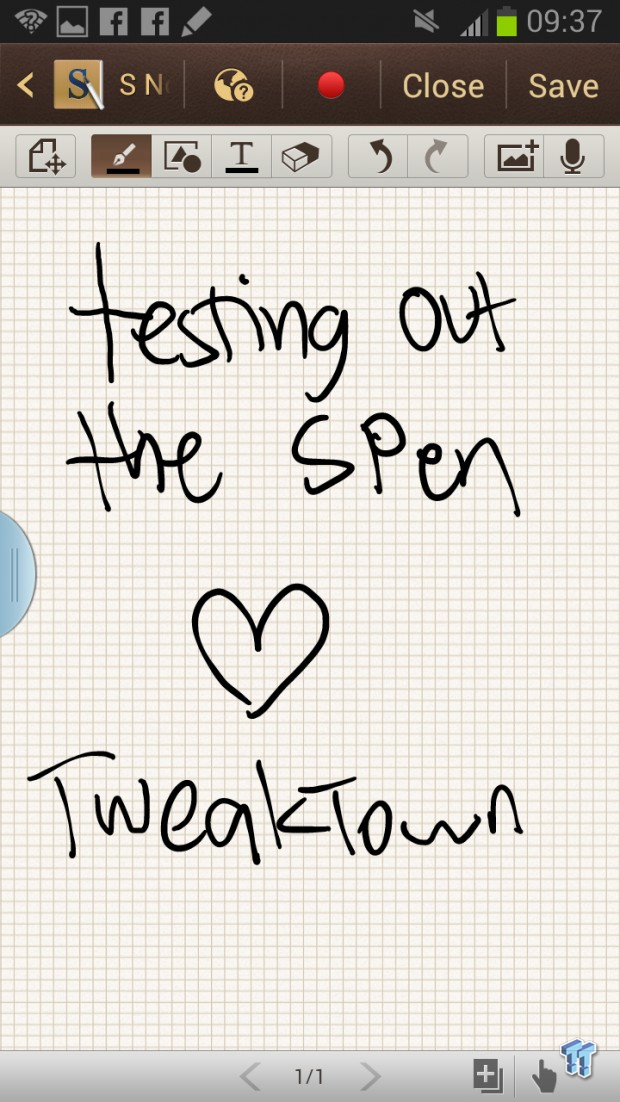 As you can see from the above shots, there is a bunch of things you can do. There's options for a Note, Idea note, Meeting note, Magazine, Diary, Recipe and many more. If using a stylus on your smartphone is something you might do, then the Note II is for you. 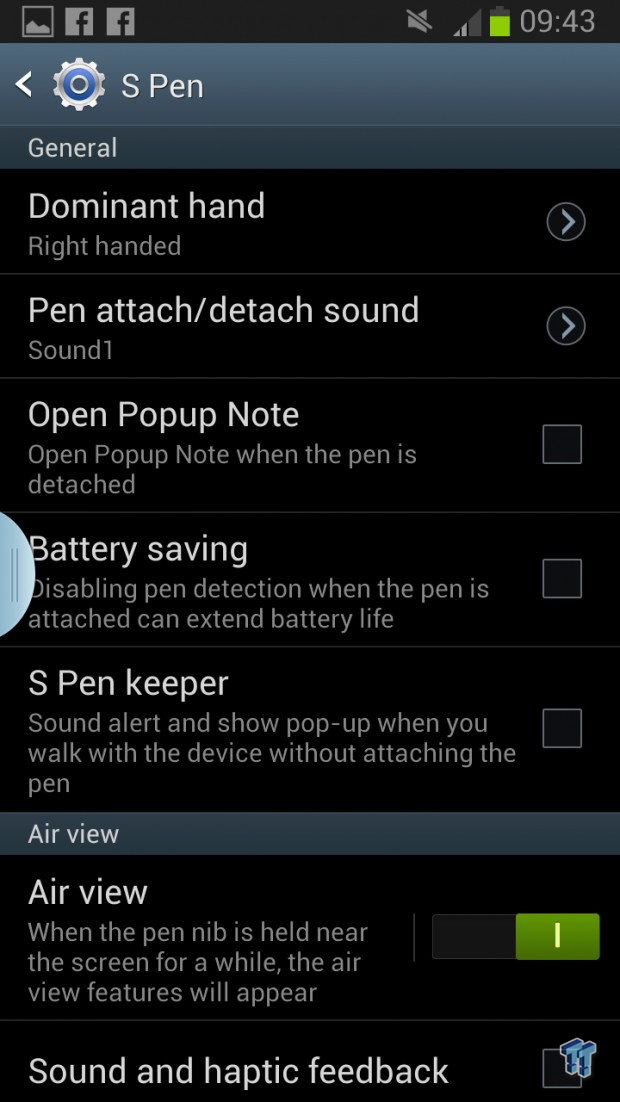 The S Pen options are quite vast, where you have the option of changing the dominant hand in case you're left handed. You can set a pen attach/detach sound, have the Note II automatically open up the Popup Note when the pen is attached, disable the pen detection when the pen is attached that can help with the battery life, and have a sound alert and pop-up when you walk with the device without attaching the pen - a great feature, in case you lose the S Pen.

Samsung will notify you by alert if you walk away from your S Pen - this little option, shows how much Samsung are thinking of you, the consumer. 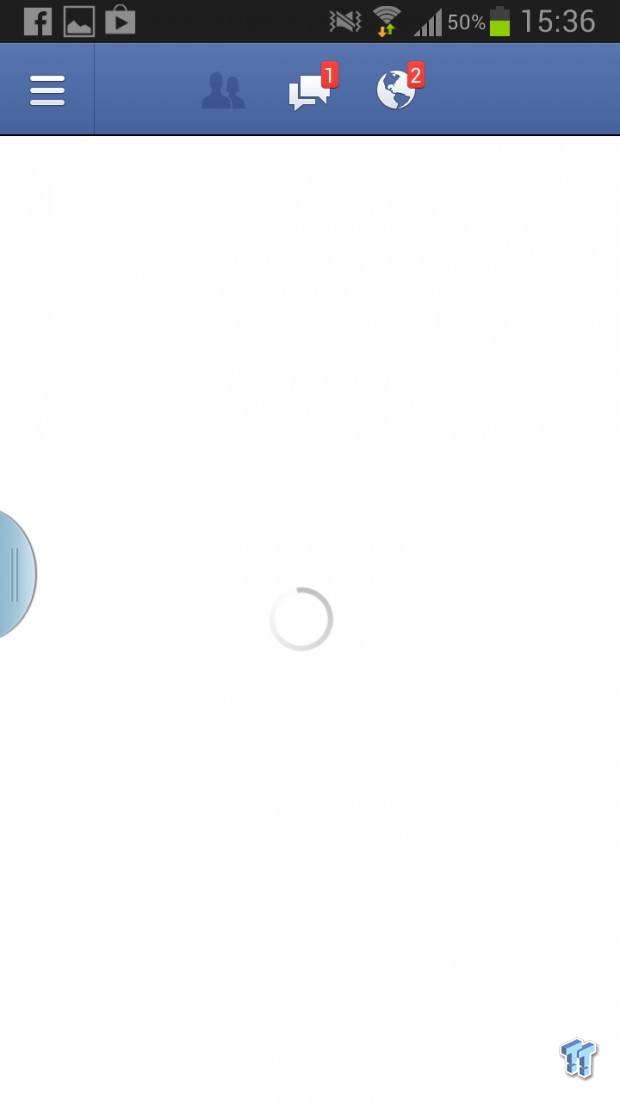 To the left of the screen on the Note II is a multi-tasking window. Tap and drag it out and you'll be greeted with your most recently opened applications. 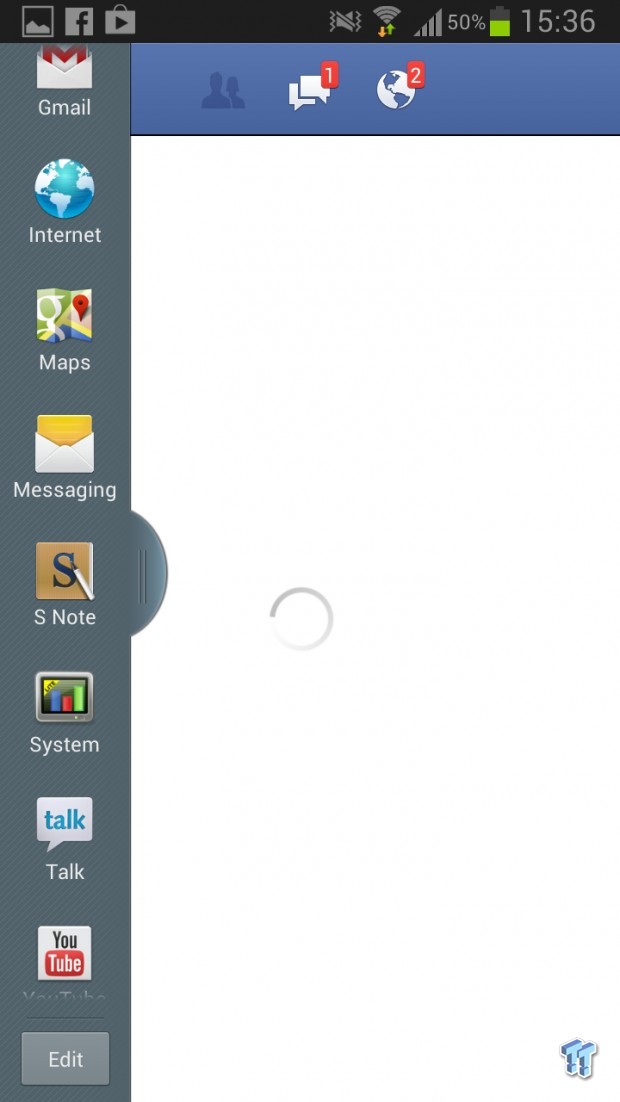 This is a nice way of doing your multi-tasking, but I found the button on the left annoying when reading text. 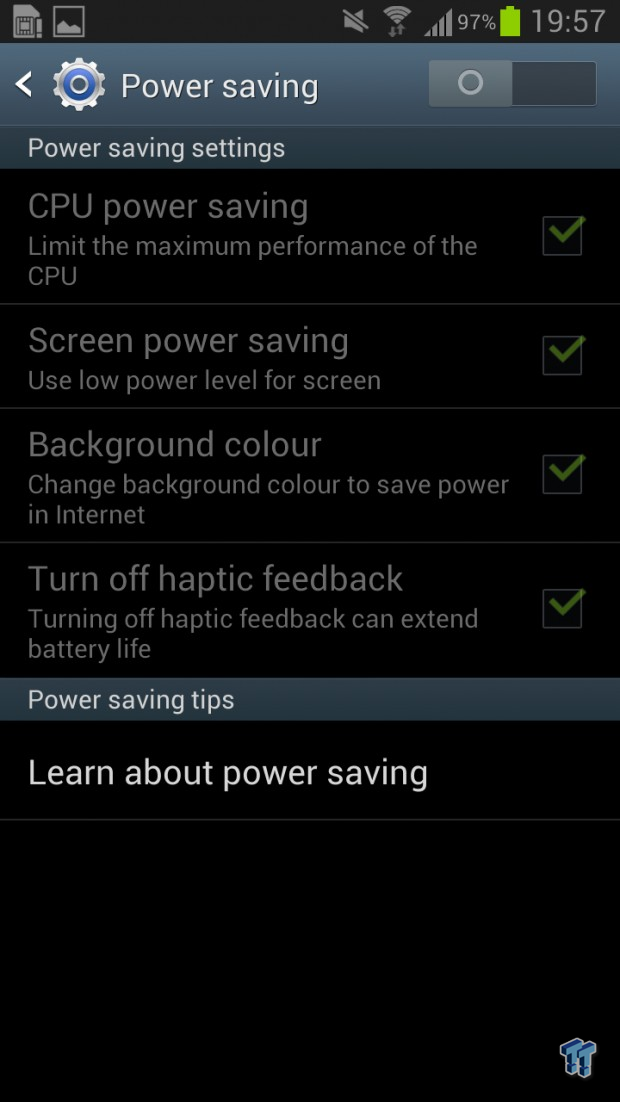 Samsung provide a bunch of power saving options, where you can limit the maximum performance of the CPU, use low power levels for the screen, change the background color to save power, and finally, disabling haptic feedback can save battery life. 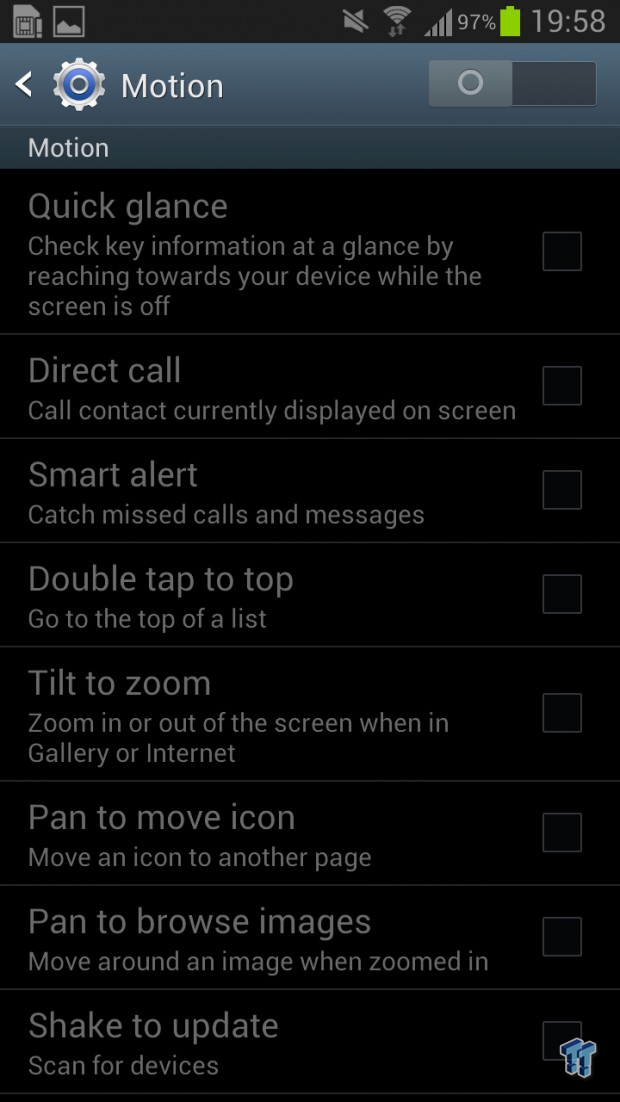 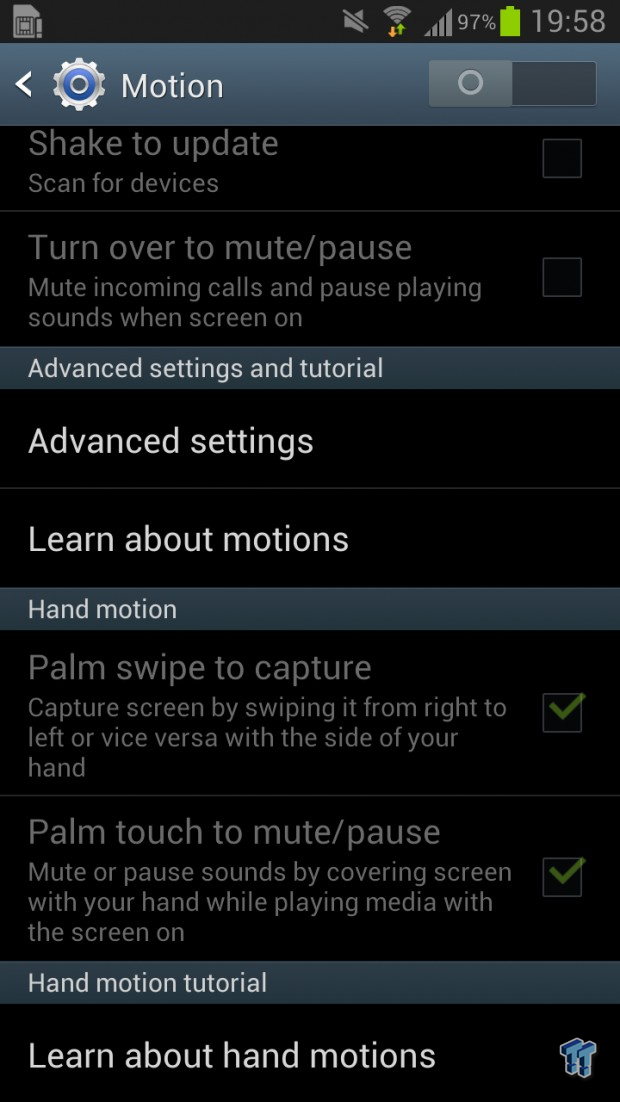 There's some Motion support built-in to the Note II, which is disabled by default, but when enabled gives you some very nice features to play with. 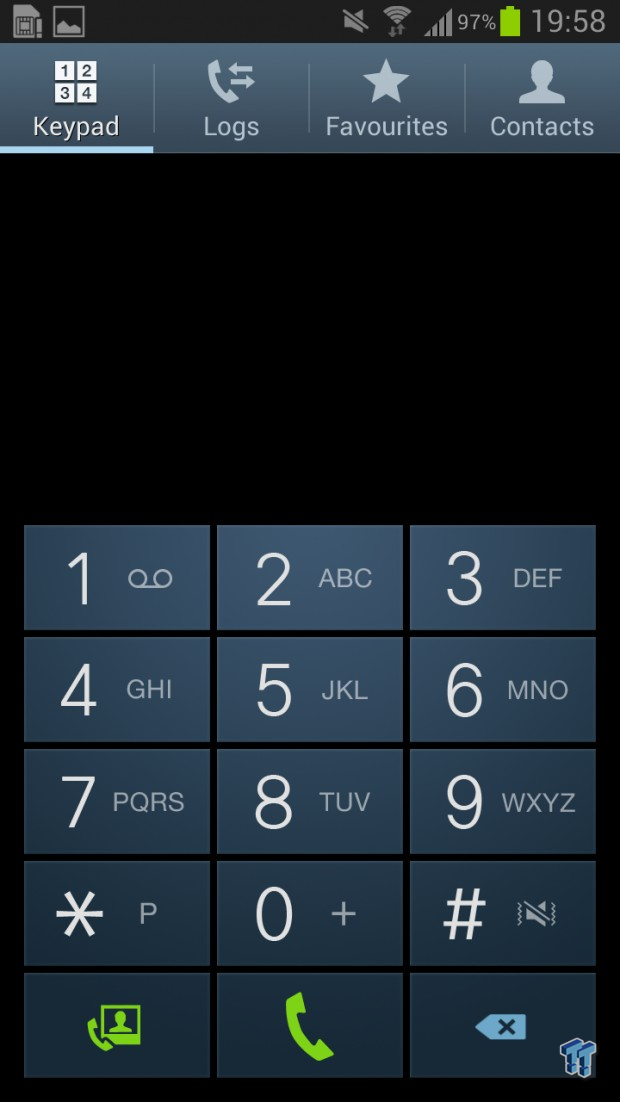 The phone portion of the phone - that's what we're here for, isn't it - is great. The buttons are absolutely huge thanks to the 5.5-inch screen, making this a great option for those with poor eyesight, or older consumers.

Because I write news daily, I'm reporting on pretty much all smartphones on the market. Samsung's Galaxy Note II was one of the biggest releases from the company, riding on the success of their original 5.3-inch Galaxy Note.

From hearing about the quad-core processor, 5.5-inch screen and so on, I expected great things in terms of performance. I was underwhelmed by the Note II's performance, especially in benchmarks. This is why I'm almost against benchmarking mobile devices, because at the end of the day, if one scores 50 and another scores 500 - but in general use they both feel the same - is there really a difference to the normal consumer?

Let's move onto some images from the camera. Here are some examples of the quality of the camera: 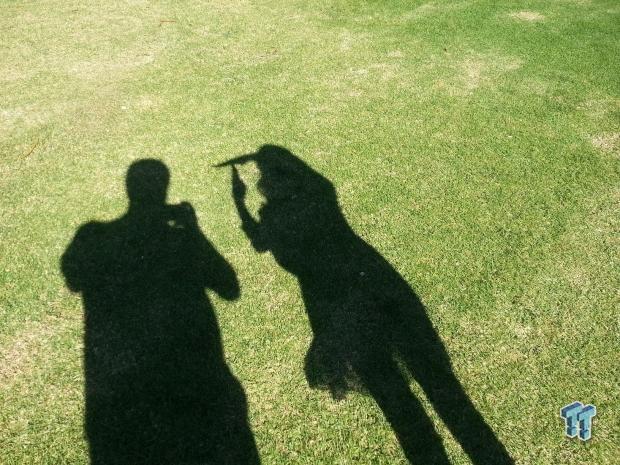 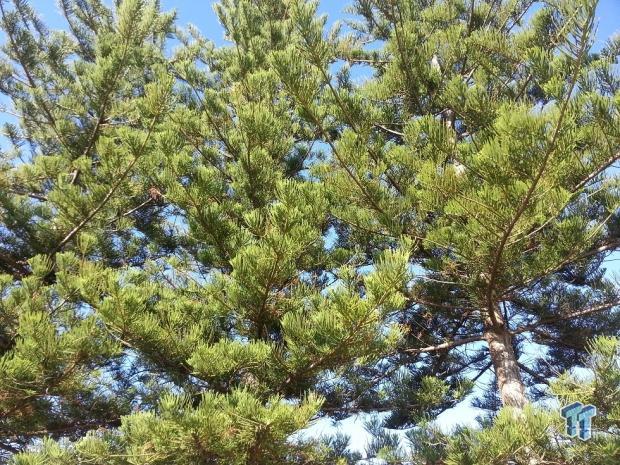 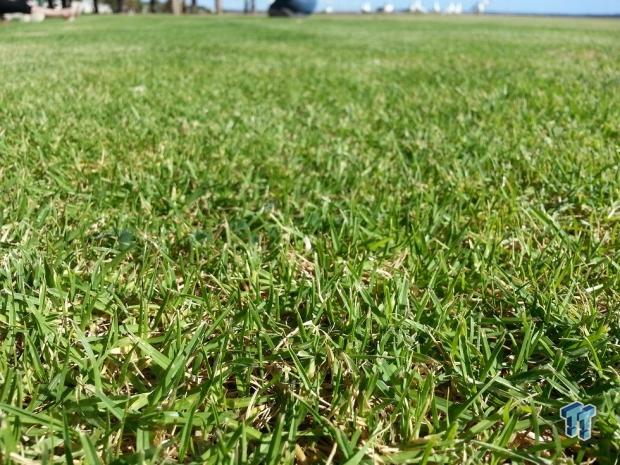 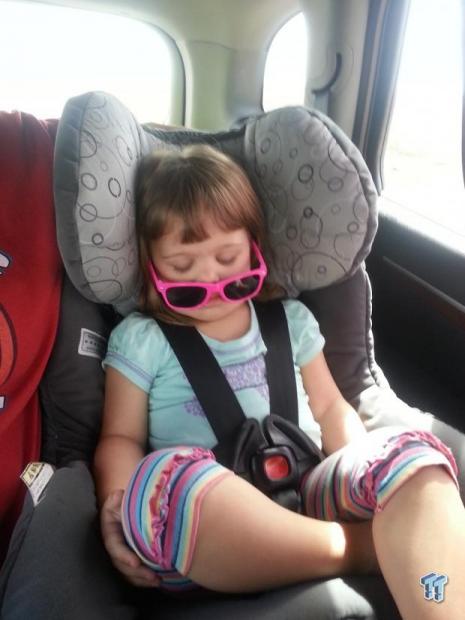 First up, we'll dive into some Basemark X results. 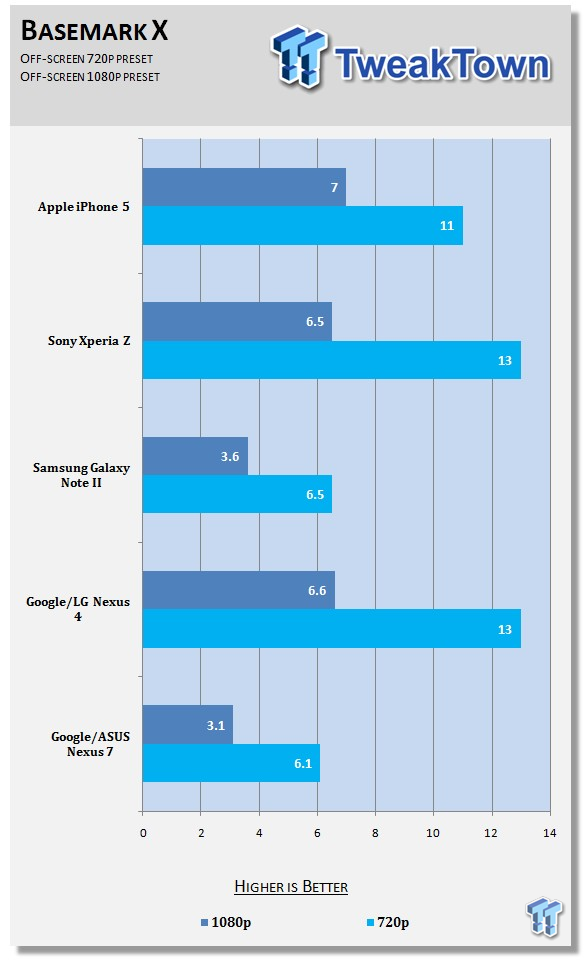 The Note II doesn't do too badly in Basemark X, when compared to something like the Nexus 7. But comparable foe found in the iPhone 5, Xperia Z and Nexus 4, it can't handle the truth - and sits back down on its bench. At 1080p, it scores just half of what the Xperia Z and Nexus 4 do. 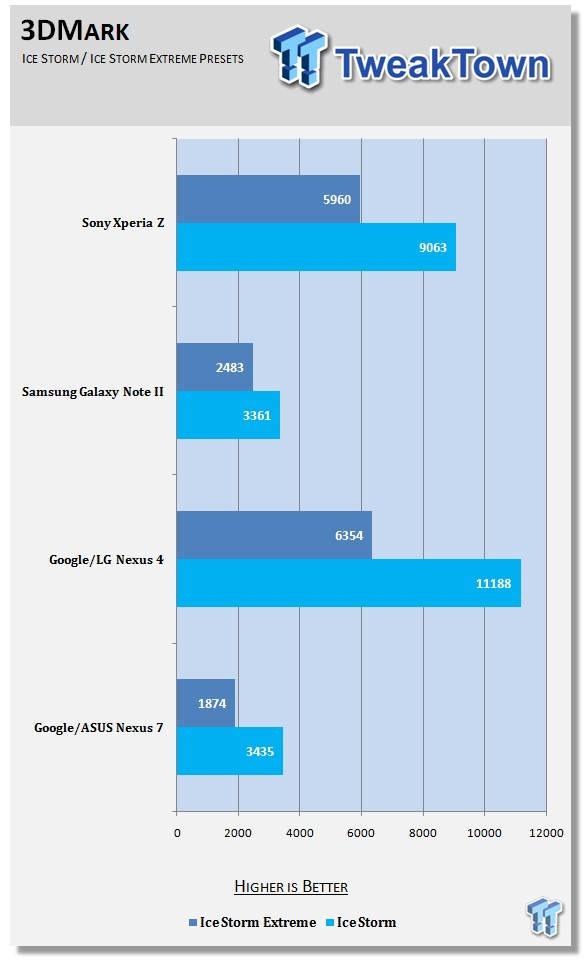 When we move into Ice Storm Extreme, the Note II continues to be unimpressive, scoring 2483 against the Nexus 4's 6354 and the Xperia Z with 5960. 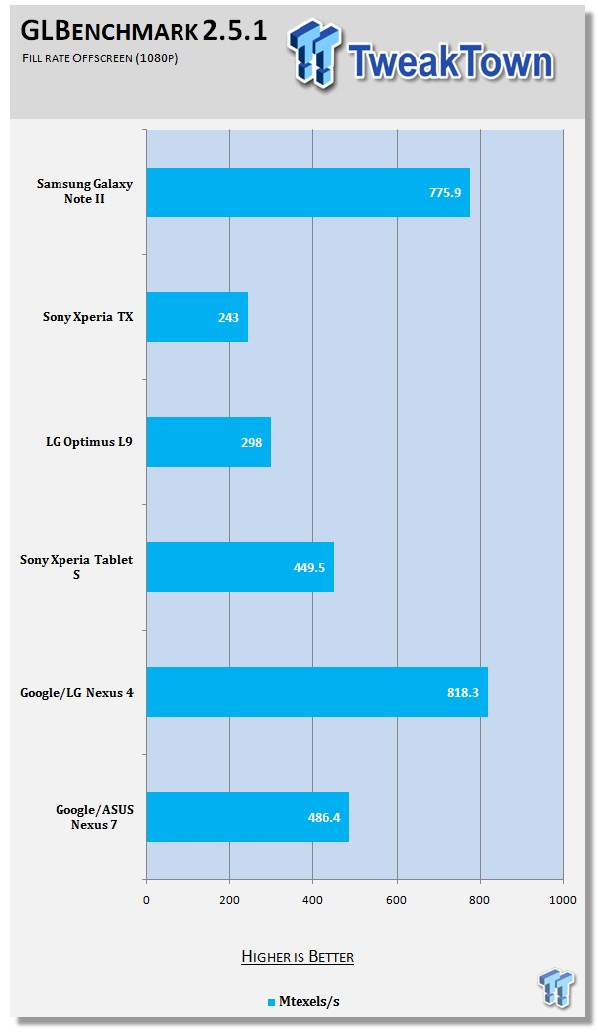 We can see here the Note II winning against everything but one device - that damn $299 Nexus 4. It smashes the other devices completely - but with most of them being mid-range devices, this isn't a hard job for the Note II. 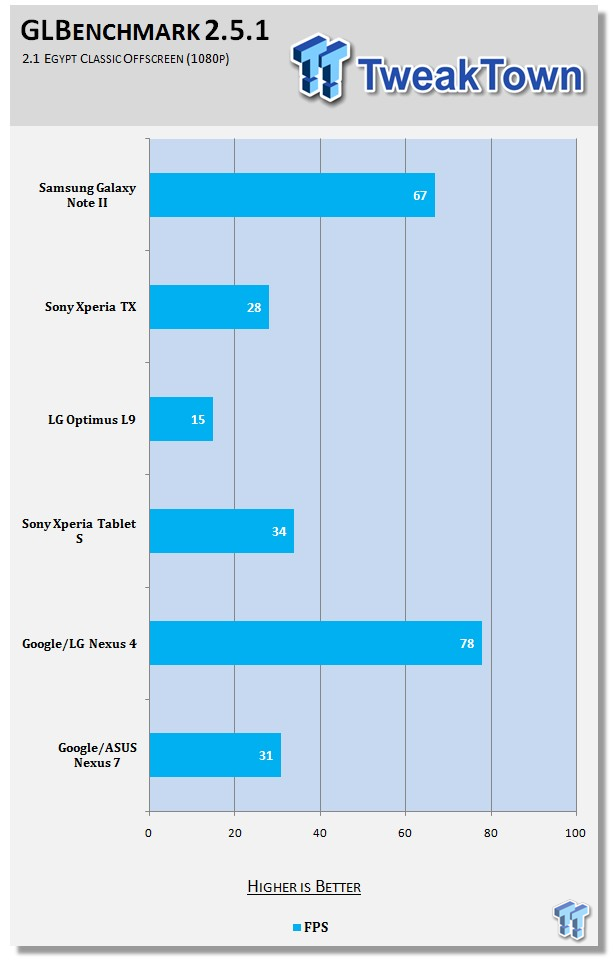 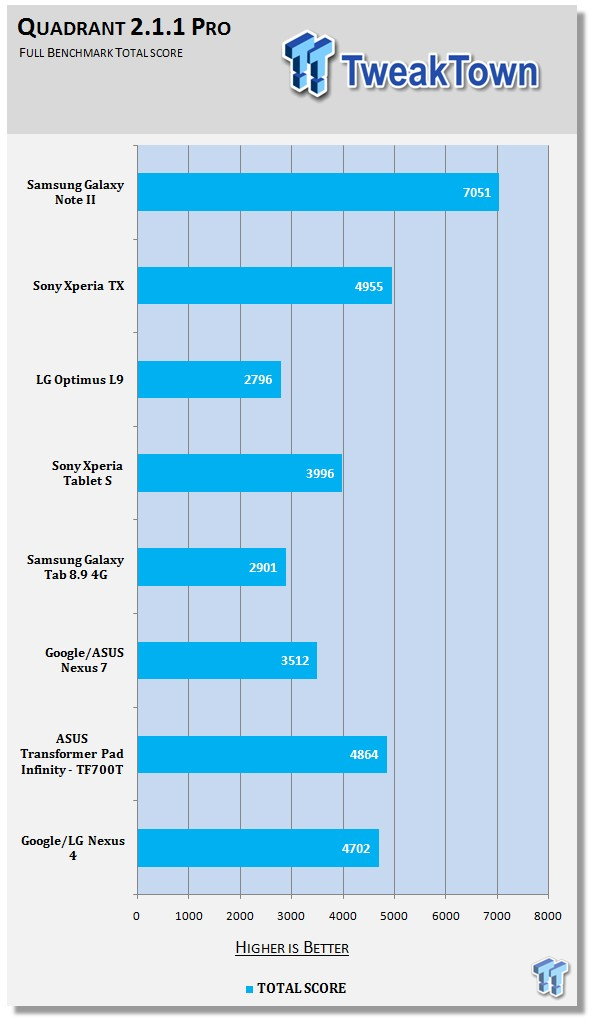 The Note II leaps out to smash at least one of the benchmarks and take the crown - Quadrant 2.1.1 Pro's full benchmark total score sees the Note II with 7,051. The usual rival, the Nexus 4, scores just 4,702 in the same benchmark. 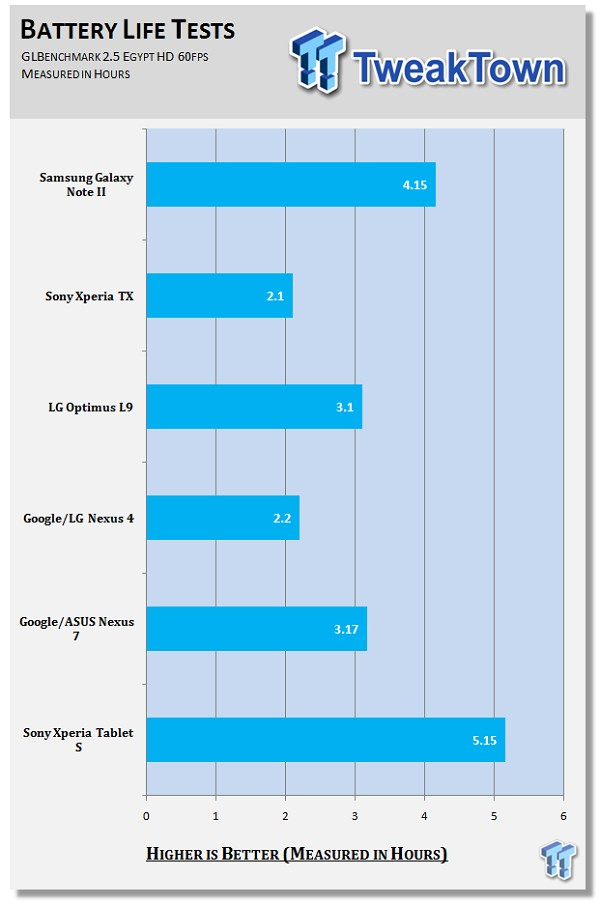 Samsung's Galaxy Note II has a 3,100mAh battery, which helped it score an impressive 4.15 hours in our battery life tests. The Nexus 4 scores just 2.2 hours under the same tests, which goes to show you the difference in the bigger phone (which allows a bigger battery), and how long it will last during a hectic day of use.

I came from the Sony Xperia Z review directly to the Note II and expected the transition to be better, for Samsung, but it's not. Sure, it's a great phone, but it has a specific audience. Those who want something bigger than the 4-something-inch smartphones we have now, and those who would actually use the S Pen.

Then there are the elderly or those with bad eyesight, the Note II is a great fit and Samsung have some great text enlargement options for these users. But is it enough for the average user to upgrade from, let's say, their Galaxy S II (not III) or their iPhone 4/4S (not 5)?

Yes and no. Again, you'd have to fall into that category of either wanting the bigger screen, and not minding that it can, at times, feel awkward because of its size - or, you want to use the stylus pen here and there on the Note II.

This doesn't make the Note II a bad phone, because it's not, it's just that Samsung have so many devices that are close to the Note II now - that you're going to have to buy one based on pretty much a specific feature. There's the Galaxy S III, S4, the upcoming Galaxy Mega (in 5.8-inch and 6.3-inch flavors) and the countless other devices in the Galaxy range of smartphones. 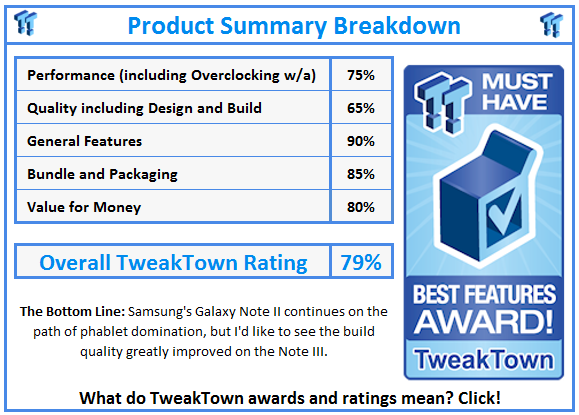