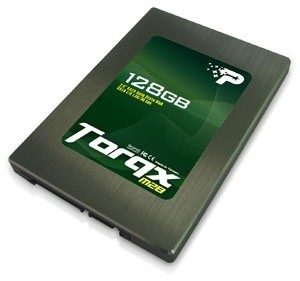 
Patriot has been on the charge with their SSD line-up. It started out when they entered the market with the Warp Series and now we are on the second version of the Torqx drive. Patriot has even launched their first Apple specific model, the KOI.

The Torqx M28 is a different breed from the Torqx we tested back in June. The first Torqx product used the Indilinx Barefoot controller with 64MB of cache. The latest version, the M28 has 128MB of cache and uses a Samsung controller. This isn't the first time we have tested a drive with the Samsung chip, the Kingston V+ Series, Corsair P256 and P64 drives that we tested in RAID also use the same controller.

One of the best features of this controller is its ability to keep track of deleted files in the hardware, on the drive itself. At this time the Samsung drives are the only available to do this and it makes routine maintenance non-existent since the drive handles garbage collection for you. It should also be noted that this automatic cleanup works in RAID arrays as well, an area where the Barefoot is still having trouble even with their wiper.exe software program.

Let's take a look at the specifications and get to the benchmarks from this drive on our new storage product test system. 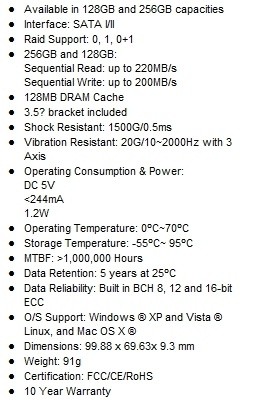 The Patriot Torqx M28 is available in 128 and 256GB capacities, both using the same Samsung controller and 128MB cache for stutter free operation. As I mentioned in the introduction, the Samsung controller has some pretty unique features when it comes to self-healing the drive in hardware. When we tested two of the Corsair P64 drives in RAID 0 we achieved some pretty good results and went into detail about the self-healing feature. The Patriot Torqx M28, when placed in a RAID array will achieve even better performance results since the 128GB and 256GB drives have even higher specifications.

I hate to say it but pricing still plays a large role in which SSD consumers purchase. Currently Newegg has the 256GB M28 for 679.00 USD and the 128GB drive for 345.00 USD. Today we will be testing and making the 128GB drive our primary focus. Newegg shows twenty-two 128GB solid state drives and once you remove the JMicron and PATA drives the M28 comes in second as far as lowest cost. This sounds really good and in some ways it is, but number one at this time is still the G.Skill Falcon like the one we reviewed in May, an Indilinx Barefoot controlled drive. We will go into the benefits of each controller in the conclusion.

Patriot recognizes that enthusiasts are taking advantage of the speed of SSDs and using them in desktop systems. Because of this they are including a bracket that allows you to install the 2.5" form factor drive into a 3.5" form factor bay.

One area that stands out in the specifications sheet on the M28 is the warranty. Patriot now has a 10 year warranty on their M28 class drives. When it really comes down to it you will most likely not be using this drive in ten years from now, but it is reassuring that Patriot is going to support this model for a very long time. 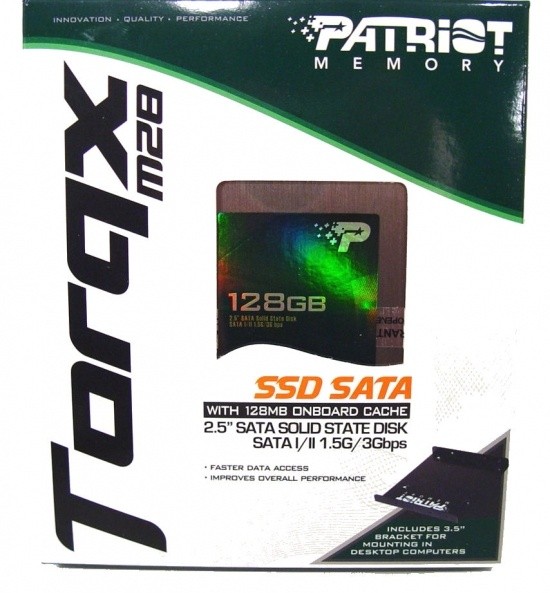 Patriot has their drives in retail and online shops and uses a full retail package for the M28. 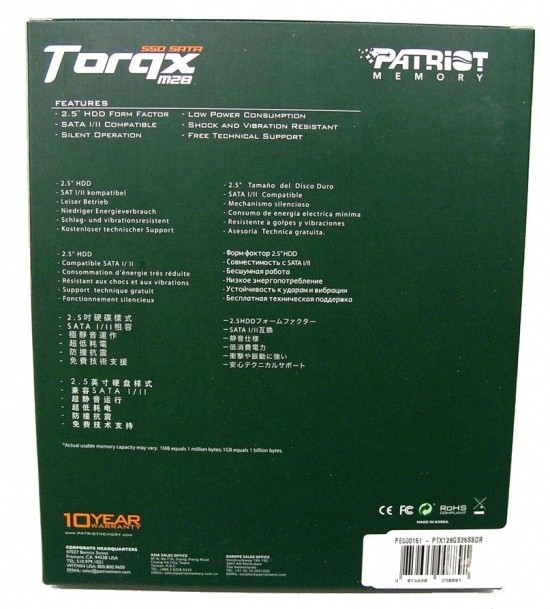 The specifications are listed on the back of the package. 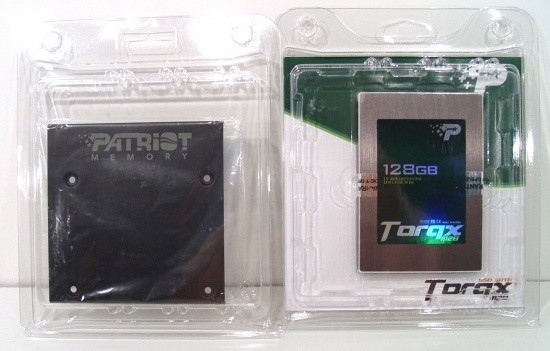 Once we removed the outer package we found that the drive and bracket were packaged separately. 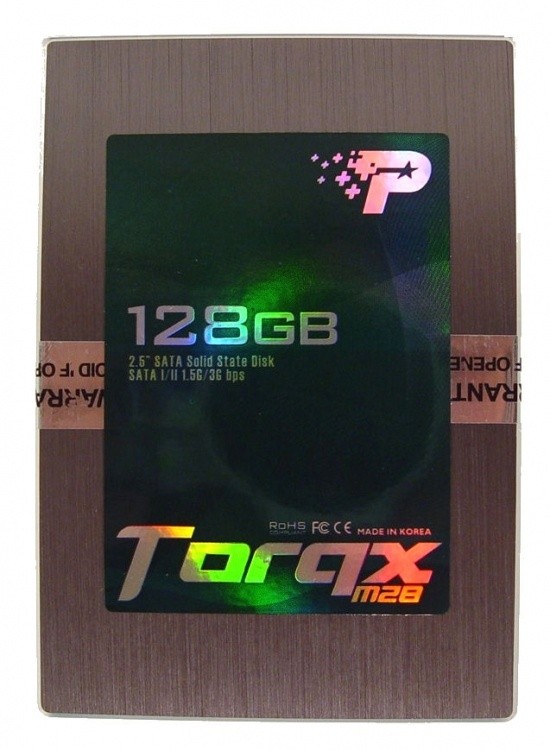 Here we get our first look at the drive. Patriot has used a holographic image for the label and it is clearly marked with the model name and capacity information. 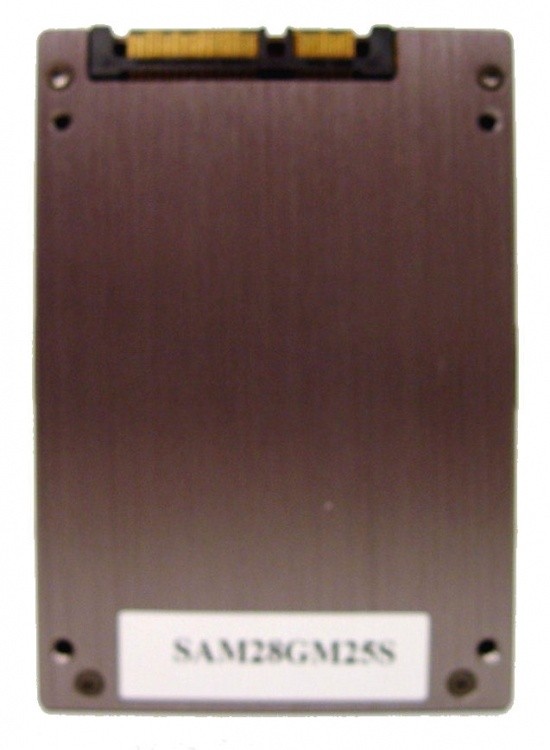 The drive case is made of aluminum and you can clearly see on the back the aluminum cover. The serial number is also located on the back of the drive.

The Torqx has the mounting holes where they should be on the side.

The SATA data and power ports are also where they should be. 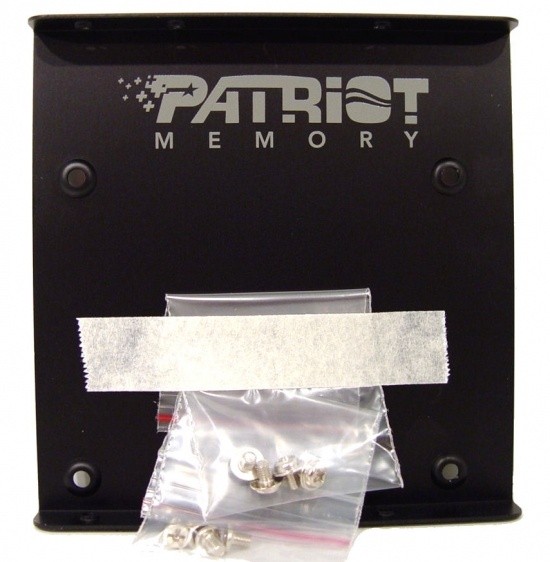 The bracket is also made of light weight aluminum and when the drive is installed the data and power ports are right where they are supposed to be. Patriot also includes the mounting screws in the M28 package. 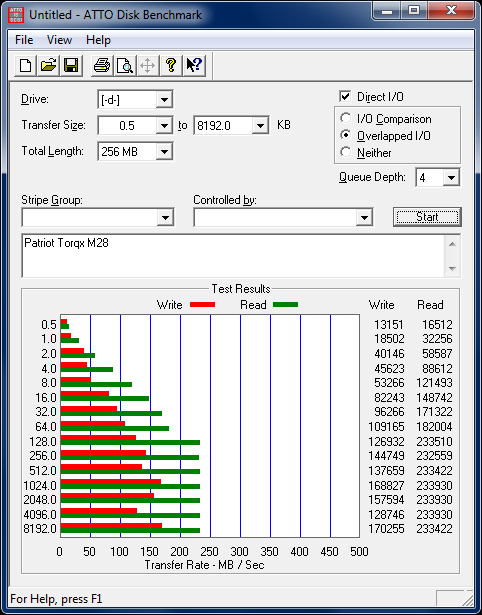 In ATTO we see the extreme read speed of the Patriot Torqx M28. The write speeds aren't too bad either, but fall a little short of the claimed 200 MB/s. 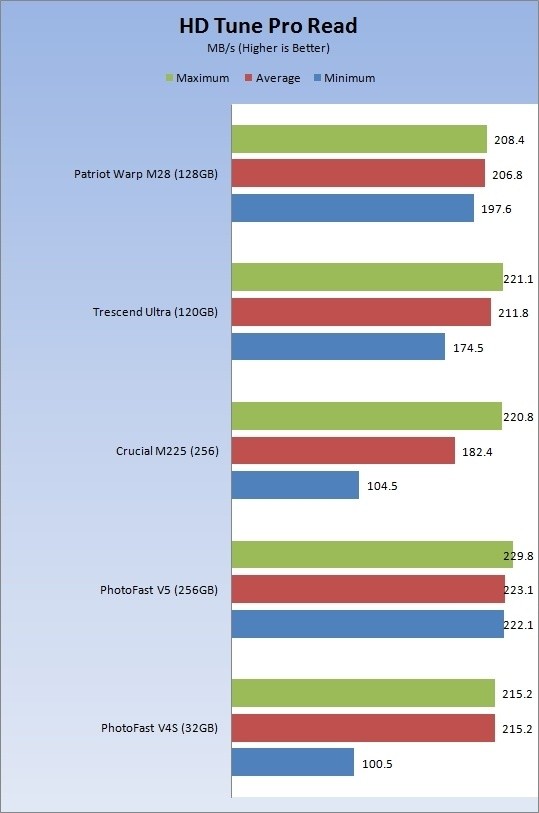 The Samsung controller found in the Patriot Torqx M28 does a really good job in keeping the reads level and as you can see here the drive performs very well across the entire range. 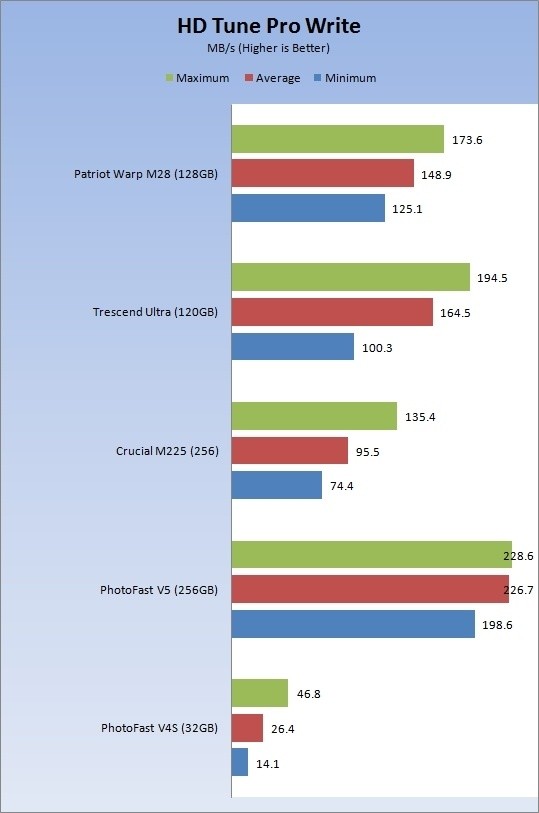 The STR write speed is a little bumpy but the lowest dips are few and far between. The M28 has an average write speed of just under 150MB/s which is very fast for a product in this price range. 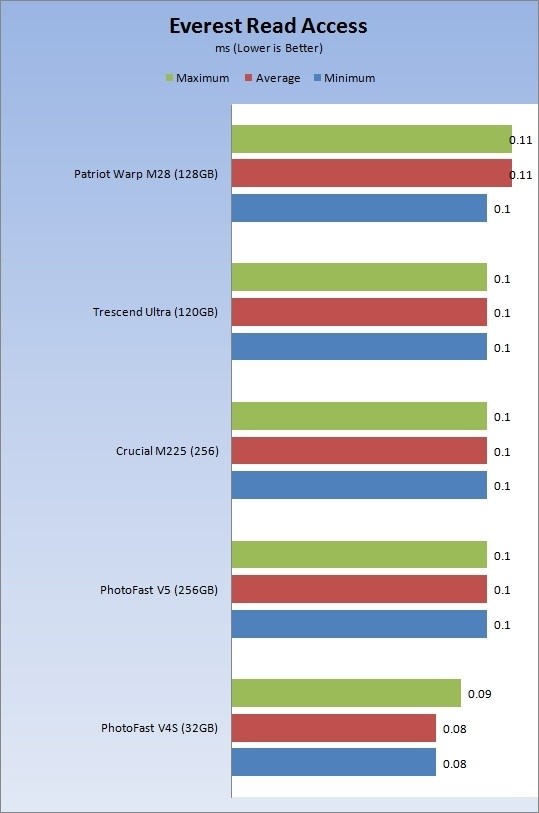 The Patriot Torqx M28 is able to access data just as fast as the Barefoot drives and is right where we have seen the other Samsung based drives. 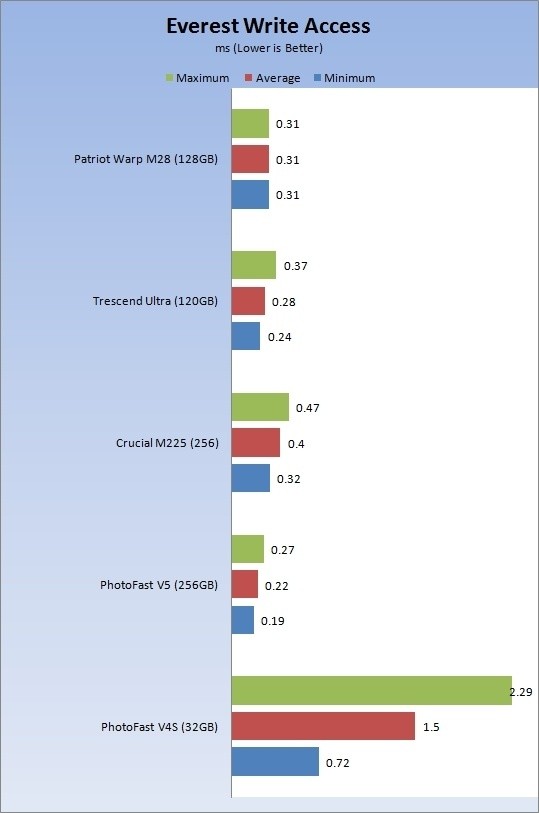 Write access times are not all that impressive but well under the numbers of traditional platter based drives.

I always enjoy looking at benchmark results and seeing where the manufacturers optimize a particular drive for. Here we see the Patriot Torqx does a really good job in the Photo Gallery test. The Barefoot controlled drives do a really good job in the Media Center and Movie Maker tests. I think the cache size, 128MB, twice that of the Barefoot drives is what makes the M28 do so well in Photo Gallery. 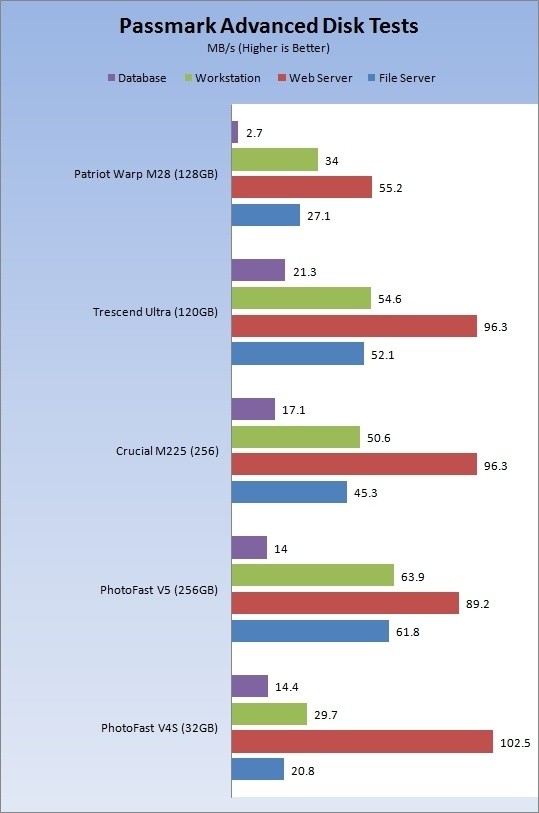 The Patriot Torqx M28 is designed for use in notebooks and desktops. Here we see that the drive has poor performance when compared to other SSDs, but it is still faster than the fastest traditional platter drive.

The cost per gigabyte for solid state drives has a very wide range these days. The two PhotoFast drives that were included in the benchmark results both cost close to 1000 USD and the Crucial M225 is around the 500 Dollar mark. The Patriot Torqx M28 with 128GB of capacity is only 345 USD at Newegg and it was able to compete with these higher cost drives in many of the important desktop tests.

I still can't believe that the companies selling drives with the Samsung chipset are not making a bigger deal about the self-healing feature. If you are a Vista or XP user this is the only way you are going to get automatic disk cleanup from a solid state drive. The only reason that I can see for these manufacturers to not mention it is because it will bring TRIM into question. TRIM is only found in Windows 7 and the Samsung controller as of now does not support the command being issued by the OS. Still, with the drive handling the clean up on its own I don't see much of a need at this time.

The Patriot Torqx M28 is not the fastest SSD on the market but its low cost more than makes up for its slight decrease in speed. To be honest, when it comes down to it when the drive is in your system, be it a notebook or desktop computer, you are not going to notice the difference between moving data at 200 MB/s and 250 MB/s. It is going to feel the same since you are most likely coming from a platter drive that was only kicking data around at 100 MB/s or less. It really comes down to experience and if there was an experience vs. cost benchmark the Patriot Torqx M28 would be at the top of the charts.