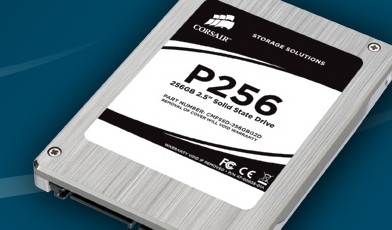 It was quite a shock when Corsair announced their entry into the solid state market. Just weeks before the announcement a Corsair representative stated that the company was not looking to enter the market until they were ready. At that point just about everyone took the news at face value and pretty much planned to revisit the situation a year or so later. It is strange how fast things turn around; Corsair has now released a couple of solid state drives and done it so quietly that few even noticed.

Memory companies branching out into other markets is nothing new, even Corsair who is known and pretty much defined by their memory products has released a successful line of power supplies and most recently enthusiast cases. To date just about every major memory company has added a solid state division and several SSDs in their portfolio. While Corsair may have been reluctant to join the party they are now getting down on the dance floor and are holding the hand of one of the best SSD chipsets on the market.

So far most of the other memory companies have chosen to team with Intel, JMicron and more recently Indilinx for their SSD products. Corsair, the company that brought us the innovative Dominator memory products once again chose to do something different. The Corsair P256 uses a Samsung S3C29RBB01-YK40 chipset, a second generation chipset that should approach performance levels of the fastest Indilinx and consumer Intel products. The latest Samsung chipset allowed Corsair to use 128MB of cache, twice that of the early Indilinx drives that we have tested.

As always the cost of an SSD plays a big portion in its success in the retail market. The Corsair P256 costs less than the Intel X25-M when comparing cost per gigabyte. Let's see how all of this breaks down. 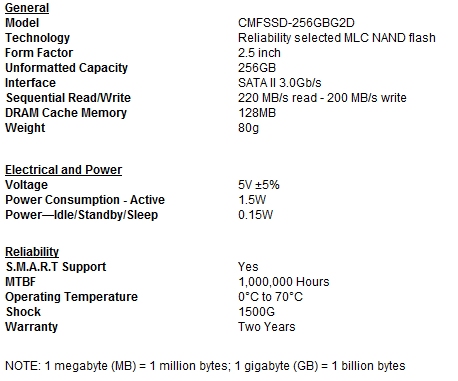 Corsair is currently selling four solid state drives, the M64, S128, P128 and the drive that we are reviewing today, the P256. The P256 comes with a standard two year warranty and is the same size as a standard 2.5 inch notebook drive.

Corsair has chosen to use multilevel cell (MLC) NAND Flash Memory to keep the cost of the drive low. At the time of writing Newegg lists the Corsair P256 for 659.00 USD. This is quite a bit lower than the 256GB RunCore MLC Pro IV that we reviewed back in May and is even less than the Intel X25-M when comparing the cost per gigabyte of storage. The Intel drives are only available in capacities of up to 160GB so the Corsair P256 is in another class all together with its nearly 100GB of extra storage. The 128GB P128 is also listed at Newegg for 345.00, the same price as the Kingston SSDNow 80GB M-Series drive.

Performance wise Corsair is stating that the P128 and P256 are capable of read speeds of 220MB/s and write speeds of 200MB/s. That makes the Corsair Performance drives some of the fastest on the market, numbers that we hope to see in our review here today. 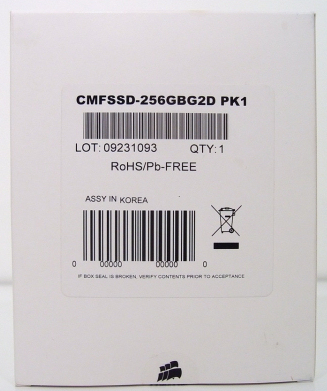 Corsair isn't looking to put the new P256 SSD on the retail shelves at Fry's Electronics so they have chosen to go with white box packaging. 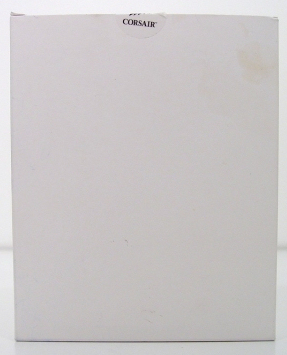 There is not a lot of info on the package; the back side is completely blank. 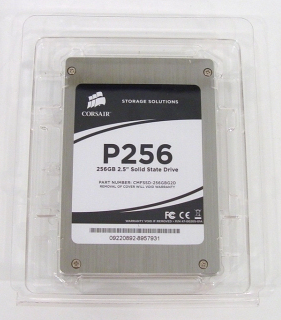 The drive is held securely in a clamshell plastic package that does a good job protecting the drive during shipping. 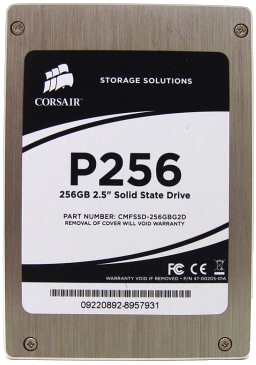 Here is our first real look at the Corsair P256 performance SSD. As you can see the outer shell is brushed aluminum and Corsair has their product sticker on the front. 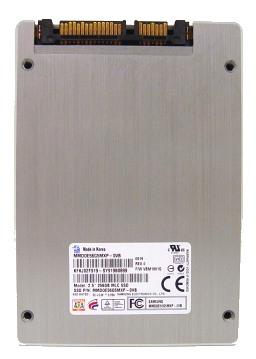 The back of the drive has the Samsung product ID and serial information.

On the side we found the proper mounting holes so installing the drive will be quite easy in your notebook or 2.5 to 3.5 inch bracket.

The power and data connectors are in the correct place also.


Today we are comparing the Corsair P256 MLC based SSD to other 2.5 inch drives that we've reviewed in the past. 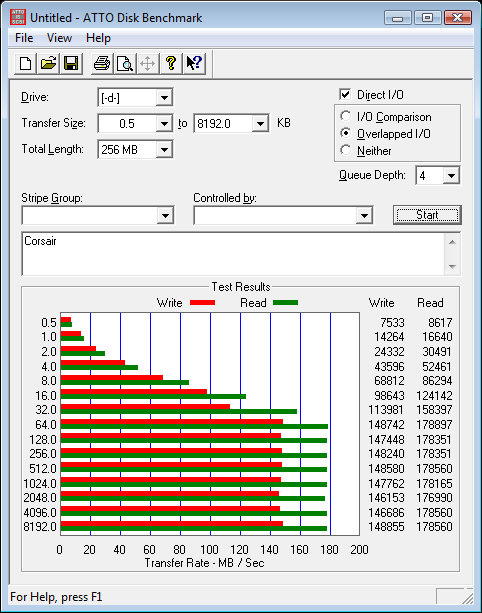 Here we see that under ideal conditions the P256 is capable of hitting nearly 180MB/s read and 150 MB/s write speeds in our test system. 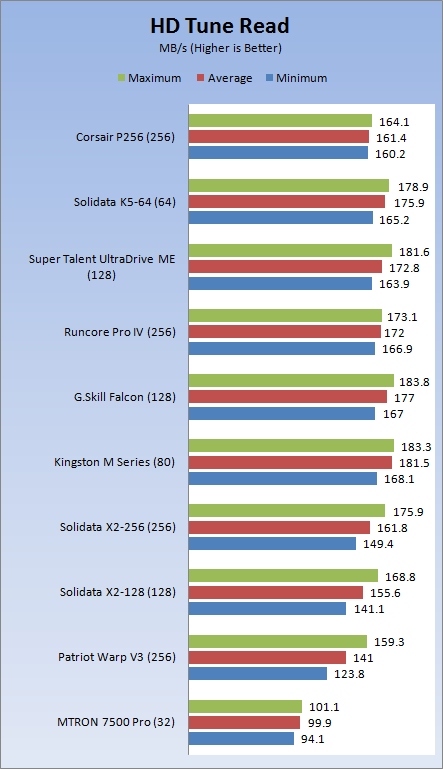 Our synthetic read test shows that the Corsair P256 runs just a tad slower than the Indilinx controlled drives, but faster than the JMicron drives. 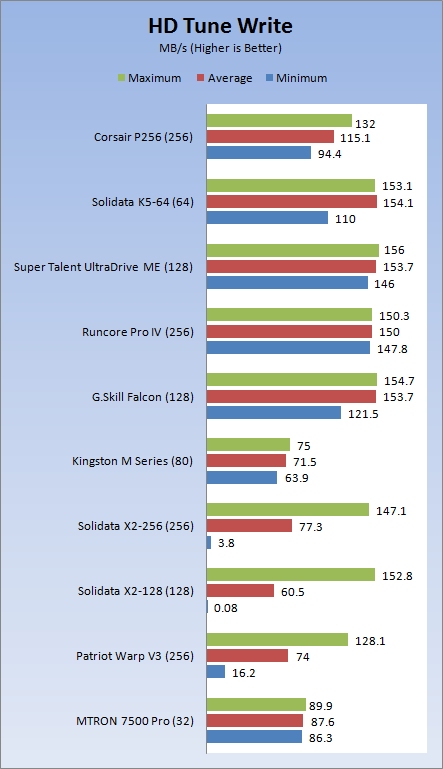 The synthetic write tests have the P256 moving data faster than the Kingston/Intel X25-M, but a little slower than the Indilinx drives from Solidata, Runcore, G.Skill and Super Talent. 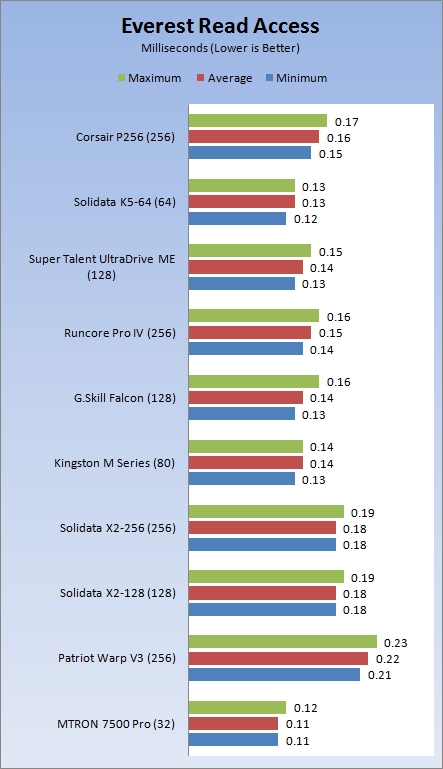 The average read access times of the Corsair P256 shows that the drive takes a little longer to retrieve data than the Kingston/Intel and Indilinx drives. 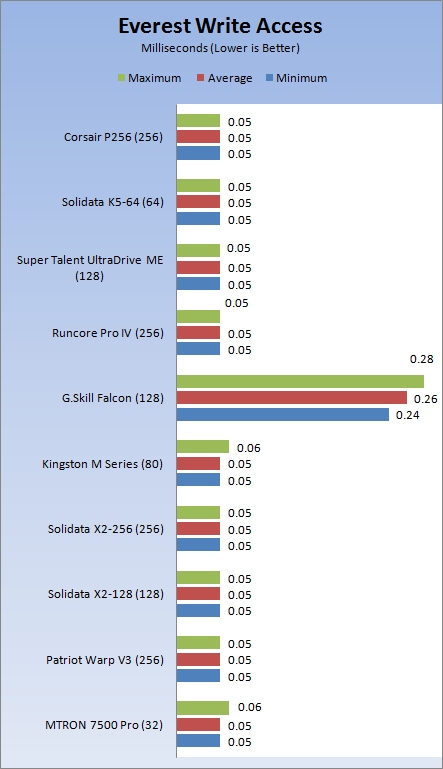 The write access times are much better; here we see the P256 running right with the herd of other SSDs.

In the past we have seen the Intel X25-M and Indilinx MLC drives go back and forth in the Windows tests. The same holds true with the Samsung based Corsair P256. These tests are very interesting and show that the Corsair is faster than both the Indilinx and Intel controlled drives in some tests, but in other tests the drive is only slightly slower. 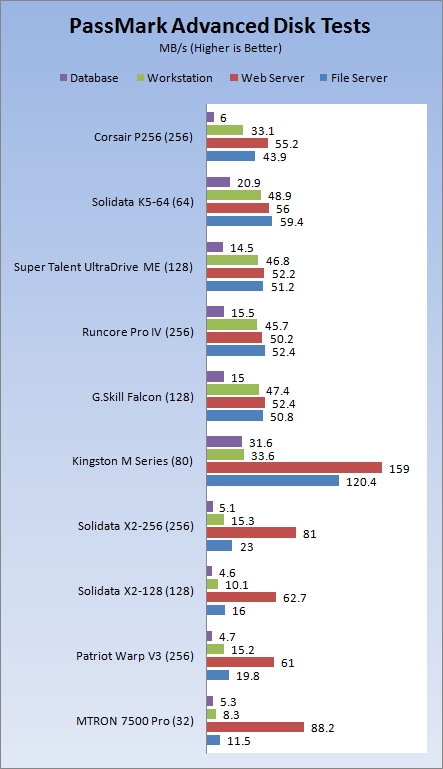 The server tests show that the Samsung controller paired with MLC memory is not the best combination when lots of reads are needed. The workstation tests also show that the P256 is slower than the best Indilinx drives. The bad thing is that the drive is very fast but the competition is faster, in some cases much faster.

The 256GB capacity market in the US isn't nearly as saturated as the 128GB arena. If you are looking for a large capacity SSD you have a few options, the Intel 160GB drive that currently sells for 619, the G.Skill Falcon 256GB at 589 and the Corsair P256 at 659 (all Newegg prices at the time of writing). These drives represent different chipsets and are the best bang for the buck in their categories. Even now I have mixed feelings about the Corsair P256. On one hand the performance is very good but lags behind the others in some areas. The overall cost is also quite high, but when looking at the cost per gigabyte of storage the number is much lower than the Intel drives.

The part that I have yet to talk about is longevity. I am still using a set of Samsung SSDs in RAID 0 in one of my computers and have yet to have a problem with the array. Samsung does a very good job testing and perfecting their solid state products before their launch and I have yet to see a page dedicated to firmware updates like we are seeing from the Indilinx drives. Out of the ten or so Indilinx drives that have been tested in this lab, two have failed; one with a month's worth of work on it. Nothing decreases confidence like having a drive fail that is being used for critical tasks. That said, I have full confidence in the Corsair P256 and its ability to not flake out when I am depending on it.

When it comes to real world use I doubt that a consumer would ever tell the difference between the Intel, Indilinx and Corsair drives other than the capacity differences. Testing shows that the Intel controller is still the best product for server and workstation loads and in some cases by a large margin, but Corsair isn't positioning the P256 to play in that arena. For the user it is really going to come down to capacity; is 160GB enough or is 256GB the magic number? Personally I keep a lot of data on my notebook and would choose higher capacity with nearly identical performance. The cost per gigabyte would dictate my buying decision. That stated, Dollar for Dollar the Corsair P256 would be in my notebook. 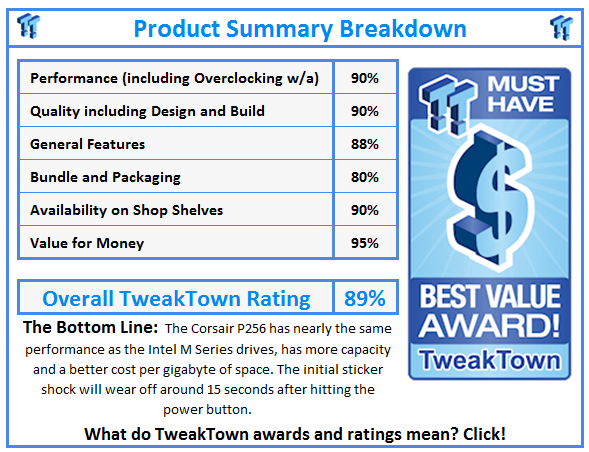