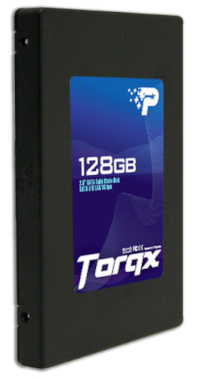 Patriot had a very successful run with the Warp Series drives, some of the most sought after JMicron based products that routinely outperformed products from competing SSD manufacturers. In order to distinguish the JMicron drives from the new Indilinx controlled drives, Patriot needed to let go of the Warp product name. The first press release announced the new drive as the Fusion, but in a last minute decision the name was changed to Torqx.

While other companies were rushing to get media and e-tailers their Indilinx SSDs, Patriot was scrambling to get the new packaging ready and the Torqx drives had to sit in a warehouse. With everything finally lining up correctly Patriot is now on a mission to show that with patience comes a superior product. For starters, Patriot was able to update their drives with the latest firmware for the Indilinx Barefoot controller, something that hurt the performance numbers of the G.Skill Falcon when we reviewed it last month. Patriot was also able to react to what enthusiasts were asking for from SSD manufacturers, a way to mount 2.5 inch SSDs into 3.5 inch drive bays.

Today we are going to put the new Patriot Torqx up against other manufacturers SSDs from both the consumer and enterprise markets. How will the Torqx compare? Let's find out. 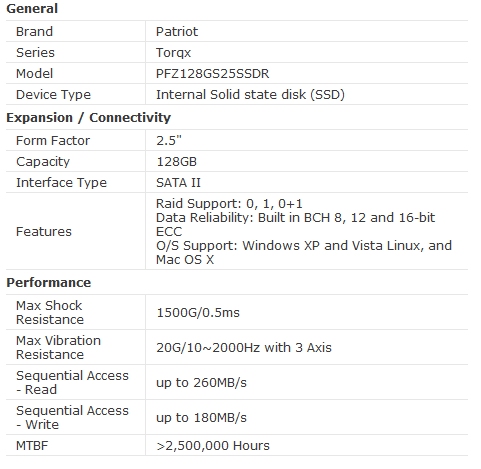 On the surface the Torqx looks like just another Indilinx Barefoot controlled drive, but after looking at the other spec sheets we see that Patriot is claiming an additional 10 MB/s read speeds over what we have seen so far. Certainly Patriot has the advantage of time with the Torqx and was able to load the drive with newer firmware.

Another item that gives Patriot a heads up on the other Barefoot drives is the accessory package. Patriot included an adapter so you can install the 2.5 inch Torqx into a 3.5 inch drive bay. It might not be much, but in the cut throat world of consumer SSDs this may be what many consumers need to make a purchasing decision.

More than likely price will still play a large role into which drive you purchase. Newegg currently sells the 128GB Torqx that we are reviewing today for 399.99 USD with free shipping. Newegg also shows the 64GB Torqx in stock for 218.89, but the 256GB heavyweight drive is currently not listed. After a quick search at the massive e-tailer it became clear that the Torqx is the highest cost 128GB SSD. Of the latest round of extremely fast Barefoot controlled drives the G.Skill Falcon 128GB drive lists for 325.00 USD, but the Falcon does not come with the adapter that makes installation in a desktop easy.

The specifications list does not show the 64 MB of cache that is built into the Torqx drive. I feel that this information shouldn't slide by unnoticed. The cache allows the drive to write data at close to double the speed of the Intel X25-M. Let's get a closer look at the Patriot Torqx. 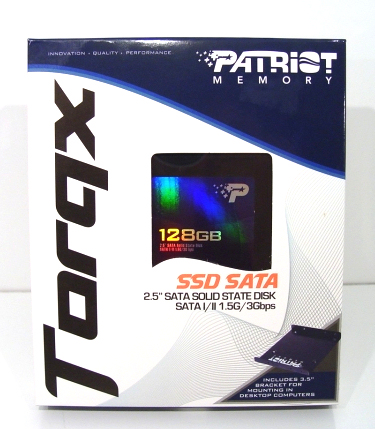 Patriot has always had nice looking packaging for their SSDs and the Torqx keeps with the same tradition. Here we see that Patriot has also done a very good job informing the consumer about the inclusion of the adapter bracket. 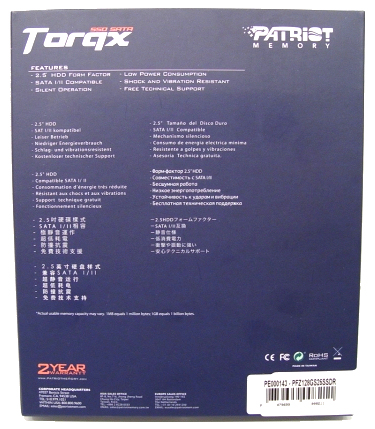 On the back of the package we see that Patriot was able to give a general features list, but omits performance information. 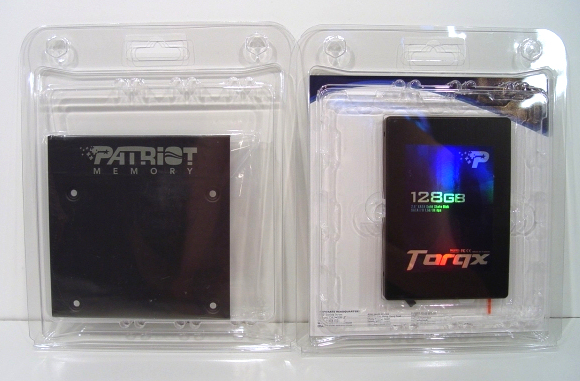 Also keeping with tradition Patriot has done a good job keeping the drive secure in the package. Here you can also see that the adapter and accessories are packaged separately from the drive. 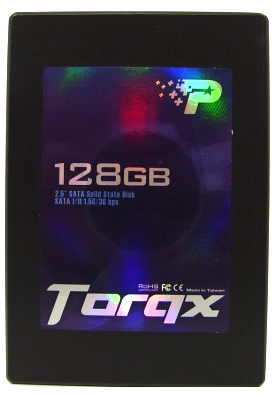 The Torqx has a holographic foil label on the front of the drive. 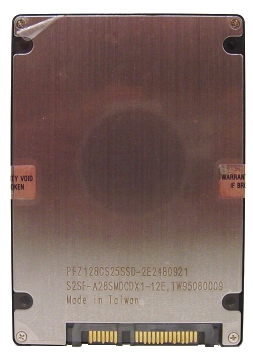 The back of the drive has the serial and part number laser etched in the aluminum casing. 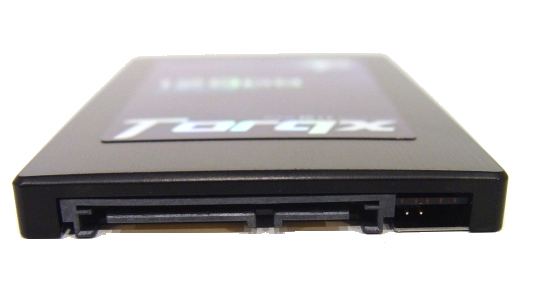 Patriot has given the end user the ability to update the firmware on the Torqx (via a jumper that is exposed). After reviewing my fair share of Barefoot controlled drives it looks like only a few companies have made it possible to do this. In the long run you may be able to squeeze a little more performance out of the drive once more updates become available.

On the side we see that all of the standard mounting points are present so you will not have a problem mounting the Torqx. 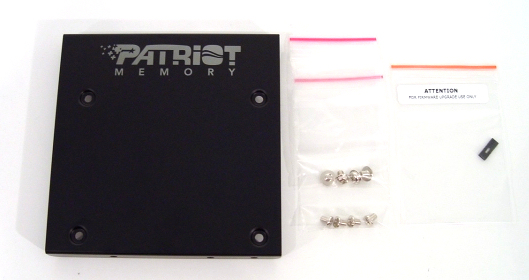 Here we see the adapter, included screws to mount the drive into the adapter and the jumper for firmware upgrades.

Today we are comparing the Patriot Torqx SSD to other 2.5 inch drives that we've reviewed in the past.

ATTO is used by many disk manufacturers to determine the read and write speeds that will be presented to customers. We use these numbers to observe the drive under ideal conditions. 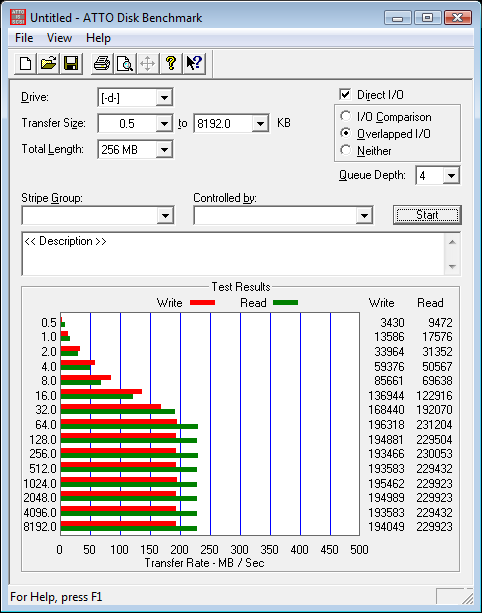 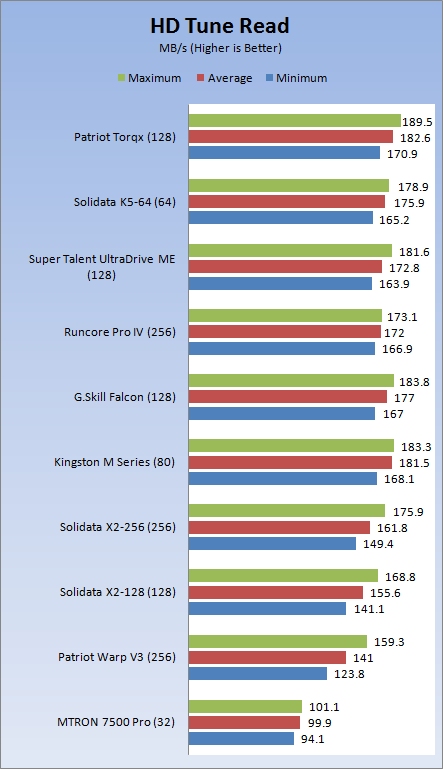 In HD Tune we see that Patriot Torqx beating every other drive we have tested to date, including the Solidata K5 SLC Barefoot drive that costs nearly twice that of the Torqx and has half of the data capacity. 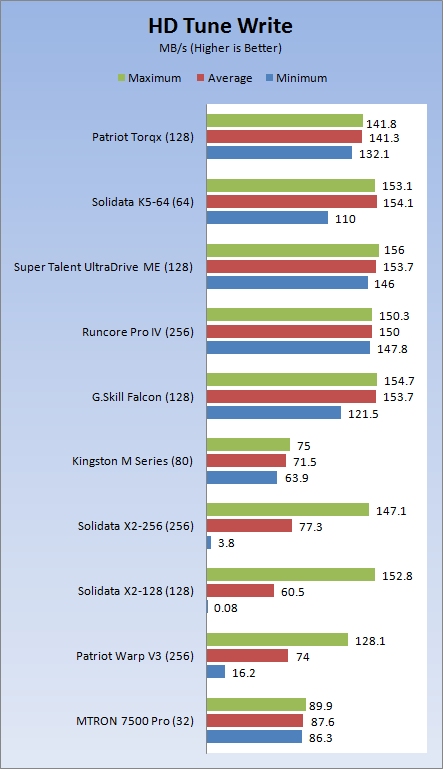 The write test shows the Torqx the slowest of the Barefoot drives by a small margin. More interesting is the speed difference between the Patriot Torqx and the Patriot Warp V3. 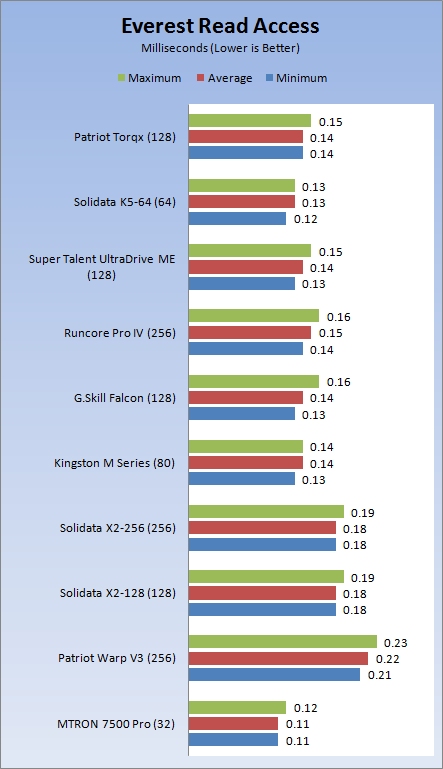 The average read access times of the Torqx shows that the drive runs nearly parallel with the other Barefoot drives. 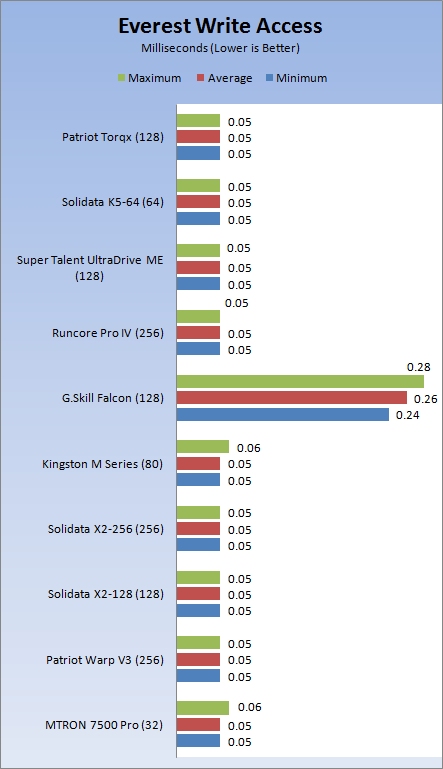 The write access times are spot on with the rest of the Barefoot drives as well.

Other than the SLC flash Solidata K5, the Torqx runs pretty much the same numbers as the other Barefoot drives. We also see that the Torqx is able to outperform the Intel/Kingston X25-M in some of the tests. 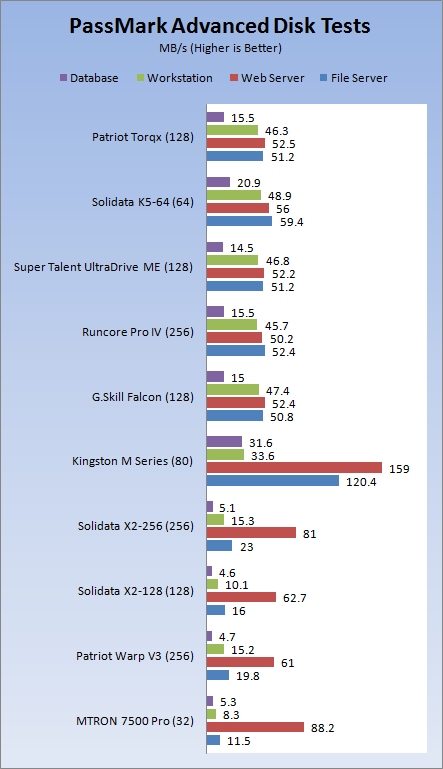 The workstation and server tests show the Torqx as a very fast drive and it even outperforms the Intel/Kingston X25-M in the workstation category that resembles the patterns most used in desktop environments.

Patriot has always impressed us with their solid state drive offerings and the Torqx is no exception. The synthetic benchmarks show that the Torqx has a lot of potential even though the real world numbers only show the drive performing with the pack of other Indilinx Barefoot controlled drives. Patriot has left the door open to future performance increases or even optimizations for particular tasks, something that most of the companies neglected to include.

Enthusiasts have started moving to SSDs in droves for their desktop and workstations and rightly so since the performance increase can be felt within seconds of turning high performance systems on. Patriot has taken the steps to make the transition from a 3.5 inch drive to the 2.5 inch Torqx much easier. This shows that Patriot listens to what enthusiasts are saying on forums and what storage product reviewers are saying in their reviews.

Cost is always going to be a big factor when it comes time to actually purchase a product and this is where Patriot has fallen short. At 399 USD the Torqx has the highest off the shelf cost of the consumer Barefoot drives we have tested to date. Once you factor in the actual cost of ownership the margin is reduced with the other drives needing some form of adapter to fit in a majority of desktops, but with the G.Skill Falcon selling for only 325.00 USD some users may be swayed by the low cost and find an aftermarket adapter while keeping the true cost of ownership under that of the Torqx. Patriot was a little late to the party with this generation of drives so hopefully as time passes the e-tail cost will shrink as it normally does. 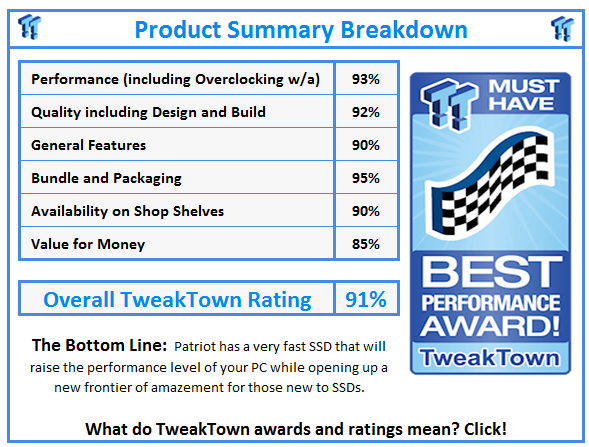