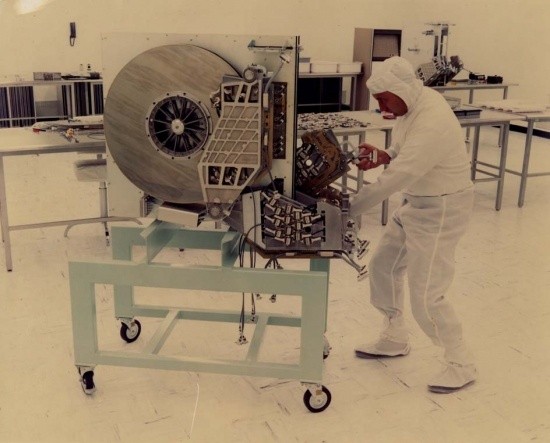 
There are many programs on the market to test hard drives. Personally I would love to use every single one of them in testing, but don't think I could keep you interested for 30 pages of benchmarks. In the past every hard drive was the same; you had cache, platter speed, platter density and interface, boom, bing, bam, run the tests write it up and call it a day.

Solid state drives (SSDs) are now on the market and just about everyone reading this either owns one or wants to own at least one. When a new SSD review is published the TweakTown servers kick into turbo mode and millions of readers come to get their fix. What most people don't realize is just how touchy these drives can be to test and how easily the tests results can be ruined. If you run a test out of order your results when compared to other drives can be skewed. Windows 7 makes testing even more difficult; in the past you could start testing, take off to get lunch and finish when you returned. With Windows 7 the trim command can take off and return the drive to near its new state invalidating your results for the remainder of the tests. Because of this a strict testing method must be used to keep the playing field level so it is possible to compare one drive to another.

Today we are going to walk through the testing procedure for storage here at TweakTown. There are a few categories that will be covered; SSDs, HDDs, RAID controllers, NAS servers and DAS servers. Since our previous AMD Opteron workstation was starting to run into performance issues with the latest round of ultra high performance SSDs, we have built a new workstation and want to thank a few of the companies responsible for helping to get the parts together.

Finding a suitable workstation to test the latest and greatest products might sound like an easy venture. Grab a motherboard, processor, RAM and get to work. Easy, right? - Our Tyan S2915-E that we tested with for over a year was a great solution, but when testing PhotoFast's V5 on it and an ASUS P6T Deluxe we found that the drive performed much faster on the P6T Deluxe, even though both systems used SATA 3 Gbit/s (second generation SATA). 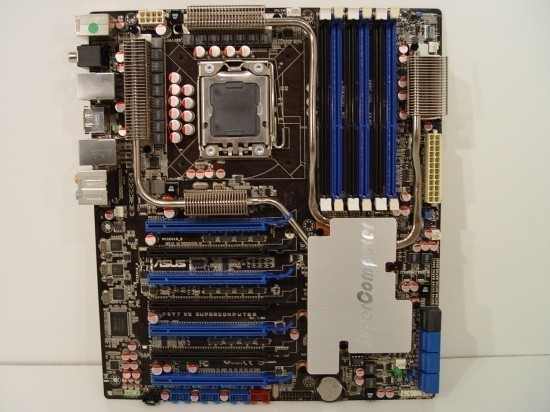 PCIe has taken over the storage industry. RAID controllers and even the famed Fusion-io ioDrive use it and you can't find a motherboard with more PCIe connections than the ASUS P6T7 WS SuperComputer. The P6T7 WS SuperComputer was designed from the ground up to deliver outstanding PCIe performance for personal supercomputers that utilize CUDA processors. Since we are looking for maximum PCIe performance the P6T7 WS was our first choice and it delivered with outstanding accuracy test after test.

ASUS has also worked very hard on their power saving features and their products are capable of very efficient ratings. More importantly for us, ASUS has made control of these features easily accessible and the user still has the option to disable these features when needed.

To sweeten the deal, the P6T7 WS SuperComputer has a built in SAS controller that will allow us to test SAS drives without running the data through a controller with cache.

The Intel Core i7 975 Extreme Edition

Products like the Fusion-io io-Drive and PhotoFast V5 are just two examples of drives that we observed benchmark performance scaling when tested on different processors. The 975 EE is the fastest processor on the market and will deliver the highest performance from the products we test.

On a normal day Intel would provide the processors that we use for testing, but when I started validating the ASUS P6T7 WS SuperComputer it was not a normal day. The processor that I had ready to use in the new system was treated like a Chinese throwing star by my team of future reviewers that frequent my computer room and are eligible by birth to get a pass. Core i7's are great processors, but they do not hold up to child ninjas. After a post on Facebook detailing my frustration, AVADirect owner Misha Troshin chimed in to let me know that he had a brand new retail box 975 Extreme Edition on the way.

AVADirect is a boutique builder that has an excellent customer service staff that showers their customers with industry leading support. One look in their forums and you will see that AVADirect is gaining in popularity and many of their customers are customers for life. When I frequent forums I am used to seeing complaints about shipping times, service issues and RMAs, but I have to admit that this company really surprised me.

AVADirect has a full line up of notebook, desktop, workstation and servers at industry leading prices and is equipped to handle both government and consumer orders in a timely manner. We look forward to working with AVADirect on many projects in the future.

LSI was the first to market with their SAS 2, 6 Gb\s RAID controller that doubles the performance of this two way serial interface. The 9260-8i will be used for all of our SAS and SATA drive RAID tests.

I started using Noctua heat sinks just a few weeks after they announced their first products. The NH-U12 quickly became my favorite CPU cooler when it was used passively on a pair of overclocked AMD Opteron processors that allowed me to break the 3DMark CPU World Record back in January 2006. I have used Noctua CPU coolers on every test system built since then. The Noctua NH-12P SE2 is a highly refined version of the original NH-U12 and is one of the best cooling and quietest heat sinks on the market.

As I mentioned earlier, solid state drives require a controlled environment for obtaining accurate test results. Giving apples to apples test results is the only way to rank a products true value when compared to other products it is competing with. Our ultimate goal is to keep the field level for all products and give you, the readers the information required to purchase the best product at the price point you are looking to purchase at.

To get started, install your drive into your machine and turn your system on. After the system has found your drive and you receive confirmation that the drive is installed, restart your system. This is an important step and if not completed the Everest Access Tests will not run properly.

Piece of cake, right? - Not exactly. Many of these tests have different user selectable variables that can change the results. Let's move on and see the exact settings used along with some video demos to make things clear.

If running the tests can influence the final results, imagine what using different settings can do.

By default HD Tune and HD Tune Pro are setup to quickly test a drive and not run a 100% accurate test. On two occasions I was able to identify a defective drive simply by running the accurate test. The default test passed over the affected memory block, but the test in full accurate mode identified the issue and reported an error. 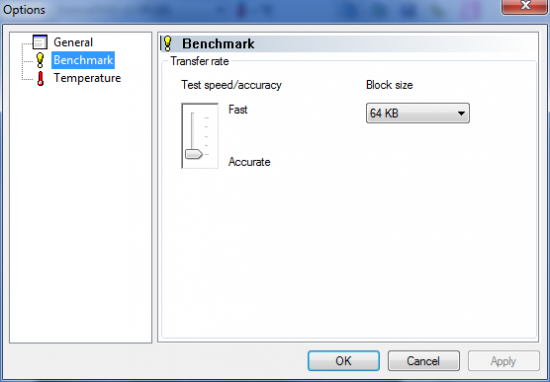 After you have verified that the software is configured properly you can start your testing. Here is a video that will walk you through the first four tests.

HD Tach doesn't have a whole lot of test options, but these are the settings that we use. 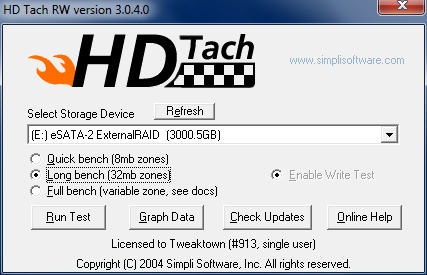 We use Everest for two tests; read and write access times. Everest is one of the few programs that will test access time down to the hundredth of a second; most only go to the tenth. The tests are easy to setup, but there is a catch. Some drives will not run the write access time test correctly without a partition. Also, if you do not do a restart cycle after installing a new drive, the drive names will not match what drive you are testing.

After your Everest Access Test it is time to partition the drive.

The ATTO benchmark is pretty straight forward and has been used for many years, although it can be difficult to locate. ATTO is actually a company who specializes in RAID controllers and they happened to make a pretty good benchmark that has survived the test of time. 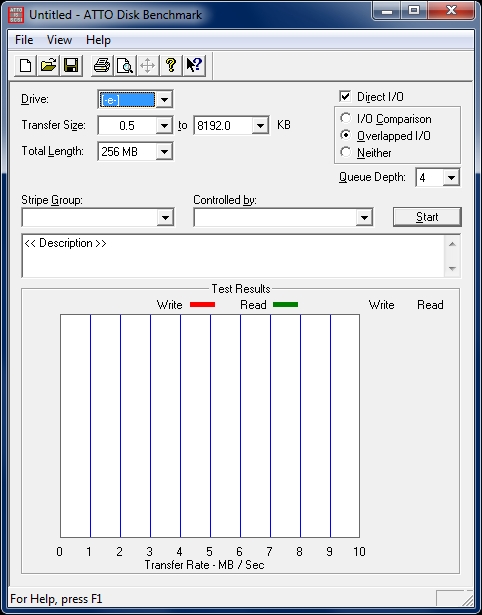 FutureMark has several industry leading benchmarks and PCMark is no exception. There are a couple of settings that will allow you to just run the tests we need to get the results we are after. 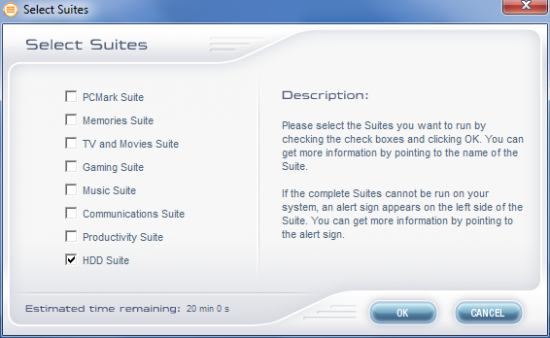 First go in and choose the HDD test only by deselecting the check boxes for the other tests. 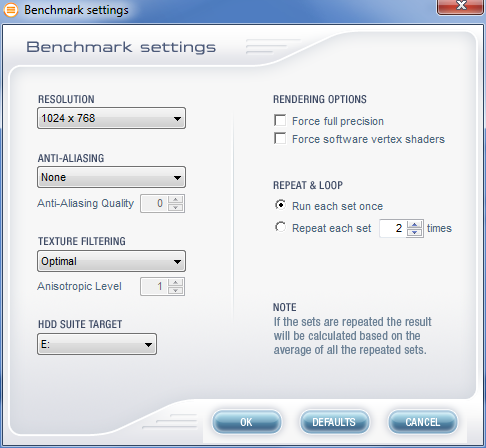 The next step is very important, select the drive that you plan to test.

I get more emails about this set of tests more than any other. We use four different tests in the PassMark suite for testing HDDs. We also change the default time for each test to 180 seconds.

Crystal Disk Mark Benchmark is wildly popular in Asia and we are now introducing it into our test suite. Personally I feel that the benchmark relies too much on a drives cache and will rarely comment on the results of the test. For me, running this test has a much more devious purpose when testing SSDs. Since SSDs can degrade in performance over usage until a form of "garbage collection" is run, this test will go a long way in finishing off the optimum performance a drive has.

Now that the drive has been thrashed it is time to wrap up the testing by going back to an unpartitioned state and retesting the write performance with HD Tune Pro's STR Write Test. This final test will show the drive at its worst performance. Windows 7 is the first Windows based operating system to support the TRIM command and with it your SSD will revert back to an optimal state on its own, but until the process is complete your drive could be running at these speeds.

This is an article that I have wanted to write for quite a while now and am glad it is now available to you as a reference. It is important to remember that this is a living document and as more tests are added to the suite we will add them to the document.

I would like to thank ASUS, AVADirect, Leadtek, Noctua and LSI for contributing the hardware that gives us the foundation to test storage products to their maximum performance levels.