When it comes to gaming hardware, software support is such a key part of the picture that if it falls short in the customization and tweaking department - or outright fails - then it can make an otherwise well-made bit of gear feel like a missed opportunity or outright disappointment.

Unfortunately, this is the case when it comes to the HyperX Cloud Mix Buds - a product that fills something of a gap in the gaming audio space on paper. Dedicated earbuds that also feature traditional 2.4 GHz wireless support on top of Bluetooth for true low latency audio and the bonus of being compatible with all manner of PC and console hardware. 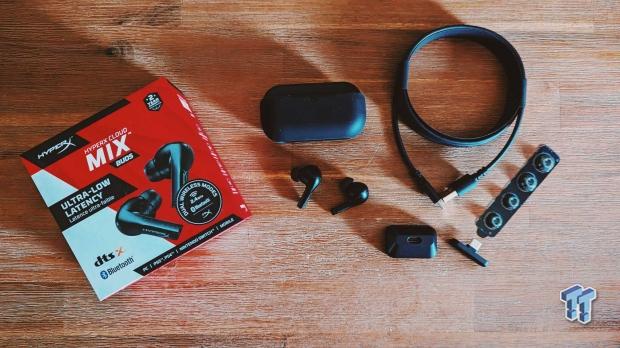 When it comes to gaming audio, the over-the-ear headset is king, queen, jack, the ace of spades, and pretty much all the other cards in the deck. Joker included. Traditional solutions with microphones to facilitate in-game chat and other digital social interaction. Audio of the in-ear earbud style is mostly relegated to the smartphone and athletic realm and is mostly Bluetooth only.

This makes sense when most wireless earbuds are being paired to smartphones, but because Bluetooth isn't all that great when it comes to latency, gaming with wireless earbuds is usually a no-no. Listening to music is fine, but when you get a very noticeable lag between input and the sound you hear, it immediately breaks immersion.

Truth be told, for many people, earbuds are more comfortable than over-the-ear headphones, and in terms of audio tech, more than capable of delivering a rich and full sound. Again, the HyperX Cloud Mix Buds fill a void thanks to the addition of a wireless dongle which adds a bit of plug-and-play action for PC and console audio. And the more traditional 2.4 GHz wireless seen in gaming audio gear.

At least that's the idea, which makes the just-about complete failure of the software side of this product a shame. In addition to this being a review, consider this a cautionary tale, a "what could have been". Let's dig into the HyperX Cloud Mix Buds story. 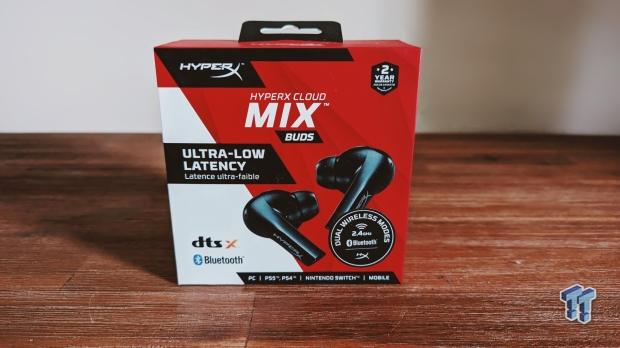 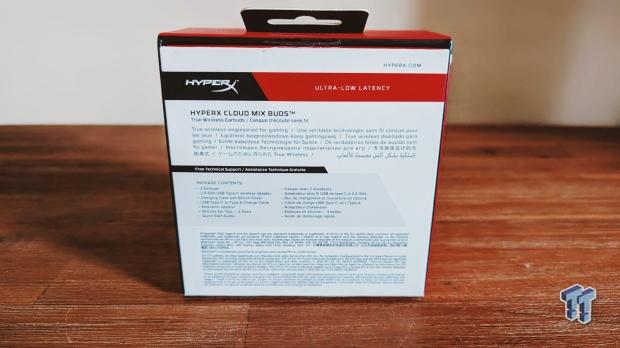 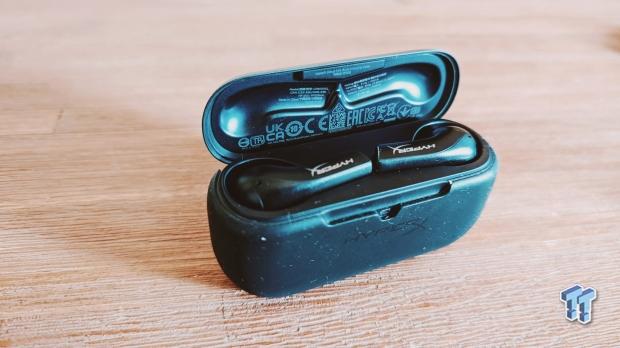 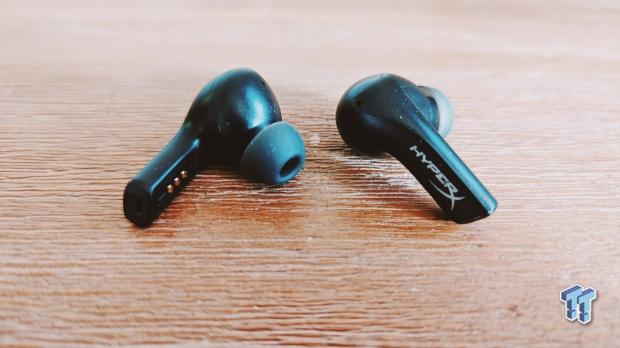 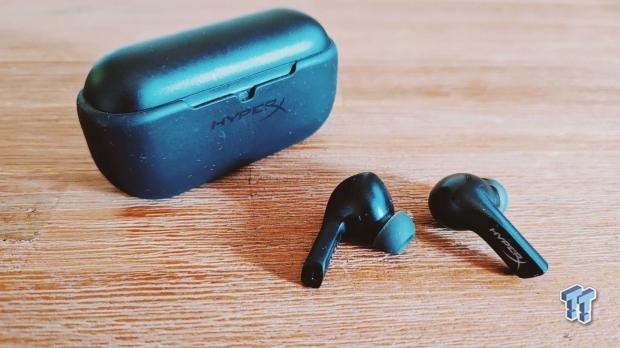 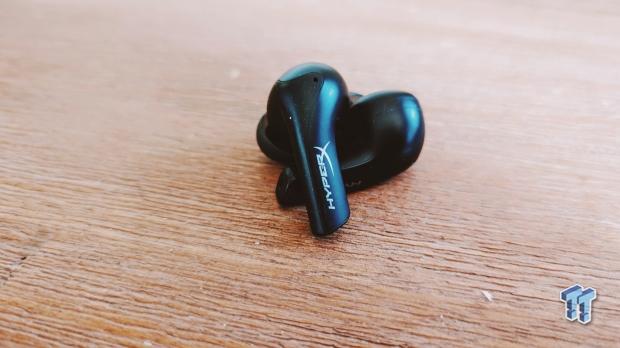 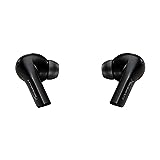 The physical design and configuration of the HyperX Cloud Mix Buds are certainly sound. You've got support for both 2.4 GHz low-latency wireless and Bluetooth versatility. And in terms of functionality, it can automatically detect which signal is trying to connect while pairing. Though there's no multi-stream functionality, it's one or the other.

A pair of gaming earbuds, plugging the dongle into a PlayStation 5 console and firing up God of War RagnarÜk, and immediately jumping into some Kratos and Boy action is impressive. By their nature, earbuds are lightweight and comfortable, and with their traditional shape and the three different tip sizes to choose from, the HyperX Cloud Mix Buds are comfortable to use for long sessions.

If you've used wireless earbuds at any point in the past couple of years, then the fit and form of the HyperX Cloud Mix Buds will be familiar. As will the silicon-wrapped carry case that doubles as an on-the-go charger, which stores two additional charges. The ability to store and charge more than makes up for the short-for-a-gaming-headset 10 hours you get on a single charge.

Both the left and the right earbuds feature touch controls to play/pause, skip tracks, and mute and unmute the microphone. They work as intended but are overly sensitive. The HyperX Cloud Mix Buds also feature an inline microphone, which makes them usable for both single-player and competitive multiplayer gaming. Or simply jumping into a group chat on Discord to catch up with friends.

The out-of-the-box sound is pretty good for the price, too, delivering a bass-heavy and detailed sound for USD 149.99 and AUD 199 - which is made even more impressive when you consider the dual wireless nature of the HyperX Cloud Mix Buds. But, as alluded to in the intro, the software side is spotty at best, a complete failure at worst, and potentially indicative of faults within the hardware and design.

Especially when you experience some truly strange behavior, like one earbud decided not to work or pair when battery life drops below a certain threshold.

On the PC side, all software configuration, firmware updates, and driver installation is handled by HyperX's NGENUITY program - a native Windows 10/11 app that falls apart when paired with the HyperX Cloud Mix Buds. On my AMD Ryzen 9 7900X and NVIDIA GeForce RTX 4090 desktop rig, it didn't work at all.

Hanging when trying to install drivers and update firmware, sitting there with a progress bar going nowhere. Switching over to my AMD-powered ASUS ROG Zephyrus G14, the story was the same: no ability to install drivers, update the firmware, or access any of the customizations. 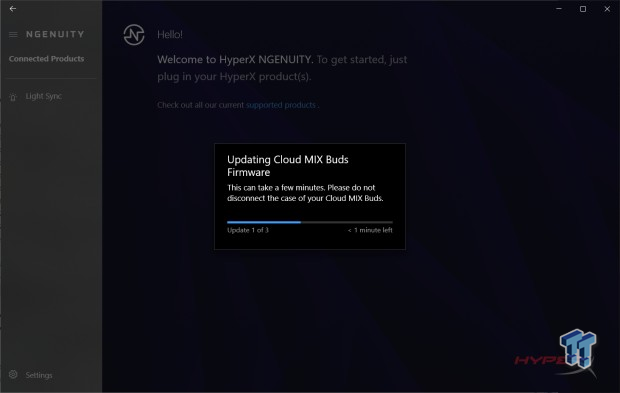 Naturally, this sort of issue found in a USD 149.99 and AUD 199 product is concerning, and it was only when I connected the dongle and case to an older Windows 10 rig that it worked. Perhaps Windows 11 was the issue, though you'd hope not. And really, trying to find the root cause of why a product you spent money on doesn't work is not a good sign. In the end, the software side of the HyperX Cloud Mix Buds ended up being the opposite of plug-and-play.

And when the actual app is limited to changing the volume (which you can do in Windows) or enabling DTS:X Spatial Sound - the disappointment stings. No EQ tinkering, no sound profiles to switch between, and no game/chat mix.

Okay, so the actual sound quality delivered by the HyperX Cloud Mix Buds is decent for the price range, tuned for gaming with a detailed high-end and pronounced low-end. They exhibit the sort of warm and rich sound associated with the HyperX Cloud range, albeit not on par with more premium earbuds. The good news is that even without being able to use HyperX's NGENUITY app in Windows 11 rig, they still work, and it was cool to be able to listen to music and fire up games whilst wearing earbuds. 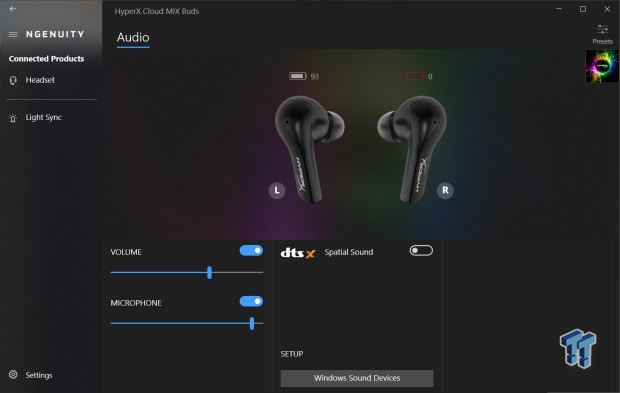 The pain lessens when you jump over to a console like the PlayStation or Nintendo Switch, and here the default tuning works well for couch or on-the-go gaming. As alluded to earlier, though, there are still quirks with the HyperX Cloud Mix Buds outside of poor software integration on PC. What happens is one earbud, the left or the right, won't work or pair seemingly at random. After using the HyperX Cloud Mix Buds for a few weeks, though, it felt like this was an issue that only cropped up during the initial pairing/powering on stage and only when the battery was low. Like, say, at around 20-30%. Anyway, having one earbud pair and not the other is another issue.

The HyperX Cloud Mix Buds feature an inline microphone, and the overall quality is decent though the volume is relatively low - so if you're a low talker like me, be prepared to have people on the other end tell you to speak up on the account of being too quiet. This is something that could have been improved potentially with software customization, but hey, you know. On the plus side, most consoles feature basic microphone level adjustments and balance, so you can end up with serviceable chat functionality, which is great for earbuds. That said, sensitive on-ear touch controls make the process of muting cumbersome.

In the end, the HyperX Cloud Mix Buds are a disappointment because, on paper, they felt like an easy win. Take the popular and comfortable wireless earbuds and add low latency 2.4 GHz wireless support with all of the benefits that come from a standard over-the-ear gaming headset. Due to the terrible software support and difficulties updating the firmware, and limited customization, you're not left with much. The HyperX Cloud Mix Buds are best used as standard Bluetooth earbuds - though that's not what they were designed to be.

HyperX is known for creating decent audio solutions for gamers, especially when it comes to products that feature the 'Cloud' branding. Here's hoping that if there's a HyperX Cloud Mix Buds V2, it fixes all of the issues because the sound quality is pretty good. And the idea of earbuds with 2.4 GHz wireless support is still a good one.