The ROG Cetra True Wireless headphones from ASUS make a great case for earbuds as a go-to for portable gaming, bolstered by great sound, a stylish design (in white), and the right price.

In the mobile audio space, the place where wireless earbuds let you listen to podcasts on your daily commute and pick and choose whether to answer the phone, Bluetooth has been the standard for some time. Even though the tech has seen major advances in recent years to improve fidelity and latency, there's a good reason Bluetooth audio hasn't infiltrated the gaming space.

Okay, so maybe infiltrated is the wrong word. Most gaming laptops have Bluetooth support, and Bluetooth peripherals tend to be good enough for most activities, but perceived latency can kill the gaming experience. And audio is one area where you notice it the most. Even the slightest delay can make things feel off. 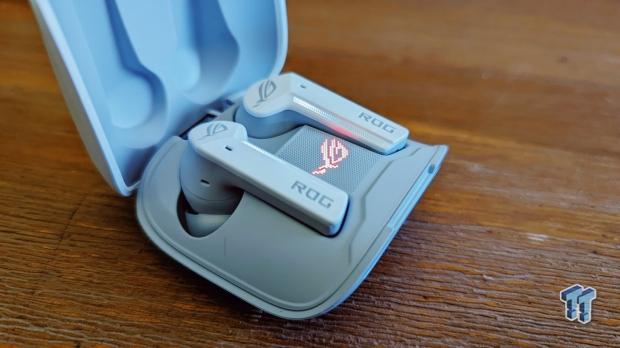 Watching a movie where the audio sync is out is like watching a bad dub. Likewise, firing a weapon in a first-person shooter and then hearing the bullets do their down-the-barrel dance a good half a second later means you're in the unplayable zone. Latency for audio is one of the reasons why 2.4 GHz wireless is what you find in most gaming headsets.

The new ROG Cetra True Wireless ANC Gaming Headphones from ASUS have gaming in the title, even though they are the sort of earbuds in the same category as AirPods. The reason for the naming, apart from coming from ASUS and its ROG brand, is that they feature a low latency 'Gaming' mode that aims to deliver an audio solution that's good enough to game with.

And with just about every device that isn't your old-school desktop PC featuring Bluetooth, this is a very good thing. From the never-ending popularity of the Nintendo Switch to the rise of the Steam Deck to playing games on Android and iOS devices. There's a lot of Bluetooth gaming to be had, and the ROG Cetra True Wireless earbuds want to be there every step of the way. 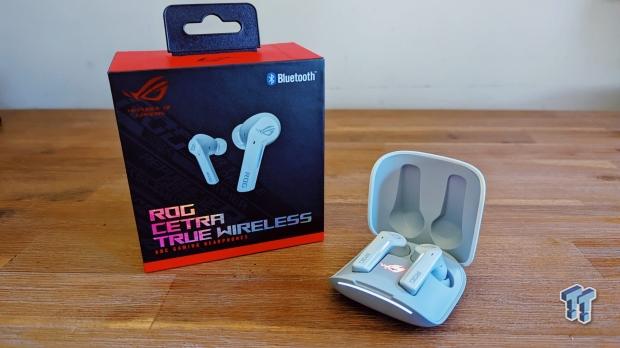 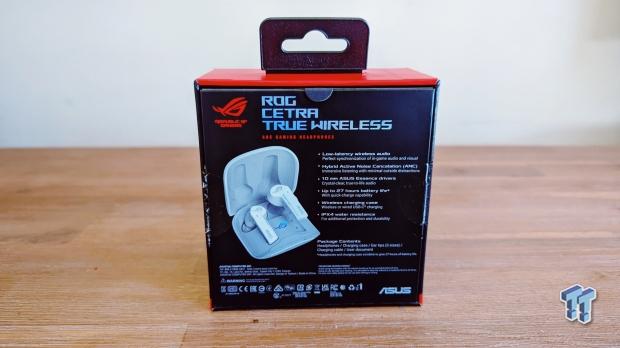 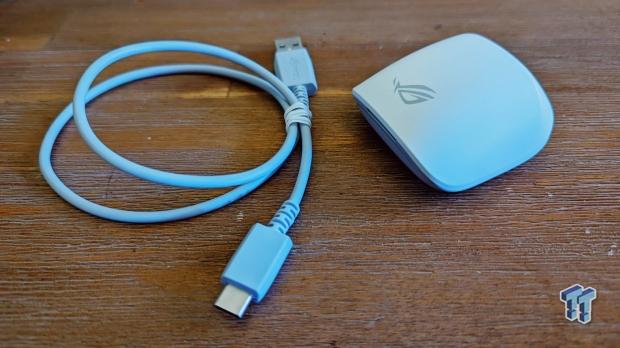 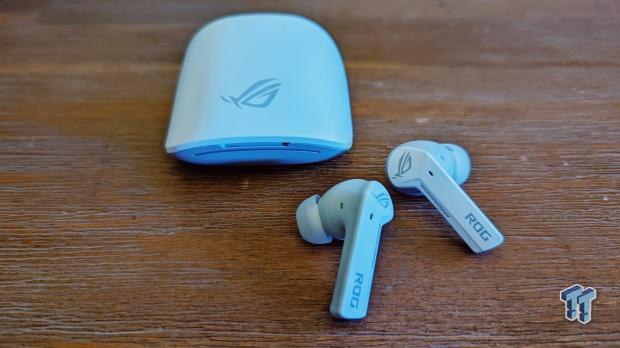 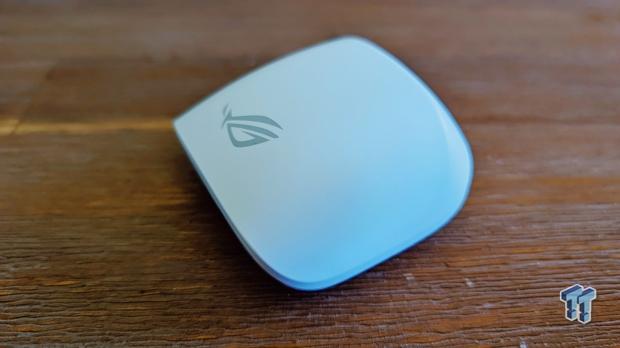 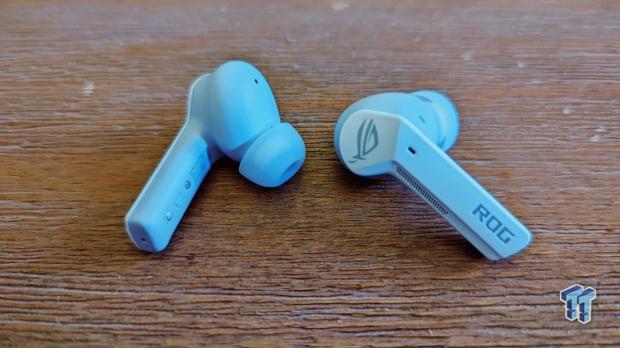 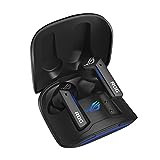 Normally gaming audio comes in a single flavor, the over-ear headphone. In-ear buds don't normally factor into the design decision-making for some reason, so it's great to see an affordable variant to the more expensive AirPods focused on low latency. That said, the ROG Cetra True Wireless earbuds are more like traditional wireless Bluetooth headphones, stylish, portable, and meant to be taken on the go.

Reviewed in the White variant, the ROG Cetra True Wireless has a stylish look that's matched by comfort. The angular ROG design meets the circular earbud shape and, from there, blends extremely well with the slick alien-pod-like charging case, which lights up with an ASCII art-style ROG logo when you open it, matching the lighting on the earbuds themselves. Very cool.

The overall fit will be familiar to anyone that has used wireless earbuds, and with that, you get the ultralight, barely noticeable earbud fit - yeah, these can be worn for hours. ASUS offers multiple ear-tip sizes too, which is great for those with a preference for smaller or larger tips. With the low-latency Gaming mode and decent ANC (Active Noise Cancellation), battery life varies but sits at around five hours with four full charges available via the charging case.

Setup is easy, and pairing the ROG Cetra True Wireless with multiple devices is straightforward, with initial testing on a Google Pixel 6 Pro and Nintendo Switch being straightforward enough that I didn't need to look up any instructions.

The ROG Cetra True Wireless earphones feature on-ear touch controls, as seen in many premium earbuds, with multiple touch points on both sides. The left earbud lets you set the ANC mode (Heavy, Light, Ambient, or Off), while the right earbud allows you to control audio and enable/disable Gaming mode. As with most touch controls, the lack of tactile feedback means it's a little clunky at first, but with audible responses for every adjustment, it doesn't take too long to get used to them.

And with on-ear controls, you don't need any sort of software to make these changes. Though on Android, there's the option of installing a mobile version of ASUS's Armoury Crate app.

Naturally, when it comes to wireless earbuds, the question of sound quality sits pretty high up on the list - and on that front, the default sound you get with the ROG Cetra True Wireless earphones has a wide, crisp and overall detailed tuning. Bass and low-end frequencies do lack finer detail, but there's a warm booming quality that pairs nicely with the mid and high-frequency detail. It's a tuning that works great for games and music alike, but it lacks the punch you might get from over-ear gaming headsets.

Tweaking audio is limited to the Armoury Crate app, and as such, limited to Android and iOS devices. This means that if you're pairing them with a Nintendo Switch or Steam Deck, you're pretty much stuck with the out-of-the-box sound. As mentioned above, that sound is pretty impressive for the most part - but it does lack a little punchiness. As for the ASUS app in mobile form, it retains the look of its Windows counterpart - which means it's kind of ugly.

In Armoury Crate, you can select from several presets tuned for various game styles - FPS, Racing, RPG - in addition to being able to tweak settings and sound with a 10-band equalizer. There's also a Virtual Surround mode, but this doesn't sound all that great. The effect is more like a "Concert Hall" reverb filter you can toggle on and off.

The final bit of adjustment is a Bass Boost, but as the bass response lacks fine detail, this simply ramps up the volume of the boomy sound versus adding any more weight. The various presets are different enough but not amazing, but the good news is that the default 'Flat' tuning suits most applications, games, and music.

Armoury Crate also offers battery life indicators for both earbuds, plus an easy way to enable and disable Gaming mode - though strangely, ANC controls are limited to touch.

Pairing the ROG Cetra True Wireless earphones with a Google Pixel 6 Pro was simple. Listening to music whilst outdoors, with ANC enabled, created the sort of music-bubble experience you crave when it comes to earbuds. This means they're a great option for any commute or even if you're of the sort that routinely visits a local gymnasium during cutting season. Which I'm told is a term used for the act of creating muscles you can see. Ahem.

Listening to music on the ROG Cetra True Wireless earphones is a wonderful experience, especially when you factor in the USD 100 and AUS 190 price points. Electronic, pop, and other beat-heavy music sounds bright and spacious, and the various ANC settings don't affect sound quality in any perceivable way.

But these are gaming headphones, and to properly test the low latency Gaming mode, I fired up the mobile version of Apex Legends. Without the 'Gaming' mode enabled, the audio delay between pressing the fire button and hearing gunshots is massive; turning it on and the latency reduction is more than impressive. It's not instantaneous, but a fast-paced FPS like Apex Legends is a true test for latency, and the ROG Cetra True Wireless earphones deliver. Switching things to Diablo Immortal and the experience is equally impressive and a great showcase for the overall sound quality thanks to Blizzard's exceptional sound effects and music.

Moving over to the Nintendo Switch and playing the likes of Super Mario Odyssey, Dead Cells, Hades, and other games that exist in the Mario universe or fall under the rogue-lite banner, you begin to see (and hear) the potential of earbuds as gaming headphones. For portable gaming, the ROG Cetra True Wireless earphones make a great case for being a go-to pair for on-the-road gaming.

As wireless earbuds, the ROG Cetra True Wireless earphones feature a built-in microphone that works like any other Bluetooth pair of headphones. The overall sound quality is very good for chatting, and the ROG Cetra True Wireless earphones do remove unwanted background noises to present a better option than using the microphone on your smartphone. There's a natural sound to vocals on both sides, which is great.

The ROG Cetra True Wireless ANC Gaming Headphones from ASUS are stylish earbuds and certainly sit in that world of headphones to take on the go and pair with multiple devices. The low-latency Gaming mode is what sets it apart. Whether playing a first-person shooter on an Android phone or firing up a vibrant colorful Mushroom Kingdom adventure on the Nintendo Switch, the results are impressive.

Best of all, the out-of-the-box sound is great, bright, crisp, and spacious. That said, the bass response does lack some finer detail compared to more premium offerings.

In the end, ASUS has hit the right note in terms of quality, pricing, and features. The ANC works well and is perfect for outdoor use, and the portable charge case is slick and small enough to fit in a pocket. Charge time is quick, too, storing multiple charges that will last multiple days, even with heavy use.

Ultimately, using these with the Nintendo Switch sells the idea of gaming earbuds as the most comfortable and natural option for portable gaming. So much so that I can't wait to pair these with the Steam Deck when Valve finally decides to officially launch its PC handheld in Australia.

The ROG Cetra True Wireless headphones from ASUS make a great case for earbuds as a go-to for portable gaming, bolstered by great sound, a stylish design (in white), and the right price.