NASA explains on its blog that Webb's Near-Infrared Camera (NIRCam) was used to capture the incredible image, and by using infrared, NASA is able to identify many more newly formed stars, along with more precise estimations for the amount of gas and dust within the region. The space agency explains that newly formed stars steal the show in the below image, which can be identified by their diffraction spikes. 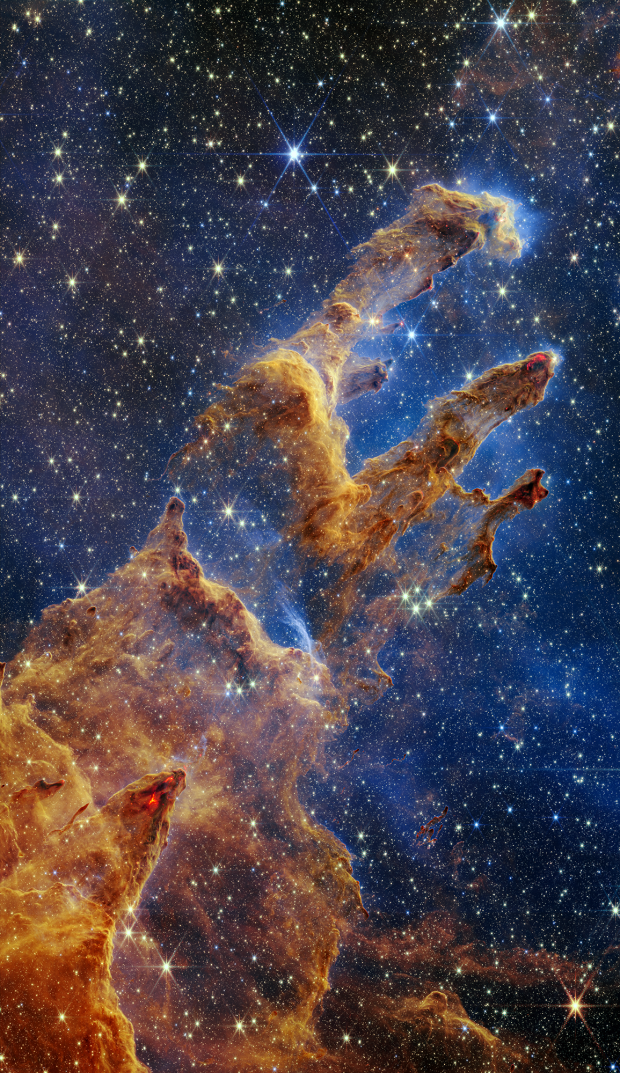 The Pillars of Creation taken by the James Webb Space Telescope.

Furthermore, NASA explains that the wavy lines that are seen at the edges of some of the pillars are supersonic ejections from young stars that are still forming within the gas and dust. Occasionally these ejections hit the clouds of dust and gas, which sometimes causes a bow shock, resulting in a wave pattern forming much like a boat moving through water.

"This is evident in the second and third pillars from the top - the NIRCam image is practically pulsing with their activity. These young stars are estimated to be only a few hundred thousand years old," writes NASA.

NASA writes that Webb's near-infrared instruments typically allow the space telescope to pierce through cosmic clouds such as these to reveal large quantities of galaxies behind the initial target. However, there is a mixture of translucent gas and dust called the interstellar medium located in the densest location of our Milky Way galaxy, and that is preventing NASA's newest telescope from looking deeper into the universe.

In other science news, researchers have observed the brightest flash of light ever in an event that was described as "once-in-a-century". An astronaut aboard the International Space Station (ISS) has snapped a phenomenal image of two blue blobs in Earth's atmosphere. More on that story can be found below.