An astronaut aboard the International Space Station (ISS) has snapped a phenomenal image of two blue blobs of light hovering in Earth's atmosphere. 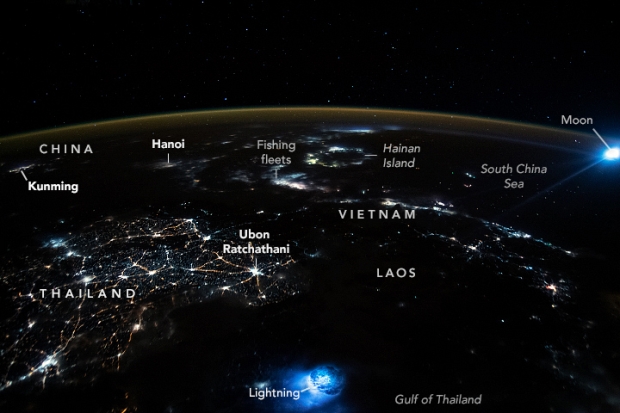 The International Space Station (ISS) orbits Earth at an altitude of approximately 250 miles, giving the astronauts aboard the floating laboratory a fantastic vantage point to view Earth from. While passing over Southeast Asia, approximately near the Vietnamese coast and Thailand, an ISS astronaut snapped an image that showcases two unrelated natural phenomena happening to occur at the same time.

The blob of blue light seen at the bottom of the photograph is a very large lightning strike that happened over the Gulf of Thailand. Seeing lightning strikes happen from 250 miles up is typically quite difficult, but this lightning strike seemed to have occurred within a gap in the clouds that were also located fairly high up. The strike itself illuminated the clouds, which created the incredible blue color that is seen in the image.

In other science news, famous astrophysicist Neil deGrasse Tyson has explained NASA's recent Double Asteroid Redirection Test (DART) and the benefits of such a mission. Additionally, deGrasse Tyson explained the implications of the mission's success and what that means for Earth's protection in the future. For more information on that story, check out the below link.