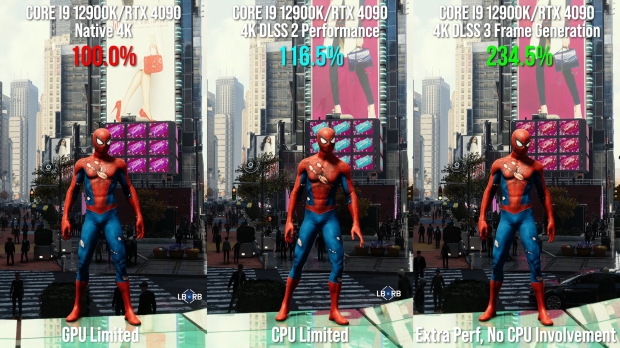 Digital Foundry has already played around with Cyberpunk 2077 and its update that will usher in Overdrive RT + DLSS 3 support, but also early drivers to the GeForce RTX 4090. The team at DF posted an article and large 30-minute video, showing off DLSS 3 with side-by-side comparisons in Marvel's Spider-Man Remastered against DLSS 2 and native 4K.

The way NVIDIA's new Ada Lovelace-powered DLSS 3 technology works by generating full frames based on game data like motion vectors and optical flow analysis, as explained as Digital Foundry in the video below. Extra latency is introduced by buffering frames, but NVIDIA's in-house Reflex technology baked into DLSS 3 effectively solves that. The frametimes with DLSS 3 are higher than DLSS 3, but it's limited testing, early drivers, early everything.

I'm a gigantic fan of 4K 120FPS+ gaming and personally have been gaming at 120FPS for longer than I can remember (since the late 90s) but we're finally getting to the point hardware wise with the RTX 4090 -- and software wise with DLSS 3 -- where 4K 120FPS everywhere is here. It's not close, because with DLSS 3 you're not going to have trouble it seems hitting 4K 120FPS+ in any title no matter how good it looks, if it has DLSS 3 you're going to pump 4K 120FPS+ with an RTX 4090.