NVIDIA has just announced its next-gen Ada Lovelace GPU architecture and out of the box, we have the announcement of NVIDIA's next-gen AI upscaling technology: DLSS 3.

DLSS 3 launches with Ada Lovelace, with NVIDIA promising FPS boosts of up to 4x with DLSS 3 enabled. NVIDIA's new DLSS is the next evolution of neural graphics, which combines DLSS Super Resolution, all-new DLSS Frame Generation, and NVIDIA Reflex, running on the new hardware capabilities of GeForce RTX 40 Series GPUs. 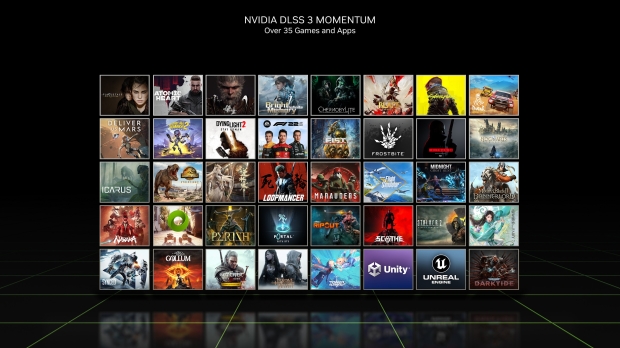 DLSS 3 is already supported by 35 games and apps, with more on the way

NVIDIA's new DLSS 3 offers up to 4x performance "over brute-force rendering" with DLSS 3 already adopted into the gaming ecosystem, with over 35 games supporting DLSS 3 and much more on the way. DLSS 3 is powered by the 4th Gen Tensor Cores and Optical Flow Accelerator inside of the NVIDIA Ada Lovelace GPU architecture, which is inside of the new GeForce RTX 40 series graphics cards.

Jensen Huang, founder and CEO of NVIDIA explains: "DLSS is one of our best inventions and has made real-time ray tracing possible. DLSS 3 is another quantum leap for gamers and creators. Our pioneering work in RTX neural rendering has opened a new universe of possibilities where AI plays a central role in the creation of virtual worlds".

NVIDIA explains Ada Lovelace's new Optical Flow Accelerator: "Ada's Optical Flow Accelerator analyzes two sequential in-game frames and calculates an optical flow field. The optical flow field captures the direction and speed at which pixels are moving from frame 1 to frame 2. The Optical Flow Accelerator is able to capture pixel-level information such as particles, reflections, shadows, and lighting, which are not included in game engine motion vector calculations. In the motorcycle example below, the motion flow of the motorcyclist accurately represents that the shadow stays in roughly the same place on the screen with respect to their bike". 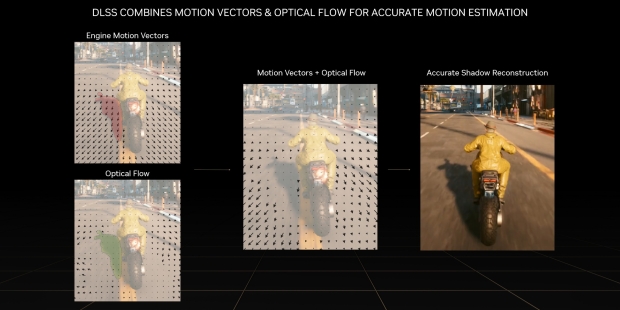 For each pixel, the DLSS Frame Generation AI network decides how to use information from the game motion vectors, the optical flow field, and the sequential game frames to create intermediate frames. By using both engine motion vectors and optical flow to track motion, the DLSS Frame Generation network is able to accurately reconstruct both geometry and effects, as seen in the picture below". 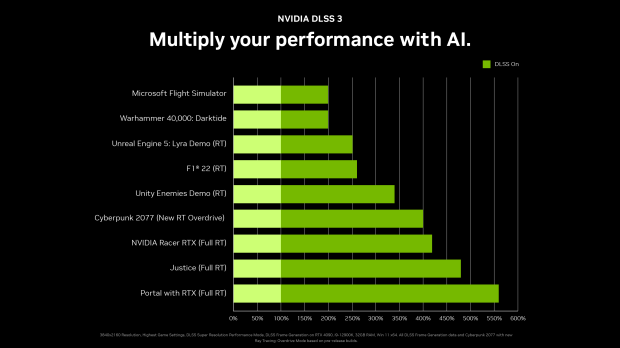 DLSS 3 is all about injecting more performance, and man... Ada Lovelace really delivers. DLSS 3 with Microsoft Flight Simulator at 4K on the highest in-game settings with DLSS 3 set to "Performance" mode offering 2x the performance. NVIDIA is using an Intel Core i9-12900K processor, and 32GB of RAM for this testing.