We know that NVIDIA has a silicon monster with its flagship new GeForce RTX 4090 graphics card, built for 4K gaming and beyond -- and when we say beyond, we mean 8K gaming -- which the RTX 4090 is tuned perfectly for.

First off you've got an unbelievable amount of GPU horsepower with the AD102 GPU inside of the GeForce RTX 4090, joined by a large 24GB framebuffer, with super-fast GDDR6X memory with 1TB/sec+ of memory bandwidth at your disposal. 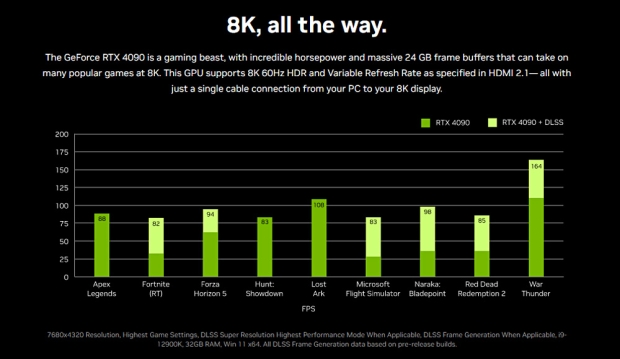 But in a new post on NVIDIA's own landing page for 8K HDR gaming on its website, the company explains that the GeForce RTX 4090 lets you play, capture, and watch 8K HDR. If you don't know how good 8K is, it's 4x as many pixels as 4K and 16x as many pixels as 1080p.

I've been benchmarking and testing the crazy future-gen 8K resolution on GPUs for years now, recently testing Marvel's Spider-Man Remastered which NVIDIA's current-gen GeForce RTX 3090 Ti smashed through... but the RTX 4090... oh boy, that's going to be some fun to play with.

NVIDIA says "8K, all the way" because it's new GeForce RTX 4090 is a "gaming beast" with incredible horsepower and the huge 24GB GDDR6X means it can take the very latest games on the market, and run them at 8K. NVIDIA's new GeForce RTX 4090 supports 8K 60Hz HDR and Variable Refresh Rate (VRR) through HDMI 2.1 -- allowing single-cable 8K goodness to your PC.

But you see my dear readers, therein lies an issue I have with NVIDIA's next-gen Ada Lovelace GPU architecture: there's no native DisplayPort 2.0 connectivity, which is capable of driving 8K60, 8K120, 4K120, and 4K240 resolutions and future displays. 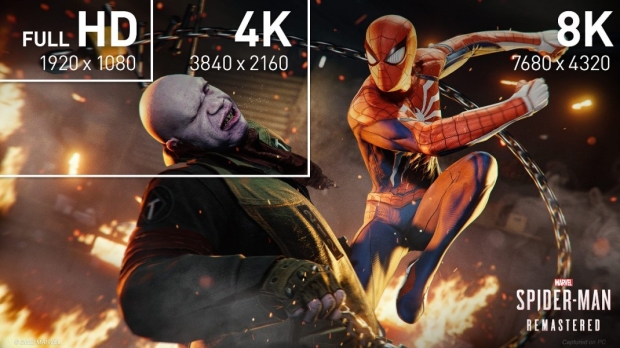 DP2.0 should've been on the GeForce RTX 4090 and other GeForce RTX 40 series GPUs, but I guess NVIDIA didn't feel the need for the latest display connectivity. HDMI 2.1 is all we've got, folks. DisplayPort 1.4 connectors are still here, but you'll need not one, but two of them for 8K 60Hz HDR on the PC. 8K TVs can only be run through HDMI 2.1 connectivity.