AMD's next-gen Ryzen 7000 series "Zen 4" CPUs are expected to pack quite a few surprises, but we're now hearing about second-generation V-Cache and that Zen 4 V-Cache CPUs will be 30% faster than standard Zen 4 CPUs. These CPUs should be what will eventually turn into the Ryzen 9 7950X3D and Ryzen 7 7800X3D processors, with second-gen AMD 3D V-Cache. 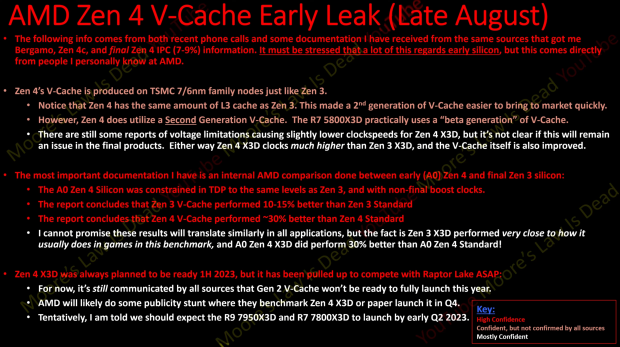 In a new video, Moore's Law is Dead says that after talking to some of his sources, that Zen 4 is packing second-generation V-Cache, succeeding the first-gen 3D V-Cache that AMD used on its Ryzen 7 5800X3D processor. The new second-gen V-Cache is expected to provide 30% more performance over a regular Zen 4 processor, which would be bloody awesome.

AMD delivered around 10-15% more performance with Zen 3 V-Cache over the regular Zen 3 CPUs -- the Ryzen 7 5800X3D and Ryzen 7 5800X in this case -- while MLID reports that he has internal AMD comparison that the company did between early Zen 4 (A0) chips and final Zen 3 silicon. 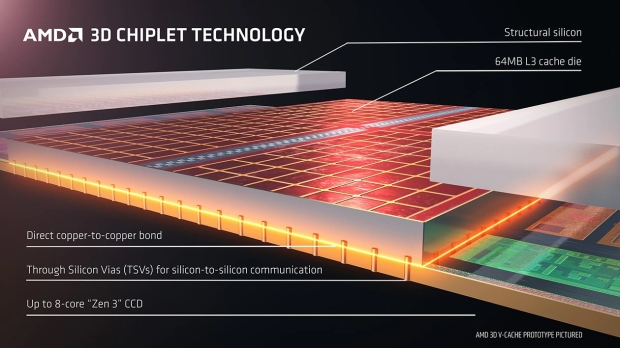 AMD will be launching its regular Zen 4 processors next month, but the new Zen 4 V-Cache CPUs won't launch until 2023. We should expect some form of an announcement or tease from AMD about its upcoming second-generation V-Cache, especially with Intel about to launch its new 13th Gen Core "Raptor Lake" CPUs.

We'll have to wait and see how these rumors mature in the coming months, but if you think AMD is sitting on its hands with 3D V-Cache and not preparing Zen 4-based CPUs based on a second-generation version of the technology...