AMD will be talking to its partners on August 5 about its next-gen Ryzen 7000 series CPUs and new enthusiast-grade X670E motherboards. 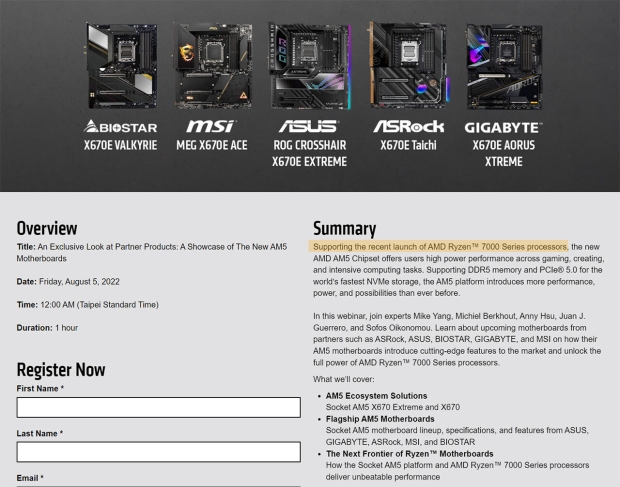 The company teased its upcoming "Exclusive Look at Partner Products: A Showcase of The New AM5 Motherboards" for business partners and customers who are eager to learn more about AMD's next-gen products, taking place on August 5 at 12:00 AM Taiwan time (9 AM PT). We should expect the Zen 4 + X670E launch shortly after.

It seems that there are a lot of... let's just say convenient leaks about AMD's new Zen 4 products (including the next-gen 600-series motherboards) over the last few months. This is another one of those leaks, but it doesn't matter... we know it's coming, and it's coming real soon.

The summary of the event explains "supporting the recent launch of AMD Ryzen 7000 Series processors, the new AMD AM5 chipset offers high power performance across gaming, creating, and intensive computing tasks. Supporting DDR5 memory and PCIe 5.0 for the world's fastest NVMe storage, the AM5 platform introduces more performance, power, and possibilities than ever before".

"In this webinar, join experts Mike Yang, Michiel Berkhout, Anny Hsu, Juan J. Guerrero, and Sofos Oikonomou. Learn about upcoming motherboards from partners such as ASRock, ASUS, BIOSTAR, GIGABYTE, and MSI on how their AM5 motherboards introduce cutting-edge features to the market and unlock the full power of AMD Ryzen 7000 Series processors".