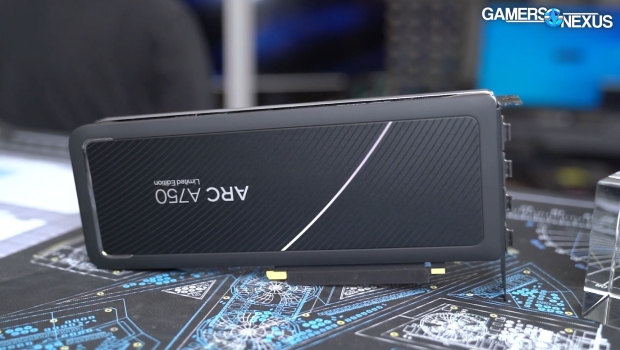 Gamers Nexus have been sent over the new Intel Arc A750 Limited Edition graphics card, but haven't done much with it at all. VideoCardz incorrectly reported that GN was reviewing the card, but Gamers Nexus explained in a tweet that a "review isn't "already in the works." We said we ran some benchmarks on it (when an engineer visited), but we aren't reviewing it yet".

It seems Intel marketing is running GPUs into the hands of who they think matters... with PC Perspective's previous EIC and owner -- now working at Intel -- Ryan Shrout with the first GUNNIR Arc A380 Photon 6G OC graphics card in the US. Now, we have Gamers Nexus with an unreleased Intel Arc A750 Limited Edition graphics card. This must be the start of the Odyssey.

We have no idea when Intel will be launching its new Arc A750 Limited Edition graphics card, but we should expect to see it debut in China first, following Intel's other Arc (mobile and desktop) GPU launches. As for the Intel Arc A750 graphics card itself, it uses the ACM-G10 GPU with 24 Xe-Cores (32 Xe-Cores max from the ACM-G10 GPU).