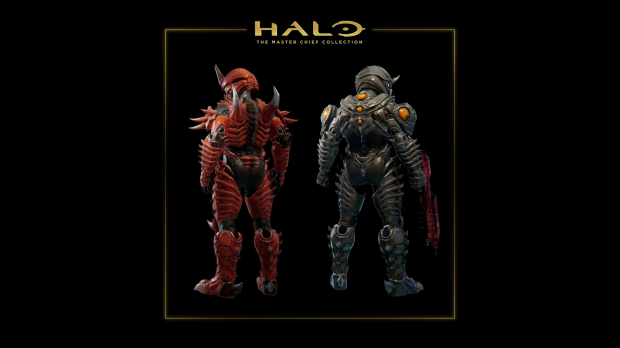 In what can be aptly described as an identity crises, Halo is getting more non-canon armor sets that seem to borrow from other Microsoft franchises. 343i today revealed a sneak peek at MCC armor skins that look like they're borrowed right from Doom.

Similar to the cool-but-extremely-unfitting Greek and Norse mythology armor sets, the new demon skins are quizzical additions to the Master Chief Collection. According to 343i, the new skins aren't demonic, but are called "bioroid" and more like Guyver than Doomslayer. The armors are usable in Halo 2 Anniversary and may roll out with the new Spartan Points microtransaction store coming to MCC (yes, 343i is adding microtransactions to the Master Chief Collection).

"Some examples of new content coming are new 'bioroid' themed Halo 2: Anniversary armor sets, post-match poses, you'll be able to customize the background video in the menu, mod support for Halo: Reach (with Halo 4 and Halo 2: Anniversary in the works for the future), and the Career hub will be getting a nice new coat of paint," 343i's Alex Wakeford said in the update post.

Halo MCC is also moving away from "seasons" and will introduce what they call "series," which are presumably smaller-scale updates that are accompanied by tangential mTX values in the in-game store.