Samsung says that its new 32-inch Odyssey Neo G8 gaming monitor is the "world's first and fastest gaming monitor" that rocks a 1000R curved VA panel featuring Quantum Matrix Technology. The buzzwords, they get me everytime. Whoooooooooooosh: QUANTUM MATRIX TECHNOLOGY. Marketing jokes aside: this is a serious god damn monitor, with 4K @ 240Hz you're going to need a next-gen GPU to run games at 4K 240FPS. Maybe even a generation ahead of that.

Hyesung Ha, Executive Vice President of Visual Display Business at Samsung Electronics said: "Samsung is excited to unveil the world's fastest 4K gaming monitor to unlock even more opportunities and deliver innovation to the market, creating a new and incredibly immersive experience. Gamers ultimately desire that immersive experience in unity with their character and scene, and the Odyssey enables this with superior features and lifelike picture quality to give players a thrill". 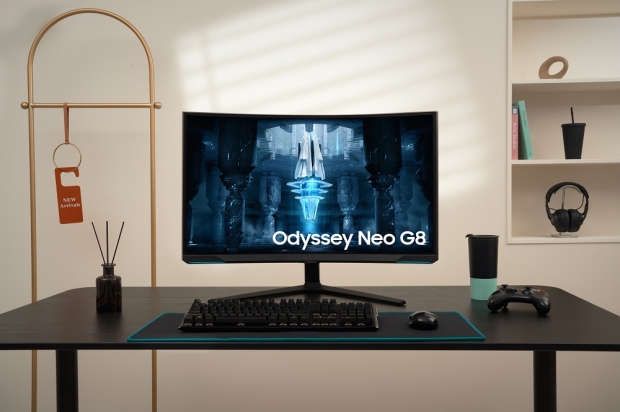 Samsung is using a new display technology called Matte Display, that has both anti-glare and anti-reflection protection. This will keep your screen more free from glares and other annoyances when you're in the middle of gaming, or working on the Odyssey Neo G8 gaming monitor.

There's also a height adjustable stand, with both swivel and tilt functionality -- and if you're got a monitor arm, there's VESA mounting capabilities here -- Samsung's new Odyssey Neo G8 gaming monitor has it all.