NASA's Perseverance Mars rover spotted a dust devil swirling across the surface of the Jezero Crater on July 20th, 2021.

On this date, the rover was on the 148th Martian day, or sol, of its mission. It took photos of the dust devil using its Navigation Camera, about 15 seconds apart, to produce this animation. According to NASA, the GIF has been enhanced to "show maximal detail," at the expense of some of the colors being distorted.

The Navigation Cameras, or Navcams, are the eyes of the rover, and primarily aid in autonomous navigation. They are mounted on the rover's mast, separated by about 16.5 inches (42 centimeters). They comprise two of nine engineering cameras, which along with seven science cameras, and seven entry, descent and landing cameras, make up the 23 total cameras onboard the Perseverance rover.

Perseverance is currently on the way to the delta near Hawksbill Gap, where it will collect more rock core samples to add to its current collection of eight. For more information on Perseverance's current status, check out the NASA's mission updates here. 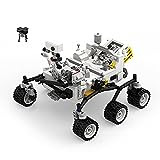