In some of the latest rounds of rumors, we've been hearing whispers that NVIDIA would unleash the GeForce RTX 40 series GPUs sooner rather than later -- a possibly mid-July release -- meaning we're just months away. NVIDIA looks to be providing some rather impressive cooling array to the RTX 40 series Founders Edition GPUs so that they can handle the 450W to 600W of power we're also hearing about.

NVIDIA's new GeForce RTX 4090 Ti (this name could change) Founders Edition graphics card has three different parts: first up we have the silver-themed metal skeleton that goes around the heat sink for that beautiful finish. You can see the nice little "RTX 4090 Ti" logo there, too.

You can see that the heat sink has been upgraded massively, with a larger baseplate that looks like it'll be cooling the GPU and GDDR6X (or possibly GDDR7) memory dies. NVIDIA has been using thermal pads for the memory dies until now -- including the new flagship RTX 3090 Ti, and previous RTX 3090. 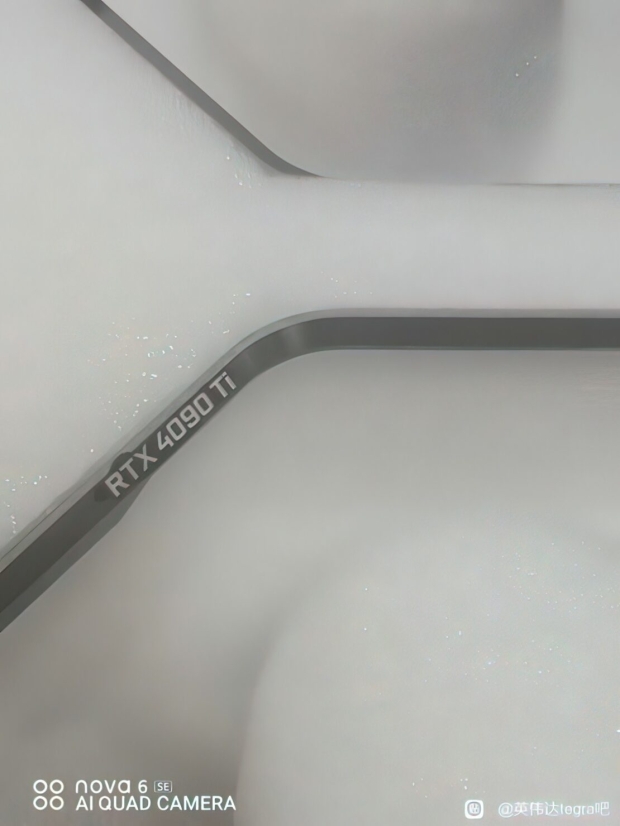 This new heat sink layout lets NVIDIA cool at least 12 x GDDR6 memory chips, so with the huge cooling system that makes sure the GDDR6X memory chips are individually cooled, it must be required. The VRAM must be running hot (we know it does) and NVIDIA doesn't want issues with thermal complaints on the super-fast GDDR6X memory.

NVIDIA's purported GeForce RTX 4090 Ti Founders Edition also finds itself being a chunky boi, coming in at a 3-slot, or possibly even a 4-slot design. We'll know more in the coming months, but just recently we heard the new RTX 4090 is twice as fast as the RTX 3090 for only 100W more power (450W vs 350W).