NVIDIA's next-gen GeForce RTX 4090 will come and blow our socks off later this year, powered by the new Ada Lovelace GPU architecture, but now there are some massive predictions of the RTX 4090 performance... and wow. 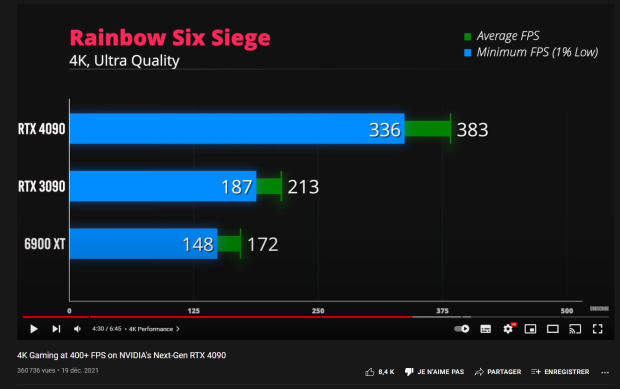 In a new tweet, 3DCenter.org answers itself in the question that the earliest that NVIDIA could test out 12 games on its next-gen GeForce RTX 4090 graphics card would be "sometime in the summer of 2022". The tweet continues, noting that NVIDIA has to do a few things first: AD102 tape out, AD102 validation, real boards in the wild, working clock rates (Ada Lovelace GPU clocks will be much higher than Ampere GPU clocks), and then great drivers.

A video posted in December 2021 from all of the gathered leaks and rumors of the GeForce RTX 4090 has it pegged for some serious 4K gaming powerhouse performance, but we've already heard the rumors of the new RTX 4090 being 100% faster than the RTX 3090... but in a chart, man-oh-man, does it look good. 4K gaming at 400FPS in games like Rainbow Six: Siege... nearly 100FPS at Ultra settings in Cyberpunk 2077... yeah.

Now, to be brutally clear -- these are totally BS numbers as there's no GeForce RTX 4090 prototype hardware, let alone drivers to run games so efficiently -- thrashing the pants off of Ampere and RDNA 2 flagship GPUs. But, we do know that we should expect up to -- and around -- double the performance of the RTX 3090 with the new RTX 4090, so are these numbers so far out of the ballpark?