The drone deliveries mark the first of its kind to deliver food and beverage at a sporting event. 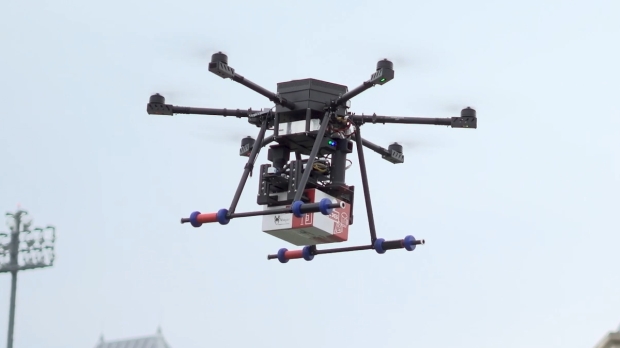 Purdue University in West Lafayette, Indiana, hosted a baseball series at Alexander Field recently where attendees could order food and drink items that were then delivered to a locker at the venue. The pilot program was designed to "pressure-test the delivery experience for higher fan volume at future events," and you can see footage of the drone in action here.

The program was run by a collaboration between Purdue's concessionaire, Levy, Levy's DBK Studio, Valqari, which utilized its patented six-locker Drone Delivery Station, and the Unmanned Systems Operation Group (USOG). Valqari worked with USOG to map out the flight path, which carried orders prepared and fulfilled at the Folk Field to Alexander Field, roughly half a mile away.

The flight took about 90 seconds, with orders being fulfilled in about four minutes overall when factoring in loading deliveries onto the drone and concession workers grabbing orders out of the drone delivery box to place in secure lockers for fans to collect. The DBK Studio team believes they could achieve up to 45 combo meal deliveries per hour with the drones in perfect weather conditions.