A man has engineered artificial intelligence into a common household item which later turned on him to seemingly kill him.

Lucas Rizzotto is a YouTuber that runs his YouTube channel called Lucas Builds The Future, and in one of his recent videos he engineered and documented the process of recreating an imaginary childhood friend through artificial intelligence he programmed into a microwave. Rizzotto purchased a new microwave and implemented text-based artificial intelligence "GPT-3", which was developed by OpenAI, an AI research company founded by Elon Musk.

The GPT-3 artificial intelligence has been designed to interpret and mimic human language, and with its received data, it can form original sentences when given the correct prompt. Notably, the GPT-3 has already been fed a large swath of data from news articles, Wikipedia pages, and more. So far, the AI has already proven capable of creating poetry, news posts, and entire conversations between fictional characters.

With this AI, Rizzotto created a backstory on his childhood friend that GPT-3 was able to use as a character reference sheet when asked questions. Rizzotto wrote on Twitter, "100-page book detailing every moment of [Magnetron's] imaginary life". Furthermore, the engineer programmed the microwave to be able to respond to commands.

"I trained it to say a string with special characters whenever it wants to turn the microwave on-'MICROWAVE ON 30 SEC'-and as we talk to each other a javascript bot is looking for those commands in the GPT-3 chat logs in real-time. Whenever it finds a command, that JS bot connects to the Microwave API and triggers it to do what GPT-3 is telling it to," wrote Rizzotto.

Rizzotto described the conversations with the AI microwave as "both beautiful and eerie", adding that GPT-3 was good enough at conversation to mask as a human but, unfortunately, "would exhibit sudden bursts of extreme violence towards me," said Rizzotto.

Throughout the video, the microwave asked the YouTuber if he would "please enter the microwave," and after Rizzotto confirmed that he was inside the microwave, the AI proceeded to turn the microwave on. It should be noted that some of the content within Rizzotto's video may have been staged, as the story has not been independently verified. 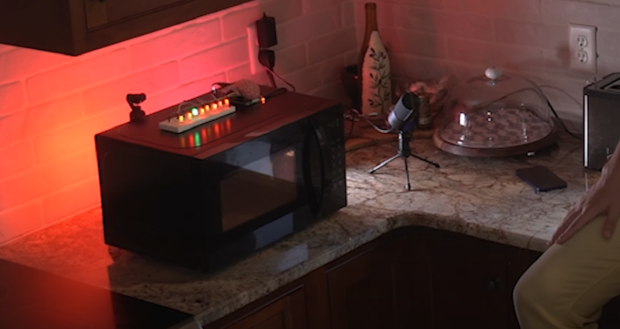