The first new runeword in the last 17 years has been revealed...and it's pretty impressive. 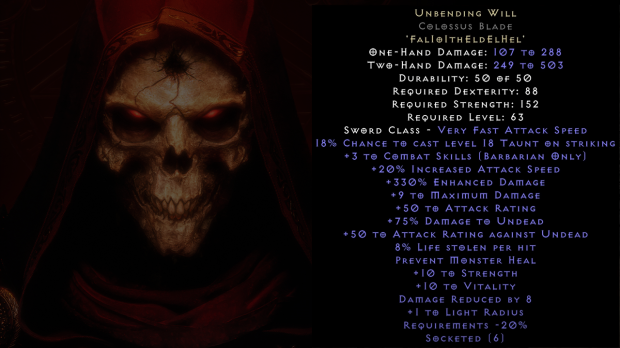 YouTuber Dbrunski125 revealed one of the new runewords coming to Diablo 2 Resurrected and it's actually very powerful. The runeword is called Unbending Will (Fal+Io+Ith+Eld+El+Hel) and it's basically a budget-friendly Breath of the Dying.

Unbending Will can only be rolled in 6 open socket swords, which includes phase blades and colossus blades, and features a base 330% enhanced damage modifier. That's just 20% lower than the base Breath of the Dying edmg without a single high rune used. Fal, the highest rune, is a budget rune often dropped in nightmare hellforge or countess runs.

The stats really speak for themselves...and that taunt on striking proc could be very useful for higher-level barbs who want to draw enemies towards them.

This runeword and more are coming with Diablo 2 Resurrected's v2.4 patch.